The mother of suspected Reading terror attacker Khairi Saadallah says he should have been in a mental health unit, as it emerged he was on the Government’s deradicalisation scheme.

Saadallah, 25, is in police custody and is being questioned over the horrific knife attack in Forbury Gardens, Reading on Saturday evening, which left three dead and another three seriously injured.

Now, his family claim he was let down by the system with official documents revealing he had been diagnosed with post-traumatic stress disorder, depression and an emotionally unstable personality disorder.

His mother, from the family home in Tripoli, Libya, claims that ‘something somewhere has gone wrong’ and has called on an investigation into her son’s contact with mental health professionals before Saturday’s attack.

It also emerged last night that the 25-year-old Libyan refugee had been involved in the government’s Prevent deradicalisation programme.

He was reportedly assessed by officials in the programmer, which aims to stop at-risk individuals of becoming terrorists.

According to the Times, Sadallah was not considered to be a threat by Prevent officials.

It comes as his cousin, who was by the side of his mother yesterday, translated her words and told the Telegraph:  ‘She is worried about Khairi and the direction this investigation seems to be taking. She is saying: ‘He is on medication. His mental health has deteriorated since Ramadan. He couldn’t sleep, he had nightmares. He had asked me to pray for him’.

‘She said: ‘Why was he out on the streets and not in a mental health centre?’ Last time she spoke to him, she said: ‘Why don’t you come home to us?’ but he said he had made up his mind, this is the country he wanted to live in.’

The family also revealed that Saadallah had a privileged upbringing in a wealthy suburb of Tripoli, where he attended private school, enjoyed regular holidays and went to summer camps.

He has four brothers and four sisters, all regular travellers who spend time a lot of time in the UK.

Saadallah, according to his family, moved to the UK because he liked the way of life and wanted to live ‘freely’ and in peace.

He was very ‘westernised’ his cousin insisted last night.

She added: ‘He needed mental health care, they all knew that.’ 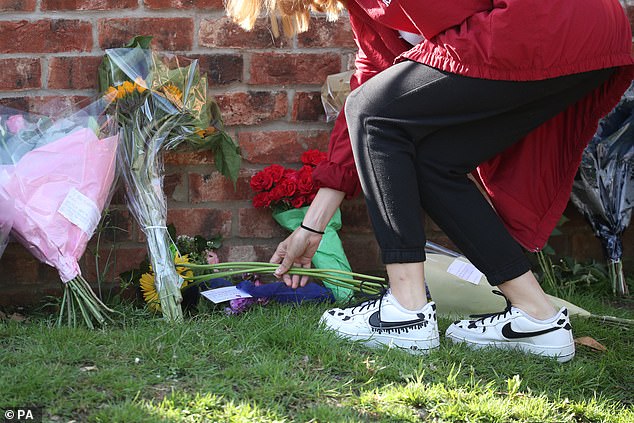 Flowers are placed at the entrance to the Holt School, Wokingham, Berskhire, in memory of teacher James Furlong, a victim of the terrorist attack in Forbury Gardens, Reading, on Saturday in which three people died 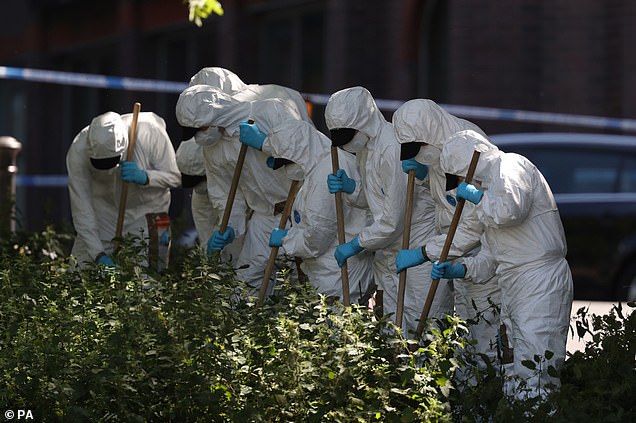 Police forensics officers at work near Forbury Gardens, in Reading town centre, the scene of a multiple stabbing attack which took place at around 7pm on Saturday, leaving three people dead and another three seriously injured

It comes as it was revealed that police intercepted the Reading terror suspect on the street just hours before he allegedly went on the rampage.

A specialist mental health team was asked to search for Saadallah after officials failed to find him during a routine check at his home last Friday.

Later that evening, just before midnight, he was found on a street in Reading, sources disclosed.

Saadallah is believed to have then been taken home to his council flat in the south of the town – and just hours later is alleged to have stabbed three men to death as they sat in a local park, Forbury Gardens.

Several police and psychiatric nurses, known as a ‘street triage’ team run jointly by Thames Valley Police and the NHS, encountered the 25-year-old Libyan after an alert was raised as part of his psychiatric care, sources said. 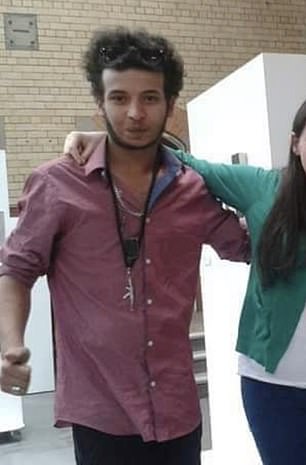 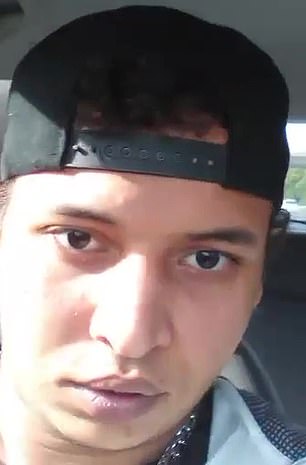 A relative of Khairi Saadallah (pictured), 25, says the terror suspect arrived in the UK as a tourist in 2012 before claiming asylum because he was at risk from Islamic extremists due to him not leading a ‘strict religious life’ in Libya

Meanwhile, light has been shone on the fact the number of people on an MI5 watchlist has risen by thousands in recent years.

It said as soon as MI5 judged an SOI no longer posed a threat, that SOI was downgraded and placed in a ‘closed’ category called Closed Subject of Interest (CSOI).

‘This does not mean these SOIs will never pose a threat again, but merely that their current level of threat is not judged to be sufficient to prioritise allocating investigative resource against them,’ the report said.

The report said: ‘A substantial element of the increase to over 40,000 is the inclusion of individuals who have never travelled to the UK but whose details have been passed to MI5 by foreign intelligence services, in order that MI5 be alerted should they enter the UK.

‘This new figure is not, therefore, directly comparable to the previous 20,000 figure and it does not mean there are now over twice as many CSOIs at risk of re-engagement.’

‘Nevertheless, by its very nature, the CSOI figure will always increase year on year.

‘MI5 is constantly opening new investigations into individuals who come to its attention and then closing SOIs when it is confident it has mitigated any threat they pose.

‘Individuals generally remain in a CSOI category unless they re-engage in terrorist activity (in which case they are moved back into a priority investigation), or until a substantial amount of time has passed.

‘This inevitably means that more individuals enter the CSOI pool than leave it.’

As counter-terror officers investigate, mental health is understood to be considered a major factor in the attack.

It came as a former Labour justice minister revealed in the Commons that Saadallah had been released from prison just 16 days before being arrested over the terror attack.

Maria Eagle said: ‘The person who has been arrested suspected of these offences has been reported as being of interest to the security services as a potential terrorist sympathiser and was released well before the end of his sentence from a prison – a mere 16 days before this murderous rampage took place.’

Home Secretary Priti Patel said she was unable to comment given the police investigation, but it will raise further concerns that the authorities missed opportunities to prevent Saturday’s knife attacks.