Khashoggi killing: Was writer killed in botched attempt to kidnap him?

Did spies kill Jamal Khashoggi after botching attempt to kidnap him and send him back to Saudi Arabia? New questions arise over accepted wisdom of journalist’s killing

Saudi journalist Jamal Khashoggi may have been killed in a botched attempt to kidnap him and bring him back to Saudi Arabia, it has been suggested.

The columnist went missing on October 2 in the Saudi consulate in Istanbul, where Turkey believes he was killed and then dismembered with a bone saw.

Top Saudi officials are suspected of ordering an assassination, but writing in The Atlantic Graeme Wood has posed new questions about the case.

Jamal Khashoggi, pictured in 2014, went missing in the Saudi consulate in Istanbul on October 2, and is believed by Turkish investigators to have been killed and dismembered there

A deliberate killing in the Saudi consulate would have been unusual, as it was sure to attract attention when Khashoggi could have been eliminated in a more ‘deniable’ way, he said.

He also suggested that a ‘kill mission’ would not have needed so many Saudi operatives.

Staging the ambush in the consulate would make more sense if the operation was meant to be a ‘rendition’, he said.

‘You can’t render someone from a cafe; you need a setting over which you have total control. Sedatives are an odd way to kill someone, but they are the only way to bring him home alive against his will,’ he wrote.

He also suggested that Riyadh’s ‘pathetically clumsy’ response to the killing suggested they had not been prepared for what happened in the consulate.

The killing has severely strained Saudi Arabia’s relationship with its Western allies, some of whom have imposed sanctions. 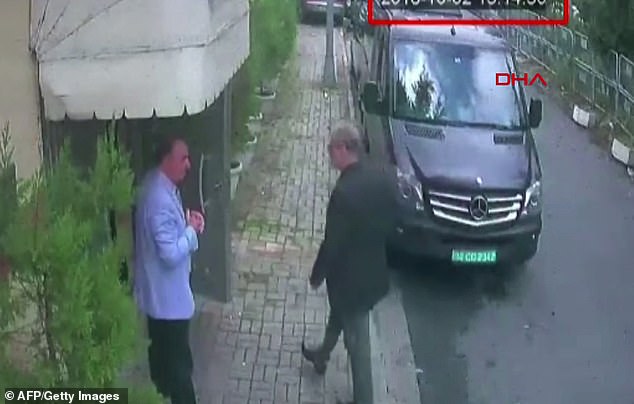 Khashoggi is seen alive for the last time when he enters the Saudi consulate in Turkey on October 2. Many have pointed the finger at the Gulf kingdom’s Crown Prince over his death 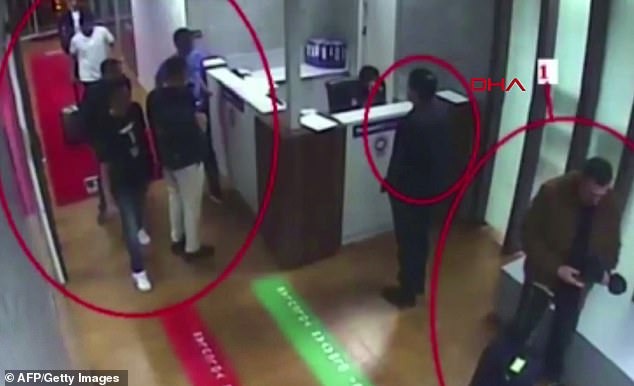 Suspects: Members of the alleged Saudi hit squad are seen at an Istanbul airport on October 2

Saudi Arabia’s Crown Prince and de facto leader Mohammed bin Salman has come under suspicion over his possible role in the killing.

Findings from the CIA suggested that the prince’s subordinates could not have carried out the operation without his knowledge.

But U.S. President Donald Trump has equivocated over who is to blame for the killing.

His outgoing defense secretary James Mattis has said there was ‘no smoking gun’ making the connection to the prince.

The journalist, who had lived for a time in the U.S., wrote for The Washington Post and had been critical of the Saudi regime.

Riyadh initially denied any knowledge of his disappearance before saying Khashoggi was killed after ‘negotiations’ to convince him to return to Saudi Arabia failed.

The kingdom later said the death penalty was being sought against five suspects, in an effort to distance the prince from the murder.