Khloe Kardashian is ‘taking her time’ naming newborn son she shares with ex-Tristan Thompson: ‘She wants it to be just right’

The reality star and her ex-partner Tristan Thompson, who split again in January, welcomed their second child together, via surrogacy, this past week.

‘Khloé is on cloud nine. Getting a sibling for True has been such a journey.’ a source close to the situation revealed to People. ‘She is very excited to be a mom again. She really wanted a baby boy.’

Taking it day by day: Khloé Kardashian, 38, is taking her time in naming her newborn son that she welcomed, via a surrogate, last week

That insider went on to share that the Good American co-founder isn’t in a rush to decide on a name for her new baby.

‘Khloé hasn’t shared a name yet. She is taking her time with the name,’ the source continued, adding, ‘She wants it to be just right.’

The news broke that the on-again, off-again couple were expecting a son together on July 13, about seven months after their last breakup.

They are already parents to four-year-old daughter True Thompson.

‘My happy sweet girl,’ the proud mom, 38, gushed in the caption of her latest Instagram post showing the little girl flashing her infectious smile. 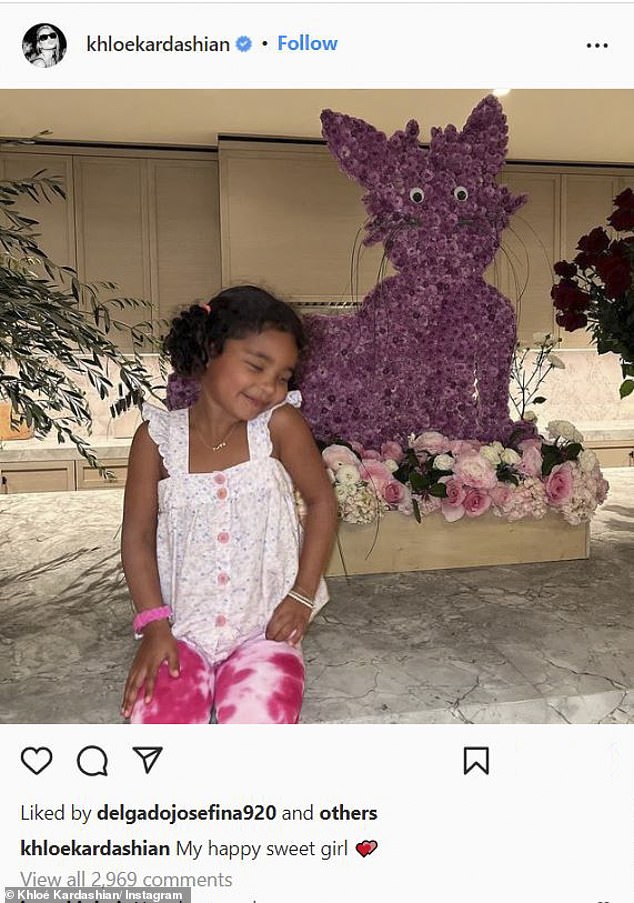 Mommy’s girl: While taking her time sifting over names for her son, the Good American co-founder posted another adorable photo of her daughter True Thompson, four, on Sunday 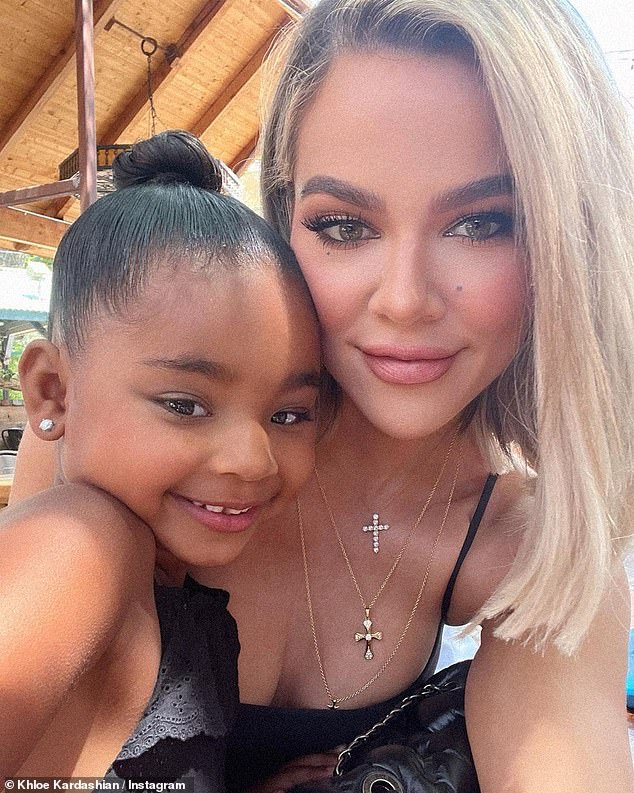 Baby No. 2: A representative ‘confirmed True will have a sibling’ after rumors swirled about Kardashian welcoming a son through a surrogate with her ex-partner Tristan Thompson

‘We can confirm True will have a sibling who was conceived in November,’ a representative previously told People. ‘Khloé is incredibly grateful to the extraordinary surrogate for such a beautiful blessing. We’d like to ask for kindness and privacy so that Khloe can focus on her family.’

The exes have had a rollercoaster relationship since they first started dating back in 2016.

In September 2017, rumors began circulating that the Keeping Up With The Kardashians star was pregnant with her first child. The NBA player, who was with the Cleveland Cavaliers at the time, was already a dad to son Prince, whose mother, Jordan Craig, was pregnant when he started dating the reality star. 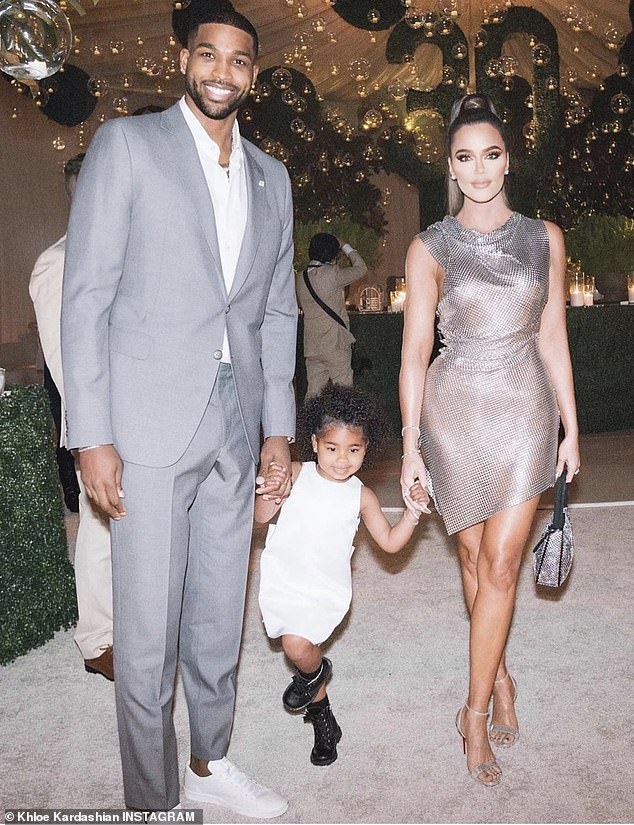 Rocky road: The former couple have had an on-again, off-again relationship since they started dating in 2016, which resulted in the arrival of True in April 2018; they former coup are pictured with their daughter in March 2021

Right before Kardashian gave birth to True in April 2018, it was revealed that Thompson had cheated on her on numerous occasions, but somehow they managed to stay together.

They eventually split in February 2019 when word got out that he had cheated with Kylie Jenner’s former best friend, Jordyn Woods.

Yet they found their way back to each other the following year, due in part to spending plenty of time together during COVID-19 quarantine.

They split again in June 2021 before reuniting, and then Kardashian ended the romance for seemingly the last time this past January.

Thompson is also the father to son Theo, eight months, whom he shares with Maralee Nichols. 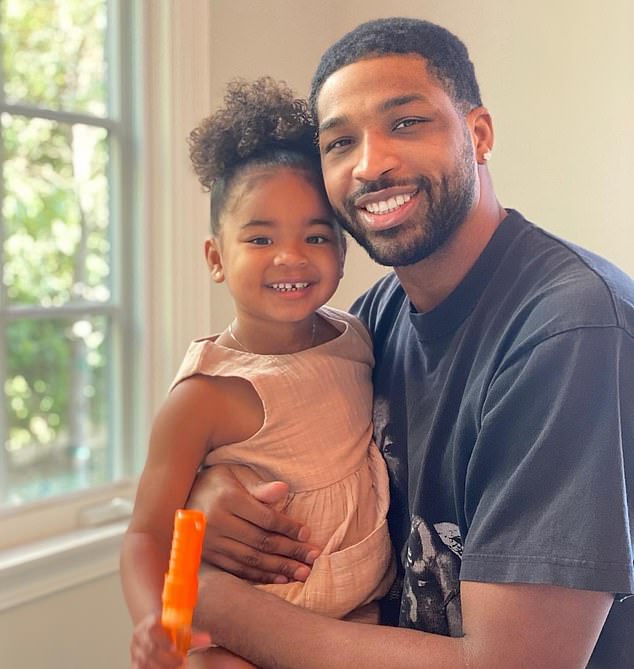 Proud papa: The NBA player, who played for the Indiana Pacers in 2021, co-parents his daughter that he shares with ex-partner Khloe Kardashian; he is seen with True in June 2021 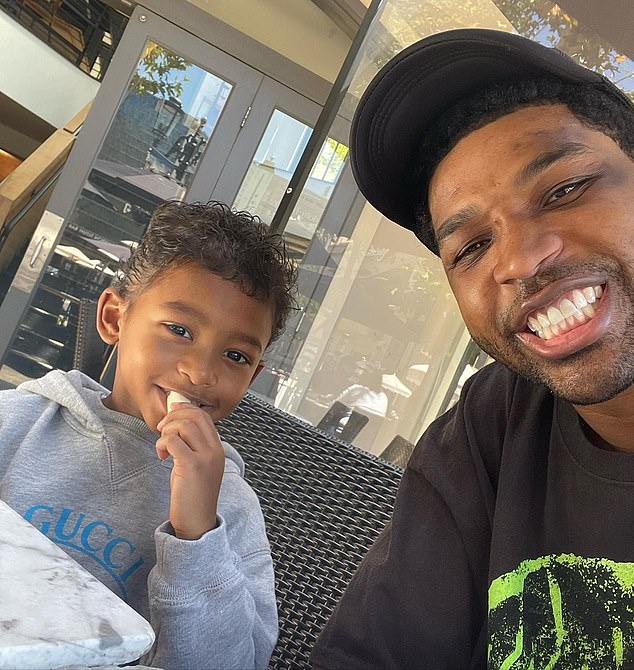 Proud papa: Thompson also has a five-year-old son Prince with Jordan Craig and an eight-month old son Theo with Maralee Nichols; Thompson is pictured with his boy in June 2021