Kid Rock explains reason behind his lurid rant against Oprah

Kid Rock claims he went on a lurid rant against Oprah because ‘her people’ wanted him to explain why he ‘loved her’ before he could appear on her top-rated talk show several years ago.

The rocker – who was caught on camera making foul-mouthed slurs against the star inside Nashville’s Big Ass Honky Tonk Rock N’ Roll Steakhouse last week – took to Twitter on Saturday night after the footage went viral.

The musician, 48,  stated: was seen in the footage taken last week falling about at Kid Rock’s Big Ass Honky Tonk Rock N’ Roll Steakhouse in Nashville, screaming into a microphone: ‘F**k Oprah’ before he was ultimately helped off stage.

In the clip he is seen squatting up and down in a vulgar manner complaining: ‘Oprah Winfrey is like “Hey, I just want women to believe in this s**t”. F**k her.’ 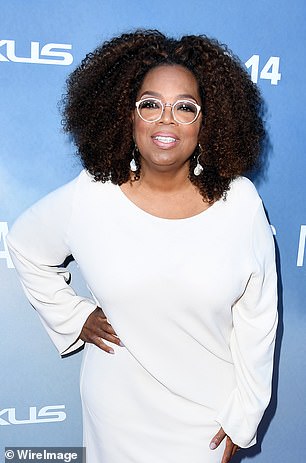 Kid Rock is heard yelling last week in Nashville (left): ‘F**k Oprah. Oprah Winfrey is like “Hey, I just want women to believe in this s**t”. F**k her’

The rocker’s rambling performance did not go down well with the crowd, who appeared to be waiting for the live music to restart.

But the long-haired star continued – even as his outburst bombed with revelers.

‘I’m not a bad guy, I’m just an honest guy saying I don’t like Oprah Winfrey or Joy Behar. They can suck d**k sideways,’ he said making lewd gestures with the same hand that held his drink. 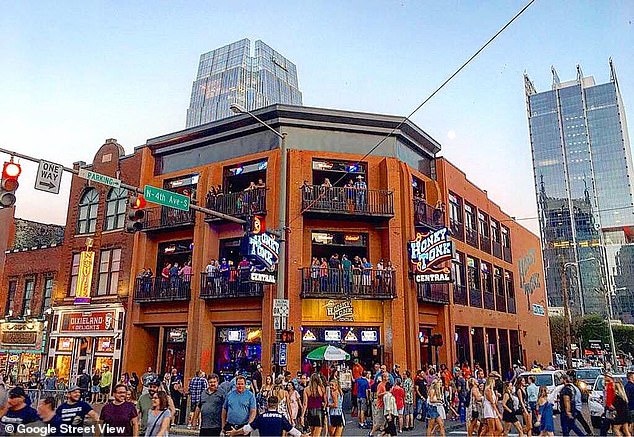 Revelers seemed stunned as he said about Winfrey: ‘She can suck d**k sideways’. One customer yelled back accusing him of being racist after he said: ‘And if you say that people say “Hey, I’m pretty sure Kid Rock’s a racist.” I’m like, “OK fine.” F**k off’

The line prompted boos and screams from the crowd but it got worse as Kid Rock – real name Robert James Ritchie – added: ‘You call your people I’ll call mine.’

Revelers are heard reacting in shock and one comments that the singer is intoxicated.

‘He’s racist. Look at him he’s blacked out drunk as f**k,’ a witness is heard saying.

Kid Rock goes on in the footage: ‘This is weird right?’ causing an angered punter to yell, ‘This is so racist!’

But Kid Rock takes it further with a direct insult to the TV-and-movie star yet again. 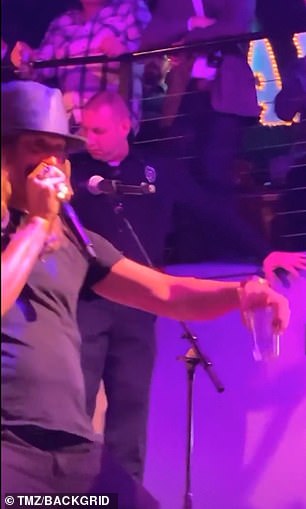 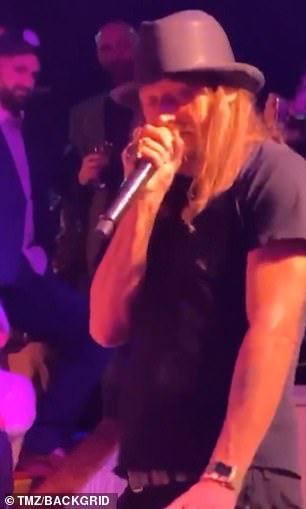 It got worse as Kid Rock – real name Robert James Ritchie – added: ‘You call your people I’ll call mine’. But he insists: ‘I’m not a bad guy, I’m just an honest guy 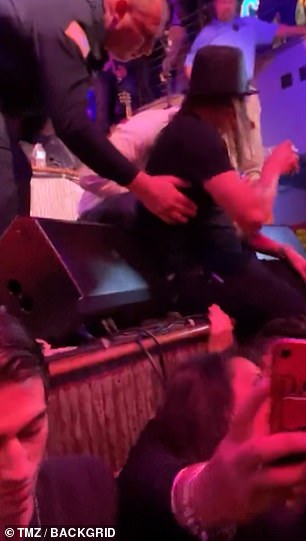 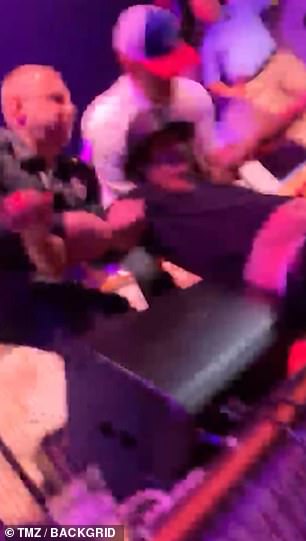 In the clip obtained by TMZ, he shouts into the microphone to a stunned crowd that some will say he’s racist, and the person filming the bizarre moment is heard opining that he indeed is.

It’s unclear why he directed his rant at the 65-year-old media mogul, actress and philanthropist whom he circled back to after later laying into Joy Behar and Kathie Lee Gifford.

At the end of the clip he is seen being carried off stage by someone who appears to be from the sheriff’s department.

Locals seemingly love Winfrey, who went to college and started her career in Nashville. Last December Councilwoman Sharon Hurt was pushing a resolution to rename the airport after Winfrey.

But it’s not the first time Kid Rock has spoken of his feelings towards Winfrey who some have asked to run for president.

His 2001 track Forever namechecks her. Lyrics read: ‘Thick like Al Rowker, Pumpin out hits, Gettin chips like Oprah, B***h I told ya, do not hate, Or question the music I make.’

In 2008 he told the Independent: ‘My real-life villain… Oprah Winfrey, she rubs me up the wrong way. I just don’t believe her. Maybe it’s because I’m not one of the 150 million brainwashed women who heed her every word.’ 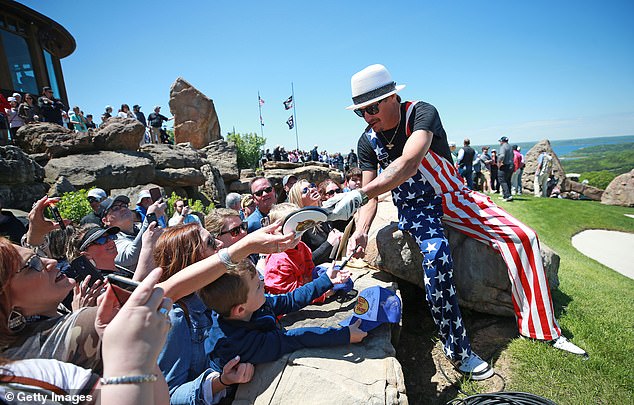 On Friday he tweeted about a sale in his online store that sells t-shirts including the slogan, ‘God, guns and Trump’, and one that depicts red states as the United States of America but blue states ‘Dumbf**kistan’

The same year he said in another interview that he hated the influence she had on voters.

‘I think celebrity endorsements hurt politicians,’ he said. ‘Because as soon as somebody comes out for a politician, especially in Hollywood, when they all go, “I’m voting for this guy!” — I go, “That’s who I’m voting for!” … As soon as Oprah Winfrey pops up and goes “Ha-la-la-la-la,” I’m like, “I love Barack Obama. I hate Oprah Winfrey”.’

He explained, ‘I don’t hate her. I just don’t believe in her, so I don’t want any part of any of that. I think celebrities hurt politicians.”

He went on to endorse Republican candidates Mitt Romney and Donald Trump, however.

The All Summer Long hitmaker has also hit out at The View’s Behar in the past – who is vocal about his dislike for Trump.

He came under fire for calling Behar a b***h on Fox & Friends last year as he told the hosts he’d been drinking that day.

‘God forbid you say something a little wrong; you’re racist, homophobic, Islamophobic, this that and the other. People need to calm down, get a little less politically correct,’ Kid Rock said. ‘And I would say, you know, love everybody. Except, I’d say screw that Joy Behar (expletive).’

Then the TV host invited Kid Rock on the show for a beer in response to his comments.

It’s unclear what got him going about Gifford, who recently moved from Connecticut to Nashville.

The Michigan-born star opened the venue in October 2018 and he subsequently was removed from his role as grand marshal in the city’s Christmas parade last year.

The Tennessean reported it was after Councilman Freddie O’Connell objected to his Behar comment. 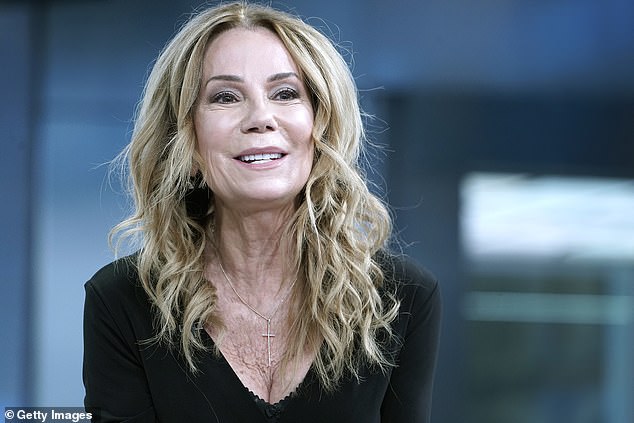 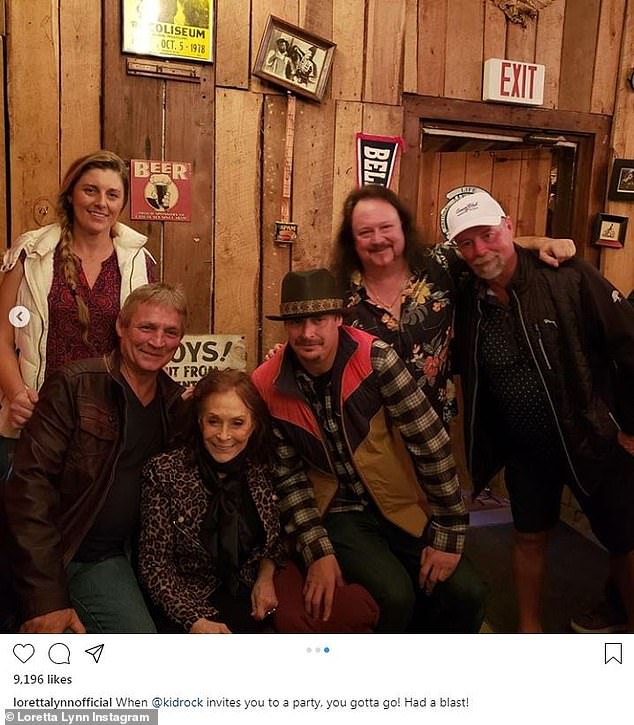 In January, an African American employee at his Kid Rock Made in Detroit establishment claimed racial discrimination in a lawsuit.

Carinne A. Silverman-Maddox alleged white employees were favored and she was ultimately terminated after she began to receive strange looks from colleagues when she started to wear her hair naturally in October 2018.

She claimed she received different treatment as one of the 15 staff when she was straightening her hair since starting the bartender job in August 2018.

He did tweet about a sale in his online store that sells t-shirts that include the slogan, ‘God, guns and Trump’, and one that depicts red states as the United States of America but blue states ‘Dumbf**kistan’.

It appeared the rocker spent some time around the Thanksgiving holiday with country music singer Loretta Lynn.

She posted on Instagram: ‘When Kid Rock invites you to a party, you gotta go! Had a blast!’