Kiev-born Andriy Shevchenko knows the Champions League better than most

When Andriy Shevchenko stands in a small airless gymnasium near Tower Bridge and talks about his glittering past, the power of opportunity and the spirit of champions, his young audience fall silent.

Shevchenko, now manager of Ukraine, is a Ballon D’Or winner with a career bound tightly to the Champions League, which reaches its climax on Saturday with Liverpool against Real Madrid in his native Kiev.

His breakthrough came cast as the clinical marksman in a Dynamo Kiev team which ousted Arsenal and Real on its way to the semi-finals. He was the hero as Milan won the trophy in Manchester, and he suffered heartbreak at the hands of Liverpool in Istanbul before another near miss with Chelsea in Moscow.

When Andriy Shevchenko spoke to his young audience in London, they quickly fell silent 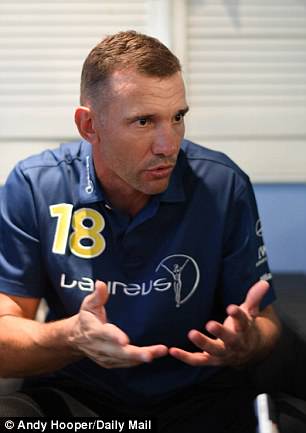 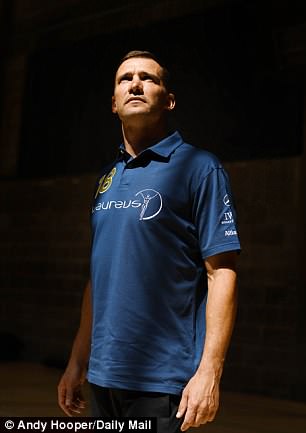 ‘The Champions League is a special final,’ said Shevchenko. ‘Those teams who reach the final, they all have something.

‘Inside, they have the spirit of the warriors. They have overcome the difficult moments and this is when you see the real players, when they know they are not playing well but they keep it together because there will be a moment.

‘This is what Chelsea did against Bayern Munich and I’m glad there was this chance for a great generation of players: John Terry, Frank Lampard and Didier Drogba.

‘The biggest European clubs fight for this history.

‘They believe, and the fans have a huge influence and now Liverpool have the chance after 10 years without a final and Real Madrid are the team who have been performing great in the Champions League.’ 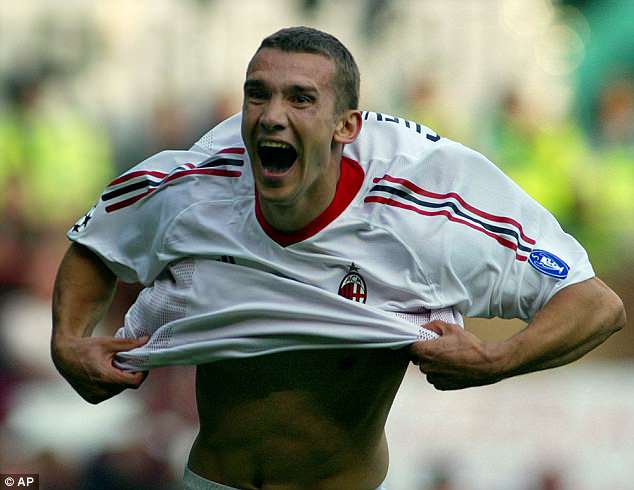 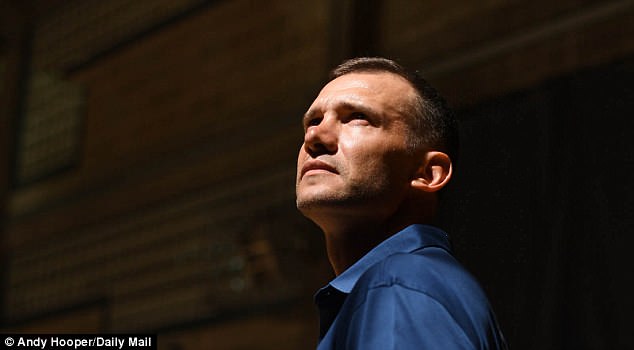 He grew up in Kiev, the city which will host this year’s final between Real Madrid and Liverpool

Shevchenko learned his trade on the streets of Kiev and this inspires him to support the Street League project which uses football to engage young adults and help them into employment, education and training.

He is a Laureus ambassador, promoting their Sport for Good campaign and using the power of football to help end violence, discrimination and disadvantage. This programme at the Downside Fisher Youth Club in South London is one of more than a hundred they support in 35 different countries.

‘Work hard, commit yourself, take your chances and anything is possible,’ said Shevchenko, who was first spotted playing in the Ukrainian capital at the age of nine by coach Oleksandr Shpakov who is now into his 70s and still working for Dynamo Kiev academy.

Shevchenko had been reared on the great Dynamo team of the ’80s which starred Oleh Blokhin, Ihor Belanov and Oleksandr Zavarov and won the European Cup Winners’ Cup under Valeriy Lobonovskyi. 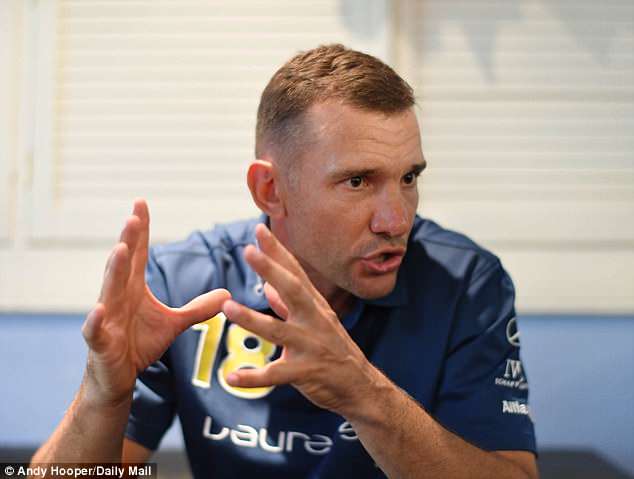 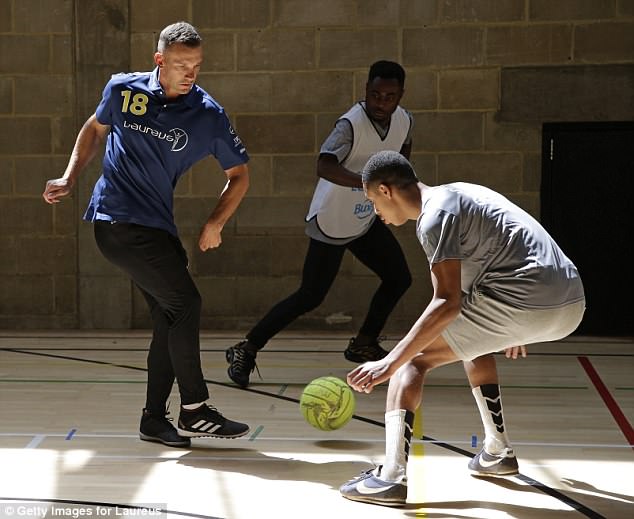 Although his earliest connections to his boyhood club were complicated by the disaster at a nuclear reactor in Chernobyl, 75 miles to the north.

‘We were evacuated for three months to stay far from Kiev,’ said Shevchenko. ‘No-one knew what had happened, the Government kept everything out of the media but my Dad knew because he worked in the military.

‘Most of the schoolchildren were evacuated. There was no panic. We finished school and were transferred to different parts of the country. Only the kids, most of the adults carried on working in the city.

‘When I came back I didn’t go back to training. I never thought about it. I was playing with my friends until the coach came to my house and talked to my parents, worried because he hadn’t seen me. From then I never missed one session.

‘It was a dream to play for Dynamo Kiev and to win titles and there is still a connection, the same as there is to AC Milan and Chelsea. My three clubs are always in my heart.’ 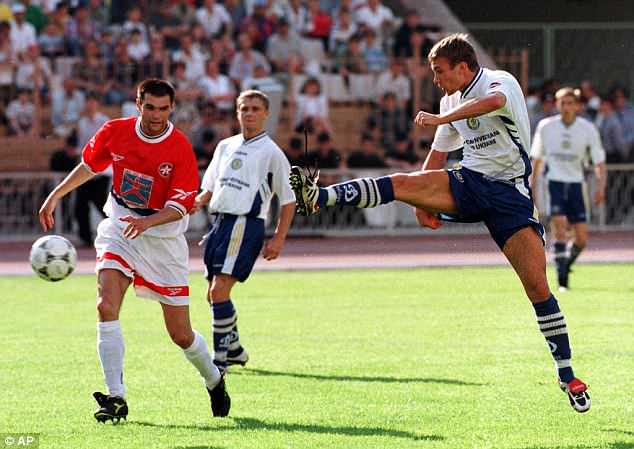 Shevchenko began and ended his career with Dynamo Kiev, a club very close to his heart 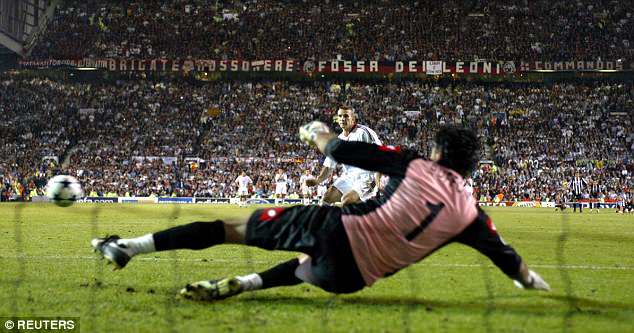 After scoring the winning penalty in a shootout as Milan beat Juventus in the Champions League final at Old Trafford in 2003, Shevchenko took the trophy to Baikove Cemetery in Kiev and presented it before the tomb of Lobonovskyi, his mentor who had died the previous year.

The legendary Ukrainian coach won a dozen league titles with Dynamo Kiev, seven within the Soviet Union and five after independence. He won the Cup Winners’ Cup in ’75 and ’86, but the Champions League eluded him. 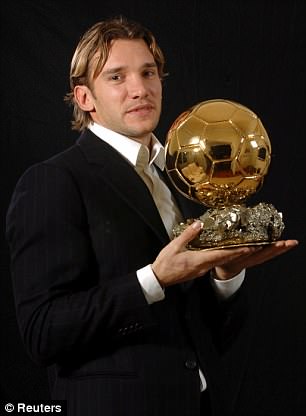 Shevchenko won the Ballon d’Or in 2004

‘He passed away and never had a chance to win it,’ said Shevchenko. ‘We lost in the semi-final against Bayern Munich. It was my tribute for everything he did for me in my career. He is a very important man in my life.’

His second Champions League final was Milan’s collapse against Liverpool from 3-0 up at half-time to defeat in a shootout when Shevchenko’s penalty was saved by Jerzy Dudek.

‘In one way it was a very bad experience,’ said the 41-year-old. ‘We had the chance to win and we didn’t win. I know exactly what I did wrong but that moment is gone.

‘I am 100 per cent sure we gave it everything we could at that moment. We didn’t give them the trophy. Liverpool actually took it from us. That is the heart-breaking fact.

‘There is nothing to regret, no looking back to think if we played again I would change something. If I look back, I will play the same way and have the same attitude. 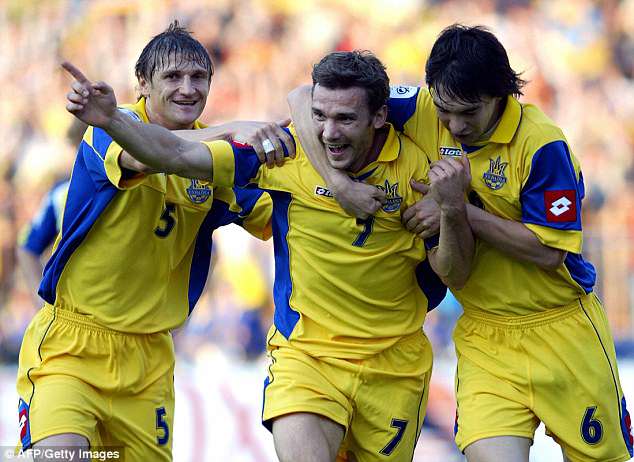 He was a legendary player in Ukraine, and now he is the manager of the national team 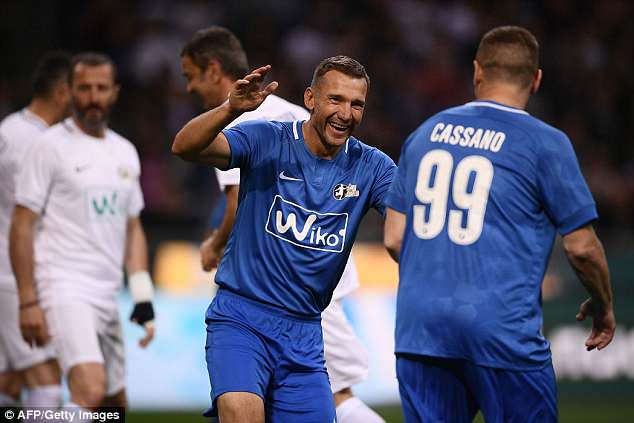 ‘I want to give the credit to Liverpool. Three-nil down and comeback with six great minutes and then to defend and hold the game with some unbelievable saves and show the spirit of the team.’

This outlook helped, 10 years ago, when he could offer comfort to John Terry when Chelsea lost the final on penalties against Manchester United.

‘We came so close,’ said Shevchenko, an unused substitute in Moscow after recovering from a back injury. ‘I was proud of the Chelsea players. We got there and we had the chance.

‘We all understood how John Terry was feeling. We all felt the same. We supported him a lot and I’m glad there was another chance for them in Munich, a similar, dramatic match, with penalties again.’

Perhaps one day Shevchenko will be back in the Champions League as a coach. Inspired by the teachings of Lobonovskyi, he has studied with the support of modern managers such as Jose Mourinho, Carlo Ancelotti and Max Allegri.

For now he will focus on Ukraine’s qualification for Euro 2020. ‘I have my ideas and I will try to develop them,’ he said. ‘This is my chance and I feel very lucky.’ 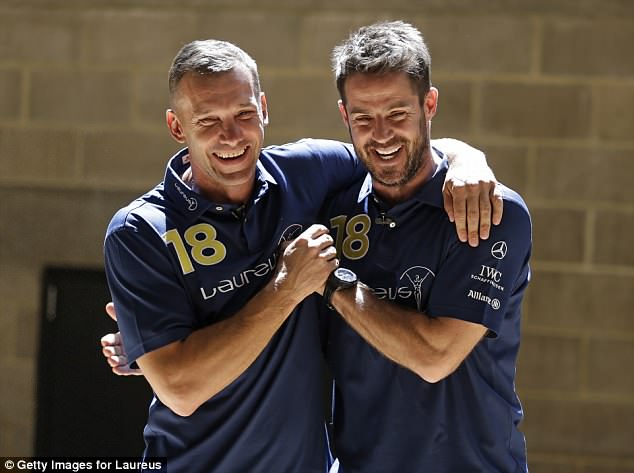 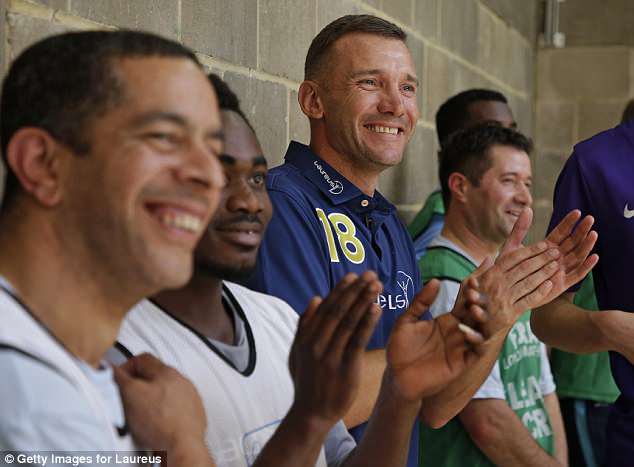