Killer finally reveals where he dumped remains of woman

A butcher who hacked his landlady to death and hid her remains has finally revealed the location of his victim’s body.

Andrew Wallace, 42, killed Julie Reilly, 47, in February 2018 and was jailed for life with a minimum of 28 years after admitting murder at the High Court in Glasgow.

Wallace, a trained butcher and lodger at Ms Reilly’s home in the Govan area of Glasgow, had dismembered her with a knife and put her remains in plastic bags and suitcases before hiding her remains around the city.

He had kept their location a secret and showed ‘absolutely no remorse’ in court, but after 16 months after Ms Reilly’s death he finally revealed that he had hidden her remains in Cessnock.

Ms Reilly’s sister Lynne Bryce, 37, was relieved to be able to give her sister a proper funeral.

Ms Bryce said: ‘Losing my sister in such a horrific way has changed my life forever. I would never have given up searching for her remains, so I’m glad that he finally did the respectful thing.

‘The whole family are relieved that Julie has finally come home to us, where she belongs.’ 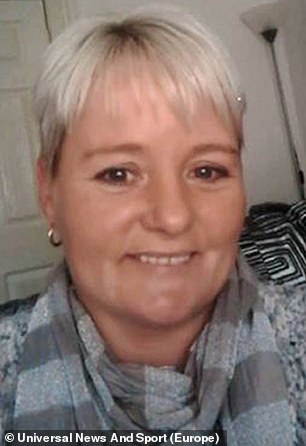 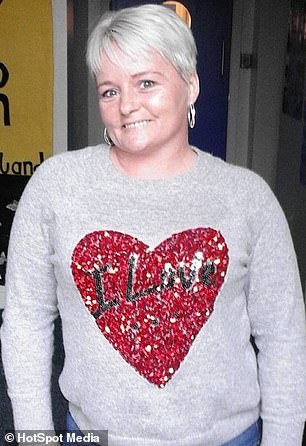 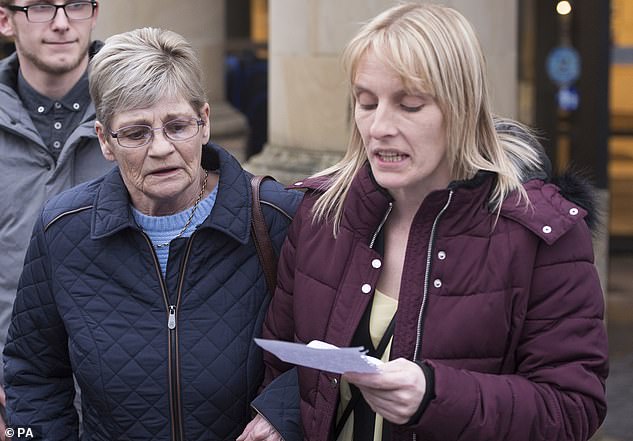 Margaret Hanlon (left) and Lynne Bryce, the mother and sister of Julie Reilly, pictured pleading for Wallace to reveal where the rest of Ms Reilly’s remains were outside Glasgow’s High Court in February

Grandmother Ms Reilly’s devastated family previously revealed all they had to bury of her was just two bones, and they made a desperate plea for more information in February this year.

Ms Bryce had said: ‘I hope that if he has a heart he could now please tell us where he has put my sister and let her come home to be put to rest properly, with the dignity she deserves.’

Wallace had a string of previous convictions, including multiple assaults, a firearms offence, and culpable homicide.

Ms Bryce said: ‘He showed absolutely no remorse in court, yawning and smirking. He even refused to tell us where Julie’s body was, it was sickening.

‘It took us almost 18 months to give her the dignity of having a proper burial. We never gave up trying to find her and I’m so happy that she’s finally home.

‘Julie would have given anyone her last 20p. She offered to help Andrew by giving him a home and paid with her life.’

Ms Bryce and her big sister Ms Reilly were always close, despite their 11-year age gap. 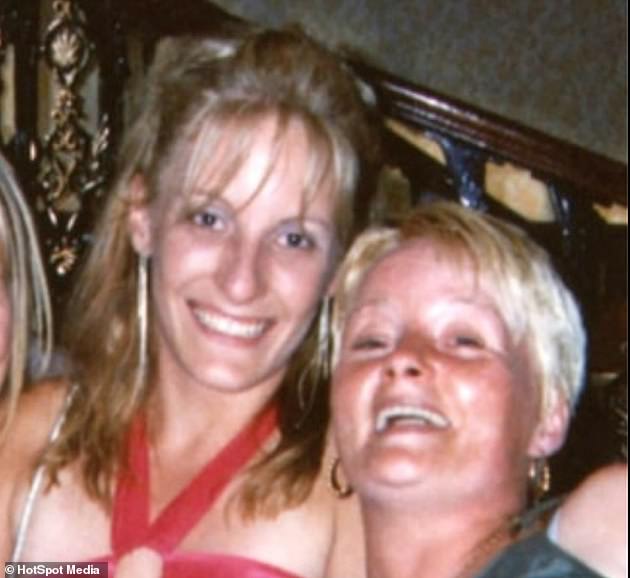 Lynne Bryce, pictured left with sister Julie Reilly, was relieved to be able to give her sister a proper funeral

Determined for a fresh start, she moved 35 miles away from her home in Auchinleck to Glasgow.

Ms Bryce said: ‘Our strong bond stayed the same despite the distance. Me and mum Margaret, now 70, would get the bus to see her.’

Eventually Ms Reilly met her husband, but following their split, she struggled to cope and took an overdose, with police finding her lying on the floor in her flat, where she’d been for five days.

Her brain had been starved of oxygen and it left her confused and forgetful. 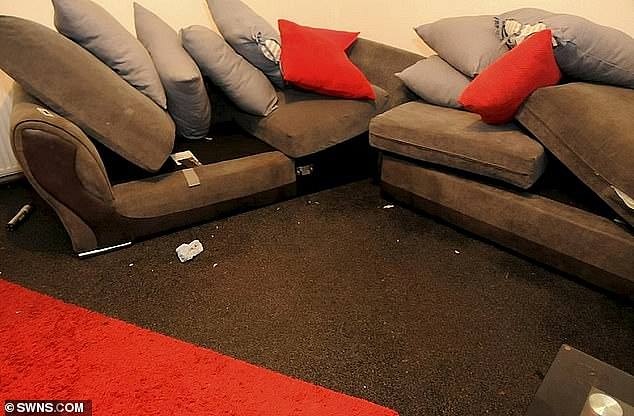 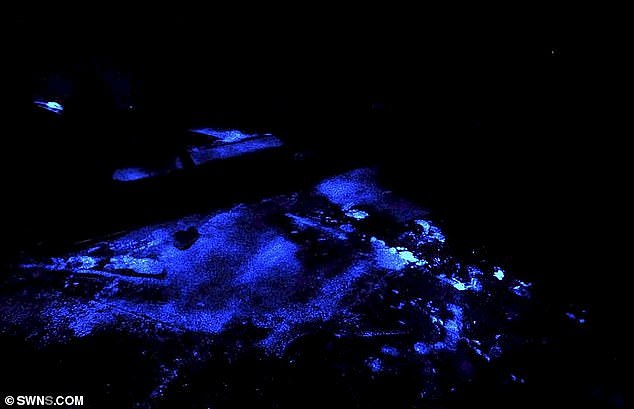 Ms Bryce said: ‘Mum visited her in hospital, and said she was completely different. She couldn’t remember the PIN for her bank card.

‘But we were so grateful that she’d survived.

‘She stayed in hospital for six months and then went to a rehabilitation centre.

‘By 2017, Julie was living alone again, she was determined to be independent.’

That year in December, Ms Reilly revealed to her mother that she’d taken in a lodger.

Ms Bryce said: ‘Mum thought it was a bad idea, but I was relieved she had someone to take care of her.

‘We never met the lodger, and Julie never mentioned him again but we knew they were living together.’

In February 2018, Margaret was contacted by Ms Reilly’s hospital after she missed an appointment. 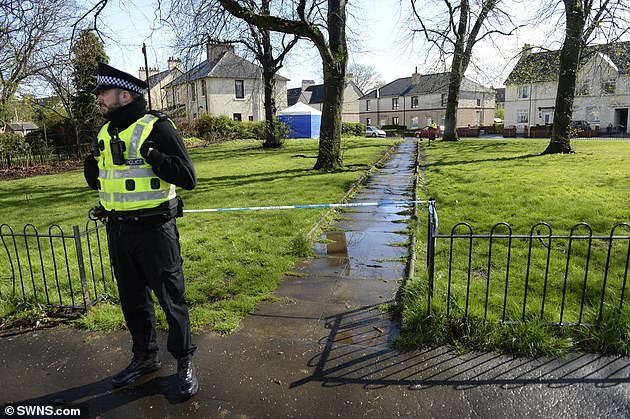 ‘We called her desperately, but she never answered.

‘The next day, police officers visited us and told us that they were launching an investigation into Julie’s disappearance.’

Ms Bryce said: ‘Police said they’d be in touch with further news and two months later in April, we made a public appeal on TV.

‘I hoped that Julie would see our faces and reach out.

‘Then a local newspaper reported that Julie’s disappearance was being investigated as a murder. We were shocked.’

That month in April, two months after Ms Reilly was last seen, officers told her family they’d found a part of her. 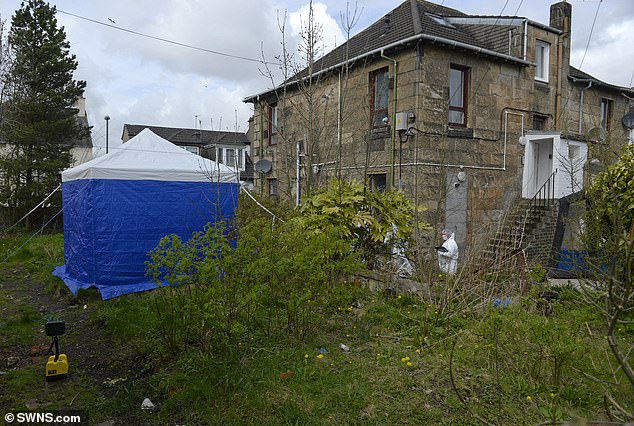 ‘We later found out that her thigh bone had been found.

Wallace was charged with murder. Almost a year after Ms Reilly’s death, the family decided to bury what they had of her so they could give her a proper send off.

In February 2019, Wallace pleaded guilty to murder and attempting to defeat the ends of justice at the High Court in Glasgow.

During his hearing, further details were released about MS Reilly’s last moments.

CCTV footage had captured Ms Reilly and Wallace doing a food shop together at Aldi.

In the weeks following Ms Reilly’s death, Wallace covered his tracks, cleaning the house and dumping her body parts around Glasgow.

It was also revealed that Wallace had a string of previous convictions, including multiple assaults, a firearms offence, and culpable homicide.

Ms Bryce and mother Margaret are backing Helen’s Law, which means that parole will be blocked for murderers who withhold information regarding the location of remains.

The new legislation, named after Helen McCourt, 22, who was murdered in 1988, has been backed by the Scottish government and is hoped to brought into force as soon as possible.