Kim Basinger is one of the many stars who has lost her home in a California fire.

Her daughter Ireland Basinger-Baldwin revealed the news on Twitter.

‘So many friends and friends and family of friends are losing everything they own in these fires,’ she shared. ‘My mom and her partner lost their Malibu home in #Woolseyfire and thankfully, they are both safe.’

Sad loss: Kim Basinger is one of the many stars who has lost her home in a California fire. Her daughter Ireland Basinger-Baldwin revealed the news on Twitter. Seen in LA Confidential 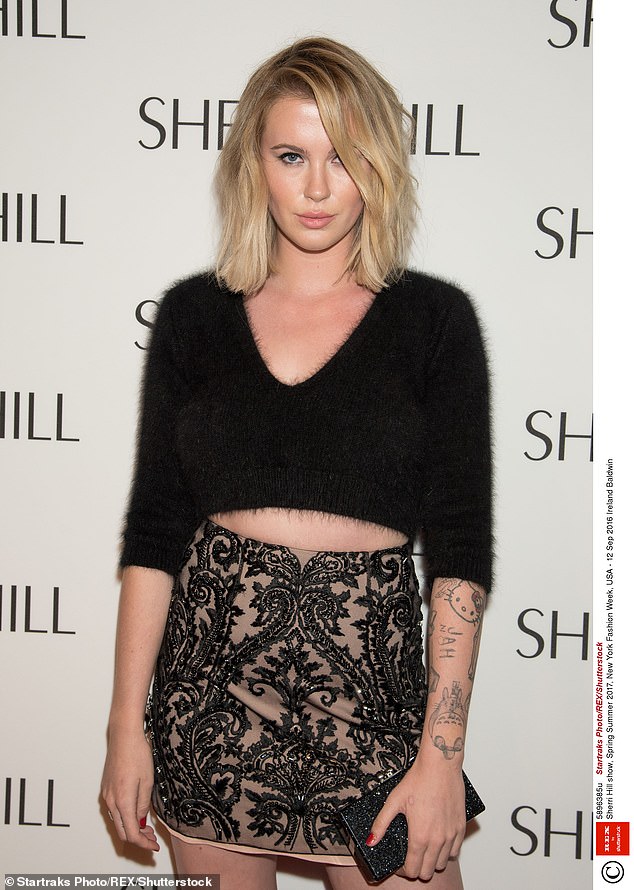 She broke the news: Ireland Baldwin shared the information on Twitter; her dad is Alec Baldwin

Basinger had Ireland with SNL star Alec Baldwin who is now wed to Hilaria Baldwin.

Ireland – who is a model – was their only child.

Kim took off in the 1980s when she played a Bond gilr in Never Say Never Again.

She went on to star with Mickey Rourke in 9 1/2 Weeks and has also worked with Russell Crowe on LA Confidential and with Eminem on 8 Mile. The looker was in Batman with Michael Keaton too. 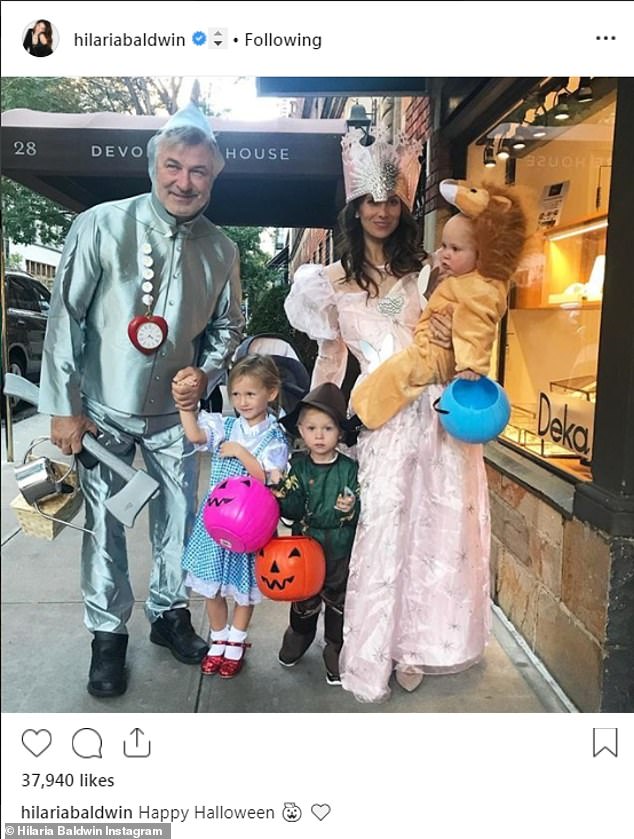 He moved on: Basinger had Ireland with SNL star Alec Baldwin who is now wed to Hilaria Baldwin. Ireland – who is a model – was their only child

Her most recent film work is the Fifty Shades Of Grey film series.

Ireland also revealed that her Malibu home has been caught up in the Woolsey Fire.

The model spoke about the drama of trying to reach her home on Instagram on Monday.

Ireland complained that a cop guarding Kanan Dume Road, one of the main streets leading into Malibu had blocked her and a friend from getting in while accusing them of being looters. 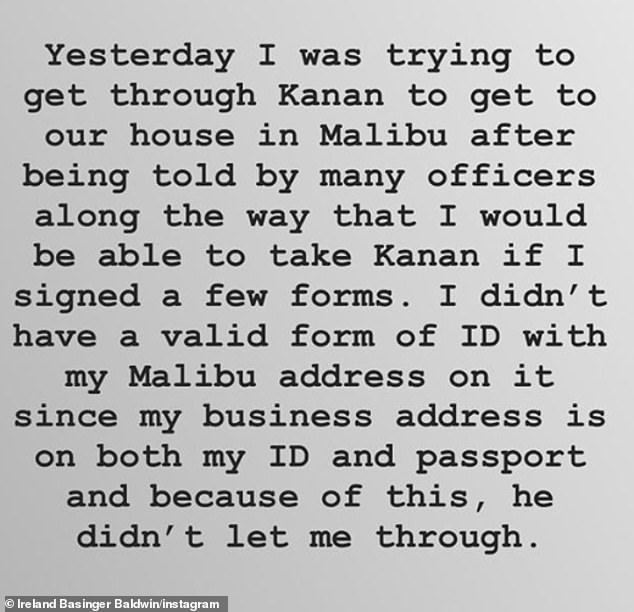 She then launched into a foul-mouthed tirade against President Trump after he blamed the fires on poor forest management in California and threatened to withdraw federal funding.

In a series of posts, Ireland explained that she arrived in Malibu to rescue any possessions she could from her own home and try to help others escape.

Despite not having proof of address on her – because her ID and passport are registered to her business address – she claims multiple police officers along the way assure her she would be able to get into Malibu if she filled out a few forms.

However, she wrote: ‘The officer by Kanan [the street leading into Malibu] was a complete and total a**hole.

‘When I told him I could pull up proof of water bills or whatever I could find, he didn’t even look at me and just told us to turn around.

‘He assumed we were looters trying to get into Malibu to steal. He didn’t say he wasn’t letting us into Malibu because of looting, he LITERALLY called us looters. 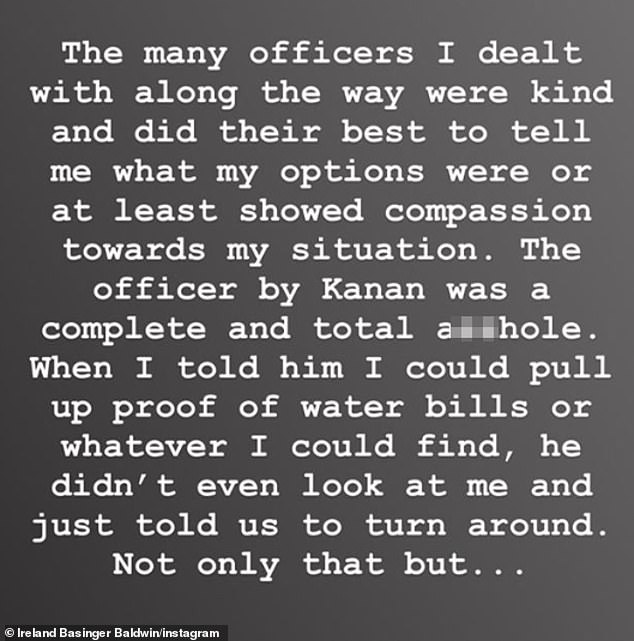 She lashed out at the cop, calling him an ‘a**hole’ because of the way she was treated 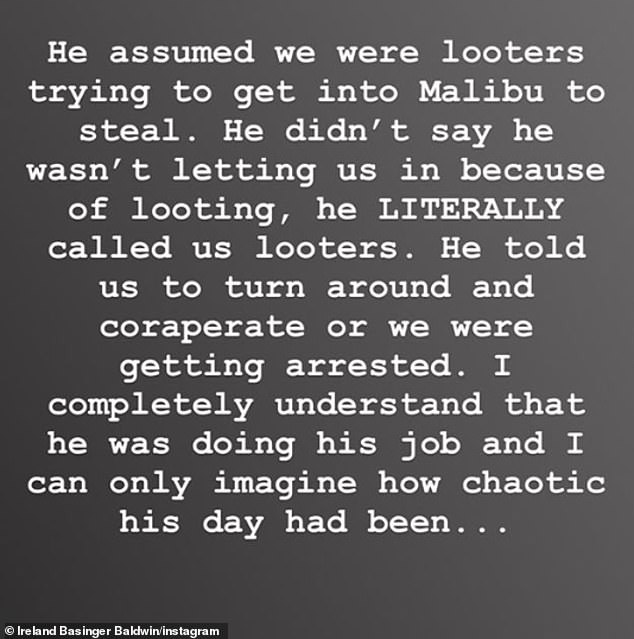 ‘He told us to turn around an cooperate or we were getting arrested.’

Ireland went to to compliment the other officers she spoke to, saying they acted calmly and professionally without making accusations.

She also thanked firefighters and police for helping to put out fires and keep people safe, before branding the one officer who offended her ‘a d**k.’

As for her house, she said she has no idea whether it is still standing but revealed all of her pets and her boyfriend were out of harm’s way.

Then, Ireland turned her rage on Donald Trump and a pair of tweets that the President issued over the weekend, attempting to turn the fires into a political issue.

The first, on Saturday, read: ‘There is no reason for these massive, deadly and costly forest fires in California except that forest management is so poor.

‘Billions of dollars are given each year, with so many lives lost, all because of gross mismanagement of the forests. Remedy now, or no more Fed payments!’ 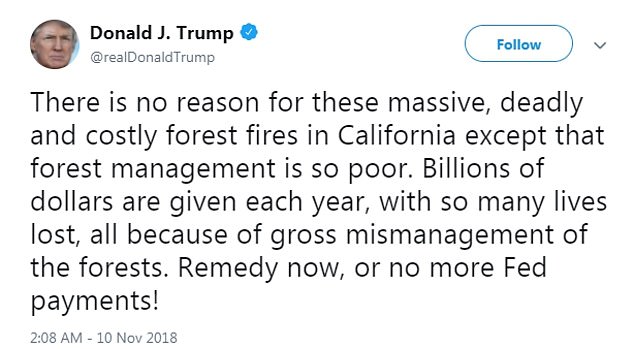 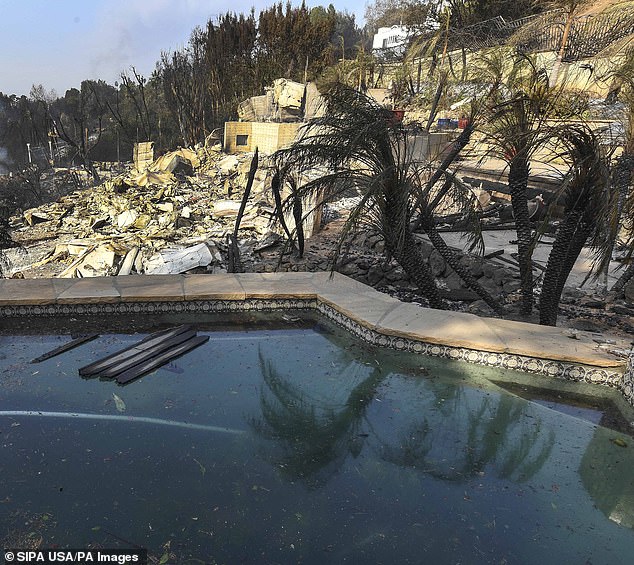 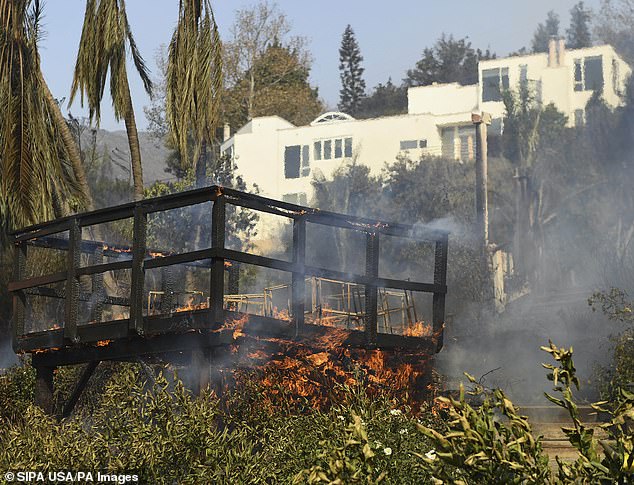 A second, issued after a backlash, added: ‘With proper Forest Management, we can stop the devastation constantly going on in California. Get smart!’

Ireland retorted: ‘At this point, calling Donald Trump an a**hole or being surprised by his reaction to any of these fires is a waste of energy. All you really can do is feel sorry for him.

Ireland was not the only celebrity to be affected by the fires, as Robin Thicke, Gerard Butler and Miley Cyrus revealed that their mansions were all destroyed in the fire. 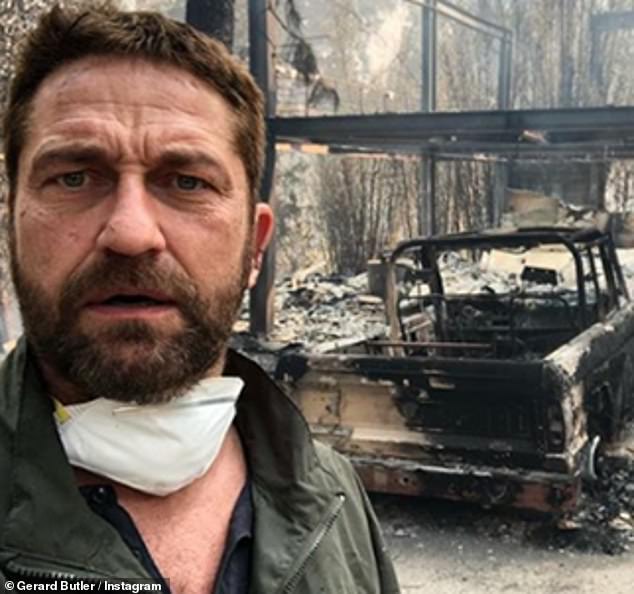 Gerard Butler was among the celebrities to have their homes destroyed, posing in front of the burned-out remains of his house 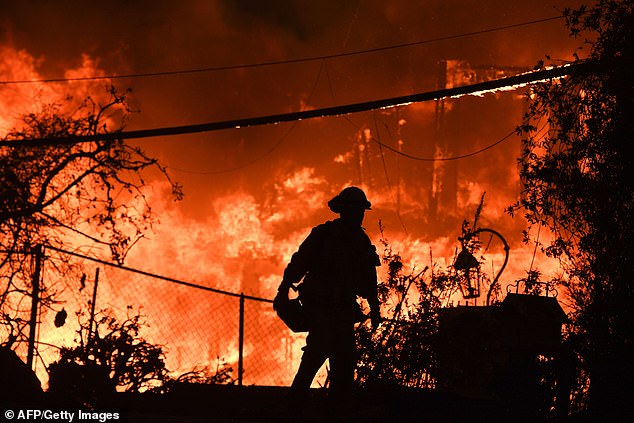 In total 170,000 people have been evacuated from near the Woolsey Fire, which has destroyed 370 buildings and is threatening another 57,000

Meanwhile Simon Cowell was evacuating on Sunday night as strong winds fanned the flames towards his $23million home.

Kim Kardashian, Kanye West, Will Smith, Caitlyn Jenner and Lady Gaga were also forced to flee as the flames approached, though it is thought all of their homes are intact at this point.

The Woolsey Fire was burning largely out of control on Monday morning, having ripped through 90,000 acres and destroyed 370 buildings.

Two people have also died in the blaze after their bodies were found inside a burned-out car stranded on a long driveway.

In total, 170,000 people have been evacuated with a further 57,000 buildings under threat, Cal Fire reported.