By Associated Press and Afp

The Thanksgiving launch was revealed in a one-line announcement by South Korea’s Joint Chiefs of Staff which gave no further details.

The sources said that the projectiles appeared to be ballistic missiles – which Pyongyang is banned from firing under UN sanctions.

The launch was the latest in a series of weapons tests by Pyongyang, which fired what it called two ‘super-large multiple rocket launcher’ systems last month.

It was unclear if the launch, which came shortly after 3am in Washington, was deliberately timed to coincide with one of America’s biggest national holidays.

US President Donald Trump has played down the recent launches, claiming North Korea’s moratorium on nuclear tests as a foreign policy success.

But negotiations between Pyongyang and Washington have been gridlocked since a second summit between Trump and Kim Jong-un collapsed in February.

Earlier this month, Seoul and Washington said they would postpone planned joint military exercises to ease diplomacy with the North.

However, Pyongyang dismissed the announcement and has imposed an end-of-year deadline for the U.S. to come up with a fresh offer.

Some experts say North Korea may resume testing long-range missiles and nuclear devices if the United States fails to meet the deadline. 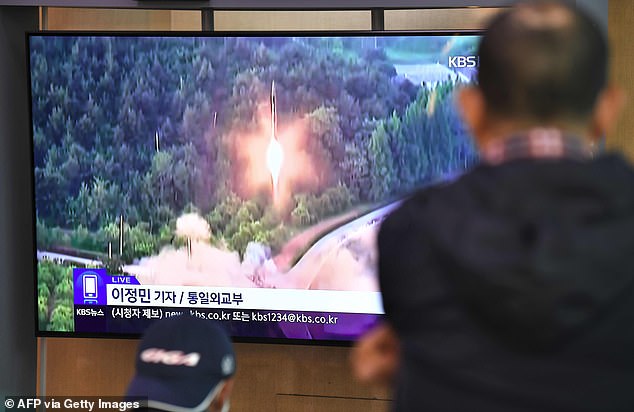 Trump hinted at the prospect of a fourth meeting with Kim earlier this month, only to be rebuffed by the North which said it had no interest in summits ‘that bring nothing to us’.

Hopes for a breakthrough after Trump and Kim shook hands in an impromptu meeting in the border zone on June 30 have proved short-lived.

On Monday, North Korea said Kim had visited a front-line islet and ordered artillery troops there to practice firing near the sea boundary.

The boundary has been the scene of several bloody naval clashes between the Koreas in past years.

Pyongyang is under multiple sets of international sanctions over its banned nuclear weapon and ballistic missile programmes.

It says the missiles are necessary to defend against new warplanes and weapons acquired by South Korea, including the advanced F-35 stealth fighter jet.