Howard X, from Hong Kong, and Trump impersonator Russell White, from Canada, were questioned by police in the Vietnamese capital of Hanoi after they organised a fake summit last week.

Vietnamese officials told Howard X that his passport was ‘invalid’, but the Kim Jong-un impersonator disputes this, and believes he was deported because of his ‘sense of humour’.

During the staged faux summit, Howard X, who was sporting an all-black suit, and fellow comedian Mr White told reporters that they were working towards ‘peace’ and hoping to scale down on North Korea’s nuclear weapons through negotiations. 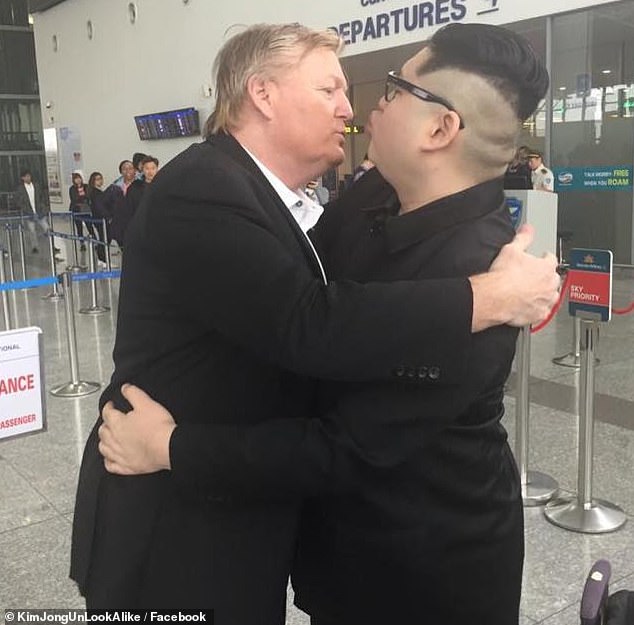 The two were later taken in for questioning before Howard X was escorted to the airport.

Mr White was told he could remain in the country but was warned against making any public appearances as the American president.

Howard X later told AFP: ‘The real reason is I was born with a face looking like Kim Jong-un, that’s the real crime.

‘Satire is a powerful weapon against any dictatorship. They are scared of a couple of guys that look like the real thing.’

He added he had received no explanation from Vietnamese authorities as to why he had been deported. 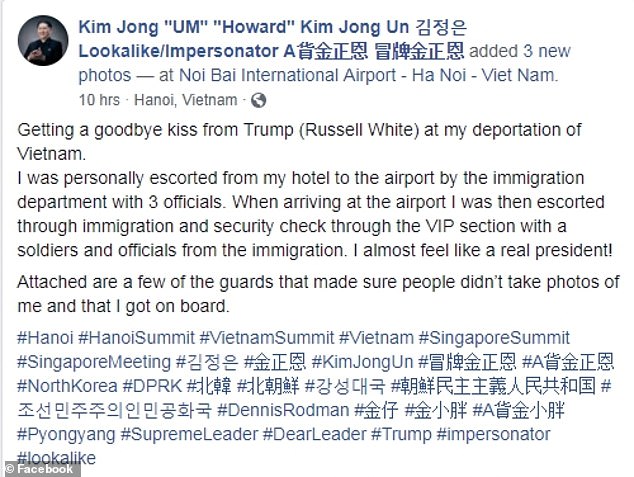 Before his deportation, Howard X posted a picture of himself and Mr White exchanging a kiss at the airport with the following message

Yesterday Howard X posted a picture of himself and Trump impersonator Russell White with the message: ‘Getting a goodbye kiss from Trump (Russell White) at my deportation of Vietnam.

‘I was personally escorted from my hotel to the airport by the immigration department with 3 officials.

‘When arriving at the airport I was then escorted through immigration and security check through the VIP section with a soldiers and officials from the immigration. I almost feel like a real president!’

This is not the first time the comedian has found himself on the wrong side of the law.

In 2018, during the Winter Olympics in South Korea, Howard X was hauled away by security after trying to talk to and dance with North Korea’s cheerleading squad.

The real Donald Trump and Kim Jong-un are set to arrive to Vietnam’s capital on February 27.