Kim Jong-un prepares to walk into history for Korean summit

Kim Jong-un will become the first North Korean leader to step into the South for 65 years as he meets with President Moon for a historic peace summit.

The North Korean dictator will be greeted by Moon on Friday after crossing a military demarcation line on the 38th parallel before the pair are escorted by South Korean honour guards to a welcome ceremony.

They will hold talks in Panmunjom, the peace village where both sides held talks to yield an armistice, but never a formal end, to the Korean War in 1953.

A convoy transporting South Korean President Moon Jae-in leaves the Presidential Blue House for the inter-Korean summit in Seoul, South Korea, in preparation for the summit at Panmunjom on Friday 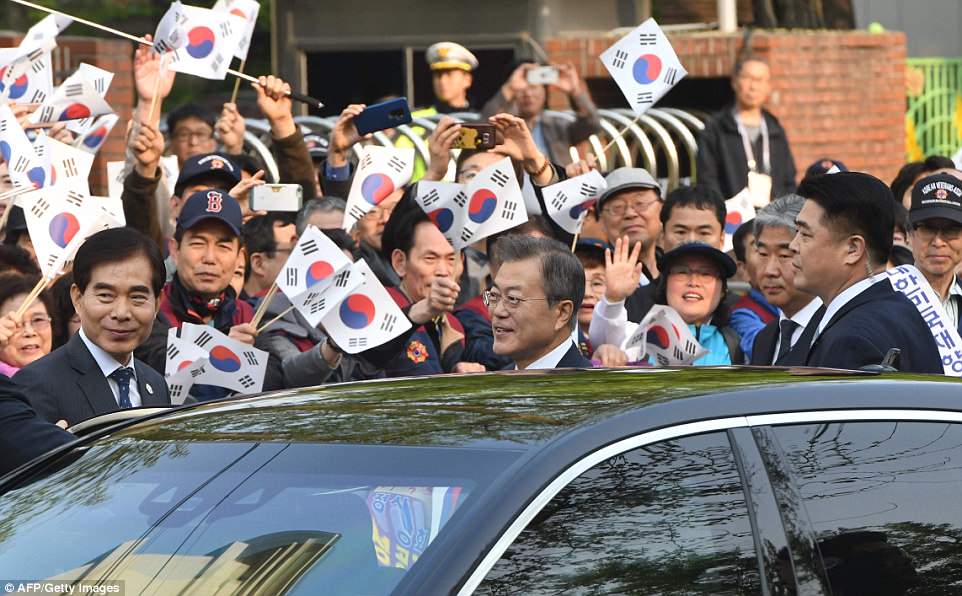 Every detail of the arrangements has been painstakingly thought through, starting with the distance both leaders will sit apart from each other – 2,018 millimeters, in a nod to the current year.

The footbridge that Moon and Kim will walk across has been painted blue, the color of the Korea Reunification Flag and the UN, which runs some of the buildings in Panmunjom alongside the governments of the North and South.

After the end of the first session of at the Peace House, which was built in 1989 and is technically in South Korea, Kim Jong Un and Moon will have lunch separately before holding a tree-planting ceremony in the afternoon.

A pine tree will be planted on the demarcation line using soil from Mount Halla in South Korea and Mount Paektu in the North.

North Korean folklore considers Mount Paektu as the place where the nation’s founder, Kim Il-sung, fought the Japanese after World War Two and his son, Kim Jong-il – the current dictator’s father – was born.

After the tree planting, Moon and Kim will take a walk together in Panmunjom before beginning the next round of talks.

These will take place at a 14-seat table supported by legs which are shaped like two bridges merging.

The seat-backs will be decorated with a map of the Korean Peninsula, while the blue-carpeted room will include a painting of Geumgangsan Mountain in the North done by an artist from the South. 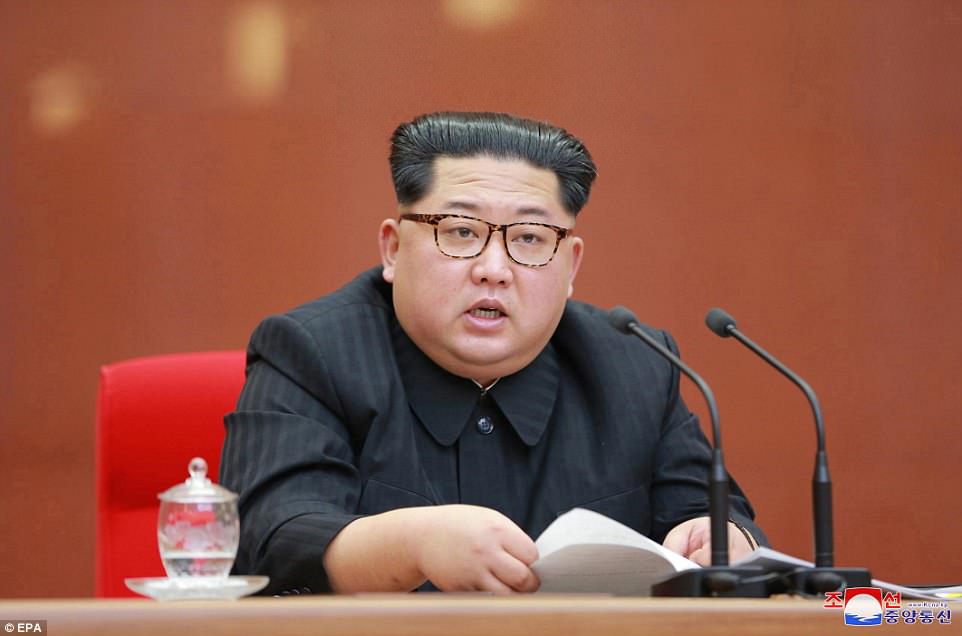 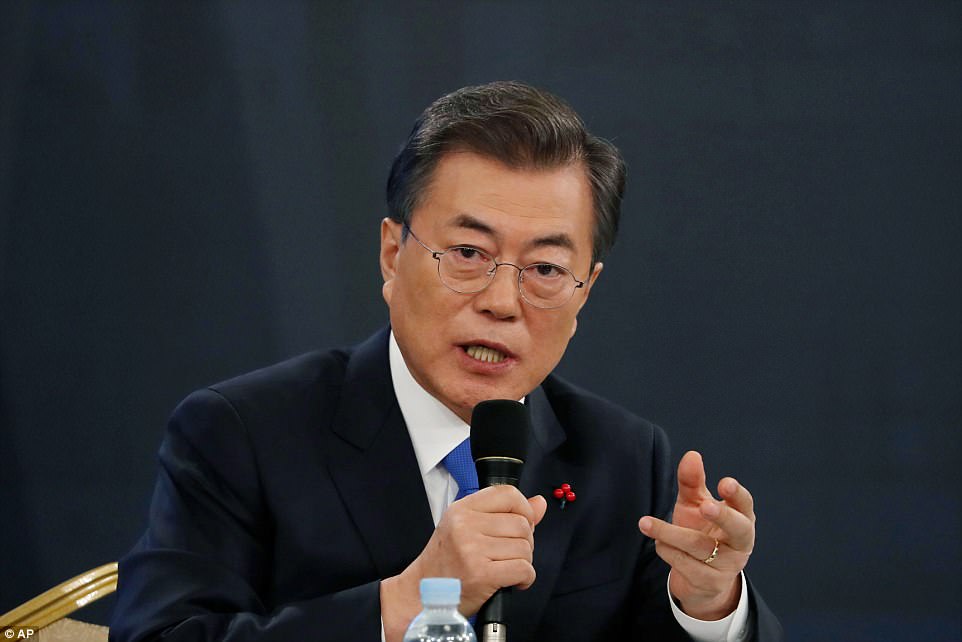 At the end of the talks, Kim and Moon will sign a pact and make an announcement. Later, they will have dinner on the South’s side and watch a video clip themed ‘Spring of One’.

The dinner menu consists of items from the North and South, including a cold noodle dish called naengmyeon, which will be specially prepared by a chef from Okryugwan, one of Pyongyang’s finest restaurants.

The item is said to have been suggested by Moon, and requires a noodle-making machine to be carried over with the North’s delegations so it can be prepared fresh.

The leaders will also dine on John Dory, the favored fish in Moon’s childhood province of Busan, and a Korean take on rosti, the Swiss dish Kim ate while attending school in Switzerland.

The dessert, a mango mousse decorated with a map of the Korean Peninsula, resulted in an official complaint from Japan for showing islands it claims sovereignty over.

Less controversial items on offer include citrus tea and beef from a ranch in South Korea, which became famous in 1998 the founder of Hyundai filled 50 trucks with 500 cattle from the ranch for a peace convoy to the Norht.

The ranch became famous in 1998 when late Hyundai founder Chung Ju-yung filled 50 trucks with 500 cattle and led them across the border to the North in an effort to aid reconciliation between the rivals.

Official dialogue between Kim and Moon will begin at 8.30pm ET Thursday (Friday in Korea) an hour after Kim is scheduled to cross the border.

‘This summit will focus more on denuclearization and securing of permanent peace than anything else,’ Moon’s office said on Thursday.

‘I feel North Korea is sending their key military officials to the summit as they too, believe denuclearization and peace are important.’ 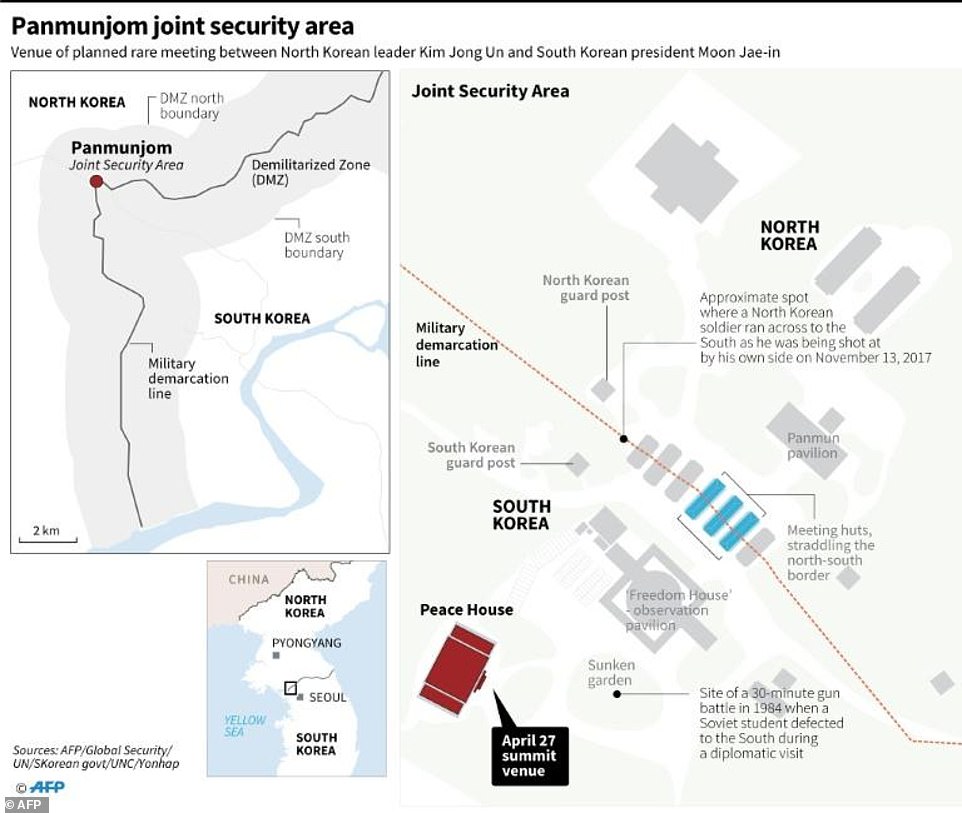 Official dialogue between Kim and Moon will begin at 1030am at the Peace House in Panmunjom, an hour after Kim is scheduled the cross the border at 9.30am 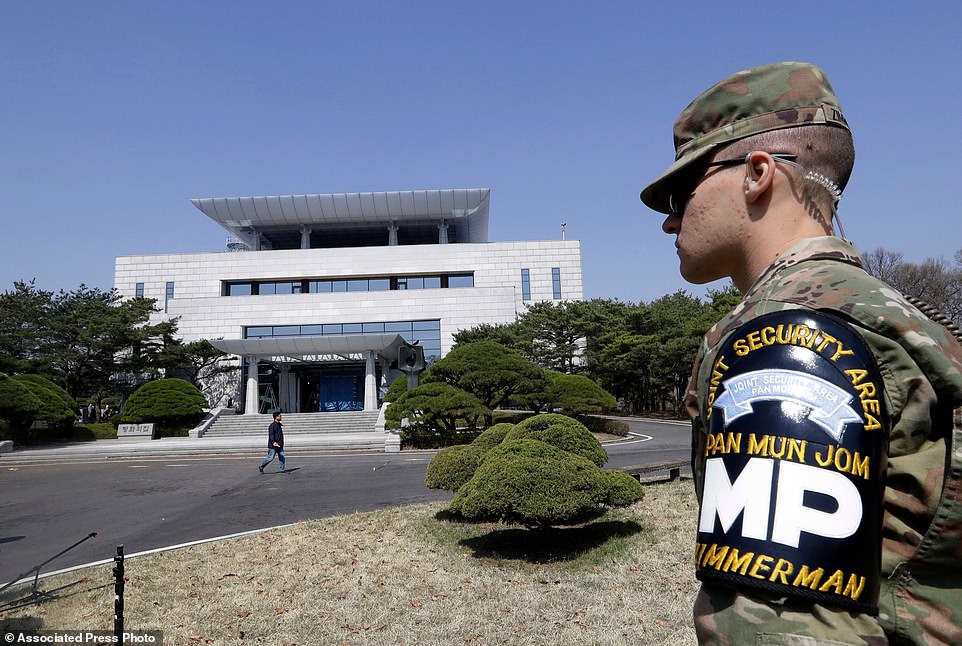 A summit will then take place at Peace House (pictured) in Panmunjom, the border village where the summit is to be held

Kim will be accompanied by nine officials, among them his sister, Kim Yo Jong, who led the North’s delegation to the Winter Olympics in South Korea in February and Kim Yong Nam, the North’s nominal head of state.

In addition, there will be Kim Yong Chol, a former intelligence chief and Choe Hwi, the chairman of a sports panel.

The North sent athletes to the Winter Olympics, where the neighbours also fielded a joint women’s ice hockey team.

Kim Yong Chol was previously chief of the Reconnaissance General Bureau, a North Korean military intelligence agency South Korea has blamed for the deadly 2010 sinking of the Cheonan, a South Korean navy corvette.

Also in the delegation are Ri Su Yong, a member of the North’s politburo and Ri Myong Su, the chief of the general staff of the Korean People’s Army.

South Korea’s delegation is comprised of seven officials, including the ministers for defence, foreign affairs and unification.

The summit is only the third time the leaders of the divided Koreas have met in the 65 years since the end of the Korean War.

The previous meetings were held during a period of rapprochement and were followed by a decade of tense and cold relations.

A tentative thaw began earlier this year with North Korean participation in the Winter Olympics in South Korea’s Pyeongchang.

What happened in the other two North-South summits since 1953?

Friday’s summit between South Korea’s President Moon Jae-in and North Korean leader Kim Jong Un is only the third time the leaders of the divided Koreas have met in the 65 years since the end of the Korean War.

The previous meetings were held during a period of rapprochement and were followed by a decade of tense and cold relations.

A tentative thaw began earlier this year with North Korean participation in the Winter Olympics in South Korea’s Pyeongchang. 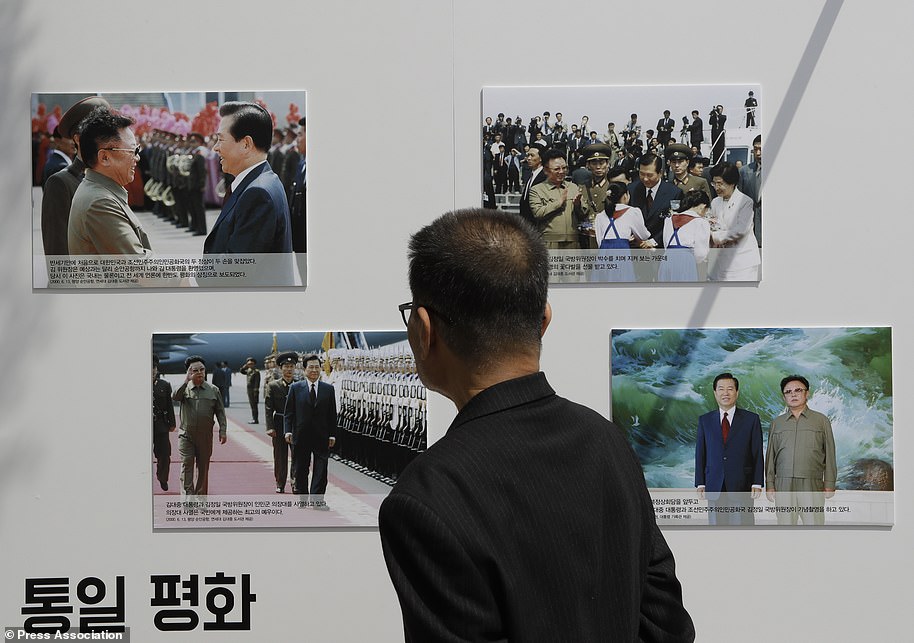 The three-day meeting in June, which began with a broadly smiling Kim Jong Il tightly grabbing the hands of Kim Dae-jung at the Pyongyang airport, led to an agreement between the Koreas on joint economic projects, which have since stalled.

The countries also agreed to resume reunions of families divided between North and South.

Kim Dae-jung won the Nobel Peace Prize later in 2000 for his rapprochement policies with the North. 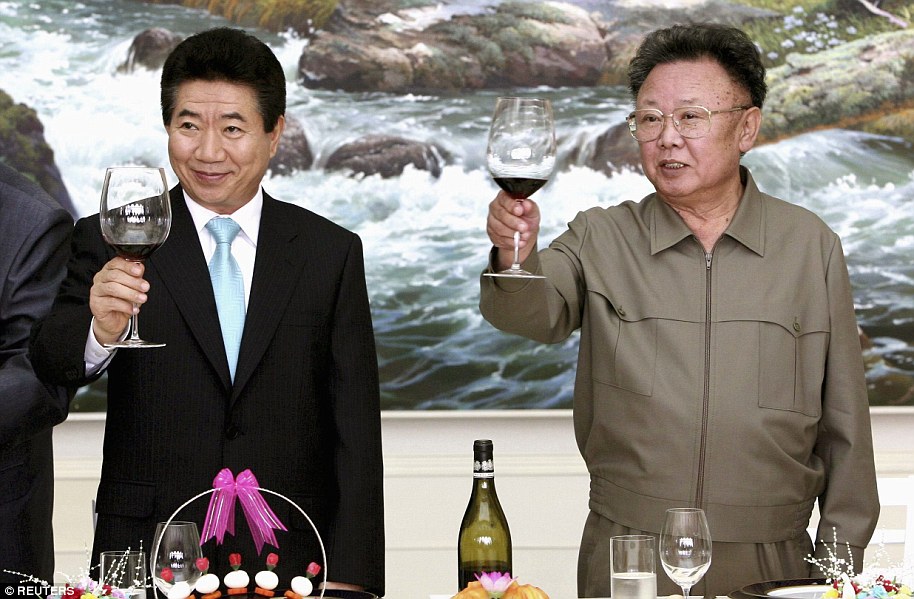 Mr Roh went to Pyongyang after crossing the demilitarised zone in a symbolic moment that grabbed international headlines.

Mr Kim and Mr Roh agreed to pursue a peace treaty to formally end the Korean War and reached a set of cooperation projects.

But most of the accords were shelved after Mr Roh’s single five-year term ended months later and he was replaced by a conservative who took a harder line over the North’s nuclear ambitions.

What’s on the menu for the Korean summit?

The menu for the Panmunjom has been painstakingly planned to combine dishes from the North and South to symbolize the ties between both countries.

Yet despite all the thought that has gone into it, one dish on offer has already provoked a row, as you will read below:

A TOUCH OF SWISS

While not many things are known about Kim’s childhood, one thing Seoul is certain about is that he spent several years in his teens being schooled in Switzerland. That means a lot of Swiss-inspired dishes for Kim at the banquet.

Aside from the Korean twist on rosti, which basically will be fried grated potato from South Korea’s Gangwon province topped with cheese, the South Koreans will serve Swiss chocolate, macaroons and cheesecake in a set of desserts that Seoul’s presidential Blue House has named ‘Memories of Swiss.’ 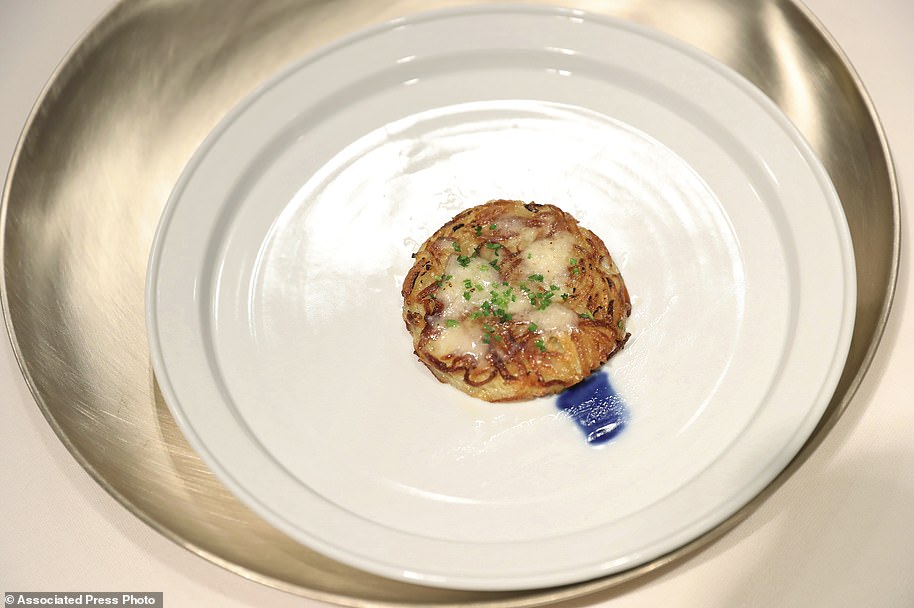 This undated photo provided by South Korea Presidential Blue House on Tuesday shows what the office describes as a Korean ‘re-interpretation’ of the Swiss potato dish rosti, as a nod to Kim’s schooldays in Switzerland

South Korean chefs at the banquet will also serve baked John Dory fish, a tribute to the South Korean port of Busan, where the 65-year-old Moon was born.

Seoul’s presidential Blue House said North Korea has also agreed to bring to the dinner ‘naengmyeon,’ or cold buckwheat noodles, made by the head chef of Pyongyang’s famous Okryugwan restaurant.

They also will serve grilled beef made from cattle at a ranch in the central town of Seosan.

The ranch became famous in 1998 when late Hyundai founder Chung Ju-yung sent 1,001 cattle from the ranch in two separate convoy across the border to the North in an effort to aid reconciliation between the rivals. 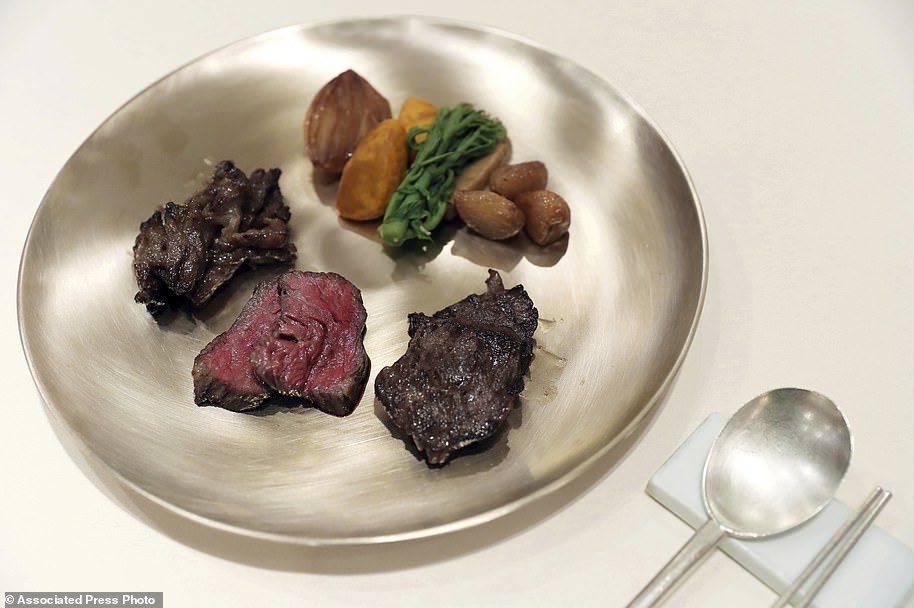 Dessert will be a mango mousse decorated with a blue map symbolizing a unified Korean Peninsula.

The mousse, subtitled ‘Spring of the People’ in a publicity photo, features islands known as Takeshima in Japan and Dokdo in Korea, which lie about halfway between the East Asian neighbours in the Sea of Japan, which Seoul calls the East Sea.

A Japanese Foreign Ministry spokeswoman said: ‘It is extremely regrettable. We have asked that the dessert not be served.’

She added that Japan had lodged a protest over the mousse. 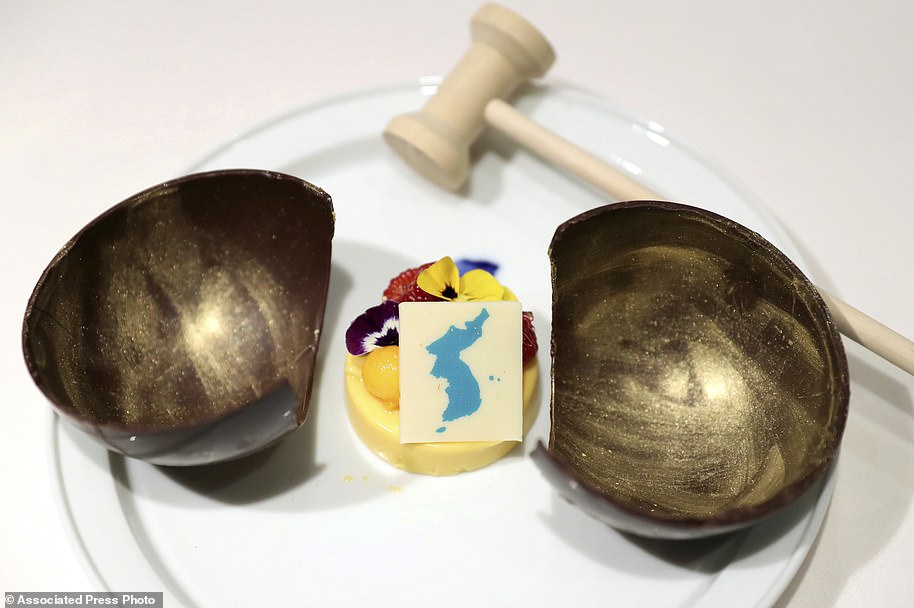 The mousse, subtitled ‘Spring of the People’ in a publicity photo, features islands known as Takeshima in Japan and Dokdo in Korea, which lie about halfway between the East Asian neighbours in the Sea of Japan, which Seoul calls the East Sea