North Korean leader Kim Jong Un hosted a massive celebration to congratulate his nuclear scientists and technicians who steered the country’s sixth and largest nuclear test a week ago, its official news agency said on Sunday.

Kim and his wife, Ri Sol-Ju, gathered top scientists, including Ri Hong Sop and Hong Sung Mu, to celebrate what he called a ‘perfect success in the test of H-bomb’.

The blast, which came weeks after the country fired off two intercontinental ballistic missiles (ICBMs) that appeared to bring much of the mainland US into range, prompted global condemnation and calls to ramp up sanctions against the isolated nation.

The United States and its allies had been bracing for another long-range missile launch in time for the 69th anniversary of North Korea’s founding on Saturday, but no fresh provocations were spotted while the North held numerous events to mark the holiday.

Kim Jong-un (center with his wife, threw a banquet to laud the nuclear scientists and other top military and party officials who contributed to the nuclear bomb test last Sunday 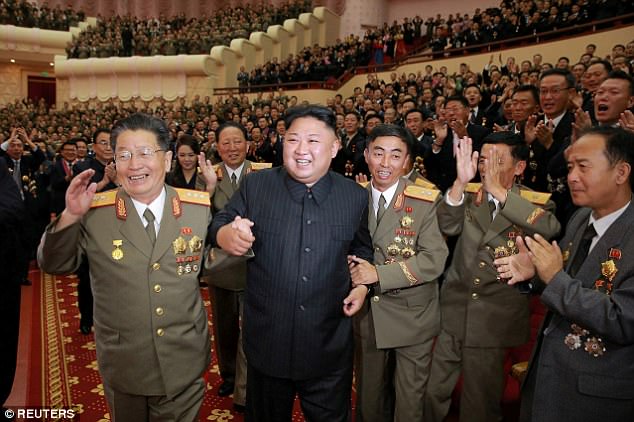 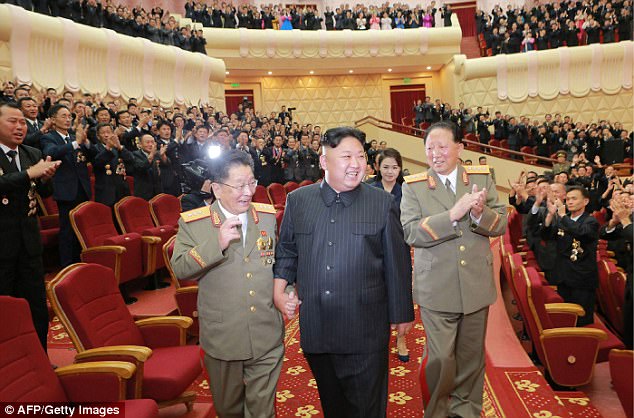 Ri (left) and Hong (right) have played vital roles in the North’s nuclear program, appearing at close distance to Kim during field inspections and weapons tests 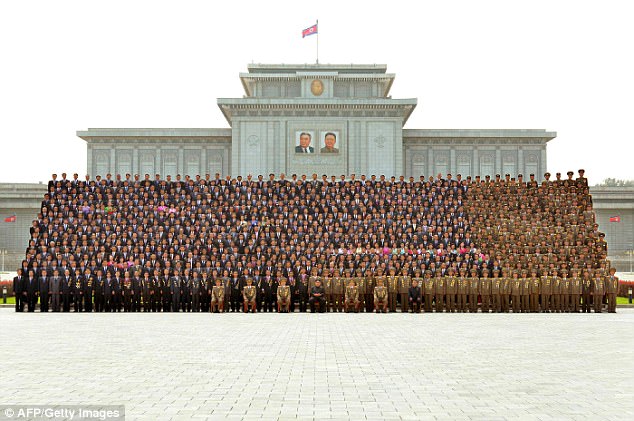 orth Korean leader Kim Jong-Un attending a photo session with nuclear scientists and technicians, who worked on a hydrogen bomb which the regime claimed to have successfully tested, at the Kumsusan Palace of the Sun in Pyongyang

Throughout last week, South Korean officials had warned the North could launch another intercontinental ballistic missile in defiance of UN sanctions and amid an escalating standoff with the United States.

Washington told the UN Security Council on Friday to call a meeting on Monday to vote on a draft resolution establishing additional sanctions on North Korea for its missile and nuclear program.

Japanese Defence Minister Itsunori Onodera said it was vital to put pressure on North Korea through additional sactions, including blocking or slowing its fuel supplies.

‘If we put firm pressure on North Korea such that it realises it cannot develop missiles, it will accept dialogue and we can progress with diplomatic efforts,’ Onodera told public broadcaster NHK on Sunday. ‘Unless we firmly apply pressure, North Korea will not change its direction.’

KCNA said Kim threw a banquet to laud the nuclear scientists and other top military and party officials who contributed to the nuclear bomb test last Sunday, topped with an art performance and a photo session with the leader himself.

KCNA did not specify when the banquet had been held, but analysts said it had likely been on Saturday.

The banquet, concert and performance to celebrate the September 3 nuclear test, were held in Pyongyang.

The North’s leader appeared deaf to the international outrage and hailed the ‘perfect success in the test of H-bomb’ at the dinner. 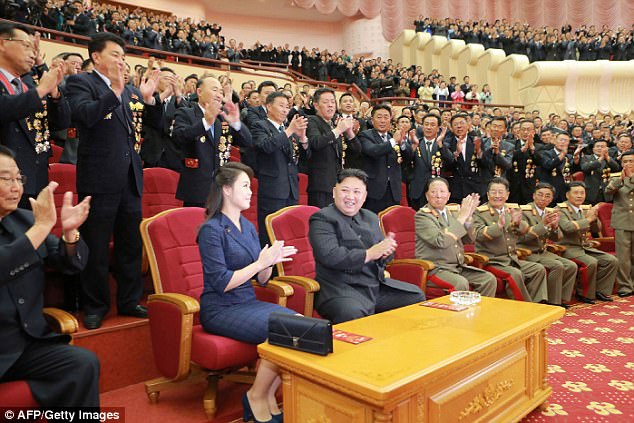 Kim and his wife, Ri Sol-Ju, attended an art performance as part of the ceremony. KCNA did not specify when the banquet had been held, but analysts said it had likely been on Saturday 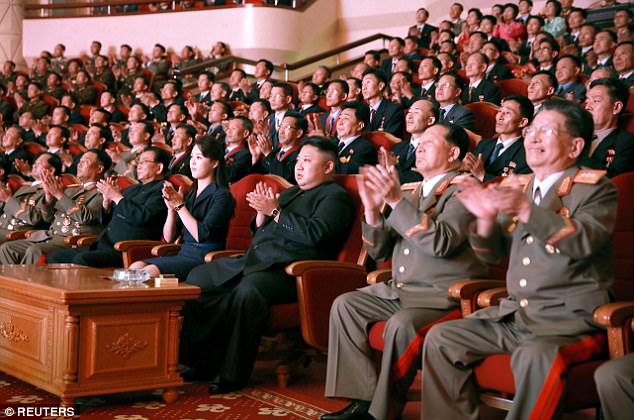 The banquet was in celebration for their latest nuclear test, which North Korea had said was an advanced hydrogen bomb 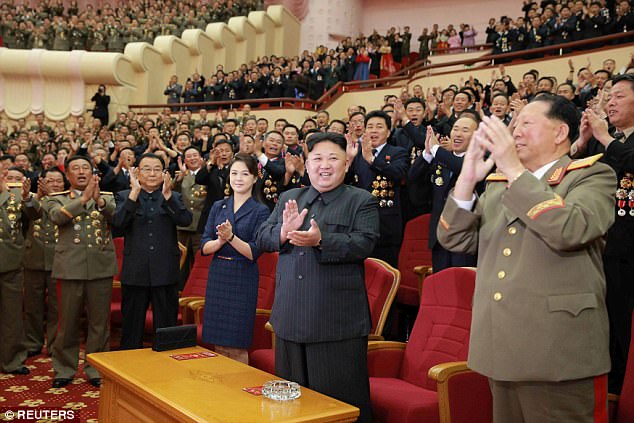 Dubbing the latest test the ‘great auspicious event of the national history’, he called for ‘redoubled efforts’ to complete the country’s mission to fully become a recognised nuclear power.

Ri and Hong have played vital roles in the North’s nuclear program, appearing at close distance to Kim during field inspections and weapons tests, including the latest nuclear test.

Kim was also pictured with his wife, Ri Sol-Ju, who disappeared for an extended period last year, raising speculation that she could be pregnant.

South Korean media announced last month that Ri had given birth to the couple’s third child.

North Korea had said the latest test was an advanced hydrogen bomb.

There was no independent confirmation but some Western experts said there was enough strong evidence to suggest the reclusive state has either developed a hydrogen bomb or was getting very close.

KCNA said on Sunday the scientists and technicians ‘brought the great auspicious event of the national history, an extra-large event through the perfect success in the test of H-bomb’. 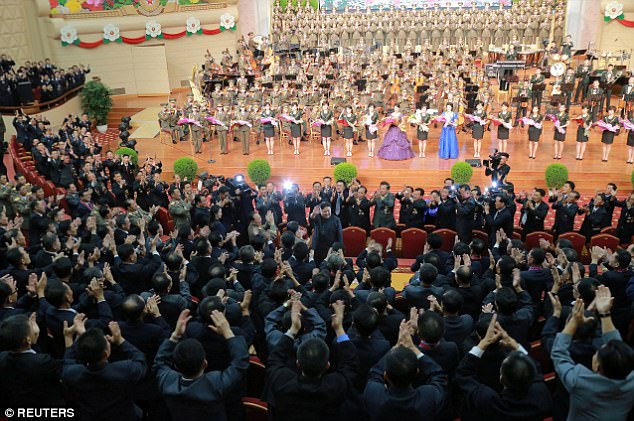 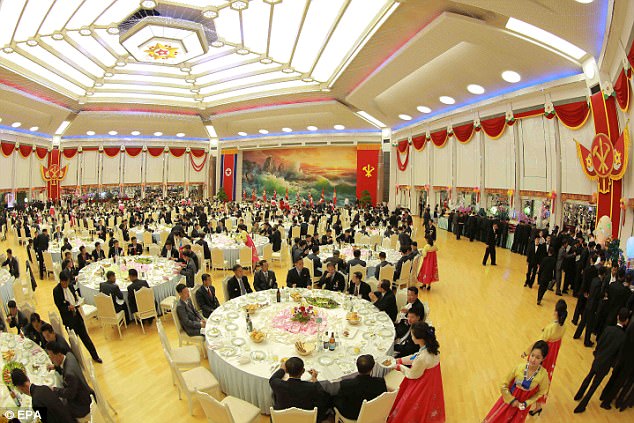 A general view of an event in Pyongyang to celebrate the latest nuclear test, Pyongyang, North Korea

Kim praised the developers in his own remarks as ‘taking the lead’ in attaining the ‘final goal of completing the state nuclear force’ in line with his parallel pursuit of nuclear and economic development.

‘The recent test of the H-bomb is the great victory won by the Korean people at the cost of their blood while tightening their belts in the arduous period,’ Kim was quoted as saying.

Ri and Hong’s roles have also been noted overseas, prompting the United Nations, the United States or South Korea to blacklist them.

Aside from the elite, rank-and-file North Koreans also commemorated the anniversary on Saturday by visiting the Kumsusan Palace of the Sun, which houses the embalmed bodies of founding father Kim Il Sung and his son and successor Kim Jong Il.

KCNA said service personnel and civilians, including children, laid floral baskets and bouquets at the statues of the deceased leaders across the country, while enjoying art performances and dancing parties.

Pyongyang says it needs nuclear arms to protect itself, but the US has accused the isolated nation of ‘begging for war’.

In an interview published on Sunday United Nations Secretary General Antonio Guterres said the showdown over North Korea’s nuclear and missile programme was the world’s worst crisis ‘in years’ and had left him deeply worried.

‘We have to hope that the seriousness of this threat puts us on the path of reason before it is too late,’ said Guterres in the French Sunday newspaper Le Journal du Dimanche.

He also called for unity in the UN Security Council, which is set to consider a new draft resolution presented by Washington in recent days that would be the toughest-ever imposed on North Korea.

The US is calling for an oil embargo on the North, an assets freeze on Kim Jong-Un, a ban on textiles and an end to payments of North Korean guest workers.

It is hoping for a Monday vote though both China and Russia are thought to have raised opposition to the measures.