Their six-year marriage is reportedly under more strain than ever.

But following Kim Kardashian West’s dramatic reunion with husband Kanye West on Monday, in exclusive pictures revealed by DailyMail.com, reports have suggested that the super couple have actually been growing distant for almost a year now.

Kanye, 43, who launched a controversial and unlikely presidential campaign this month, is said to have been based at his $14 million Wyoming ranch this past year, while Kim, 39, would visit only once a month with their four children North, seven, Saint, four, Chicago, two, and Psalm, one.

Separate lives? Kanye West and Kim Kardashian have reportedly been living apart for the past year as he’s been based full-time at his $14 million ranch in Cody, Wyoming (Pictured: 2019)

DailyMail.com has reached out to representatives for the reality star over the latest reports of the couple leading separate lives.

‘Kanye has been in Wyoming for the last year. Kim goes about once every five weeks and brings the kids,’ one source told UsWeekly, adding: ‘they haven’t been spending time together because he moved his life completely to Wyoming and that’s not where their life is, their family is, their kids are in school or the larger family is.’

Meanwhile, it was reported yesterday that Kim has been thinking they ‘need to be apart’ right now, according to PEOPLE.

Tense reunion: DailyMail.com revealed the couple had reunited in Wyoming on Monday where they held marriage crisis talks

A source told the outlet: ‘She knows that it’s not healthy for her to be around him now, and it’s honestly not healthy for the kids. He needs to get his stuff together before he can be any sort of partner or father.’

Another report added that Kanye lives ‘full time’ in Wyoming as it is ‘best for his creativity’ according PageSix.

Kim is also said to have urged Kanye to quit his bid for presidency, which lead him to a disastrous first campaign rally in North Charleston, South Carolina, where he claimed that he and his wife has considered aborting their first baby, daughter North.

On Tuesday, Kim was seen heading straight back into work mode after her tense reunion with Kanye, as she arrived at a studio in Los Angeles for a photoshoot for her SKIMS range, leaving Kanye behind in Wyoming. 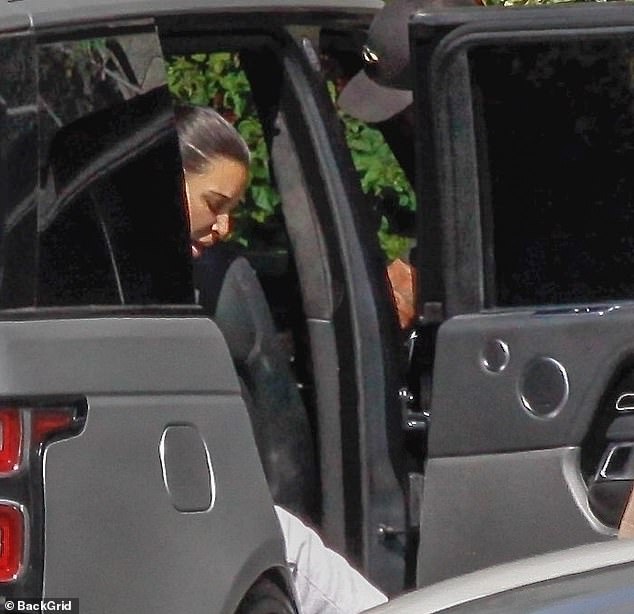 Back in work mode: After the tense reunion, Kim was pictured getting straight back to work as she attended a photoshoot for underwear line SKIMS in Los Angeles on Tuesday

‘Kim feels trapped,’ a source added to PEOPLE. ‘She loves Kanye and she thinks of him as the love of her life. But she doesn’t know what to do.’

However, multiple outlets have reported that the couple do not want to get divorced.

Yet Kanye is still eager for his presidential bid to become a reality, after making another last-ditch attempt to get on another ballot in Missouri earlier this week, and is said to have hired top political advisers.

Visits: Kim, 39, reportedly only visits Kanye in Wyoming once a month with their four children North, seven, Saint, four, Chicago, two, and Psalm, one

He said sorry: However, Kanye apologized to his wife in a tweet last week, amid reports that he went to hospital to be treated for anxiety

However, Kanye apologized to his wife in a tweet last week, amid reports that he went to hospital to be treated for anxiety.