Kim Kardashian has been branded a hypocrite for hiring Mario Testino who was accused of sexual exploitation by male models months after she condemned ‘inexcusable behavior’ by her own photographer.

Famed for his work with Princess Diana and the Royal Family, Testino was once a favorite of the fashion world, shooting more than 60 covers for British Vogue. But last year he was suspended from working with magazines including Vogue, amid allegations that he sexually exploited male models and assistants.

Online fashionistas have reacted furiously to Kim’s willingness to work with Testino despite applauding alleged victims of her personal photographer Hyde in July.

Instagram account Diet Prada – which counts Lottie Moss and Chrissy Teigen among its 1.6million followers – juxtaposed the two posts by Kim. One condemning Hyde in July and another gleefully tagging Testino last week.

Kim Kardashian poses with daughter North in Mario Testino shoot in one of her latest Instagram posts, a year after the photographer was banned from Vogue following allegations he sexually exploited models 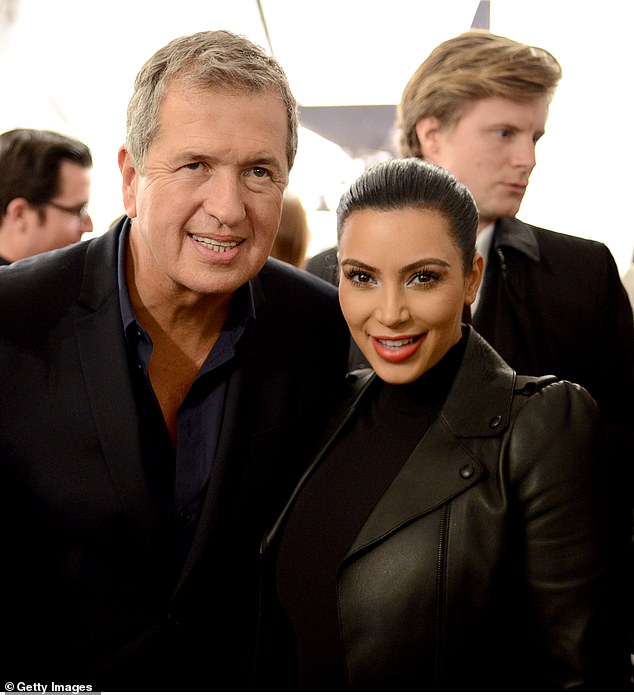 Mario Testino and Kim Kardashian attend a Private Reception For Mario Testino at PRISM on February 23, 2013 in West Hollywood, California 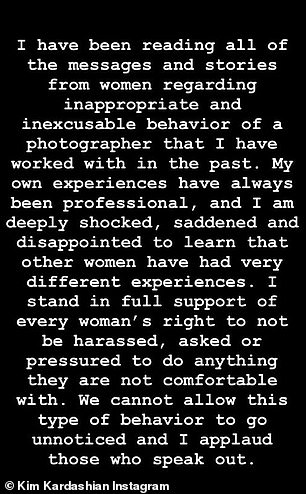 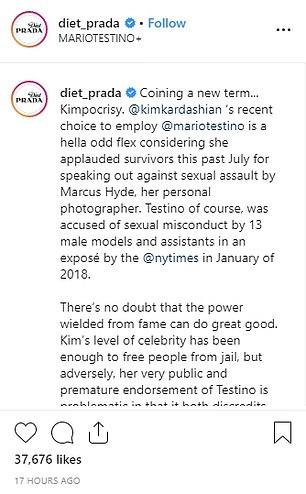 Online fashionistas have reacted furiously to Kim’s decision to work with Mario Testino, after she spoke out against her personal photographer Marcus Hyde and said she condemned his behavior which had ‘shocked, saddened and disappointed’ her (pictured: Instagram account Diet Prada, right, – followed by the likes of Lottie Moss and Chrissy Teigen – juxtaposed two posts by Kim Kardashian, one of her work with Testino and another condemning Hyde in July, left)

The Kardashian said she was ‘deeply shocked, saddened and disappointed’ following allegations Hyde demanded models send him nude photos in return for shoots.

Via Instagram Stories she showed her support for the women who came forward with claims about Hyde, saying she stands by them. She worked with Hyde multiple times over the years.

Meanwhile Testino was accused of sexual assault by eight men – assistants and male models – in a New York Times piece. Five others later came out to make similar accusations.

The paper made claims against Testino and his fellow photographer Bruce Weber in a New York Times article.

At the time lawyers for Testino said the accusers ‘cannot be considered reliable sources’, while Weber also denied any wrongdoing.

Kim’s shoot with Testino comes as the photographer appears to be staging a comeback.

Last week, Testino was in Mayfair, London, with his loyal friend Kate Moss to reveal his new photographs at Hamiltons Gallery. 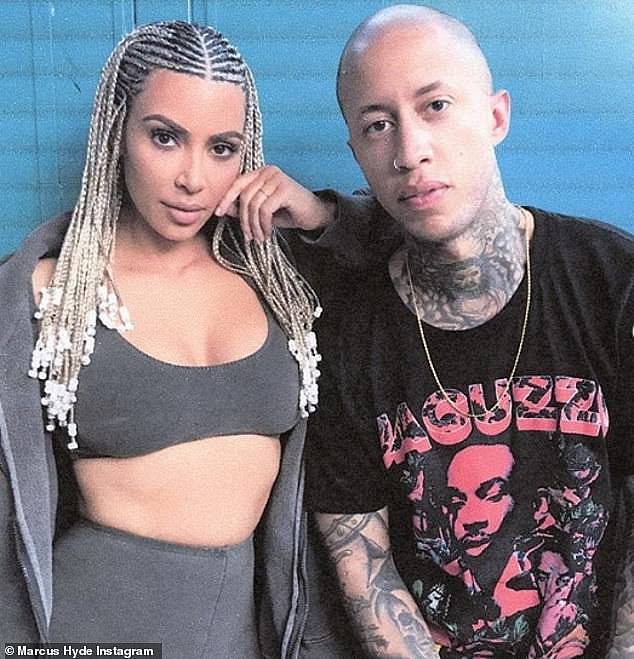 Kim’s shot with North is black and white and shows the two laughing happily, as they roll around on a couch at their home together. ‘Best Friends!’ Kim captioned the image, in which she wears just a robe.

After the allegations Testino was dropped by Vogue publisher Conde Nast ‘for the foreseeable future’, while Vogue’s editor-in-chief Anna Wintour, said in a statement that the claims had ‘been hard to hear and heartbreaking to confront’.

Last month, Testino shared a picture from his Kardashian shoot to his own Instagram page and said Kim approached him about taking portraits of her family. 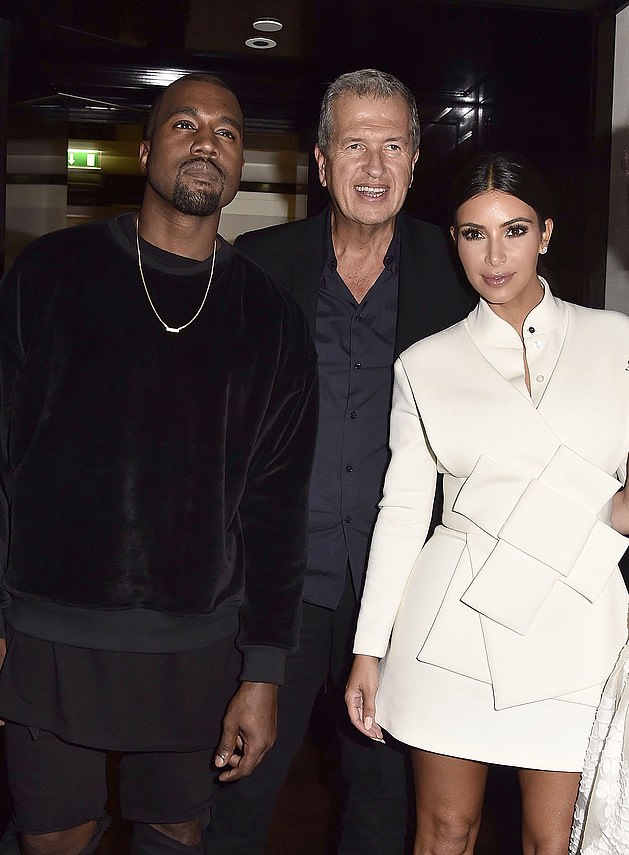 Fashion world darling: Mario poses with Kanye West and Kim back in 2014 before the allegations surfaced

‘TOWEL SERIES 153, KIM KARDASHIAN WEST,’ he labeled the image, explaining: ‘I always wanted to do a Towel Series with Kim, but it wasn’t until she asked me to do a portrait of her and her family that I had the chance.

‘When I arrived at their house, she was wearing a bathrobe and nothing else, but I thought it just looked so perfect. I had to capture it. I asked her if I could photograph only her first, wearing this robe.

‘She has such an amazing power in her body that people sometimes forget that she is also so kind and gentle.’

Kim, 39, has known Testino for years – they were pictured together in Paris back in 2014.