Kim Kardashian has broken her silence on Tristan Thompson’s betrayal of her sister Khloe Kardashian.

‘Like I don’t even know how to describe it besides it’s just so f***ed up,’ she said of the NBA star’s infidelity, which was first revealed by DailyMail.com just days before Khloe gave birth.

Talking to Ellen DeGeneres in an interview screened on Monday but thought to have been taped a week ago, Kim said the new mom was ‘doing the best that she can.’

‘It’s so f***ed up!’ Kim Kardashian breaks her silence on Tristan Thompson’s cheating as she says new mom Khloe is ‘doing the best she can’ on Ellen

‘Poor Khloe. We really were rooting for Khloe and we still are,’ the reality star told Ellen.

‘You know she’s so strong and she’s doing the best that that she can. It’s a really sad situation all over.’ 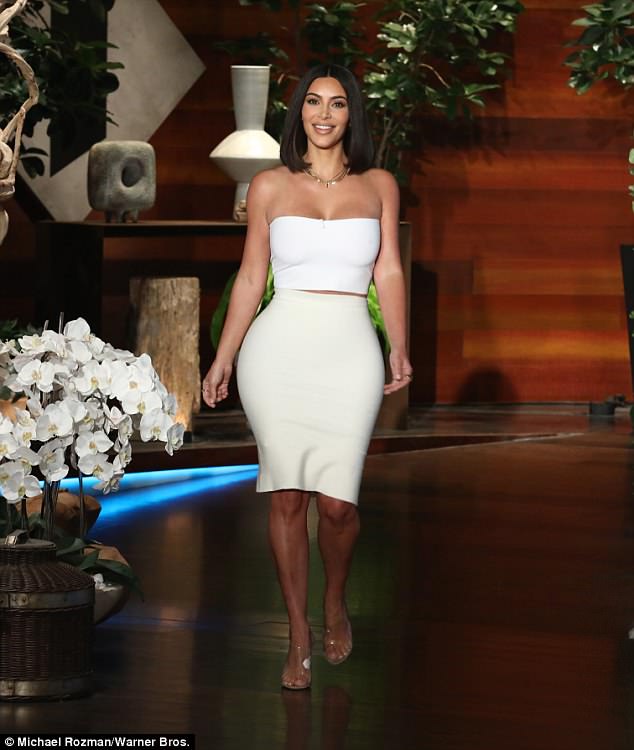 Speaking out: The comments are the first time Khloe’s family directly addressed the betrayal 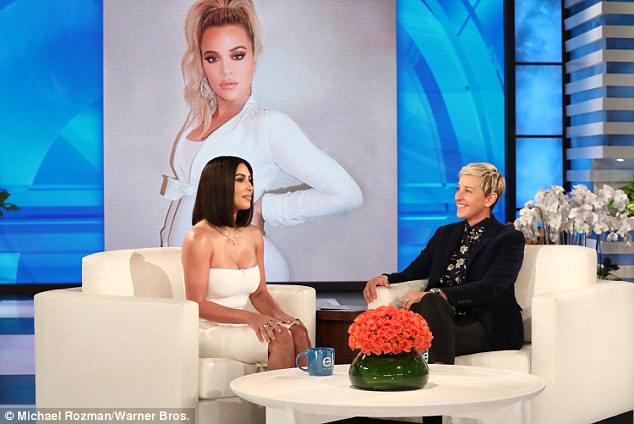 Watching her words: Kim said she was aware that True might one day see the show

‘I made this rule with my brother [Rob, following his break up with Blac Chyna that] if there’s a baby involved I’m gonna keep it cute and keep classy and not talk too negative. Because one day True’s gonna see this and it’s just so messed up.’

For her part Ellen didn’t hold back when addressing Thompson’s infidelity.

‘I think everybody was heartbroken for her,’ she said. ‘Literally days before she gives birth her boyfriend is seen on video cheating.’

Kim also addressed Kanye’s return to Twitter, although her comments came before his recent Trump-supporting outbursts, which have divided his surprised fanbase. 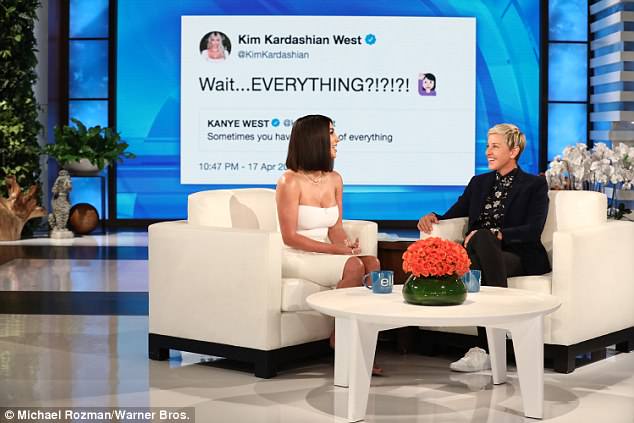 Having a laugh: Kim also addressed Kanye’s return to Twitter, although her comments came before his recent Trump-supporting outbursts, which have divided his surprised fanbase

‘And then at night he came in and he was like ‘Did you see my tweets?’ And I was like “Yes I did see your tweets.”‘

To laughter from the audience she explained: ‘And I followed him back and I wake up and I see…’

The tweet Kim was referring to was Kanye’s April 17 message, with the rapper writing: ‘Sometimes you have to get rid of everything.’ 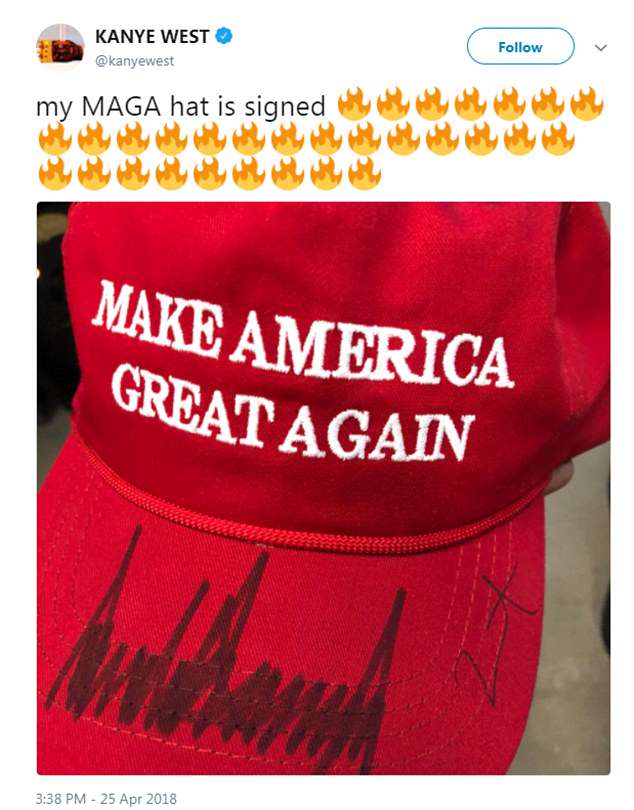 Controversial: Kanye upset many fans with his support of Trump on Thursday 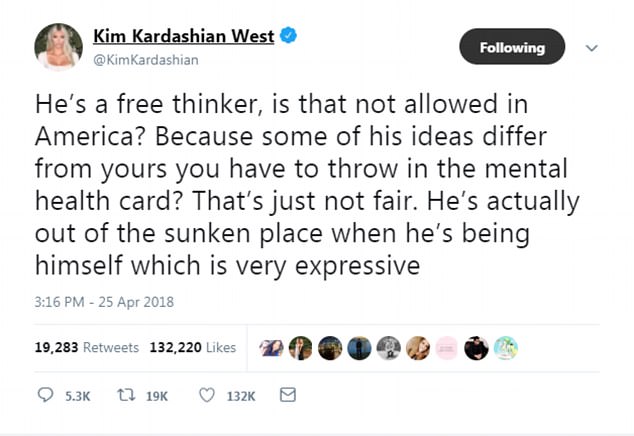 Defensive: Kim has stood by Kanye following the upset over his political views

In reply Kim trolled her husband on Twitter, joking with pal Chrissy Teigen about borrowing on air mattress.

She told Ellen that her husband of four years didn’t really want to give away all their belongings.

‘I mean I hear him saying all these things in the house. I think what he was saying… he was talking about clarity.  He always talks about how we shouldn’t have our phones in the house in the morning when we are with our kids. It’s our rule that we really try to live by.

‘So I think he was talking about cleansing.’ 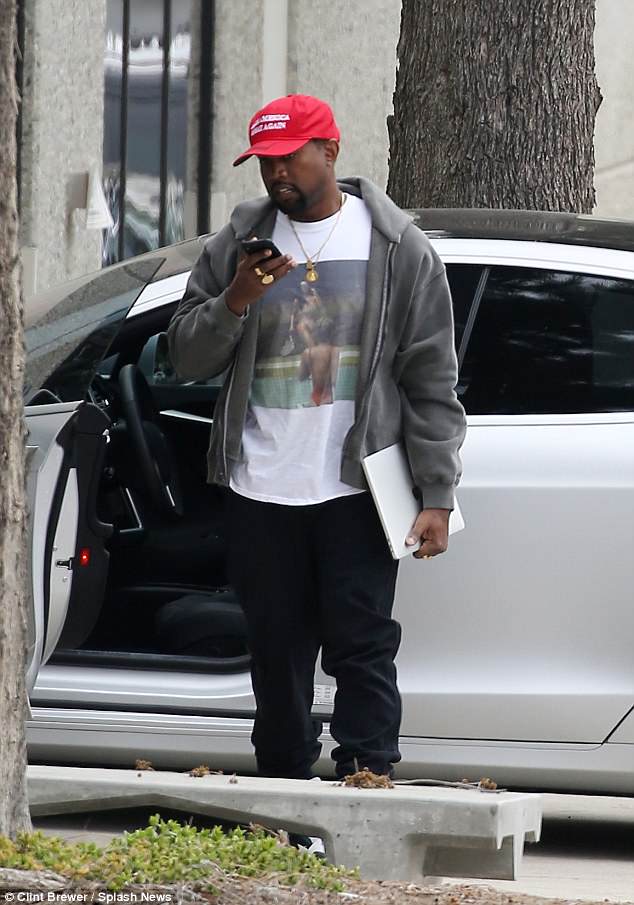 Not backing down: Kanye was out in his signed Maga hat again on Friday in Los Angeles