Kim Kardashian continues to fight on behalf of people impacted by the Santa Susana Field Lab in their battle to get NASA and Boeing to clean up the area in Southern California.

A night after she was seen attending a Rock the Cleanup event on Keeping Up with the Kardashians, the reality star took to Twitter with a series of statements about the ongoing situation near Simi Valley, California, which entails a battle between residents, and organizations including NASA and Boeing (who owns the part of the area the abandoned lab sits on).

Many longtime residents, both children and adults, have battled cancer amid concerns it was caused by contamination from a partial nuclear meltdown that occurred at a local lab 60 years ago, and has yet to be fully cleaned up.

Focused: Kim Kardashian, 39, continues to fight on behalf of people impacted by the Santa Susana Field Lab in their battle to get NASA and Boeing to clean up the area in Southern California

‘The timing of our Keeping Up With the Kardashians episode last night talking about Santa Susana is synergistic,’ Kim, 39, tweeted Monday evening. ‘NASA has agreed legally to pay for the clean up knowing this was their test sight where they would test rockets but is now trying to back out.’

She continued: ‘NASA is attempting to break out of its cleanup agreement and leave most of its contamination not cleaned up. The public can weigh in on their plan by sending in comments to NASA by December 9.’

Kardashian referred back to the episode that aired Sunday, in which she and Kourtney spoke with cleanup activists about the long-delayed cleanup of the area, and the negative impact it had on the health of residents in the area.

‘On this week’s episode we met with Melissa Bumstead, who is fighting to clean up a toxic site which she believes gave her daughter cancer,’ she wrote. 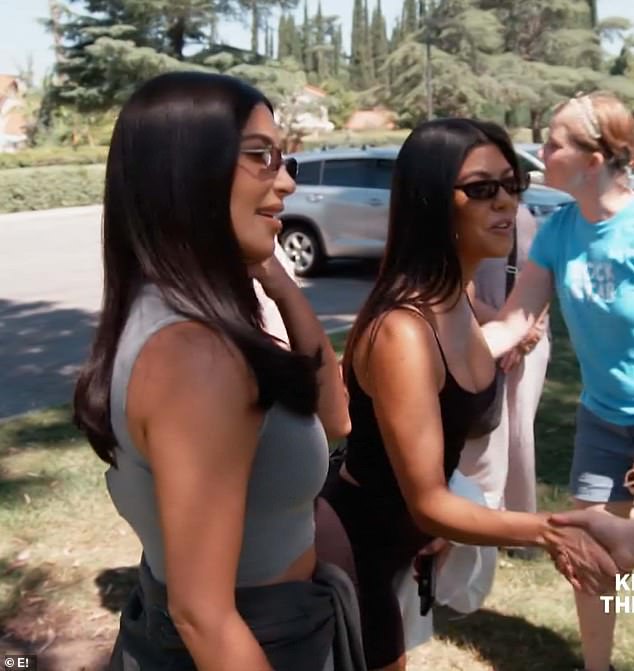 Activism: Kim was seen attending a Rock the Cleanup event on Keeping Up with the Kardashians with her sister Kourtney 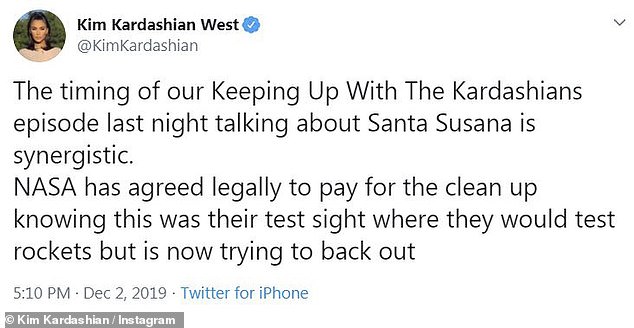 Using her voice: The reality star took to Twitter with a series of statements about the ongoing situation near Simi Valley, California

Kim added: ‘She’s one of several parents who need your help pressuring @NASA to clean up the site,’ adding a link to a site detailing the issue.

‘After last night’s episode, we received an outpouring of interest in the clean up of the Santa Susana Field Lab. The moms fighting to protect their kids need your help.’

In the episode, Kim and Kourtney also chat with California State Sen. Henry Stern about how to bring awareness to the area and relief to its residents.

Powerful: Kim shared a link to those interested in backing the cause 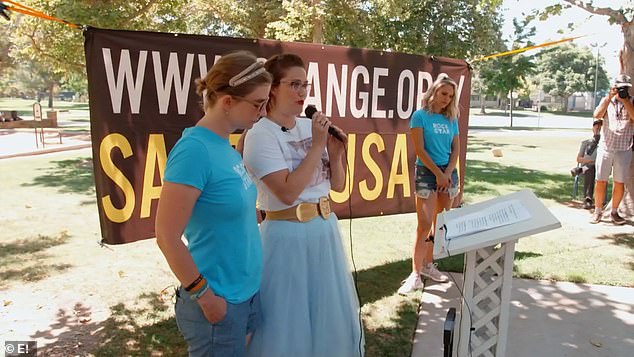 Touching: Activists gathered for a rally to get the area cleaned on Sunday’s KUTWK 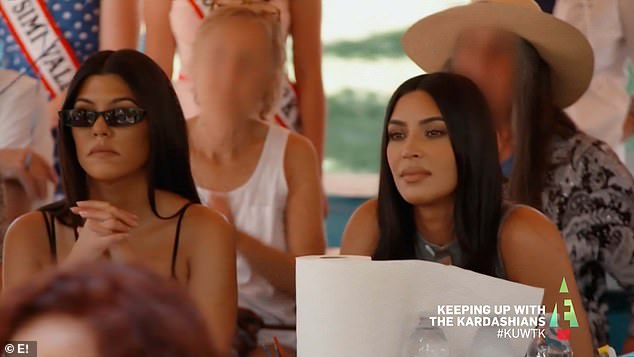 Empathetic: Kim and Kourtney listened intently to people at the emotional event

After she spoke of the issue on her social media, California Sen. Dianne Feinstein and six Congress members sought a ‘full cleanup in a timely manner’ of the area in a letter, though nothing has yet been done.

Kim has taken her concerns about the area all the way to the Oval Office, addressing President Donald Trump about the issue, the Los Angeles Daily News reported Monday.

NASA and the federal Department of Energy in 2010 agreed to a pact that the area would be fully cleaned up by 2017. NASA Inspector General’s Office has since said that the task is impossible to complete.