Kim Kardashian and her family was given just one hour to evacuate her home as wildfires swept through California.

The reality TV star flew back from San Quentin to LA after a ‘business trip’ about a death row inmate and was told she and her three children had to quickly flee the devastating blazes.

As the 38-year-old  came into land in her private plane she took aerial videos and pictures of the flames spreading around the around Los Angeles and Ventura County.

The star has asked her fans to ‘pray for Calabasas’ after the reality TV star was ‘evacuated’ from her home due to wildfires.

High drama: Kim Kardashian has asked her fans to ‘pray for Calabasas’ after the reality TV star was ‘evacuated’ from her home due to wildfires 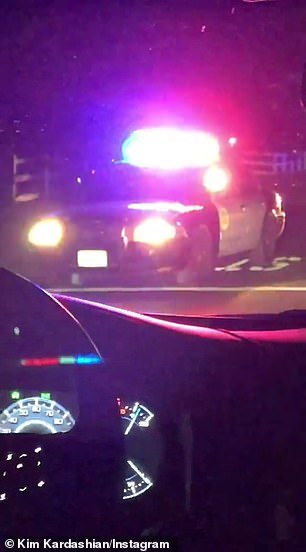 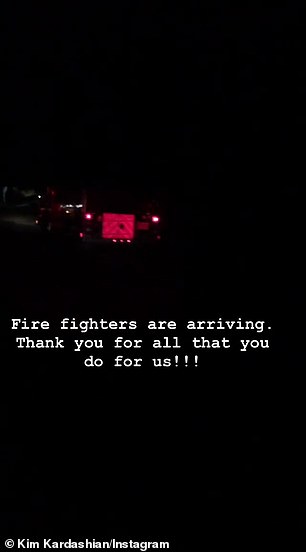 Firestorm: And once on the ground, Kim made sure to document the action, sharing pictures and videos of first responders to the tragedy 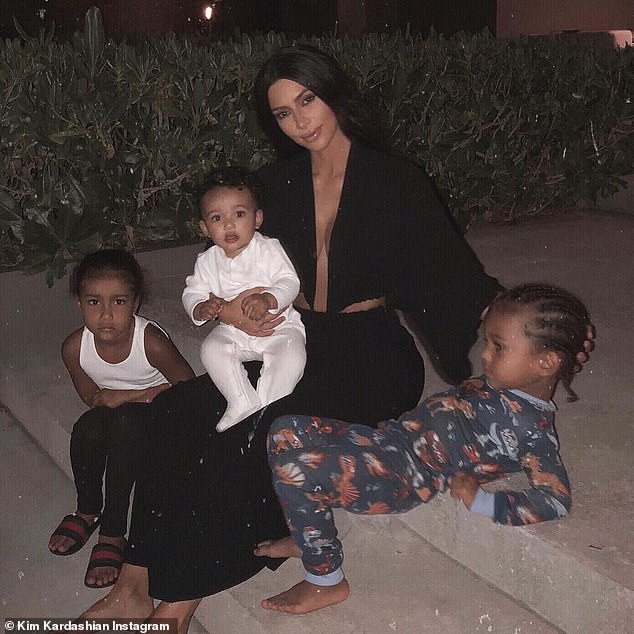 The socialite was returning from a business trip when she spotted the fires from the air. Seen here with kids [L-R] North, Chicago and Saint. She shared this picture of her children last night

She took to Instagram to share aerial photos of the Woosley fire in California and praise the efforts of firefighters.

However once she landed, Kim revealed she only ‘had 1 hour to pack up & evacuate our home’.

The socialite was returning from a business trip when she spotted the fires from the air.

And once on the ground, Kim made sure to document the action, sharing pictures and videos of first responders to the tragedy.

‘Fire fighters are arriving. Thank you for all that you do for us!!!’ wrote the mother-of-three.

Kim and rapper Kanye West’s 15,000 sqft estate in Hidden Hills is thought to be worth around $20million. 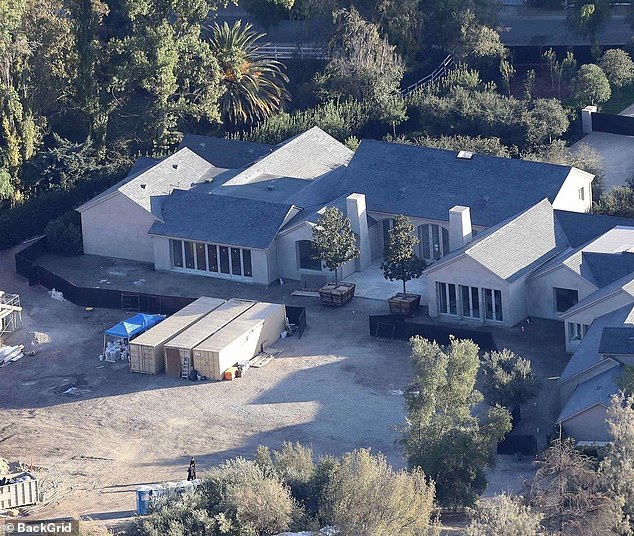 Kim Kardashian and Kanye West’s $20m home in the Hidden Hills neighborhood in Calabasas. She was forced to flee with her children as wildfires swept Los Angeles and Ventura County

The fire first erupted Thursday afternoon east of neighboring city Chatsworth and has since grown to 4,000 acres in Ventura County.

It rapidly burned down several houses as mandatory evacuations were ordered in areas like the Kardashian neighborhood of Hidden Hills.

Kim and her sister Kourtney, 39, both live in exclusive Calabasas, near their mother Kris Jenner and brother Rob, all of whom would of had to evacuate if they were in their properties last night.

Kourtney left her Calabasas home and posted an Instagram  picture of suitcases in her caras she went to stay with sister Kendall Jenner’s house in Beverly Hills.

She wrote alongside the picture: ‘I pray that everyone is kept safe and protected from these fires. No Calabasas tonight.’

It is not known if Rob Kardashian was home at the time of the fires, but he would have to also leave his home as he lives near Kris.

The Kardashian/West family live just around 13 miles from Thousand Oaks, where the night after a mass shooting left 12 dead, fires have threatened to rip through the community.

Smoke could be seen over the area where a vigil was held last night for the victims of the shooting at the Borderline Bar and Grill on Wednesday night. 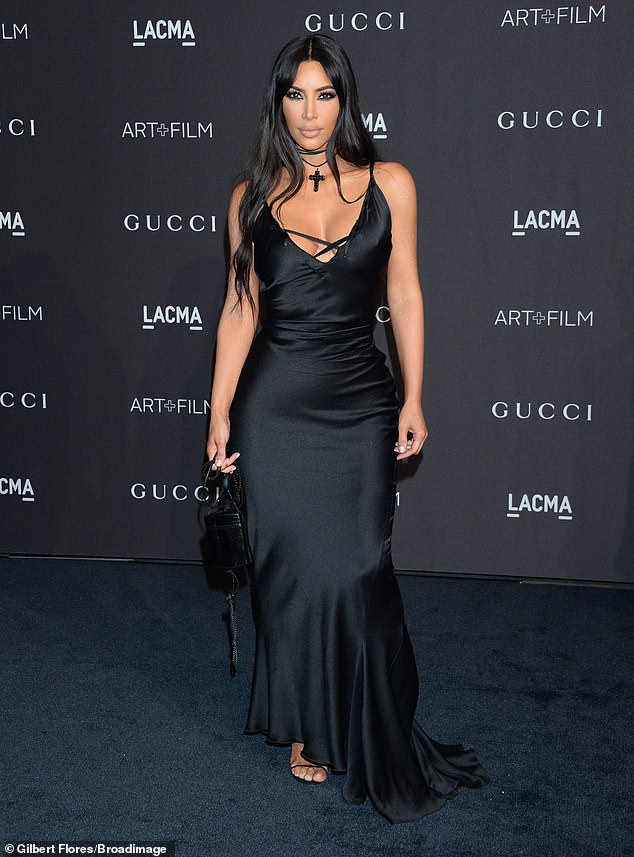 On-the-go: The 38-year-old socialite – pictured earlier this month in LA – was returning from a business trip when she spotted the fires from the air

Dubbed the ‘Hill Fire’ the blaze quickly spread to cover between 8,000 and 10,000 acres on this morning, according to Ventura County Fire Department officials.

The Hill fire, which began at around 2pm, was being spread by powerful winds that pushed it through canyons and to the edge of Camarillo Springs and Cal State Channel Islands, both of which were evacuated.

Nearly 500 miles away in northern California, the town of Paradise was left ‘pretty much destroyed’ by a raging wildfires.

Kim had been returning from a visit to one of the most notorious prisons – San Quentin State Prison in Northern California – according to a Thursday report from TMZ.

According to the publication’s sources, she was on prison grounds for several hours as she met with inmates and staff.

Death row inmate Kevin Cooper is currently in San Quentin though it remains unclear if they met during the visit according to the publication.

Cooper been on death row for 33 years and will face the lethal injection for the murders of four people, including two ten-year-old children.

The KUWTK star today urged California Governor Jerry Brown to allow the retesting of the prisoner’s DNA on Twitter.

In a tweet, the mother-of-two said: ‘Governor Brown, please add Kevin Cooper to your legacy of smart, fair and thoughtful criminal justice reforms.’

She retweeted an opinion article from the New York Times titled ‘Justice Delayed, With a Life on the Line’.

The piece argues that Cooper might have been framed for the heinous crime.

Kardashian took to Twitter weeks ago, just months after she helped 63-year-old Alice Johnson be commuted from her life sentence after 20 years behind bars 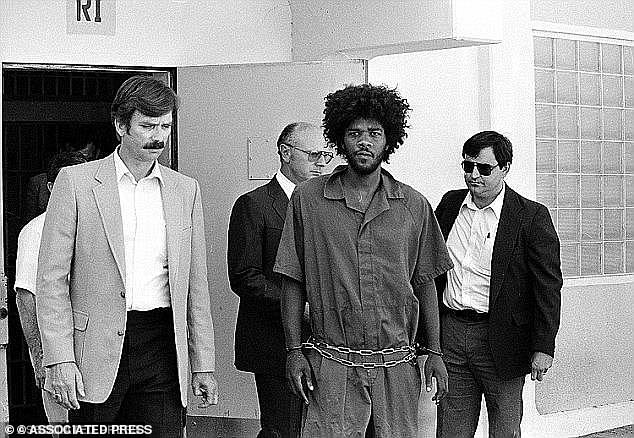 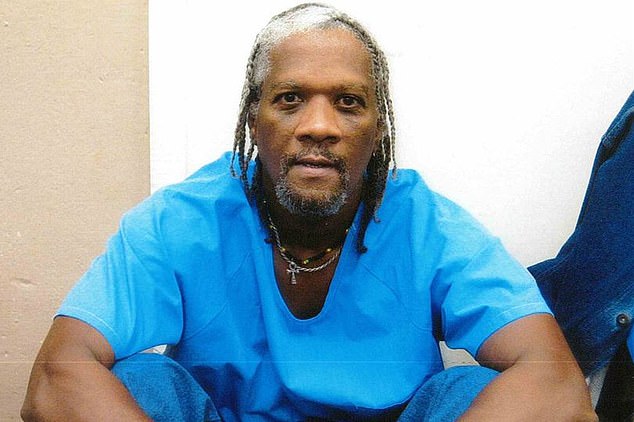 Cooper and his legal team believe he was wrongly convicted and evidence was planted to incriminate him. In 2014, he was just three hours from facing the death penalty before Governor Arnold Schwarzenegger urged a review of his case