While she may not be a singer, actor, or comedian – Kim Kardashian certainly isn’t the first celebrity that has been a surprising pick as a Saturday Night Live host.

Here, DailyMail.com takes a look at some of the most bizarre choices of SNL guest stars, and which of them bombed live of the night…

Former President Donald Trump first hosted SNL in 2004, but it was his 2015 appearance that really caused a stir. The show’s decision to let a Republican Presidential nominee host was met with huge criticism and actual protests against the show.  Did it pay off? Cast member Colin Jost later confessed that the episode was ‘pretty bad’ while Killam, who played Trump before Alec Baldwin, called it ’embarrassing and shameful.’ Killiam said: ‘It was rough. It was not enjoyable at the time and something that only grows more embarrassing and shameful as time goes on.’

Trump pictured on his first go at hosting in 2004

Saturday Night Live is often credited as launching Adele’s career in the States, as she happened to perform on one of the most highest-rated episodes, on September 13, 2008, when Sarah Palin hosted. However, the singer really shocked fans when she decided to host the show last October, despite not having anything to promote at the time (stars usually appear as part of a promotion trail.) The risky move paid off, as the Someone Like You singer went down a storm with hit skits such as her take on The Bachelor. However, she did receive criticism for the Africa sex tourism sketch, where she, Heidi Gardner and Kate McKinnon played divorcees lusting after African men. 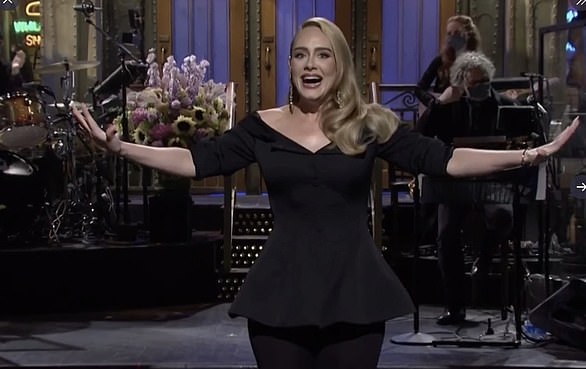 The announcement of Elon Musk as host immediately caused outrage both from fans and members of the cast. Many threw shade, including popular star Aidy Bryant who subsequently posted a tweet from U.S. Senator Bernie Sanders that criticized ‘the 50 wealthiest people in America today.’ Bryant was not featured in Musk’s episode. While the end result was a mixed bag of reactions from viewers, the Tesla billionaire received praise from openly talking about suffering from Asperger’s syndrome, while his then-girlfriend, the musician Grimes, also leant her support by appearing on the show with him. 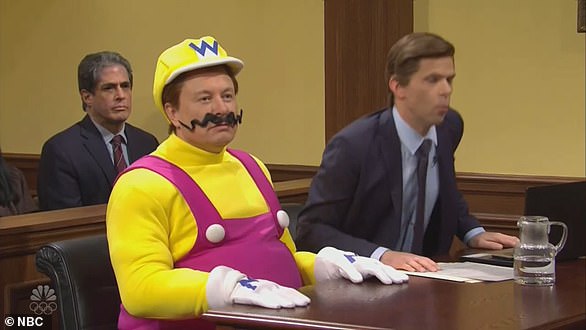 Wrong choice? Some SNL stars were less than happy with Musk as host

A both surprising and brave choice for the comedy gig – sadly Paris Hilton stab at SNL glory did not work out well. She appeared on February 2, 2005, riding high off The Simple Life and played an adulterous Barbie Doll and also Melania Trump. While her skits failed to make much of an impact, it was her behind-the-scenes behavior that was called into question. Then SNL star Tina Fey called her a ‘piece of s**t’ to Howard Stern in 2006. Mean Girls star and writer Fey called the Hilton heiress ‘awful’ and and said that she was ‘unbelievable dumb and so proud of how dumb she is.’ 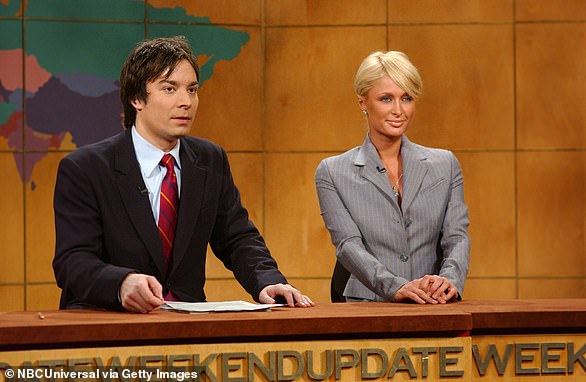 At the time, Ronda Rousey was a up and coming UFC star on the verge of breaking through into the mainstream when she hosted in 2016. However, the WWE champ hosted the show just a mere two months after her brutal fight against Holly Holm, and perhaps that coupled with a huge snowstorm around NYC affected her performance as reviews were dismal. IndieWire said Rousey ‘wasn’t that effective’ and that Tina Fey had ‘stolen’ the show from her. ‘Bringing in an athlete as host is always a risky move,’ the review said, but also said Rousey ‘didn’t do anything wrong’ and nailed some comic timing. 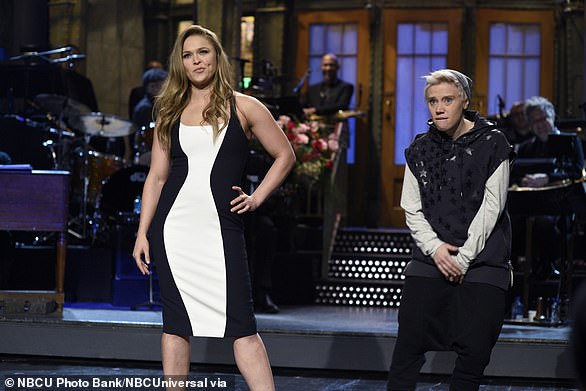 Pictured: (l-r) Ronda Rousey and Kate McKinnon as Justin Bieber during the monologue on January 23, 2016

Then-President Ronald Reagan’s son Ron Reagan was considered a surprising choice in 1986, and raised many eyebrows at the time. He opened the show ripping off Tom Cruise in Risky Business as he paraded through the White House in his underwear. Randy Quaid played his father while Terry Sweeney went in full drag as Nancy Reagan. Reports said at the time that Reagan, a former ballet dancer, was allowed to approve everything in the skits beforehand. All in all, the shock hosting gig was not a disaster, and is fondly remembered for a Back to the Future skit. 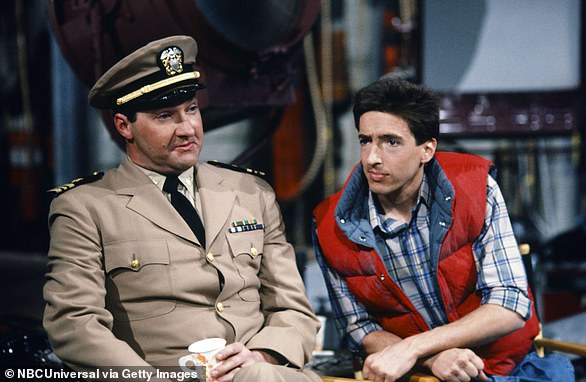 Pictured: (l-r) Randy Quaid as President Ronald Reagan, Ron Reagan during their Back To The Future skit on February 8, 1986

Olympic figure skater Nancy Kerrigan hosted SNL just a mere few months after she was infamously attacked by Tonya Harding’s boyfriend. Certainly an odd choice, TIME Magazine said Kerrigan ‘put in a supremely awkward performance.’ However, while Kerrigan may have missed the comedic mark – it was a ratings hit, also thanks to a legendary musical Aretha Franklin. Chris Farley and David Spade where also praised for their hilarious commentary of Olympic ice skating during the episode. 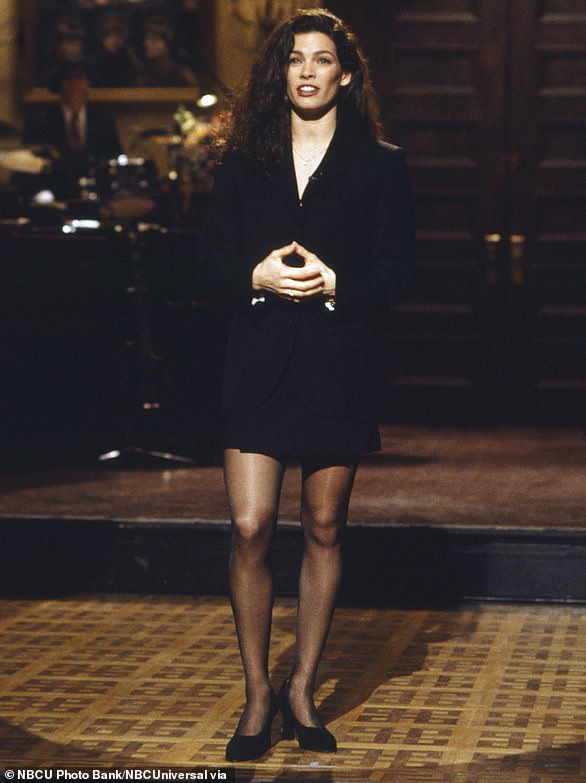 Many will now recognize the name Catherine Oxenberg as being part of the hit HBO documentary The Vow about NXIVM leader Keith Raniere. But back in the 80s, Oxenberg was a hit on Dynasty playing Amanda Carrington and worthy of the SNL hosting gig. She impressed viewers by comparing her mother on the show Alexis Carrington (Joan Collins) to her famous mother in real-life, Princess Elizabeth of Yugoslavia. Musical guests for the episode included Paul Simon and LadySmith Black Mambazo. 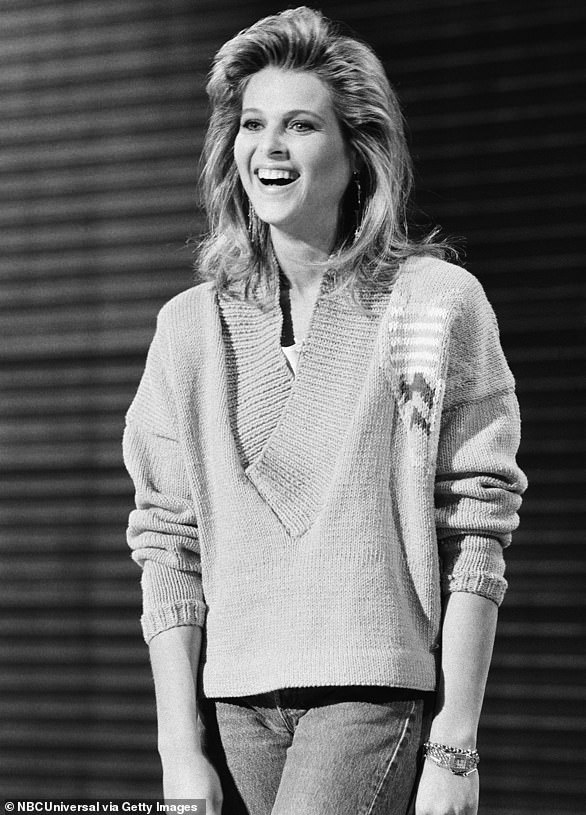 Pictured: Catherine Oxenberg during the Monologue on May 10, 1986