Kim Kardashian is mocked for White House meeting with Trump

They’re both former American reality TV stars – and the irony of their meeting at the White House hadn’t escaped internet users on Wednesday.

Kim Kardashian was widely mocked for achieving a chat with President Donald Trump when he has been poring all his efforts into a serious political meeting with the leader ofNorth Korea, Kim Jong-Un.

The 37-year-old’s invitation to discuss prison reform with Trump was dubbed a ‘dystopian reality’ when social media users woke up to a picture of the Kardashian standing in the Oval Office on Thursday morning.

The alternative reality: Donald Trump (centre) was mocked for nailing a meeting with Kim Kardashian on Wednesday, when he has spent many months trying to meet with North Korean leader Kim Jong-Un (left), whose face was superimposed onto the official picture in a series of memes on Thursday

‘There’s at least a ten percent chance Donald Trump is meeting with Kim Kardashian because he thinks she’s the leader of North Korea [Kim Jong-Un],’ one user joked.

It was a joke shared by many Twitter users, who passed around a doctored image of the meeting where Kim’s face had been replaced with the Korean leader’s.

One user said: ‘”Kim Kardashian meets Trump to discuss prison reform”‘ is one of those headlines that reminds you we are living in truly dystopian times.’

Joking: Some found humour in the Trump’s delight that he finally had a meeting with Kim… despite it being the wrong one 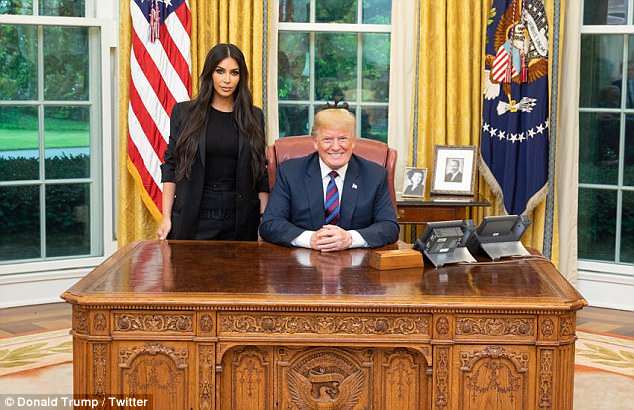 The original: Trump shared this photo with Kim during their meeting in the Oval Office on Wednesday night

Some suggested that the meeting was like an episode of Netflix series Black Mirror, in which dark and twisted alternative realities are explored in the future.

Social media users had Kim pegged for great things and even imagined the release of a new book entitled, ‘Kim Kardashian Saves The World, After President Trump Nearly Ends It’

Though others questionned the suitability of Kim – who stars on E! reality show KUWTK – and Trump – who previously found fame on The Apprentice USA – to decide on prison reform.

One said: ‘Kim Kardashian talking to Trump about prison reform is good because she is smarter than him and we need prison reform.’

A mock-up of Kim’s phone screen was also shared by fans to imagine her searching for the terms that she might need to discuss in the meeting.

Dismay: Many believed they were waking up to a dystopian reality on Thursday morning 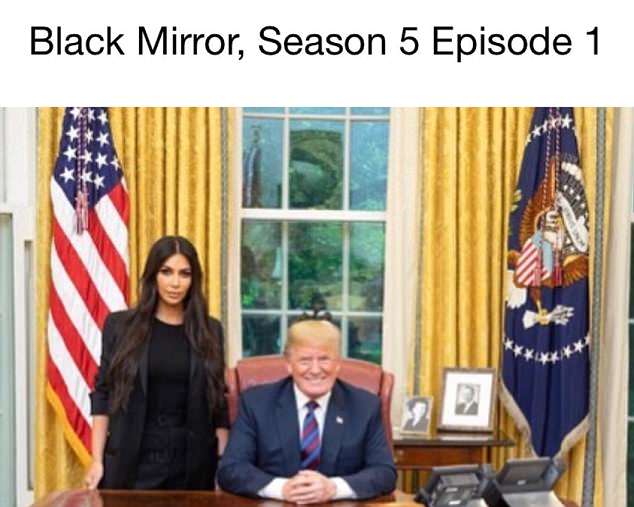 Black Mirror: Some suggested that the meeting was like an episode of Netflix series Black Mirror, in which dark and twisted alternative realities are explored in the future

Humorously, many recalled a scene from Keeping Up With The Kardashians in which selfie-obsessed Kim is told to stop taking photos of herself while they drove her sister Khloe to prison in October 2007.

Khloe was being sentenced for violating her probation on a DUI offence, and Kim was clearly not taking the arrest seriously.

‘Kim, would you stop taking pictures of yourself? Your sisters is going to jail,’ Kim was sternly told by mum Kris Jenner.

There was also the suggestion that Kim is trying to get back at frenemies Beyonce and Jay-Z by showing allegiance to Trump. 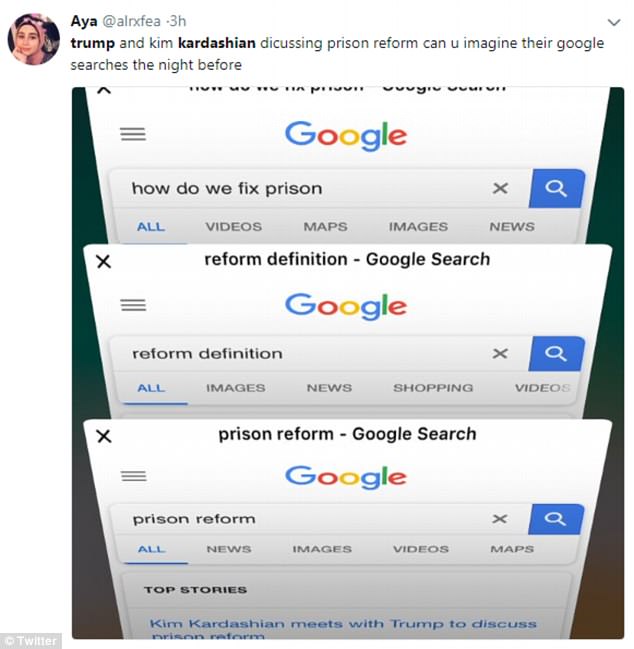 Making a joke: There was also a mock-up of Kim’s phone screen that showed her ‘Googling’ the terms they might discuss in the meeting

‘Honestly, I feel like Kanye and Kim Kardashian are riding Donald Trumps wave so hard only because The Obama’s loved Beyonce and Jay so much and they were at EVERY event. Kim and Ye want to be Jay and Bey so bad! It’s obvious.’

Kim’s husband Kanye West famously fell out with former mentor Jay-Z when he failed to attend his wedding to Kim in 2014.

Jay-Z and Beyonce were strong supports of President Obama and campaigned tirelessly for Trump’s rival Hilary Clinton to get into office in 2016.

Kim’s husband Kanye previously met with Trump at Trump Tower in December 2016, though neither explained what the meeting was about. 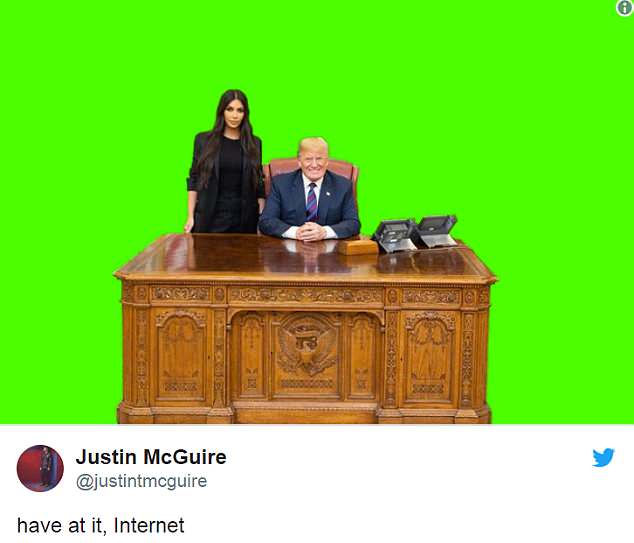 Let the memes begin: Placed in front of a green screen, the duo were left open to a world of comment by one user 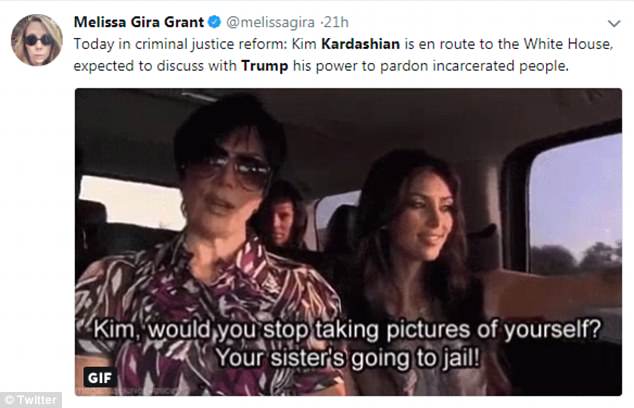 Humorous: Some drew on a funny memory from the reality show Keeping Up With The Kardashians, when Kim refused to stop taking selfies while they drove Khloe Kardashian to be reprimanded for a DUI 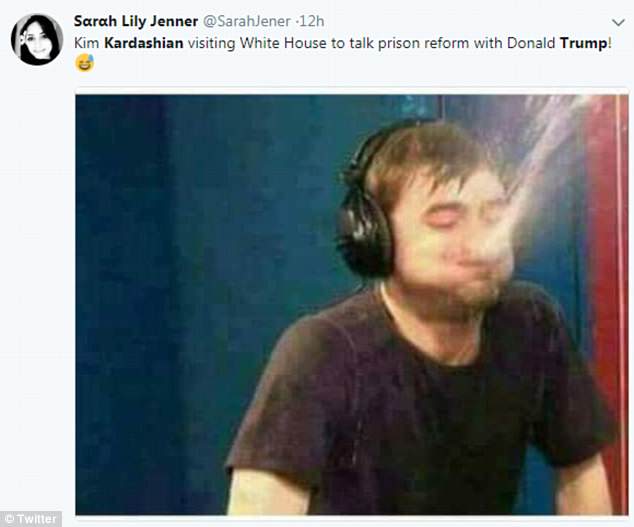 What? Some viewers were in disbelief, choosing to share their reactions in visual form, like this picture of Daniel Radcliffe spitting out his water while he laughed

On Wednesday, Kim spent an hour at the White House in a meeting with the president’s son-in-law Jared Kushner that also included a conversation with Trump about a first-time drug offender and great-grandmother Alice Johnson who is serving a life sentence in prison.

Johnson was imprisoned for life in 1996 for drug dealing and money laundering after her 15 accomplices all testified against her and had their own charges dropped – despite Johnson’s minor role in the cocaine ring. It was her first offence.

After the meeting, Kardashian left the White House and headed for Jared Kushner and Ivanka Trump’s DC home.

She later tweeted: ‘I would like to thank President Trump for his time this afternoon. It is our hope that the President will grant clemency to Ms. Alice Marie Johnson who is serving a life sentence for a first-time, non-violent drug offense.

‘We are optimistic about Ms. Johnson’s future and hopeful that she —and so many like her—will get a second chance at life.’ 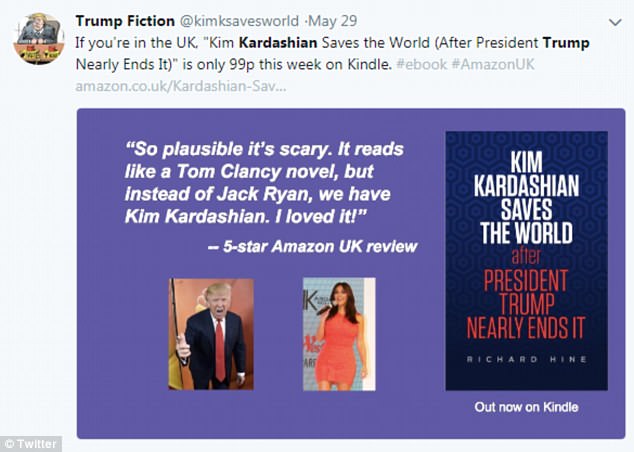 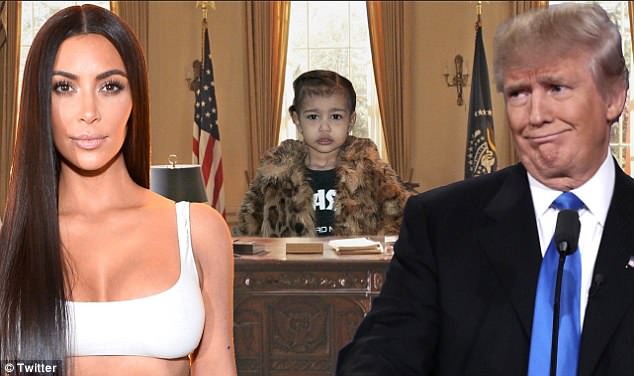 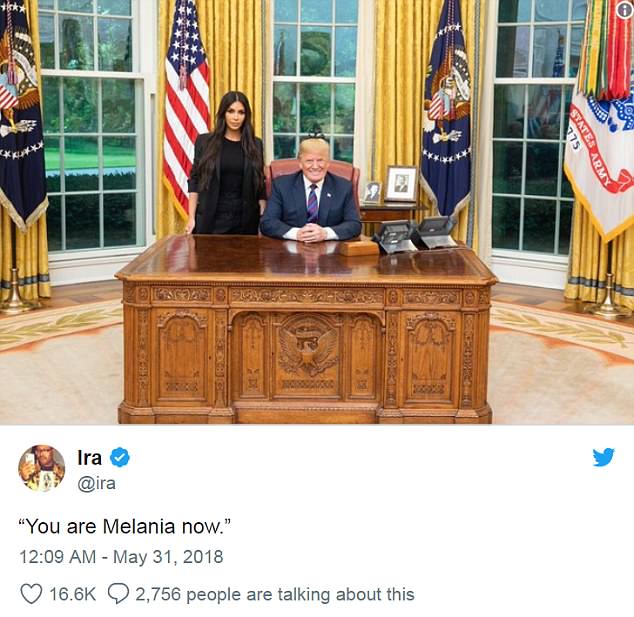 Working her way in: Kim has previously spoken about how she would like to be more forthcoming with her political views

Kim has not always been so welcoming of Donald, making it clear in 2017 that she was not supporting his presidency.

In an interview with Harper’s Bazaar Arabia, Kim hinted that her daughter North West, who was four at the time, would serve as a better US president.

‘Anyone can run the US better,’ she said in August 2017. ‘My daughter would be better.’

At the time, the reality-TV queen admitted she was working on her courage to be more forward in her political views.

‘Sometimes I feel like I want to speak out more about political issues,’ the mother of three added.

‘You have to be really careful about what you say, because a lot of things can be taken in the wrong context and I always want to be respectful; I don’t want to hurt anyone’s feelings.’ 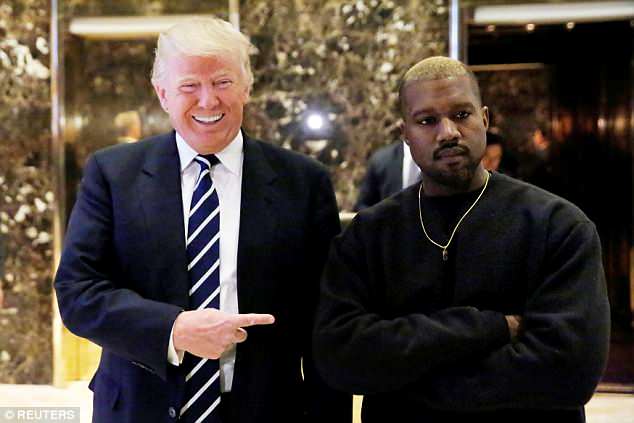 Meeting of minds: Kim’s husband Kanye West met with Trump in December 2016 (pictured). The details of their meeting were never disclosed 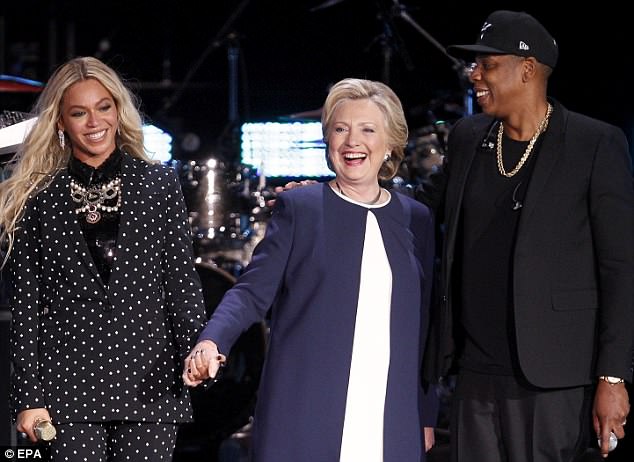 Supporters: Some suggested that Kim’s meeting was a direct dig at Beyonce and Jay-Z who were firm Hillary Clinton supporters 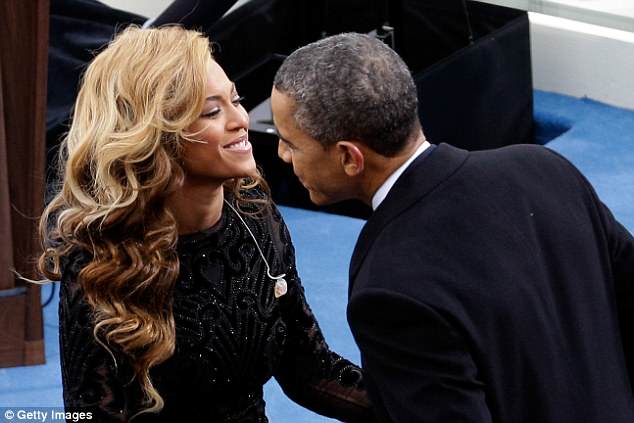 Allegiance: Beyonce and Jay-Z are also good friends of former President, Barack Obama. Kanye fell out with Jay-Z in 2014.