Kim Kardashian enjoyed a night out at Nobu in West Hollywood on Saturday evening where she showed off her famous curves.

The 41-year-old billionaire reality star was was pictured dining with a circle of A-listers including Demi Moore, her daughter Rumer Willis, Fendi’s Kim Jones and model Amber Valletta.

The dinner outing marks the first time Kim has been spotted since she confirmed her romantic relationship with SNL funnyman Pete Davidson in hand-holding snaps obtained exclusively by DailyMail.com

Dining in style: Kim Kardashian was spotted out for the first time since she seemed to confirm her romance with SNL’s Pete Davidson as she dined at Nobu in West Hollywood on Saturday evening with A-list pals

The stunning media mogul kept her raven locks straight down and shielded her eyes behind Balenciaga sunglasses with statement earrings.

Pictured in her dinner party was Demi, 59, who wore jeans and a camel coat with matching boots, while her eldest daughter Rumer, 33, wore all white with a stylish beige overcoat.

Valletta, a famed model, was seen trailing behind them in a stylish black pant suit. 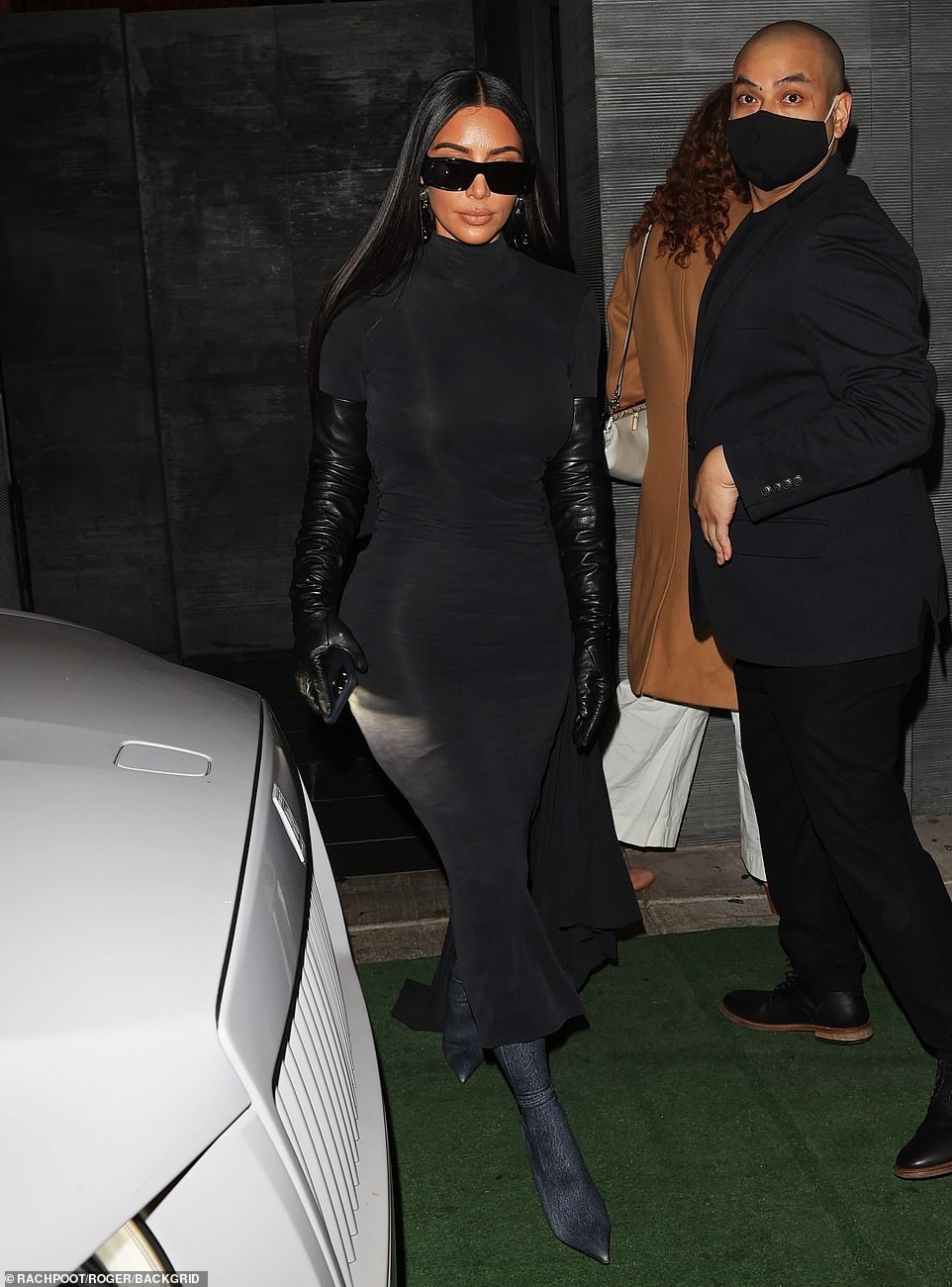 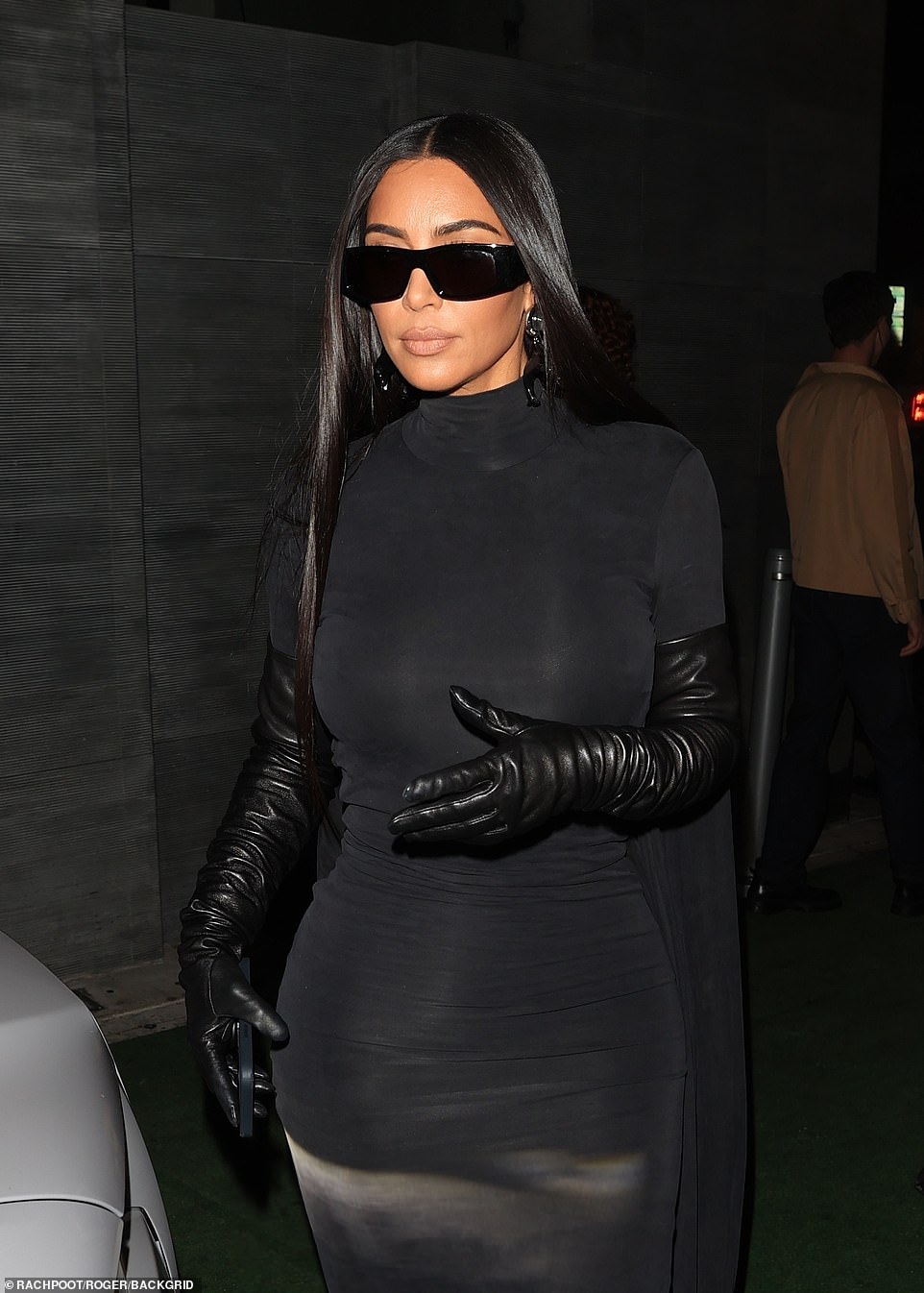 Flying solo: She dined with pals while her rumored comedian beau was back in NYC for Saturday Night Live

The group all exited the celebrity haunt together before Kim was seen peeling off with her security detail and heading to her white Rolls Royce.

Though the nature of the group dinner was unclear, Fendi’s Kim Jones — who Kim collaborated with on Fendi X SKIMS — is a common thread between the Kim and Demi.

All three had been in attendance together at WSJ. Magazine’s Innovators gala on November 1 in New York City, where Kardashian was presented with an award for her billion dollar brand.

The day after her evening of honor, Kim’s relationship with SNL’s Pete Davidson seemed to kick into high gear where they were reported to enjoy back to back dates including one in his native Staten Island. 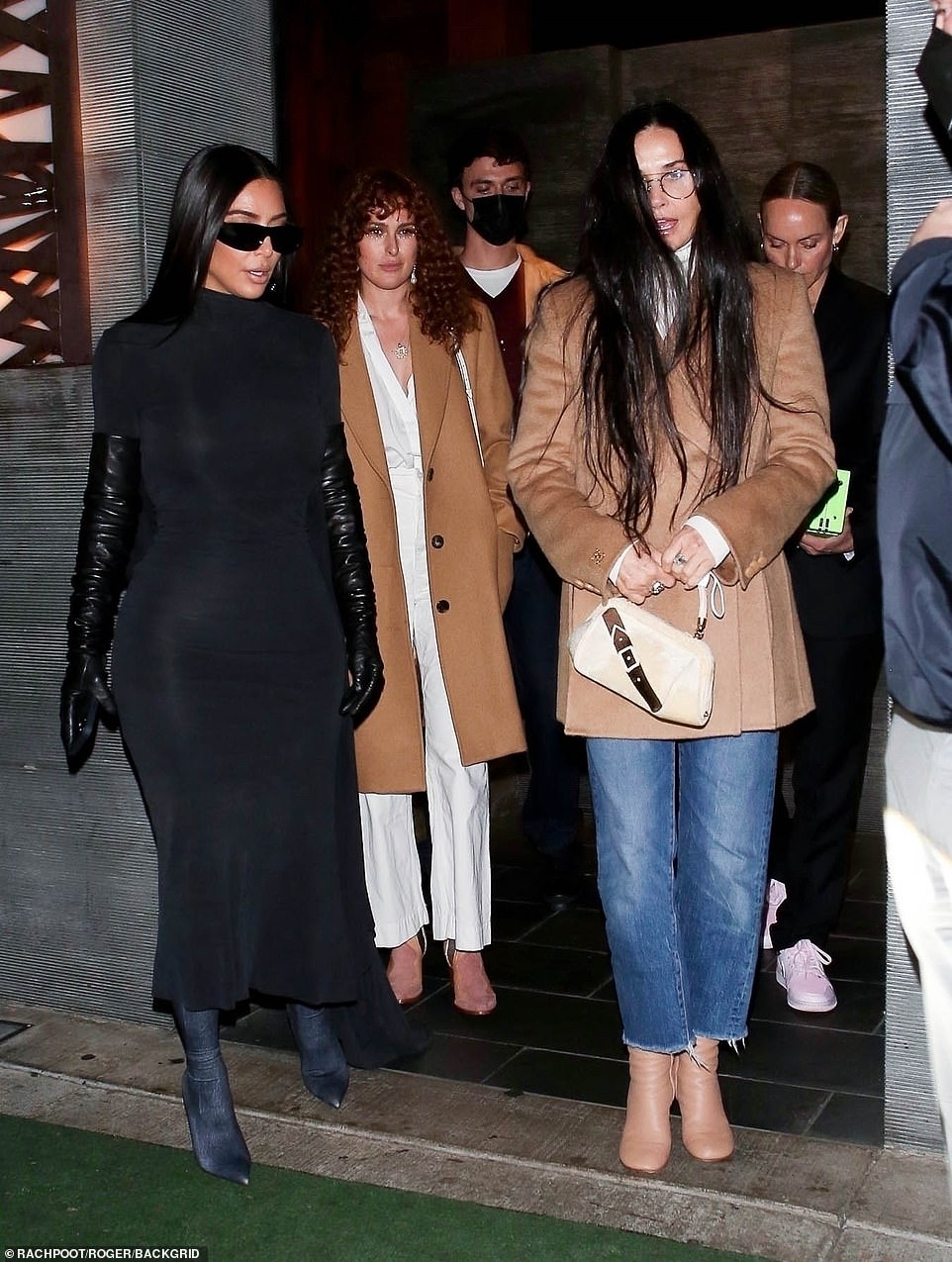 Family affair: Pictured in her dinner party was Demi, 59, who wore jeans and a camel coat with matching boots, while her eldest daughter Rumer, 33, wore all white with a stylish beige overcoat 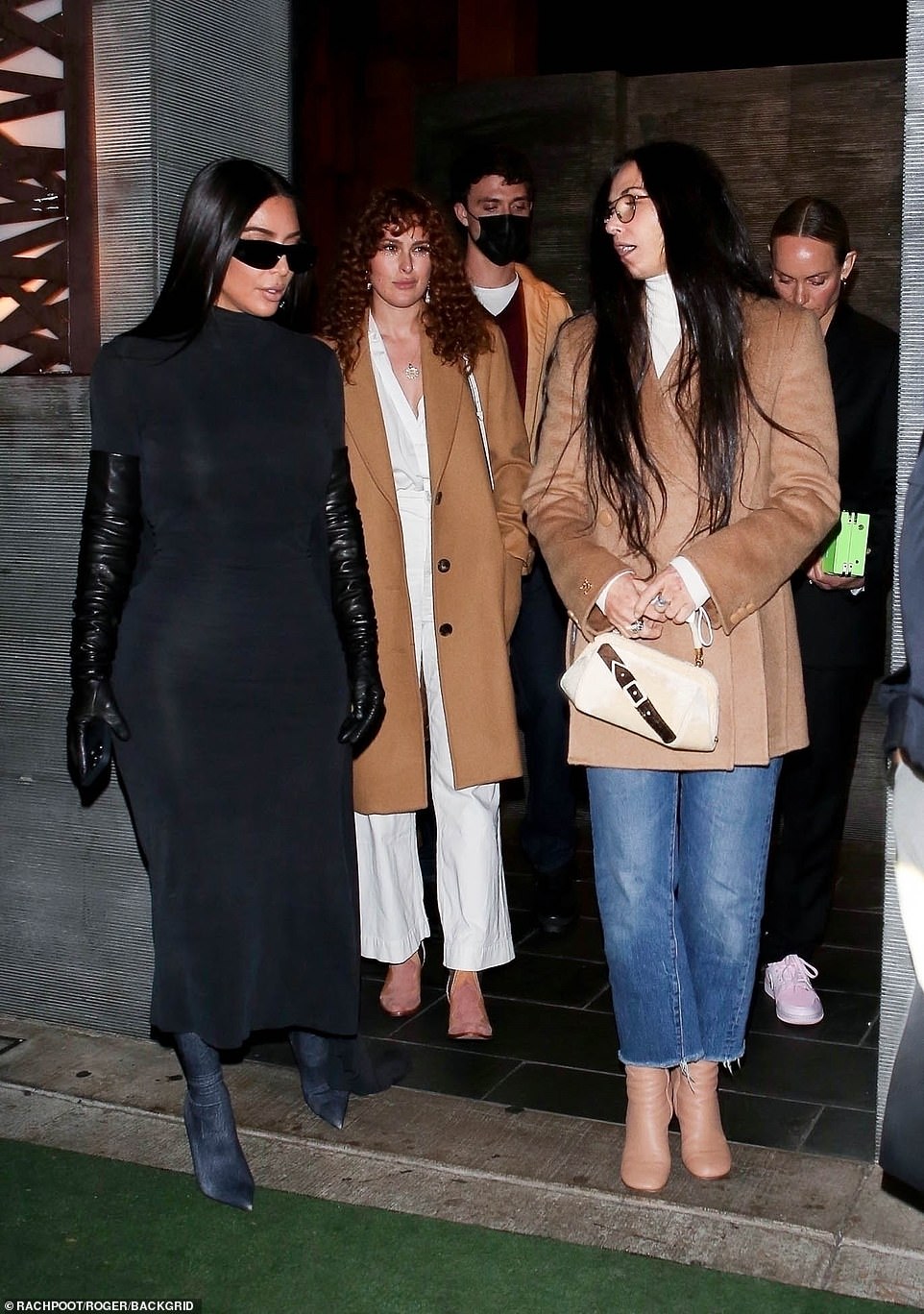 Reunion: Demi and Kim had last spent time together in November as they attended WSJ. Magazine’s Innovators gala where Kim was presented with an award 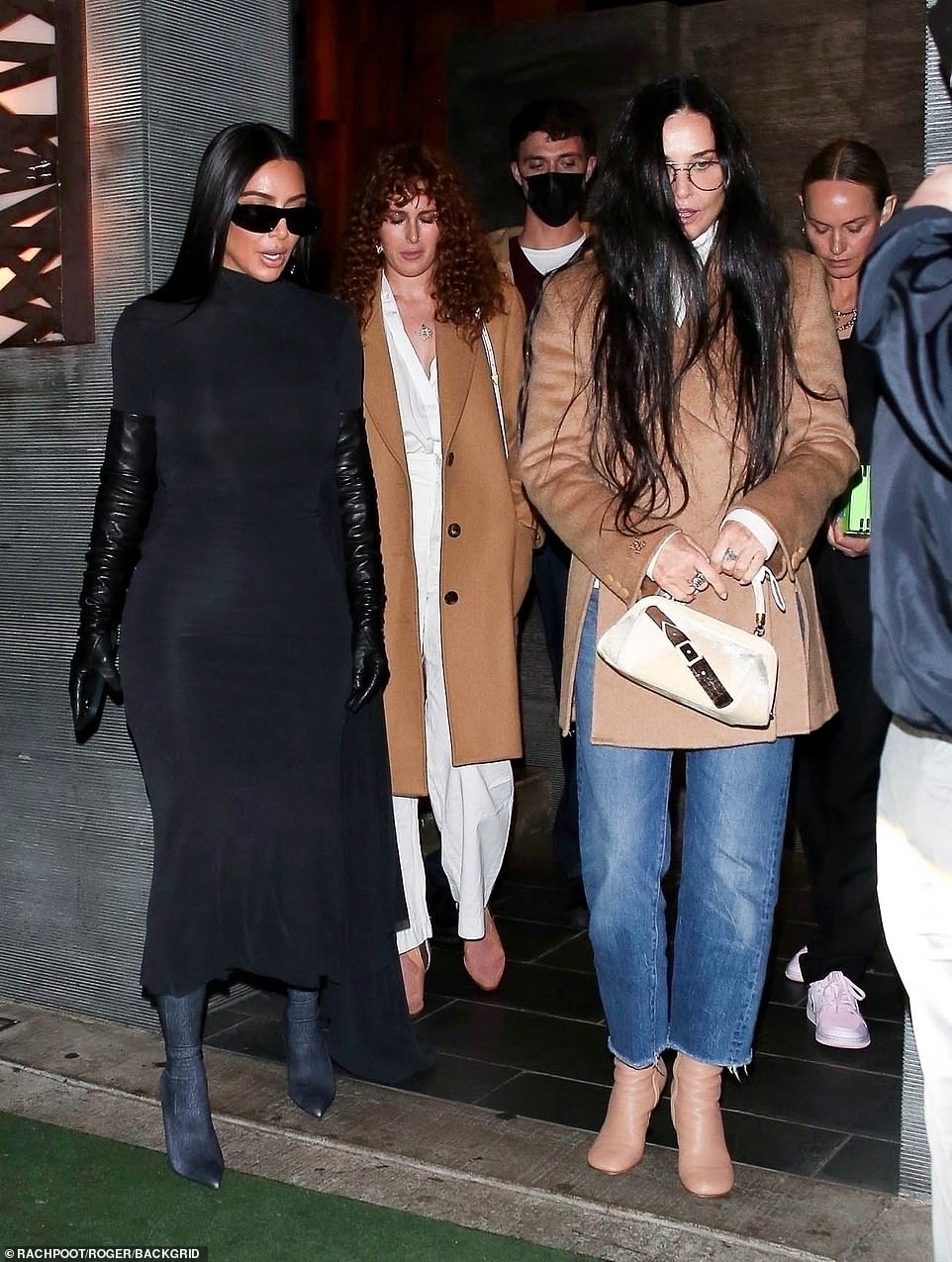 Chatting it up: The A-list ladies appeared deep in conversation as they exited the celebrity haunt 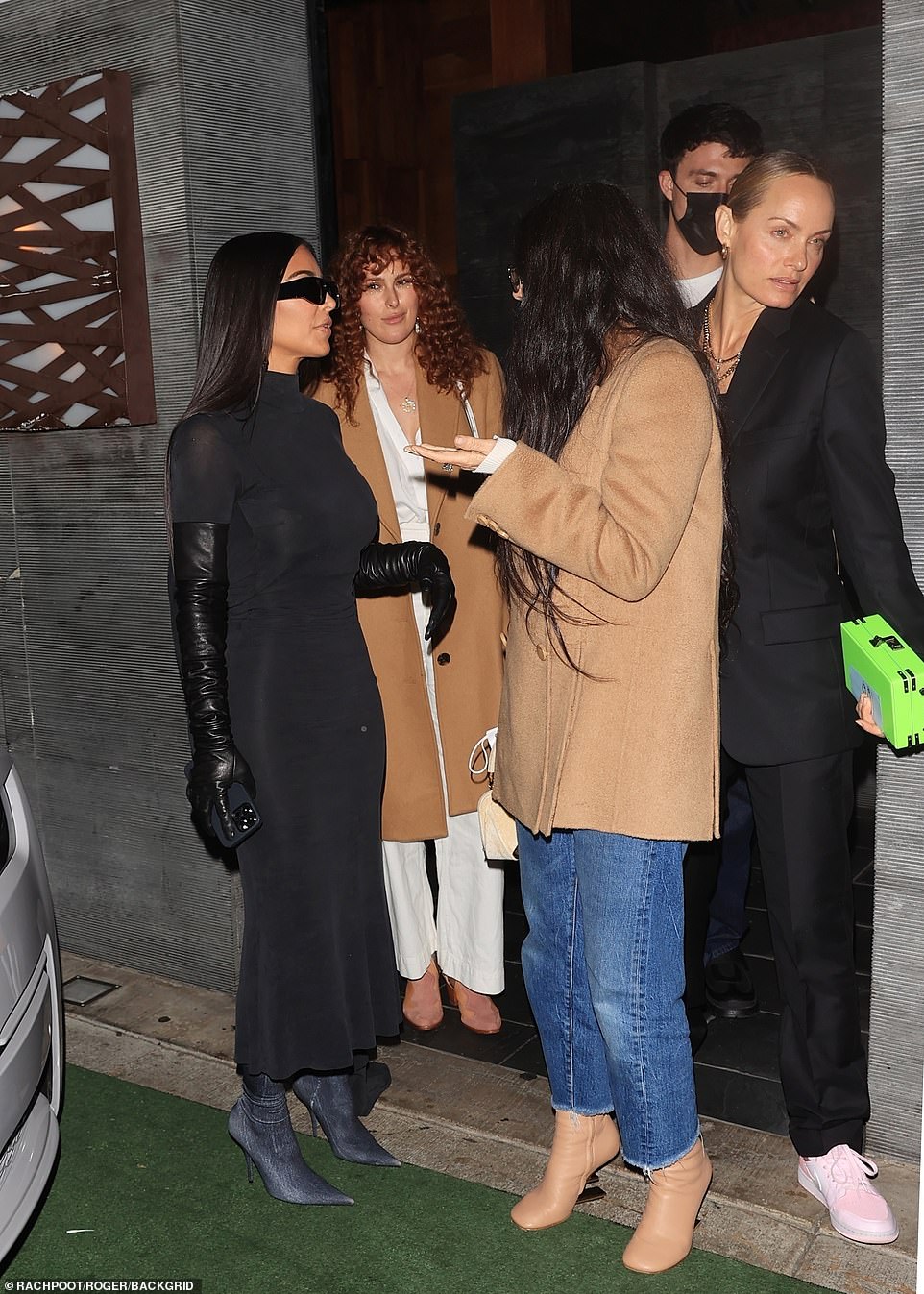 Parting words: The group all seemed to peel off to their respective vehicles as Amber was pictured getting a head start in a black suit

The King Of Staten Island star, 28, reportedly romanced her at his go-to Italian spot Campania’s in his native borough where he ‘arranged a dinner on the rooftop privately’ for ‘just the two of them.’

Kim was photographed heading to a waiting SUV ahead of the hangout and DailyMail.com obtained photos of a hefty bouquet of red roses arriving to the Ritz Carlton before she left.

Security was not present during their ‘romantic date’ and they were said to have left through the back door of the establishment, with sources saying it was apparent they had ‘chemistry’ and that she remained ‘intrigued’ by Pete. 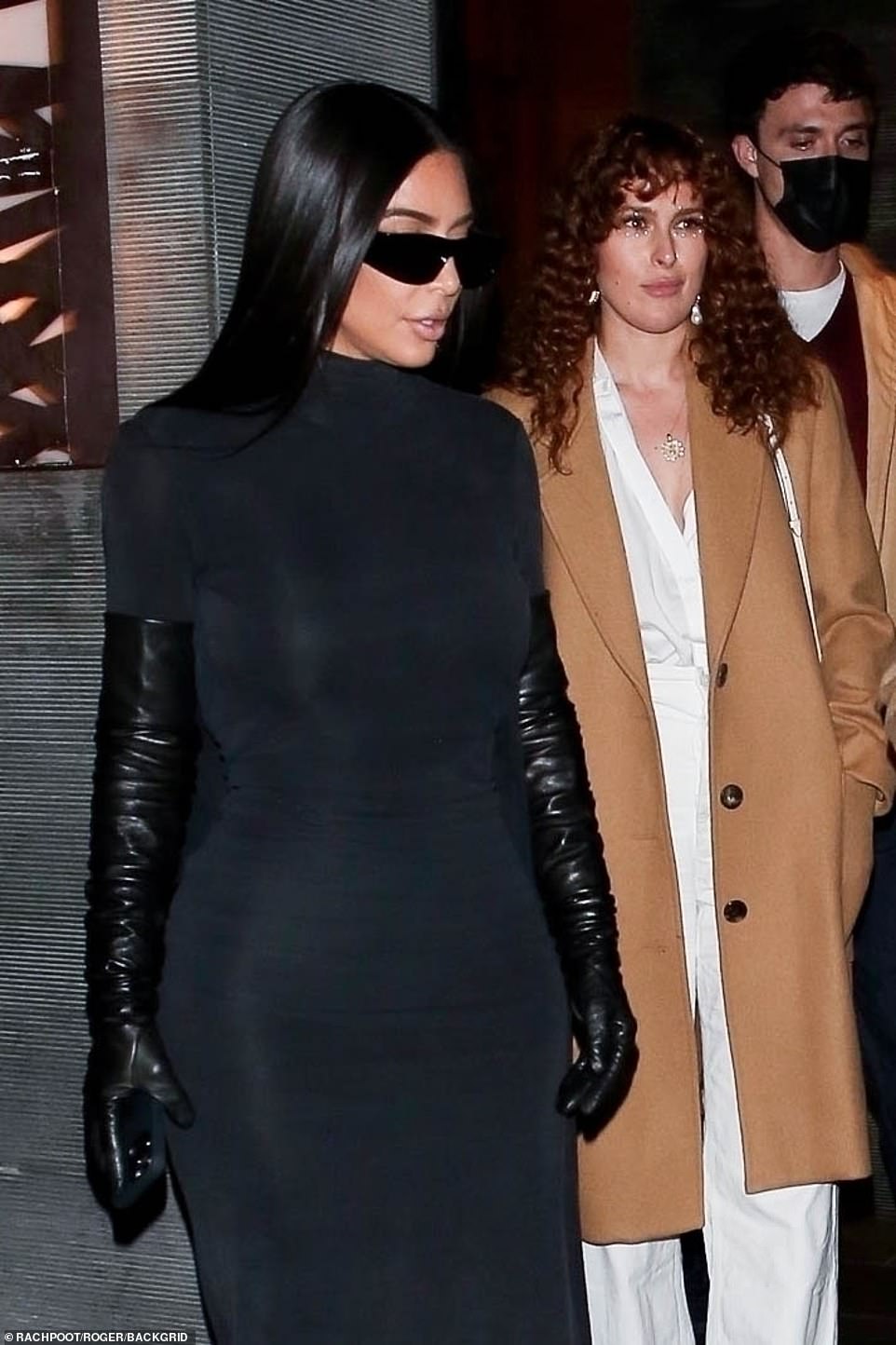 Romantic bliss? Sources had recently said that she is ‘falling for’ Pete and the relationship seemed to ramp up following his birthday on November 16

Chatting it up: While Demi and Kim seemed to get some last minute chat in Rumer was seen peering behind them 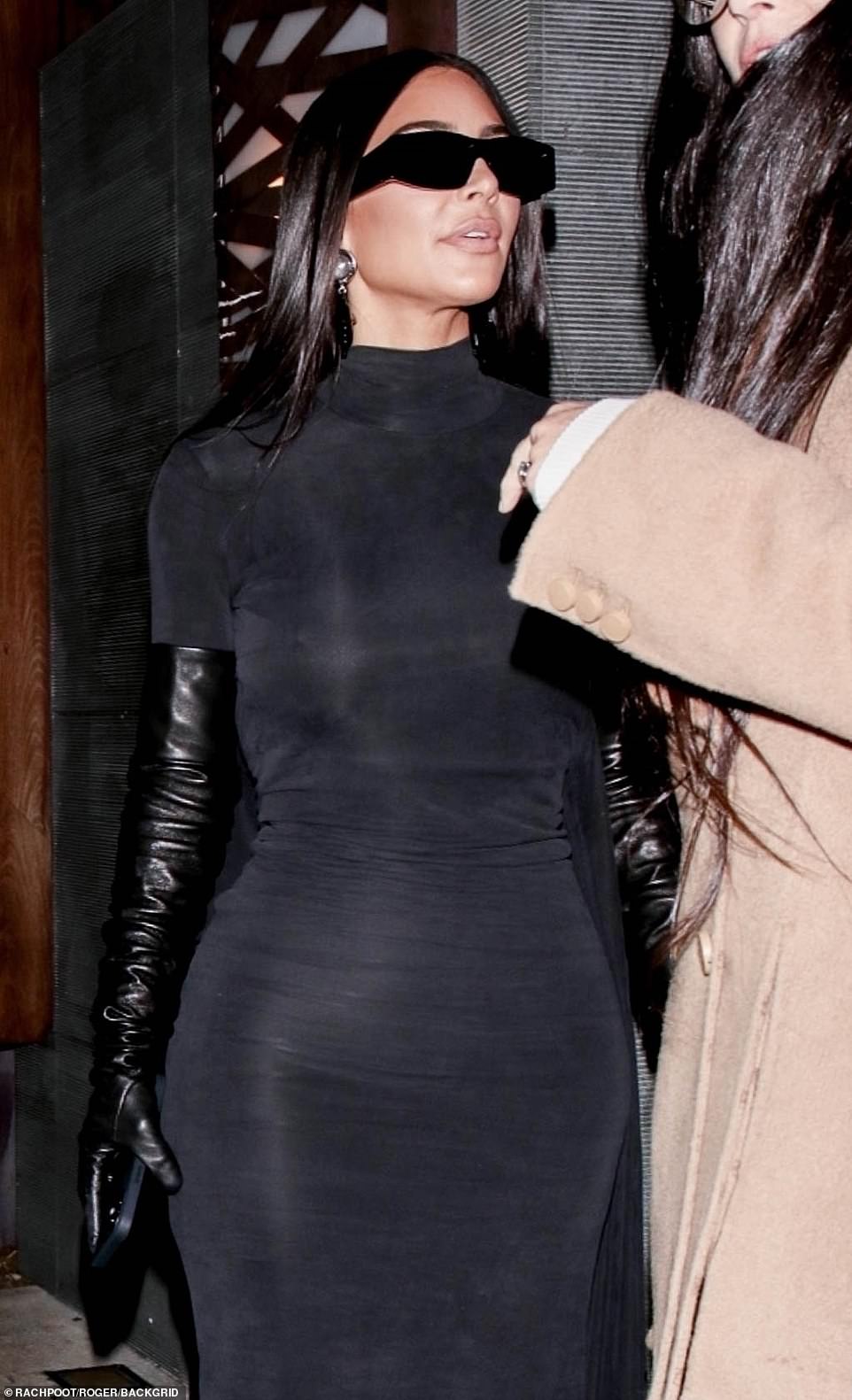 And the duo kept the fun going on November 3 when they dined with a group for Kardashian BFF Simon Huck’s birthday at the exclusive members club Zero Bond.

‘They were smiling and laughing a lot and seemed genuinely affectionate with each other…But there was no Kravis-style PDA,’ an insider had told Page Six.

A source close to Kim exclusively told DailyMail.com that Davidson is ‘very aggressive’ with her as he often ‘grabs her waist, compliments her butt and touches her hair’ when they are together.

‘He is extremely sexual and in her face. He is making it crystal clear he likes her,’ the confidant said. ‘He definitely is not being aloof or playing coy, he is just going for it. And she seems to be loving the attention. It’s nice to see her happy.’ 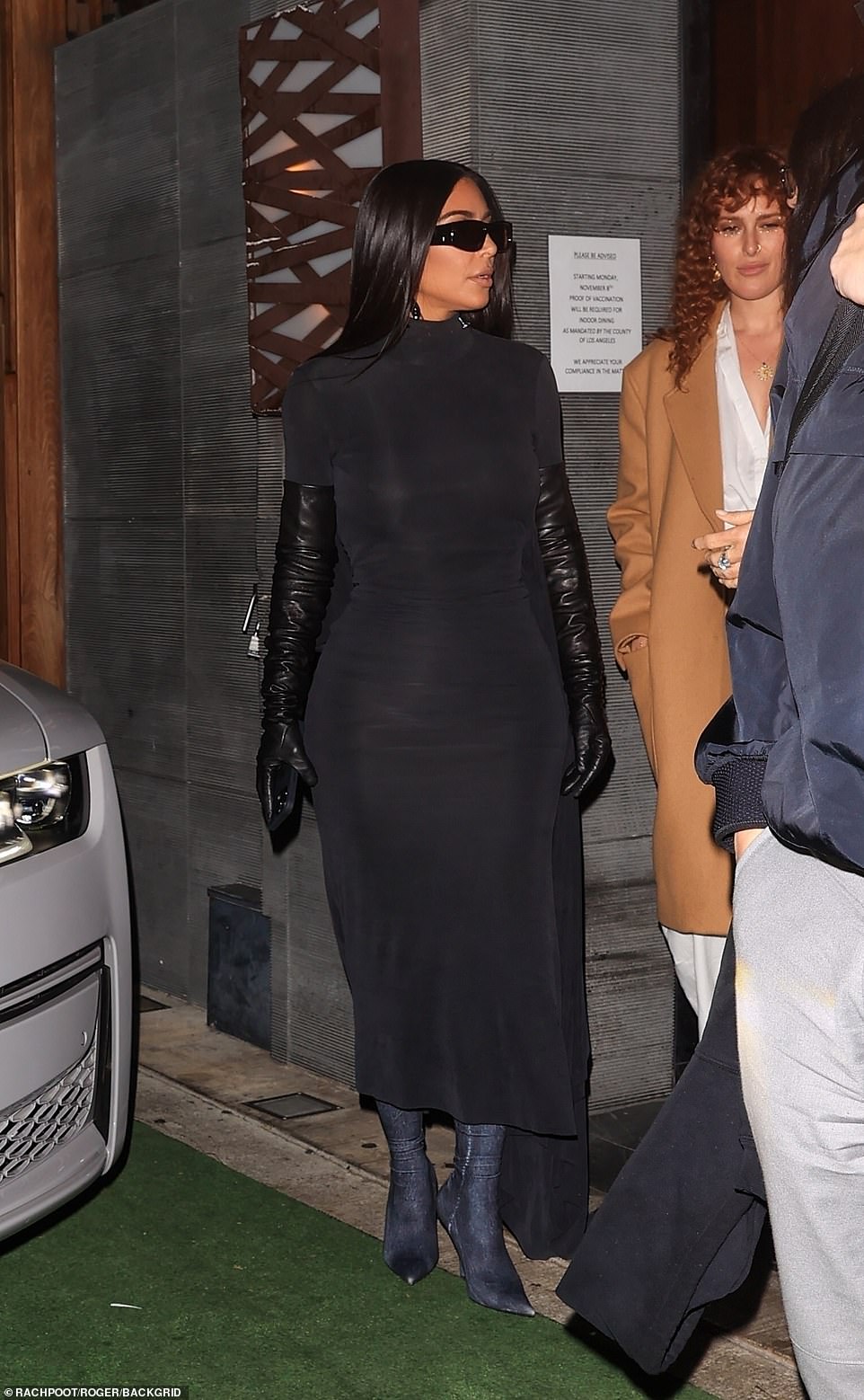 Sex appeal: A source close to Kim exclusively told DailyMail.com that Davidson is ‘very aggressive’ with her as he often ‘grabs her waist, compliments her butt and touches her hair’ when they are together 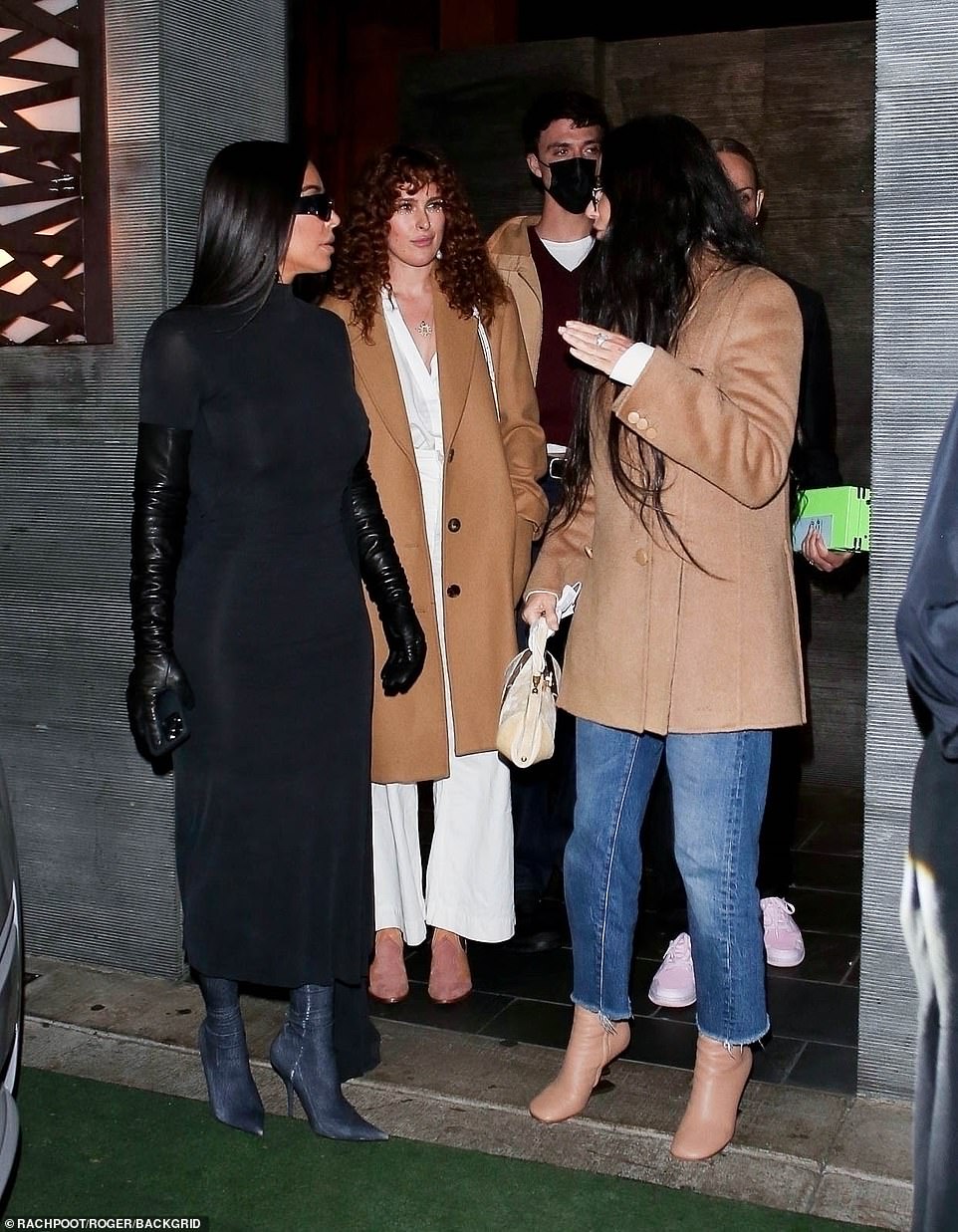 Advice? As Demi famously enjoyed a long lasting marriage to Ashton Kutcher who was 16 years her junior, perhaps Kim was getting a bit of advice 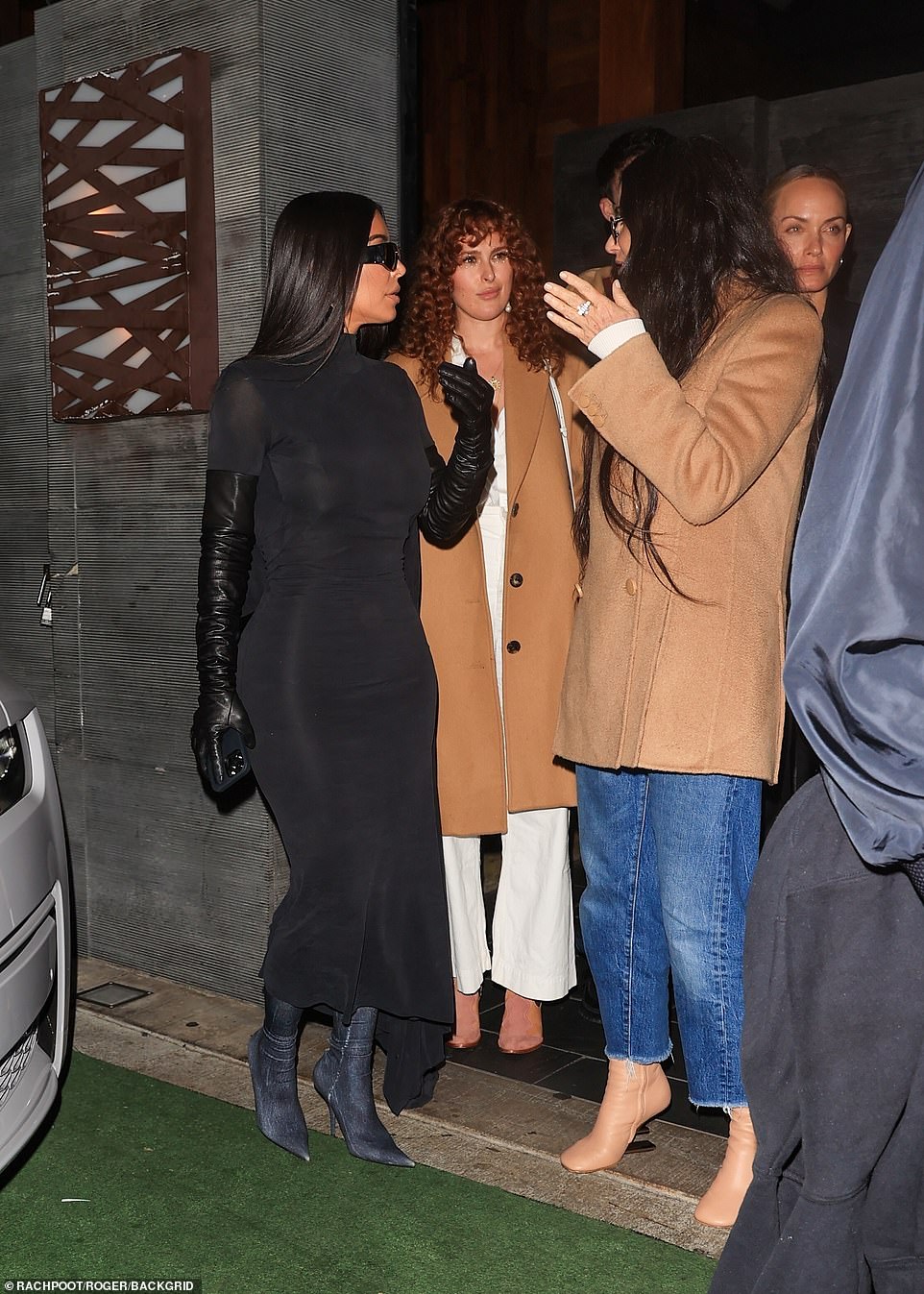 Mother-daughter outing: Demi only seemed to bring her eldest daughter for the evening with the KUWTK mega star

Famously the pair had first shared a kiss during an Aladdin skit on SNL as Kim made her hosting debut in early October and a source told Us Weekly that he made the first move and that ‘Kim could tell right away what the big fuss is about Pete.’.

‘He was a true professional the whole time they rehearsed and in between takes but afterward things got flirty. They exchanged numbers and Pete asked if Kim would like to hang out sometime, which she agreed to straight away.’

Their first hangout came in the form of a Knott’s Scary Farms date where they were pictured holding hands on a ride, but it was said that as others including Steph Shepard and Kourtney Kardashian with Travis Barker were present it was a ‘friend’ thing.