Kim Kardashian enjoyed an outing with her son Saint, six, in Los Angeles this Saturday after a scare earlier that day.

An intruder nearly made it into Kim’s Hidden Hills mansion Saturday morning before he was apprehended by security.

Yet she appeared calm and unruffled that day while taking a stroll with Saint, who is one of the four children she shares with her ex-husband Kanye West.

On the go: Kim Kardashian enjoyed an outing with her son Saint, six, in Los Angeles this Saturday after a scare earlier that day 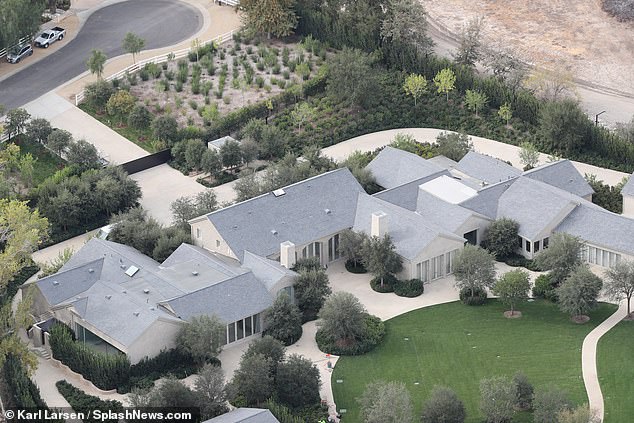 Alarming: An intruder nearly made it into Kim’s Hidden Hills mansion Saturday morning before he was apprehended by security

As Kim was spotted out and about with her eldest son, news broke about the man who was just barely prevented from entering her home.

He mysteriously managed to get through the entrance of her gated community and onto her estate, where the guards halted him mere steps from Kim’s door.

Security were able to subdue the man after a tussle and he was arrested that morning around 11am, sources informed TMZ.

It is not currently known whether Kim or her children – North, nine, Saint, six, Chicago, four, and Psalm, three – were on the property at the time.

In her stride: Yet she appeared calm and unruffled that day while taking a stroll with Saint, who is one of the four children she shares with her ex-husband Kanye West

After being removed from the scene in handcuffs, the intruder – whom insiders say was besotted with Kim – was charged with trespassing and battery.

Apparently sheriff’s deputies in the area were already aware of this particular man, whom they previously spotted in surveillance footage.

Kim and Kanye bought the Malibu compound in December 2014 just months after their Florence wedding, and according to People paid $20 million.

She filed for divorce last February after months of rumors their marriage was on the rocks, and in October 2021 news broke that she was keeping the house.

The spread has been decorated in an eerily antiseptic style Kim once described as ‘minimal monastery’ while doing Vogue’s 73 Questions.

Her personal bathroom is so massive she threw a spa party in it this summer to celebrate her gal pal Olivia Pierson’s birthday.

Kim and her children’s father are currently on the outs as he faces down his latest storm of controversy, which began when he debuted his ‘White Lives Matter’ t-shirts during his show at Paris Fashion Week last month.

He was then suspended from Instagram after posting screen-grabs of a text argument with Sean ‘Diddy’ Combs about the t-shirts in which he, Kanye, declared he would ‘use you as an example to show the Jewish people who told you to call me that no one can threaten or influence me.’

In short order he was thrown off Twitter after he bizarrely wrote on the social media platform that he would ‘go death con 3 ON JEWISH PEOPLE.’

The rapper claimed that he ‘can’t be Anti Semitic because black people are actually Jew also’ and ranted that ‘You guys have toyed with me and tried to black ball anyone whoever opposes your agenda.’

Amid the mounting furor, Kim and Kanye have both attended their children’s sporting events but appeared to avoid any contact with one another.

Kim’s latest brush with the danger of fame comes months after a bombshell interview with one of the perpetrators of her infamous 2016 Paris robbery.

Yunis Abbas is one of 12 elderly men arrested for the burglary, in which Kim was bound and gagged at gunpoint.

The band of thieves now known as the ‘grandpa robbers’ plundered $10 million worth of jewelry from her luxurious hotel suite.

‘Since she was throwing money away, I was there to collect it, and that was that,’ Abbas told VICE News, adding with a chuckle: ‘Guilty? No, I don’t care.’

He also divulged details of the robbery itself, alleging that Kim’s ‘secretary’ attempted to call help – but dialed 911 despite being in France.

When asked about celebrities posting about their valuables online, Abbas argued: ‘They should be a little less showy towards people who can’t afford it.’

When asked about celebrities posting about their valuables on the internet, Abbas defiantly argued: ‘They should be a little less showy towards people who can’t afford it. For some people, it’s provocative.’

Kim reportedly experienced flashbacks after the robbery, during which she feared she might be raped or murdered.

She told David Letterman the experience left her so ‘paranoid’ for a year that she would have ‘half a dozen’ guards constantly posted at her home.

Last year, five years after the robbery, she revealed she was still so scarred by the incident that she no longer keeps any jewelry at home even in a safe.

She insisted ‘no expensive items ever come’ to her home and ‘As far as jewelry, if I’m wearing something, it’s borrowed’ or ‘It’s fake.’