Kim Kardashian naked on a table in latest Instagram photo

Taking to Instagram on Thursday morning, the mother-of-three shared a photo of her naked self, writhing on a table.

But if Kim was hoping to switch the attention back to herself with her nudity, she hadn’t told Kanye West.

Less than an hour after Kim posted her arresting shot, Kanye was back on Twitter – sharing a private message from close friend John Legend gently chastising him for supporting President Trump.

John began the text message by urging the Famous hitmaker to ‘reconsider aligning yourself with Trump.’ Kanye replied accusing the singer of ‘manipulating my free thought’ before sharing the personal exchange to Twitter 15 minutes later.

It’s not known what Kim thinks of the tweet – although she is unlikely to be impressed, considering her close friendship with Legend and wife Chrissy Teigen.

Kim’s early morning Instagram shot was the latest in a series of nude images to promote her new perfume, KKW Body.

A draped white tablecloth covers the wheeled table, which stands in front of a white sheet. 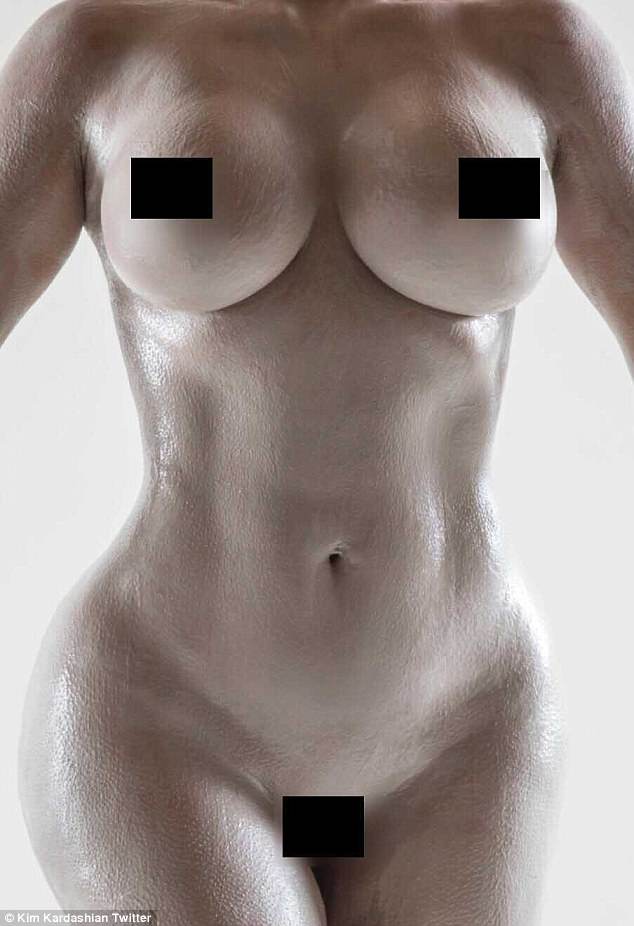 Hourglass: She shared numerous naked snaps of herself on Tuesday as she teased the arrival of her new perfume 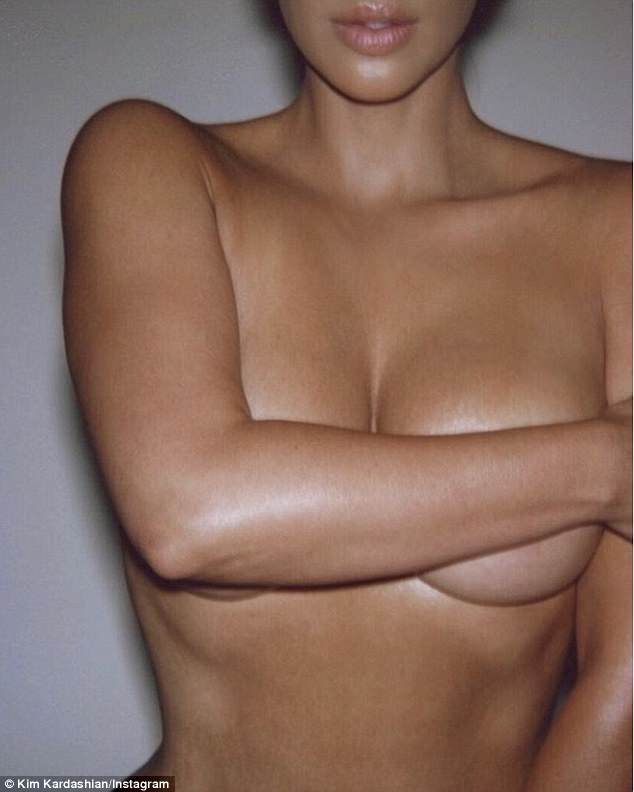 Flashing the flesh: Kim protected her modesty with her arm in this first snap showing her topless

An arm casually thrown over her breasts, Kim’s legs are carefully arranged to preserve her modesty.

On the floor are scattered Polaroid images of a naked Kim, some of which she has previously shared to Instagram.

The 37-year-old had a mold taken of her naked body to create the bottle for her new perfume.

Finally: Kim Kardashian finally released images of her new KKW Body fragrance bottle that was modeled after her own shapely figure via Snapchat on Wednesday

Kim is following up the success of her KKW Beauty and KKW Fragrance brands, which she launched in 2017, with her latest scent.

The shoot and bottle mold were overseen by artist Vanessa Beecroft, who has worked with Kanye on his Yeezy brand in the past.

After choosing the name, Kim decided that the perfect shape for the flacon container for the scent would be her own hour-glass figure which has made her a sex symbol across the world.

The Keeping Up With The Kardashians star took to Twitter to unveil a nude photo of herself covered in grey plaster along with the caption: ‘We took a mold of my body and made it a perfume bottle @KKWFRAGRANCE.’

Kim also shared a host of racy promotion images which show her lying on a bed naked. 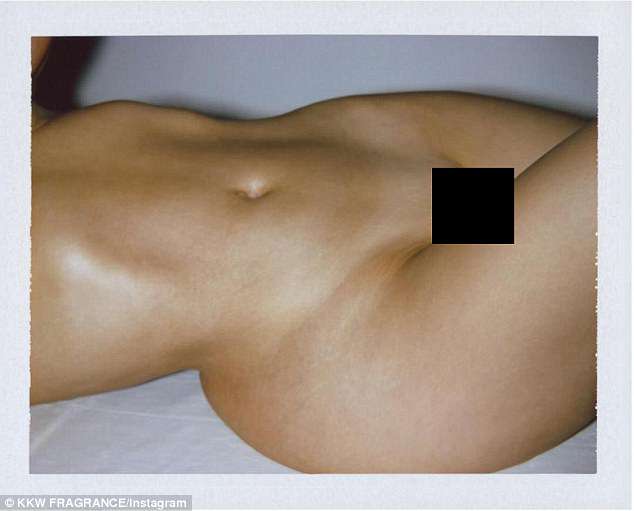 Speaking about why she wanted to use her own famous body for the bottle’s design and the inspiration behind the odour, Kim said: ‘KKW Body is so amazing. It is a sculpture, basically, of my body. It’s really cool. The scent is so good, I’m so proud of it. It smells to me like what I would think golden smells like, even though that’s a colour and something that’s just luminous.’

The release date was set well in advance, but comes as Kanye rejoined Twitter, posting tweets comparing his house to the sunken place in Get Out and comparing himself to ‘Ford Hughes Jobs Disney’.

Most controversially, the Gold Digger rapper started to post messages on Twitter showing his support for President Trump.

He tweeted: ‘You don’t have to agree with Trump but the mob can’t make me not love him. We are both dragon energy. He is my brother. I love everyone.’ 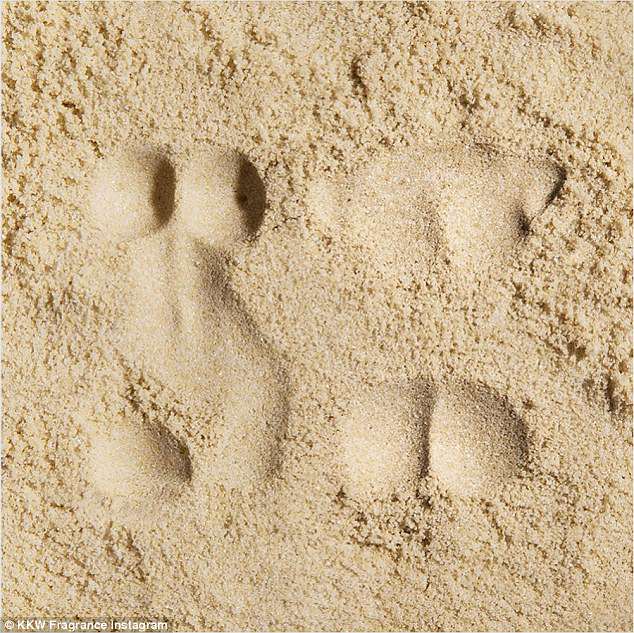 He tweeted out a picture of him wearing the infamous Make America Great Again cap, and another one showing the hat reportedly bearing the signature of Trump.

Such an outburst of controversial opinions and images reportedly did not sit well with his in-laws.

While the original rumour suggesting that Kanye West lost nine million followers following his latest Twitter session has been dismissed by the social media company, it’s the loss of just three particular individuals that has people talking. 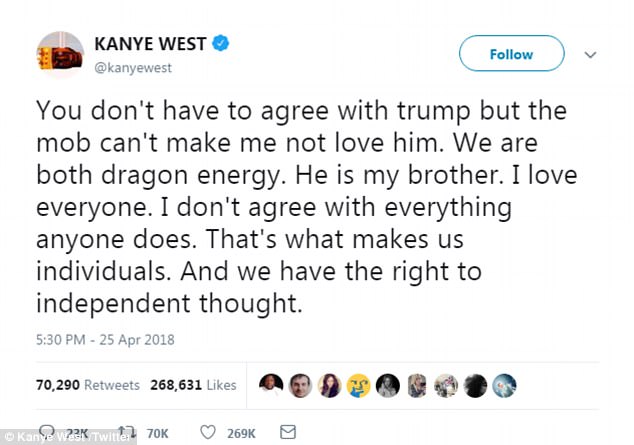 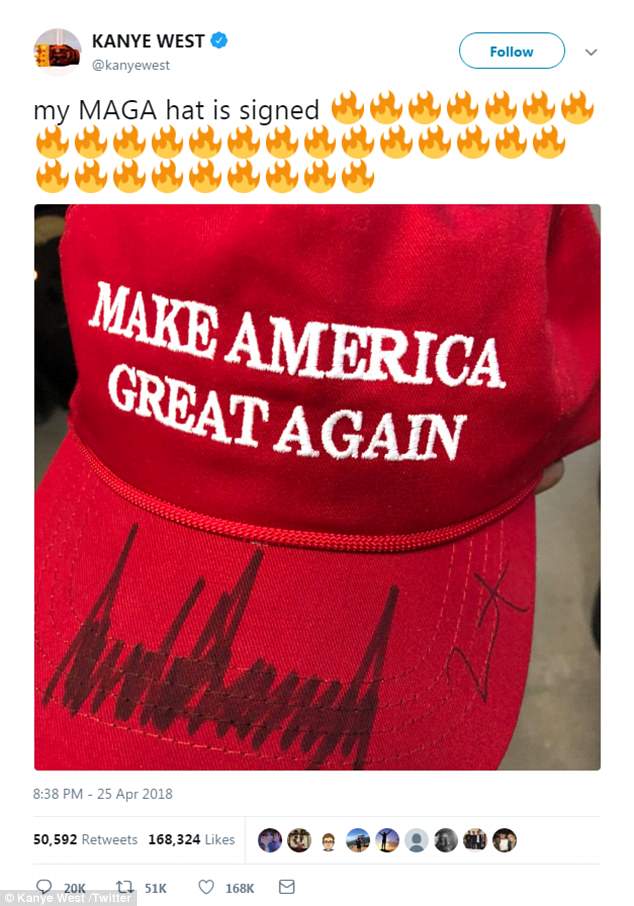 Kanye West posted a series of tweets about Trump, including a picture of a signed MAGA cap