Jonathan Cheban could have brought anyone to Kim Kardashian’s 37th birthday dinner at the Carousel Armenian restaurant in Glendale, California on Thursday.

But the 43-year-old Keeping Up With The Kardashians guest star chose his mother, Galina.

The two were side by side as they headed to the celebration where Kanye West, Kris Jenner, Kourtney Kardashian and Kendall Jenner dined.

Mommy time! Jonathan Cheban could have brought anyone to Kim Kardashian’s 37th birthday dinner at the Carousel Armenian restaurant in Glendale, California on Thursday. But the star chose his mother, Galina 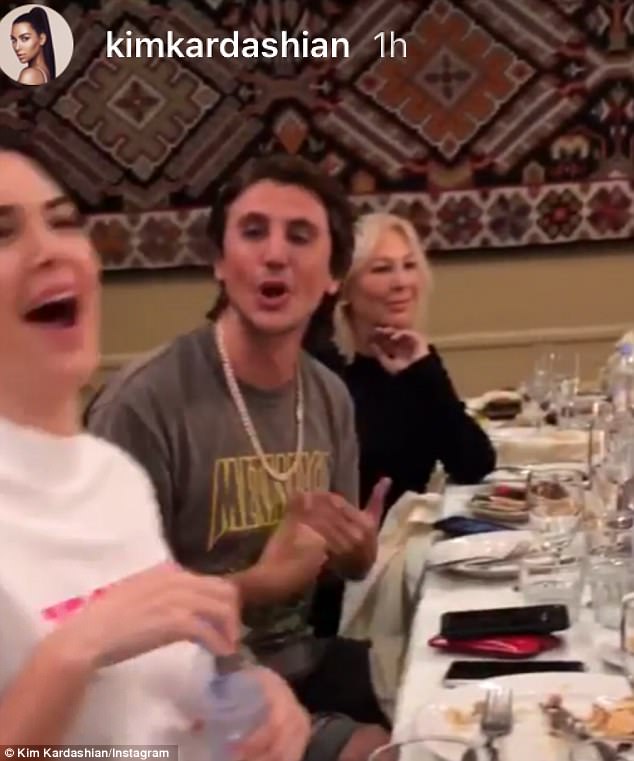 Cheban wore a grey and yellow Metallica shirt with a chain necklace.

His real estate agent mother was stylish in black with some fetching black strappy heels. 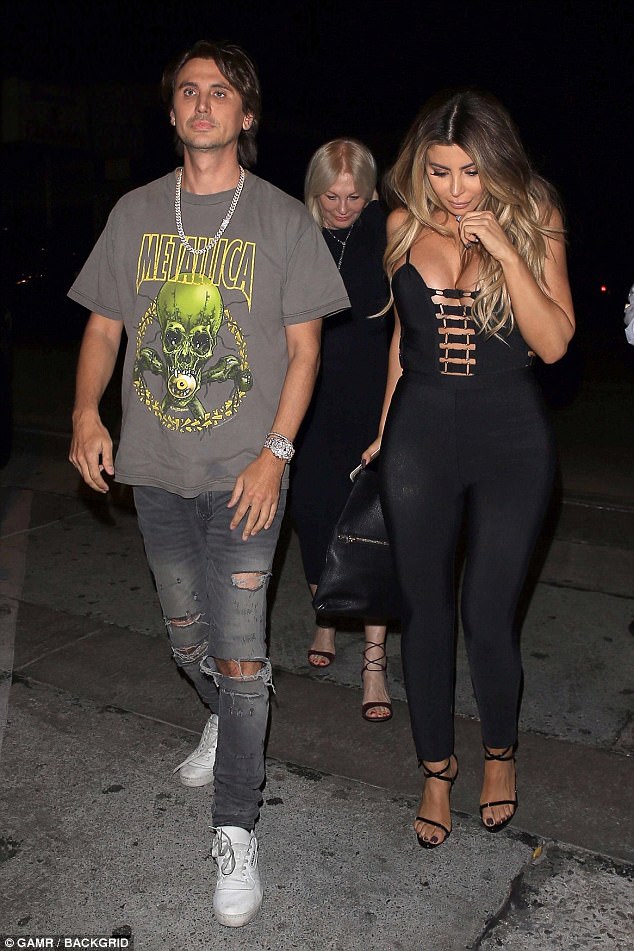 Meanwhile, Kim looked absolutely stunning in a thigh-skimming tight white mini dress which left her bronzed and slender pins firmly on display and teased a hint of cleavage.

She added an edge to her ensemble by throwing a sleek black leather blazer atop he skimpy number and sported a pair of glittering strappy heels on her feet.

The blonde bombshell tied her long platinum locks back into a slick high ponytail to draw attention to her impeccable make-up that came complete with lashings of mascara, contoured cheeks and a nude lipstick across her lips. 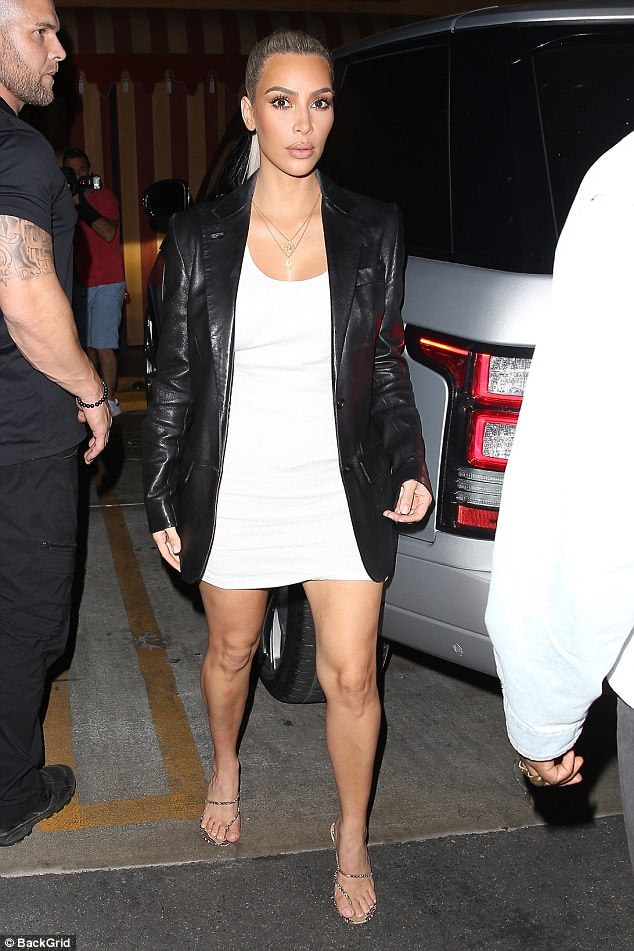 Still celebrating! Kim’s famous family made sure to keep her the center of attention as they joined together for her belated birthday dinner at Carousel Armenian restaurant in Glendale, California on Thursday night 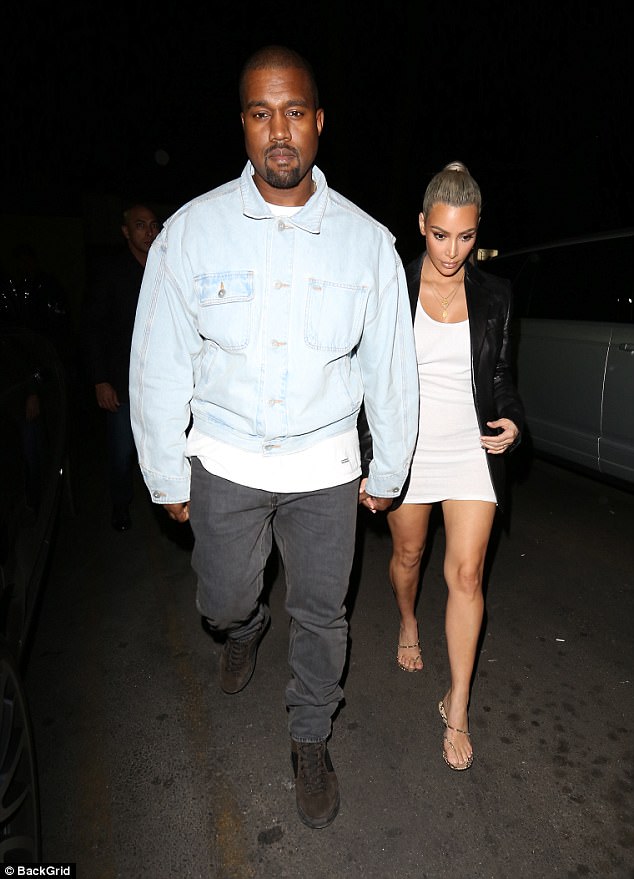 Her rapper beau Kanye, meanwhile, buttoned up in a large light denim jacket with a simple white T-shirt underneath.

He sported a pair of black jeans and boots, as he clutched onto Kim’s hand and joined her family to celebrate his wife’s special day. His appearance with the Kardashians comes after it was claimed Kim has put the star on a ‘daddy diet’ ahead of the arrival of their third child.

The couple are expecting again via a surrogate and are set to welcome their addition early next year. Reports claimed Kim had ordered her beau to embark on a strict diet and training regime in order for him to ‘feel his best’ as they expand their brood.

The couple, who wed back in 2014, are expecting their third child via surrogate in January and are already parents to daughter North, four, and son Saint, one. 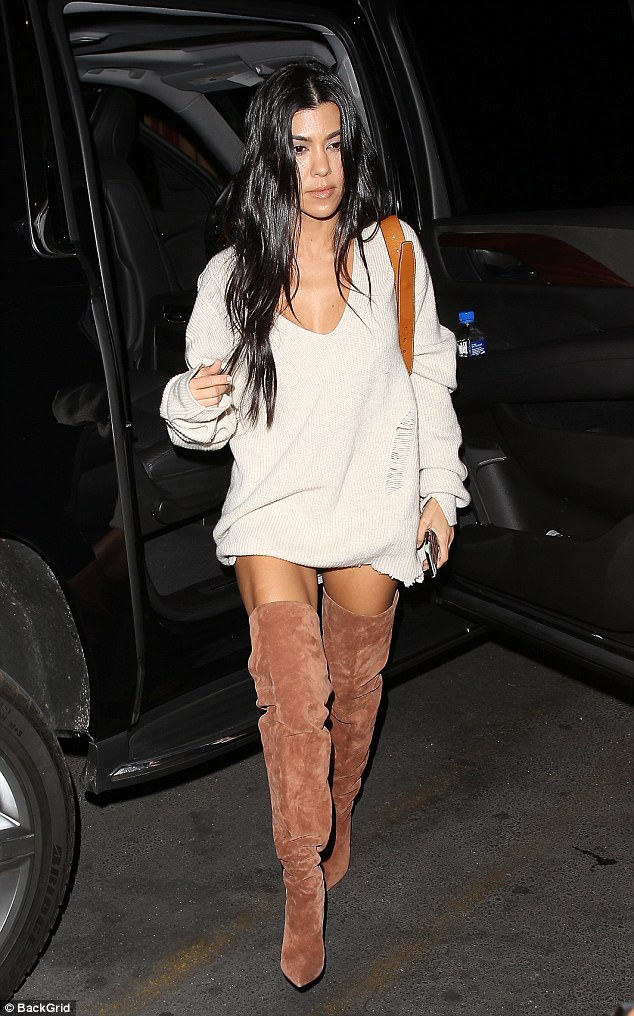 Legs for days! Inspired by the fall weather, Kourtney, 38, donned a slouchy sweater dress for the evening affair

According to The Sun, Kim is keen for the parents to be on their ‘top form’ when their baby arrives and wants to tackle Kanye’s weight in the months leading up to their due date.

A source told the publication: ‘She needs Kanye full of energy, so Kanye’s on a daddy diet that will see him work out three times a week, increasing to five times a week within six weeks.’

‘He’ll have a six pack by Christmas,’ they claimed, adding: ‘Kim doesn’t want to put extra pressure on [Kanye] but wants him to be feeling his best for the challenges of being a dad to three children.’ 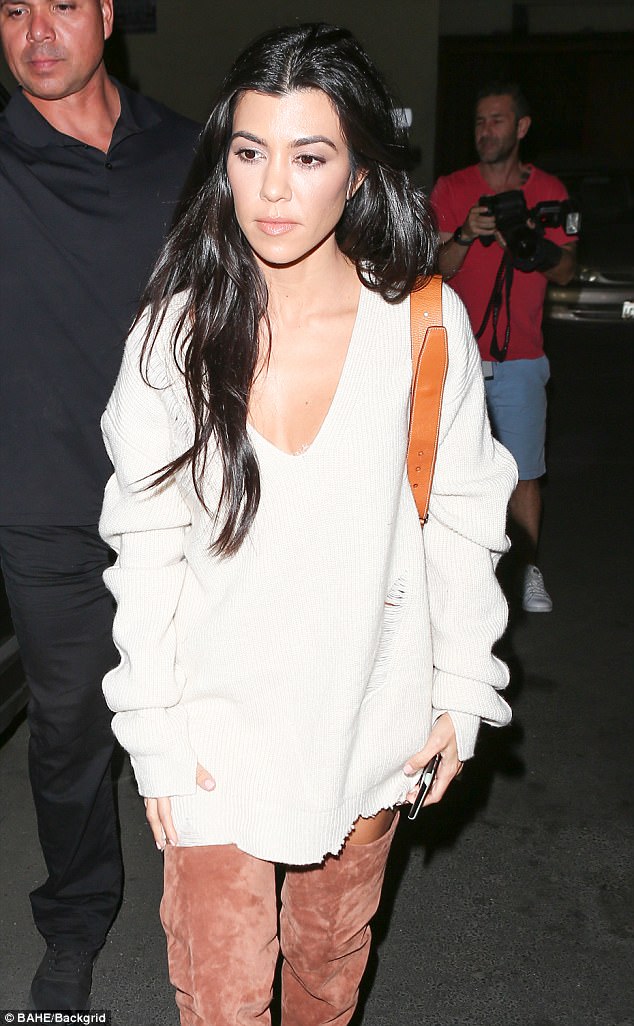 Carry all: The eldest of the Kardashian daughters carried a large brown bag on her shoulder into the restaurant

Meanwhile, Kourtney Kardashian, 38, cut a chic figure for the meal, as she stepped out sporting a slouchy ripped sweater dress that teased a look at her bust and came with an eye-wateringly short hemline.

She teamed her casual frock with a sultry pair of thigh-high suede boots that drew attention to her pins and her incredibly gym-honed physique.

Kourtney left her raven-hued tresses down in a tousled style that parted in the middle and opted for a subtle make-up look. 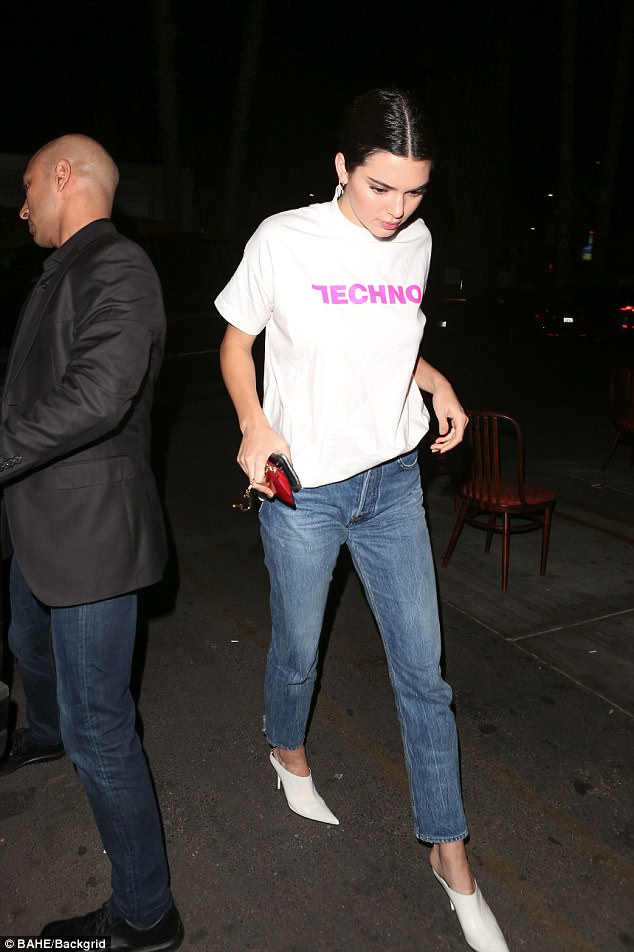 Dressed down: Kendall, 21, looked comfortably casual in an over-sized white T-shirt with the word ‘Techno’ emblazoned across her chest in vibrant pink writing

She was joined by her younger sister Kendall, 21, who opted for a casual ensemble that included an over-sized white T-shirt with the word ‘Techno’ emblazoned across her chest in vibrant pink writing.

She wore her locks in a sleek style, pinning her short tresses back from her face, and Kendall accentuated her striking natural beauty with a pared back make-up look. 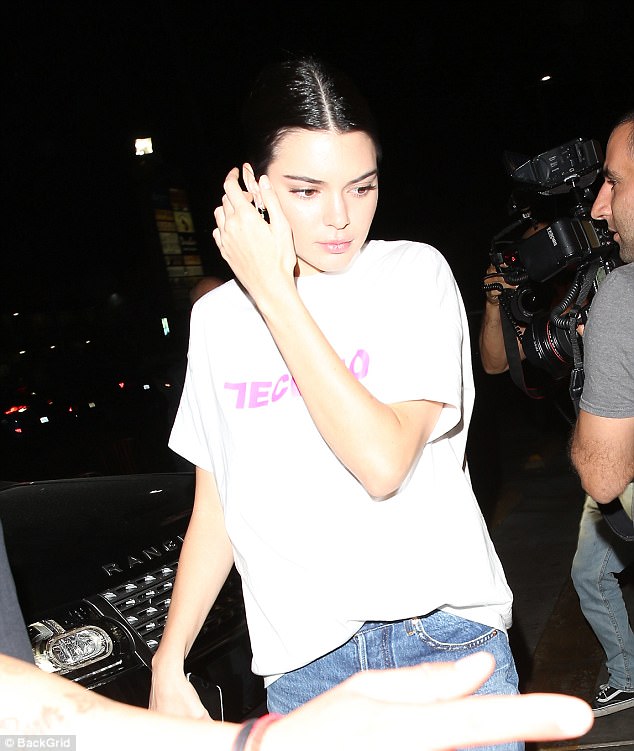 Cozy: She covered her long legs in a pair of over-sized blue jeans which were hemmed around her ankles

She decided to ditch the heels and sport a pair of black Vans on her feet and was spotted clutching onto a large studded tote bag in both hands.

Sporting a glamorous make-up look, Kris’ cropped dark tresses were perfectly coiffed – with the star opting for her trademark shade once more, after daughter Kim recently shared a snap of Kris sporting a platinum blonde ‘do. 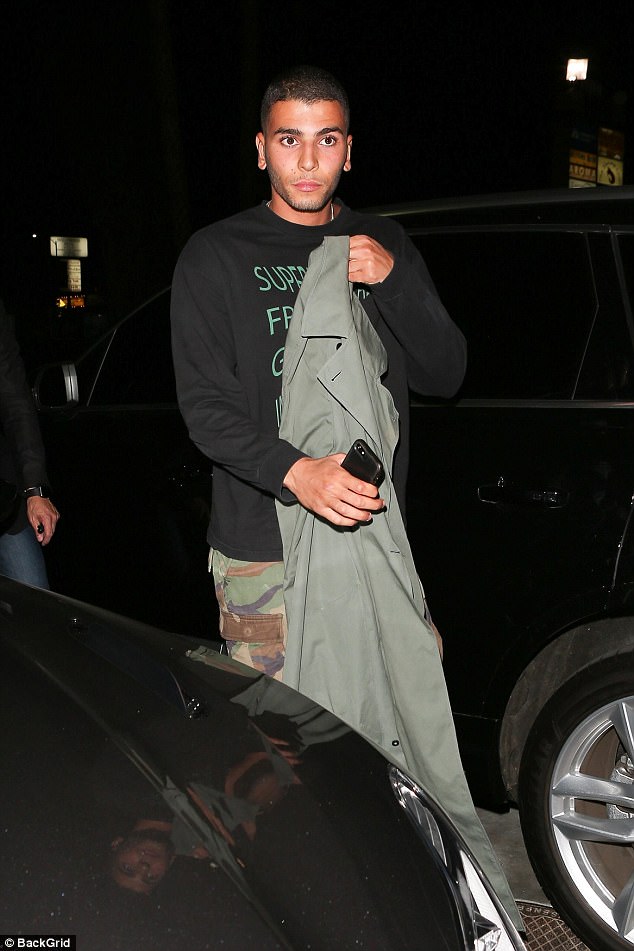 Where’d he go? Younes opted for a pair of camouflaged green and brown cargo pants and a long-sleeved black shirt

Friends of the family Jonathan Cheeban and Larsa Pippen joined in the festivities, with Kourtney’s boyfriend Younes Bendjima and Kris’ boyfriend Corey Gamble also in attendance.

Larsa looked looked dressed to thrill in tight black pants and a matching black top which could barely contain her ample assets.

Younes opted for a pair of camouflaged green and brown cargo pants and a long-sleeved black shirt.

Wearing a loud patched jacket, Jonathan went for a more grungy look in distressed denim pants, while Corey dressed up in a long-sleeved shirt and dark jeans.

Noticably absent from the celebration were Kim’s younger sisters Khloe, 33, and Kylie, 20, who are both reportedly ‘pregnant’ with their first child.

Khloe is said to be expecting with beau Tristan Thompson, while Kylie is believed to be starting a family wit boyfriend Travis Scott. Neither have addressed the speculation. 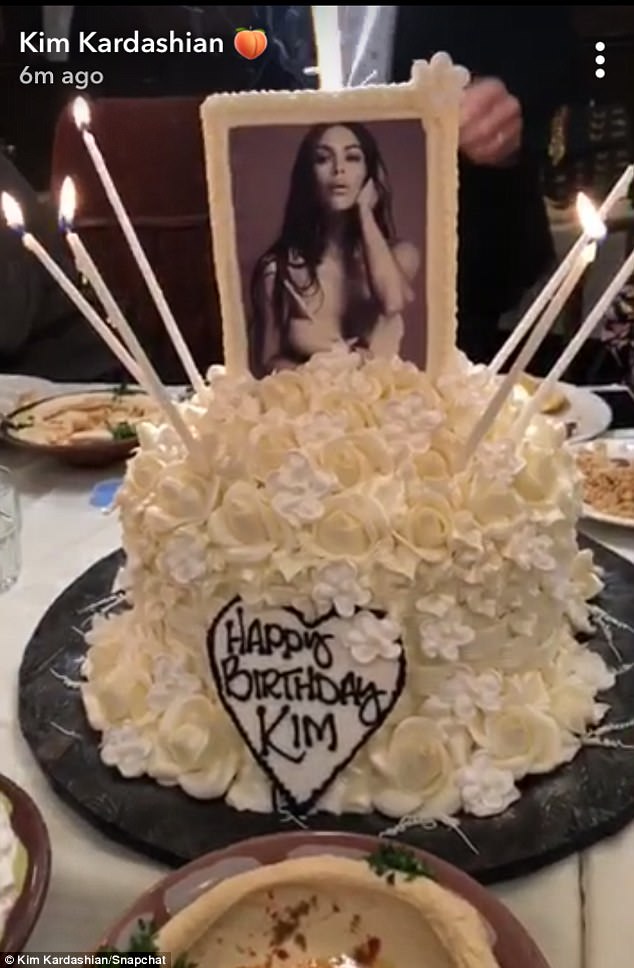 Birthday girl: Showing what she does best, Kim made sure to heavily document the meal on her Instagram account 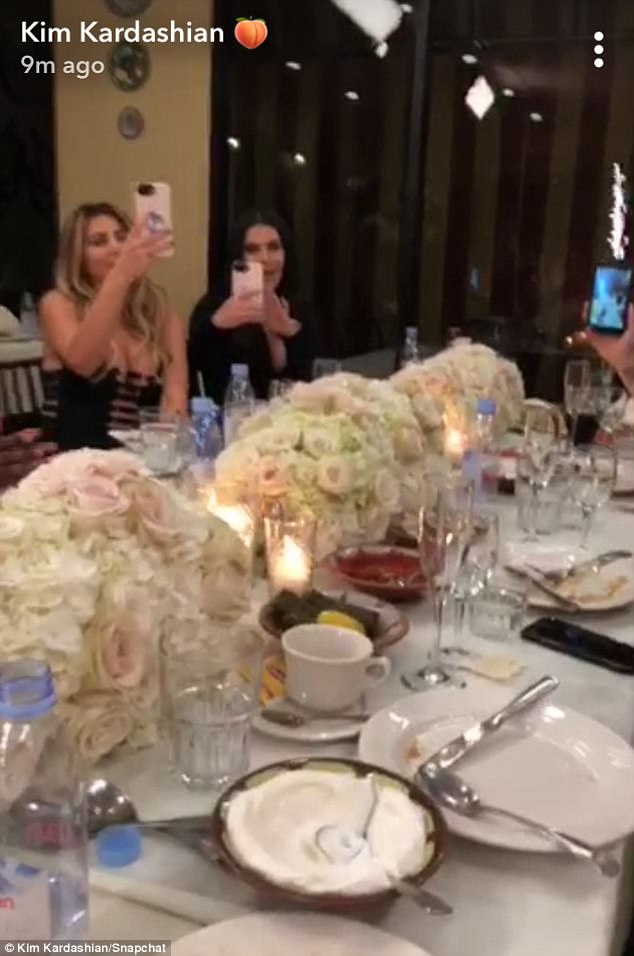 Gorgeous! Camera crews could be seen filming in the distance, likely for a new season of Keeping Up With The Kardashians

Meanwhile, Kim made sure to to heavily document her birthday meal on her Instagram account for fans to see.

The entire table erupted in cheers as a gorgeous floral birthday cake was brought to the table with a black-and-white image of Kim positioned on top.

Camera crews could be seen filming in the distance, likely for a new season of Keeping Up With The Kardashians.

Between an elaborate spread of delicious foods, desserts and flowers, the entire family seemed to want to keep memories forever as they stayed glued to their phones taking photos. 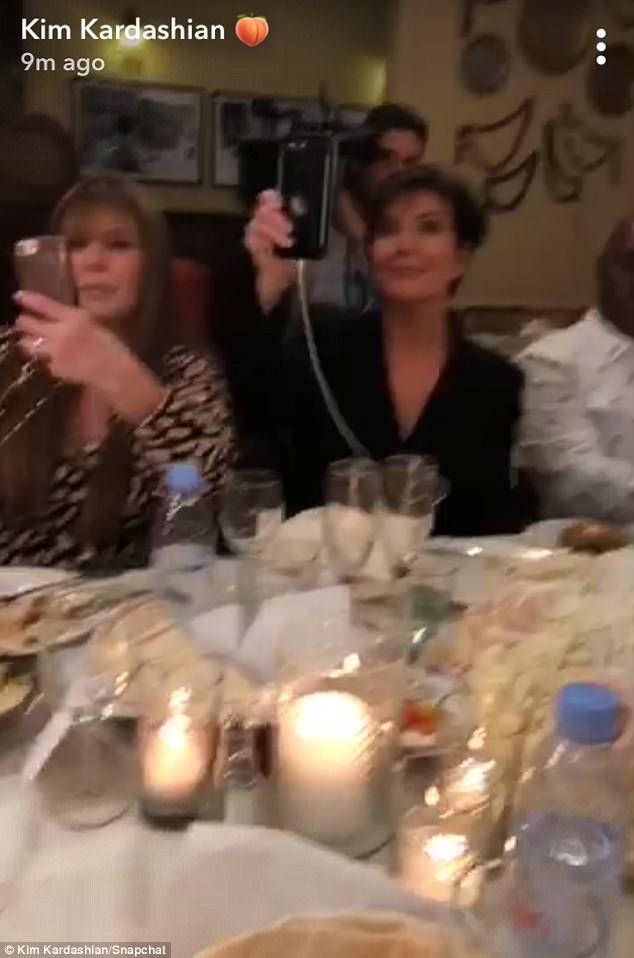 Recording! The entire family seemed to want to keep memories forever as they stayed glued to their phones taking photos 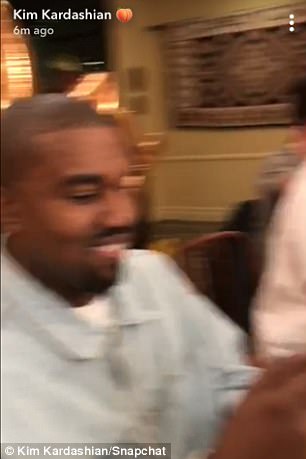 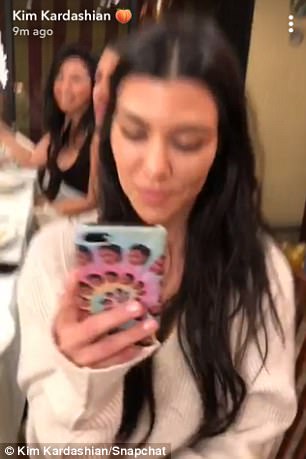 Smile! Kim laughed with Kanye and Kourtney as both played on their phones after dinner 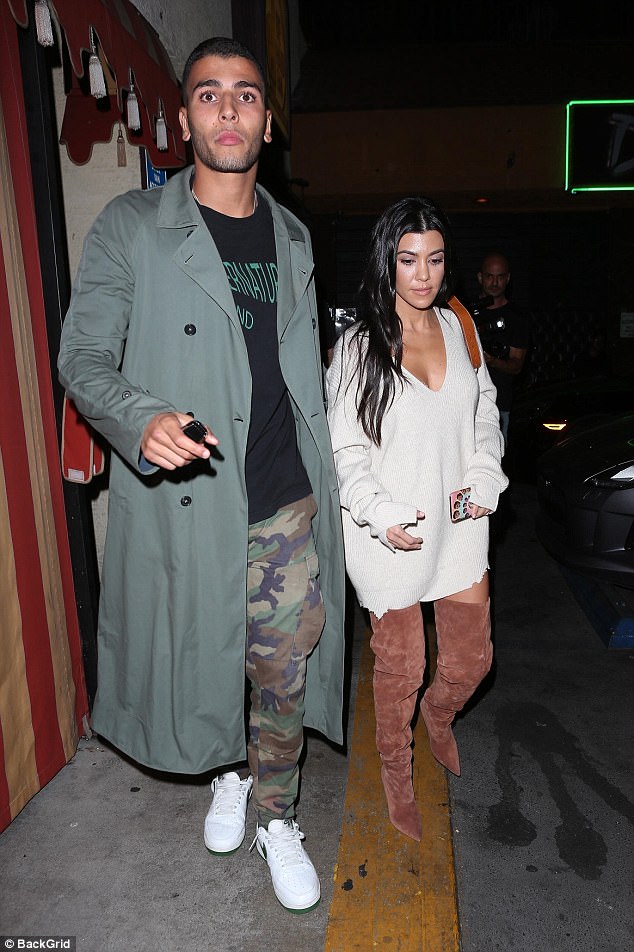 Walk this way: Younes proved to be quite the gentleman as he walked in front of his adoring girlfriend Kourtney

Prior to her birthday meal, Kim was spotted enjoying the sights and sounds during her annual tradition of going to Disneyland on her birthday.

The blonde beauty seemed to have a ball on Tuesday as she enjoyed kiddie rides with daughter North, aged four, and son Saint, aged one.

Sister Kourtney and her kids Mason, Penelope and Reign joined in the fun.

The reality beauty wore her long, bleached locks down and stepped out sporting an over-sized charcoal grey shirt with bicycle shorts and sneakers.

The KKW Beauty mogul also wore gold chains around her neck designed by husband Kanye West. Her daughter North stood out in a monochrome outfit complete with Minnie Mouse ears.

Not seen was rapper West, best known for his hit songs Paranoid and Stronger. 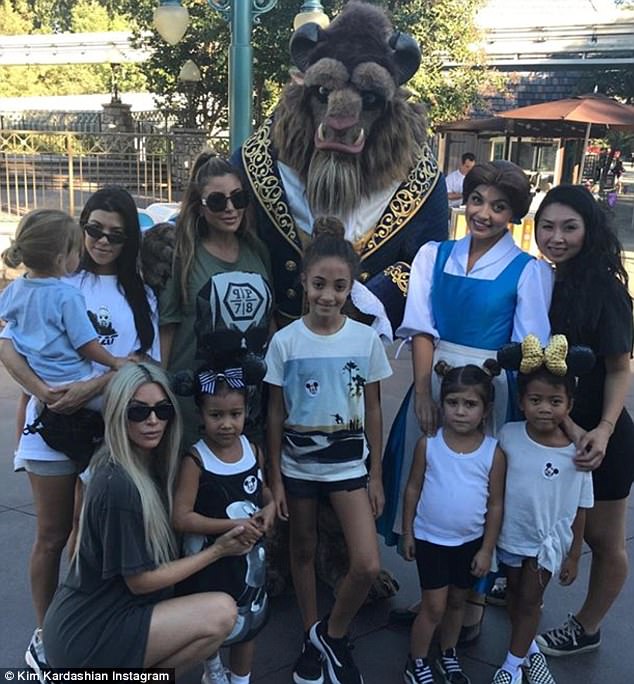 The happiest place on earth! Kim shared this photo with sister Kourtney,far left, and her good friend Larsa Pippen as well as their kids

The Keeping Up With The Kardashians star also shared a photo to Snapchat with the rest of her gang: good friend Larsa Pippen, 43, and her daughter Sophia as well as another female pal.

Kim documented the family outing on her Instagram stories, sharing a group photo of her the others posing alongside Belle and Beast from Beauty And The Beast.

‘Thank you @disneyland for a magical day,’ she captioned a photo of the park’s entrance.

The starlet was also seen treating herself to churros during the outing – having admitted in the past that she loves the sweet treat, but only eats them once in a while as she sticks to a strict Atkins diet.

Kim has lost over 70lbs since welcoming son Saint West in December 2015 and has been proudly flaunting her svelte frame on social media. 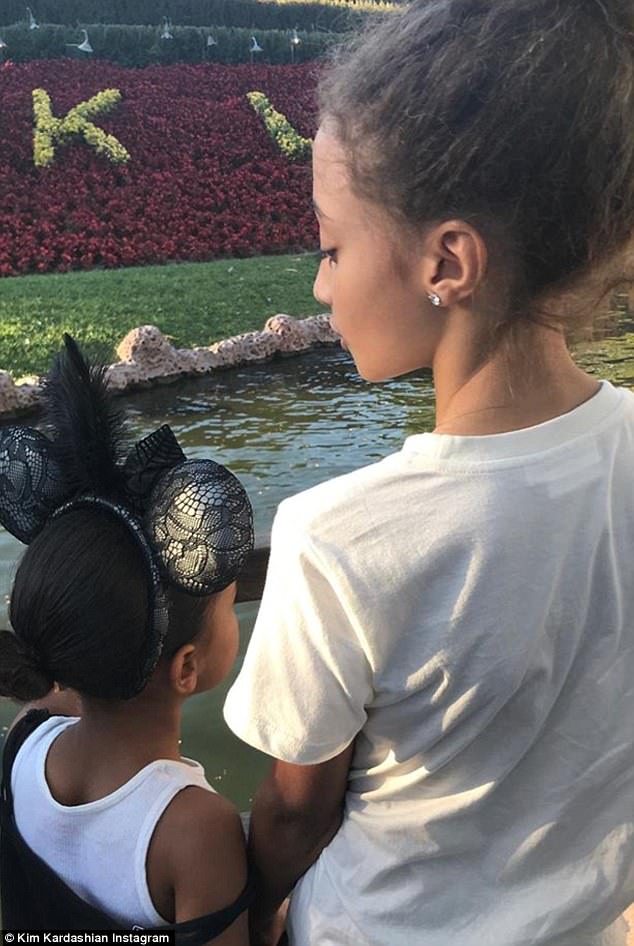 Aww: Among one of the photos was one of North wearing mouse ears as she stood alongside Sophia 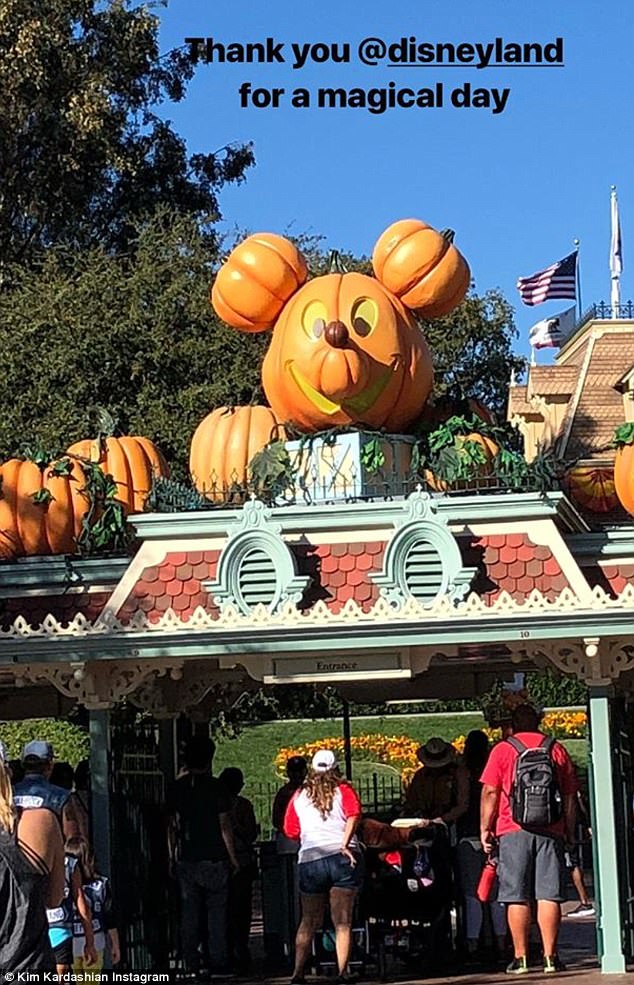 Family fun day: ‘Thank you @disneyland for a magical day,’ she captioned a photo of the park’s entrance