Kimberly Guilfoyle and Donald Trump Jr they head out for dinner

They have been busy hitting the fundraising circuit to promote his father’s agenda, but Kimberly Guilfoyle and Donald Trump Jr took time out for a loved-up dinner on Tuesday night.

The pair were pictured leaving Guilfoyle’s apartment building and heading to Manhattan’s Four Seasons where they stayed until 11pm.

As they left her home, Don Jr. stormed a few steps ahead. After dinner, he trailed behind her as they made their way into a waiting car with a bulky secret service agent trailing behind them.

Donald Trump Jr. and Kimberly Guilfoyle leave her apartment to go out for dinner on Tuesday night

Former Fox host Kimberly, 49, stuck to her tried and tested date-night formula of a form fitting dress, skyscraper stilettos and lashings of mascara and lip gloss.

The president’s son showed off his recently grown beard.

Before the lovebirds emerged, Warren Buffett was seen leaving the restaurant with associates.

The outing came a day after twice-divorced Guilfoyle gushed over her fast moving romance with the president’s son.

‘I’ve never been happier. I am thrilled to be joining Don Jr. across the country in amplifying the America-first message. 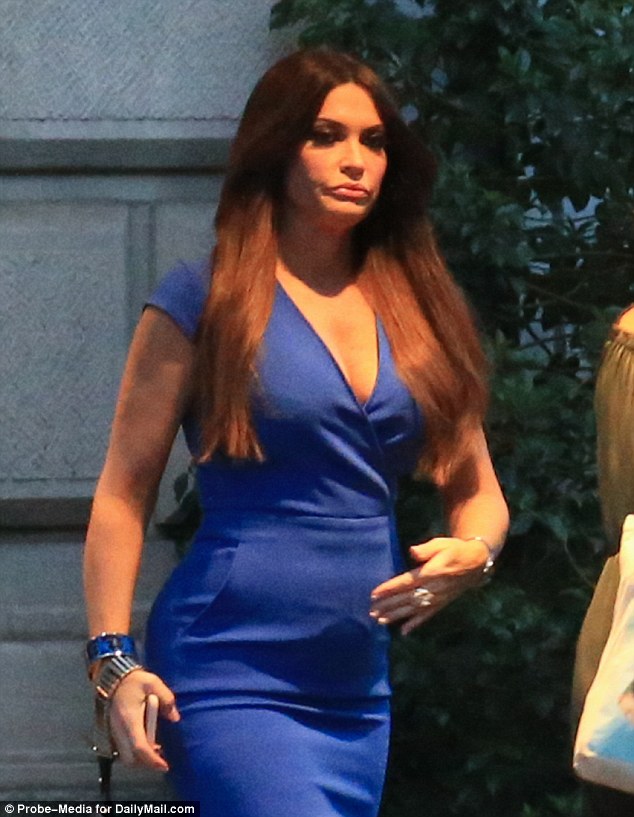 Guilfoyle, 49, wore a form fitting blue dress which she accessorized with silver jewelry and shoes 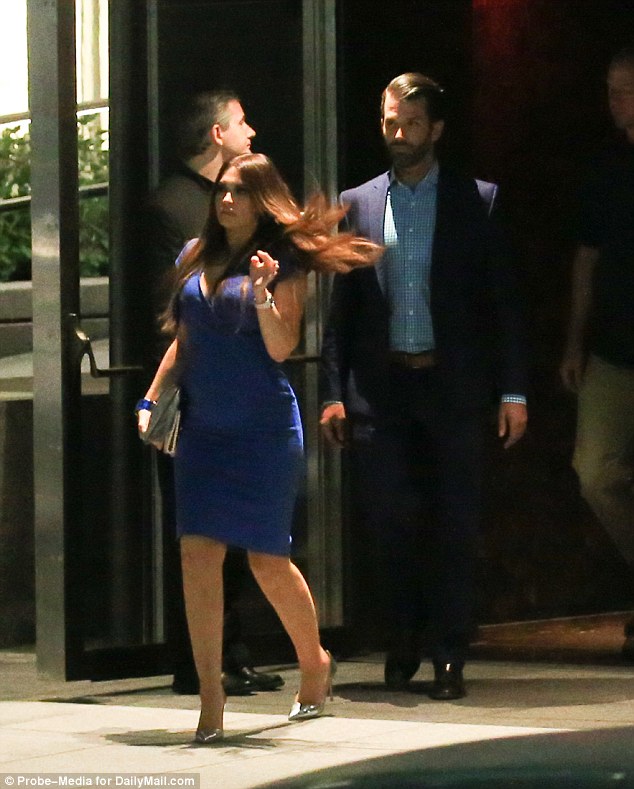 After dinner, Kimberly led the way out of the fancy eatery towards the couple’s waiting car ‘We are working non-stop and we make the perfect team,’ she told Page Six at a fundraiser in Bridgehampton.  It was their third of the week.

Since announcing their romance in June, Guilfoyle has left Fox News to work for the pro-Trump super PAC America First as its vice chairwoman.

They have been dating since he split from his wife Vanessa following 10 years of marriage in April.

Earlier this summer, Guilfoyle and Don. Jr. posed for a spread in her renovated Manhattan apartment and they have been tenacious in their politically charged public outings.

He heaped praise on her in the interview and said she was the natural choice for a position in the super PAC. 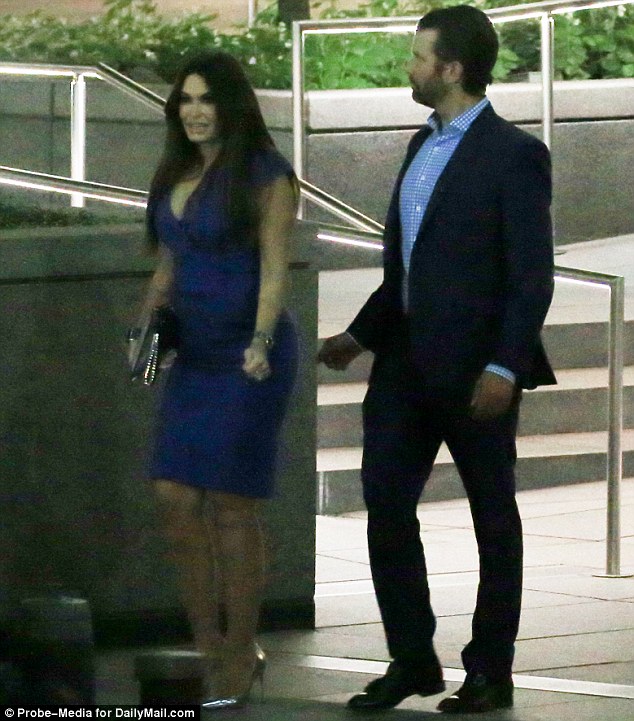 As they got closer towards their car, the couple became more animated 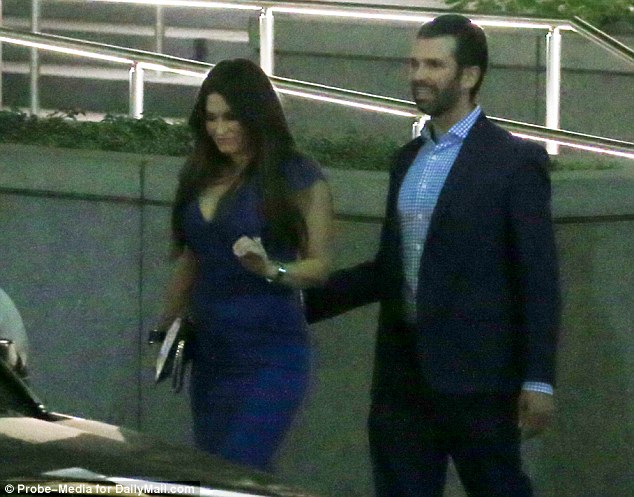 Don. Jr. placed a protective hand on his girlfriend’s back before they disappeared into the vehicle

‘Kimberly may be best known for her intellect, tell-it-like-it-is persona, and striking beauty, but it’s also her humble roots and her genuine love of people that make her the perfect choice to be the face of the grassroots movement that will reelect Donald J. Trump in 2020,’ he said.

In between fundraisers in the Hamptons and New York, the pair have spent their summer having date nights in the city and enjoying time with their children.

Don Jr. recently returned from an adults-only outdoor adventure trip in Yukon whereas Kimberly reunited with her son Ronan. 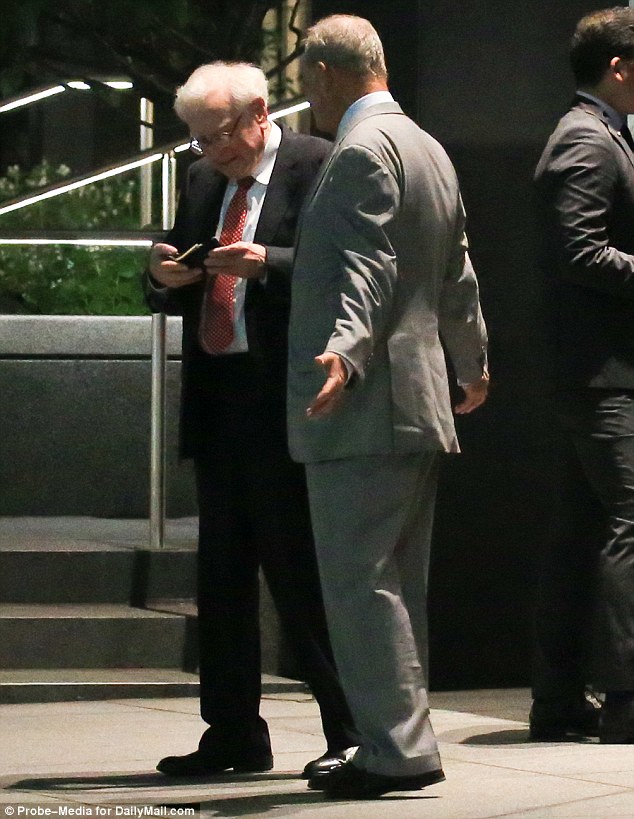 Billionaire investor Warren Buffett was also inside the restaurant on Tuesday but he left before Don Jr. and Kimberly