Kindergarten Cop is CANCELED and compared to Birth Of A Nation

Kindergarten Cop is CANCELED: Arnold Schwarzenegger’s 1990 comedy is pulled from film festival for ‘romanticizing over-policing children’ and is compared to Birth Of A Nation

The comedy film Kindergarten Cop has been pulled from a film festival after protesters claimed it glorifies police traumatizing children and compared it to the explicitly racist 1915 silent movie Birth Of A Nation.

Organizers of the NW Film Center in Portland, Oregon announced this week that the 1990 Arnold Schwarzenegger comedy would be pulled from the lineup and replaced with a documentary celebrating the late Rep. John Lewis.

Kindergarten Cop, which was filmed in Astoria, Oregon, had originally been selected for the festival for its importance to the state’s history in film making, and to honor its 30th anniversary, according to Willamette Week. 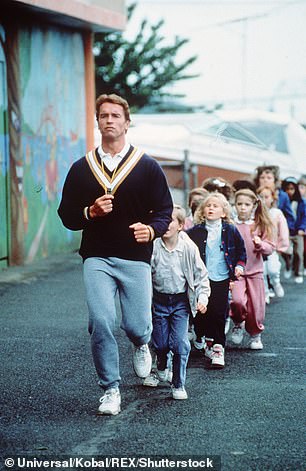 ‘Yes, KINDERGARTEN COP is only a movie. So are BIRTH OF A NATION and GONE WITH THE WIND, but we recognize films like those are not “good family fun,”‘ Leveen said in a tweet.

‘They are relics of how pop culture feeds racist assumptions,’ the author added.

‘There’s nothing entertaining about the presence of police in schools, which feeds the “school-to-prison” pipeline in which African American, Latinx, and other kids of color are criminalized rather than educated,’ Leveen said in another tweet.

Kindergarten Cop portrays a police officer, portrayed by Schwarzenegger, going undercover as a kindergarten teacher in order to catch a drug dealer who is targeting his own ex-wife and son.

The main character, who has no teaching experience, is shown struggling with classroom management before finding a passion for education and considering changing his career entirely. 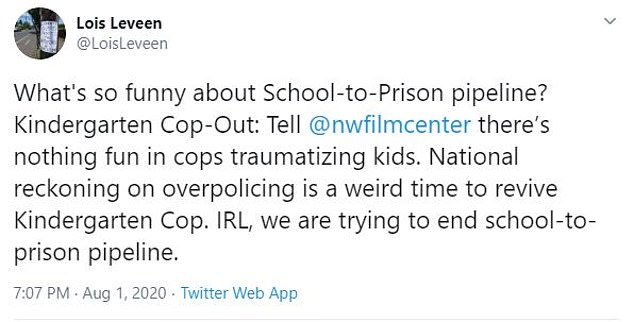 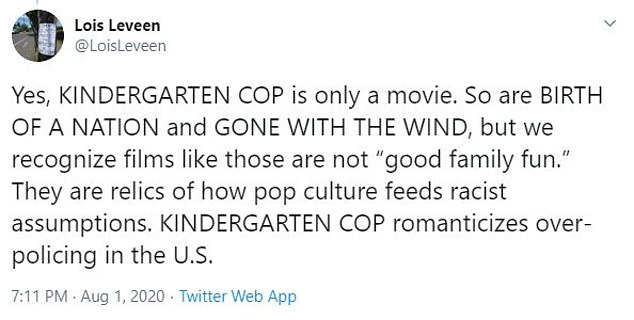 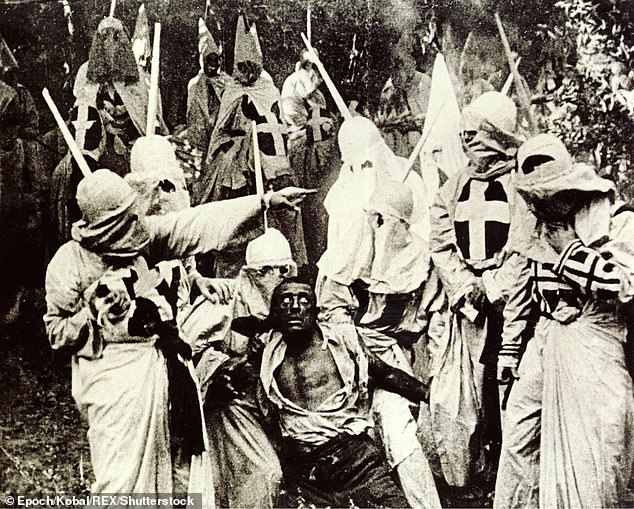 The film had been slated to kick off Portland’s Northwest Film Center’s Cinema Unbound Drive-in Theater on August 6.

It has been replaced by a second showing of John Lewis: Good Trouble, a documentary about the recently deceased congressman and civil rights leader.

Other films slated to run at the festival include Fast Times at Ridgemont High, Creature From The Black Lagoon, Xanadu, Pee Wee’s Big Adventure, and The Shining.

In recent months, protests have led to the cancellation of several police-themed television shows, including the long-running Cops and wildly popular Live PD.