Fragments of a hand-written medieval manuscript telling the story of Merlin the Magician from the legend of Camelot have been translated into English.

The text tells of battles between King Arthur and King Claudas, as well as the romance between Merlin and Viviane — sometimes known as ‘the Lady of Lake’.

The seven pieces of parchment date back some 770 years, and were discovered in 2019 among the University of Bristol’s Special Collections Library by researchers trawling though the ancient tomes.

Experts believe the fragments represent some of the earliest surviving examples of their section of the story.

They had been pasted into a four-volume copy of the works of the French philosopher Jean Gerson, published between 1494–1502.

The documents contain a continuous passage from the 13th Century set of Old French texts known as the ‘Vulgate’ or ‘Lancelot–Grail’ Cycle.

Scholars believe these texts were used as a source for Sir Thomas Malory’s ‘Le Morte d’Arthur’, on which many modern retellings of Arthurian legend are based.

The team used advanced imaging techniques to reveal damaged sections of the text previously invisible to the naked eye, and they also identified the ink used.

Fragments of a hand-written medieval manuscript telling the story of Merlin the Magician from the legend of Camelot have been translated into English. Researchers from the Universities of Bristol and Durham used advanced imaging techniques to reveal damaged sections of the text previously invisible to the naked eye. Pictured: one of the damaged fragments 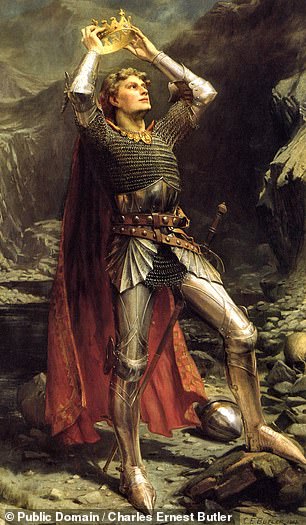 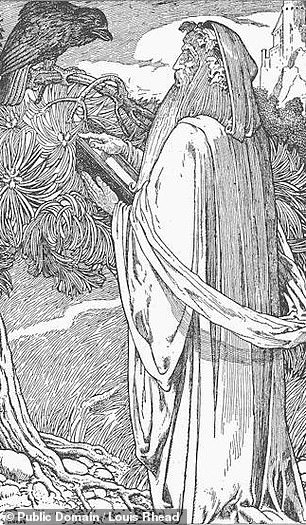 The text tells of battles between King Arthur (left) and his King Claudas, as well as the romance between Merlin (right) and Viviane — sometimes known as ‘the Lady of Lake’

THE STORY THAT WAS NEARLY LOST — WHEN IT WAS RECYCLED

Professor Tether and colleagues believe that the manuscript originally containing the Bristol Merlin fragments had been regarded as ‘waste’ back in the 16th century — and was basically recycled.

The pages were pasted into the Gerson volumes as binding, valued not for their content but their parchment.

Based on analysis of the other bindings materials used in the works, the team have concluded that the fragments were repurposed in Oxford, or perhaps Cambridge, sometime before 1520.

It is unclear exactly why the manuscript was discarded — but it may have been because of the availability of English-language retellings of Arthurian legend in the then-new medium of print.

The researchers suspect that the Gerson volumes were transported to  Bristol by one Tobias Matthew, who was the archbishop of York between 1606 and 1628.

Matthew likely acquired the works during his time as dean and bishop of Durham — when he made a habit of collecting books that had formerly belonged to local monks.

Many of these had Oxford bindings, as the monks were often educated at Durham College, Oxford — today known as Trinity College.

Matthew donated a large number of his books to the Bristol Public Library — which he co-founded — and it is quite likely that the Bristol Merlin arrived in the library collections among his bequest.

‘We were able to date the manuscript from which the fragments were taken to 1250–1275 through a palaeographic (handwriting) analysis,’ said paper author and medieval literature scholar Leah Tether of the University of Bristol.

Following that, she explained, a linguistic analysis ‘located it to northern, possibly north-eastern, France.

‘The Suite Vulgate du Merlin was written in about 1220–1225, so this puts the Bristol manuscript within a generation of the narrative’s original authorship.

‘We were also able to place the manuscript in England as early as 1300–1350 thanks to an annotation in a margin — again, we were able to date the handwriting, and identify it as an English hand.

‘Most manuscripts of the text known to have been in England in the Middle Ages were composed after 1275.

‘So this is an especially early example, both of Suite Vulgate manuscripts in general anywhere, but especially of ones known to have found their way to England from France in the Middle Ages.’

Key to the study, Professor Tether explained, was collaboration with Durham University chemist Andy Beeby and his team, who developed a mobile spectrometer specifically designed for studying manuscripts.

‘We captured images of damaged sections and, through digital processing, could read some parts of the text more clearly,’ she added.

‘This process also helped us to establish, since the text appeared dark under infra-red light, that the two scribes had in fact used a carbon-based ink — made from soot and called “lampblack” — rather than the more common “iron-gall ink”.’

Iron-gall ink was made from gallnuts — swellings on oak trees caused by chemicals injected into the tree by the larvae of gall wasps — and, unlike lampblack, appeared light-coloured when viewed under infrared illumination.

‘The reason for the scribes’ ink choice may have to do with what particular ink-making materials were available near their workshop,’ Professor Tether said.

Having been able to transcribe the Bristol Merlin into English, the researchers were able to identify various subtle but significant differences in this telling of the Vulgate Cycle in comparison with more modern iterations.

For example, descriptions of the actions of various characters are in places more detailed in this older version of the story, especially as regarded combat.

And in one part of the text, in which Merlin instructs on who will lead each of the four divisions making up Arthur’s forces, the four leaders chosen are different than in the better-known, later versions of the narrative.

Other differences are more minor in nature. For example, in modern retellings of the legend, King Claudas — Arthur’s opponent who ruled over a region in central France known as Terre Deserte, the ‘Land Laid Waste’ — is wounded through the thighs. 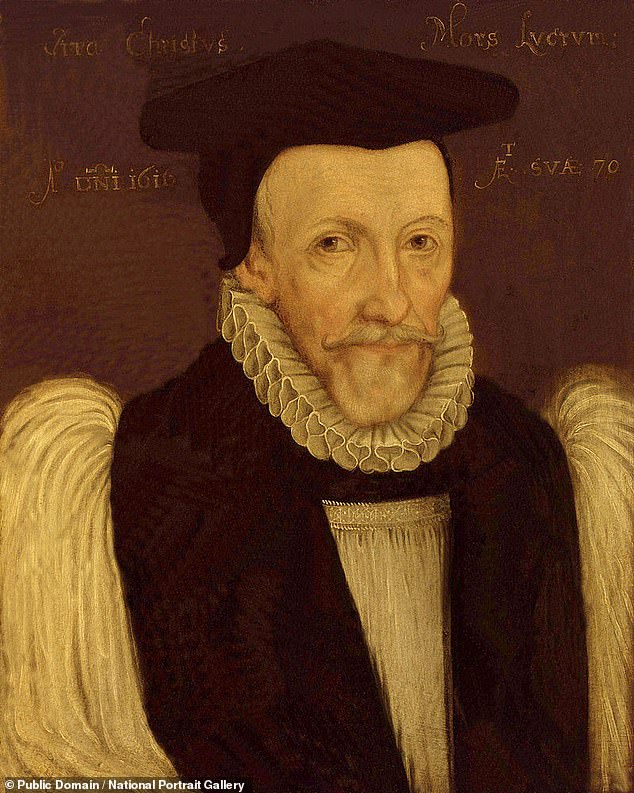 Thigh wounds are often used as metaphors for impotence or castration, the team explained, allowing for a different interpretation of the story in such versions to that of the Bristol Merlin, in which the exact nature of the wound is not described.

Another discrepancy between the narratives comes in the form of Merlin’s encounter with the enchantress Viviane — the character known in many later interpretations of the Arthurian legend, like Malory’s, as ‘the Lady of the Lake’.

Unlike more modern versions of the tale, in which Viviane seduces Merlin and imprisons him in a tower where they make love (before ultimately leaving him in a magic tomb to die a slow death), the account is somewhat toned down.

Merlin stays with Viviane for a week, apparently falling in love with her, but is said to resist sleeping with her before he returned to Arthur’s side. 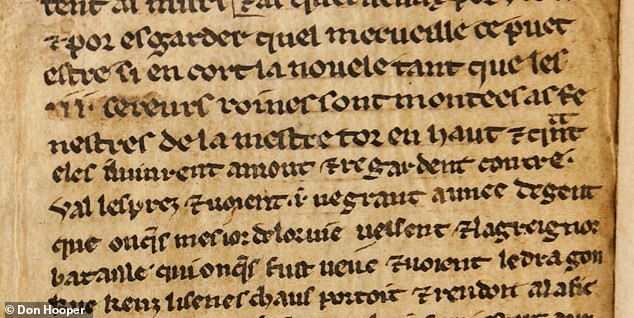 Experts from the Universities of Bristol and Durham believe that the fragments represent some of the earliest surviving examples of their section of the story. Pictured: this close-up of one of the manuscript fragments has revealed that it was penned by two different hands 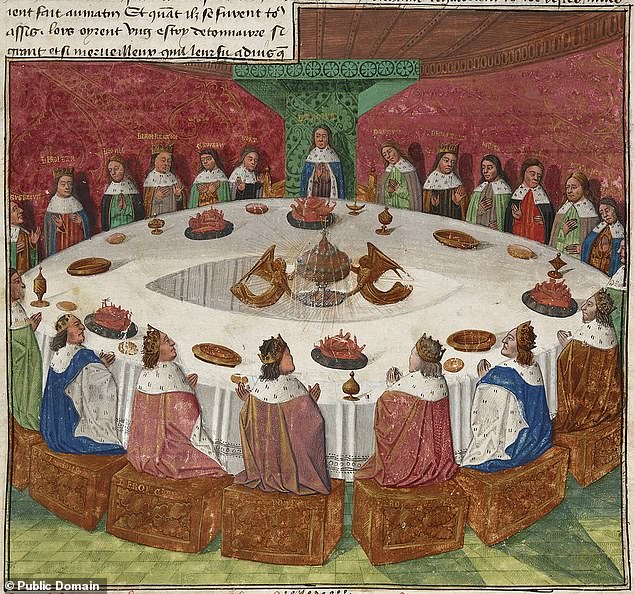 The documents — the ‘Bristol Merlin’ — contain a continuous passage from the 13th Century set of Old French texts known as the ‘Vulgate’ or ‘Lancelot–Grail’ Cycle. Pictured: an artist’s impression of King Arthur’s ‘Round Table’, with a vision of the holy grail seen in the centre 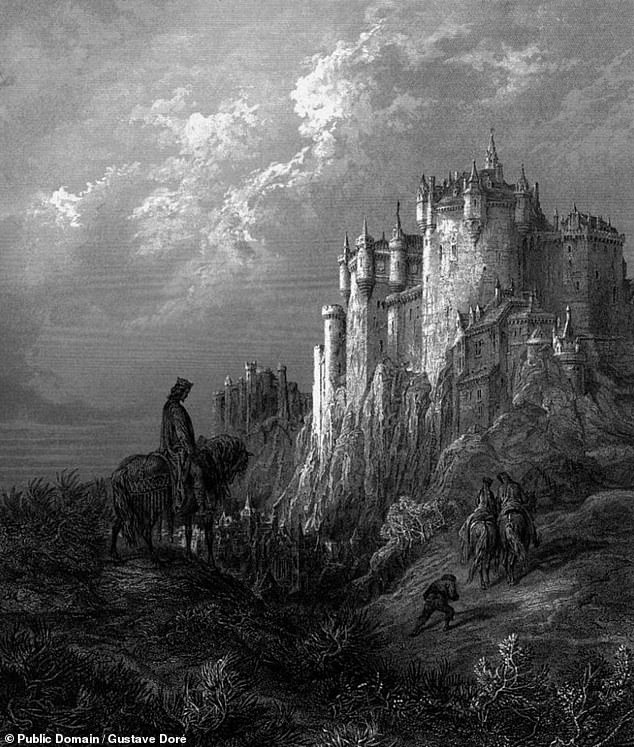 The seven pieces of parchment — which date back some 770 years — were rediscovered in 2019 among the University of Bristol’s Special Collections Library. Pictured: Gustave Doré’s illustration of Camelot from Alfred, Lord Tennyson’s 1867 work ‘Idylls of the King’ 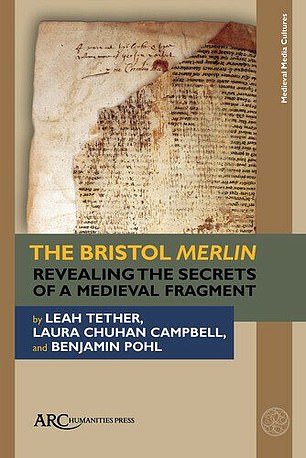 The full findings of the study are published in the book ‘The Bristol Merlin: Revealing the Secrets of a Medieval Fragment’, pictured

‘One thing that undertaking this study, edition and translation of the Bristol Merlin has revealed is the immeasurable value of interdisciplinary and trans-institutional collaboration,’ added Professor Tether.

In this case, he continued, collaboration ‘has forged a holistic, comprehensive model for studying medieval manuscript fragments that we hope will inform and encourage future work in the field.’

‘It has also shown us the very great potential of local manuscript and rare book collections in Bristol — particularly in the Central Library, where there are many more unidentified manuscript fragments awaiting discovery.’

The full findings of the study are published in the book ‘The Bristol Merlin: Revealing the Secrets of a Medieval Fragment’, by ARC Humanities Press. 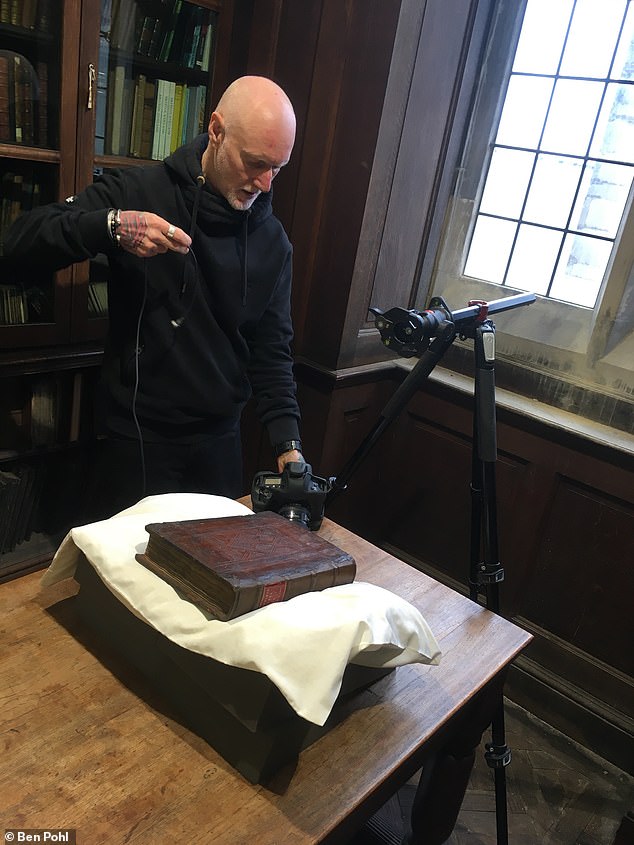 Experts from the Universities of Bristol and Durham believe that the fragments represent some of the earliest surviving examples of their section of the story. Pictured: one of the Gerson volumes containing the Bristol Merlin fragments is photographed by Don Hooper 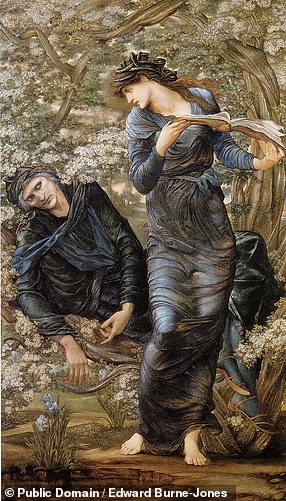 Pictured: the ‘Beguiling of Merlin’ by the Lady of the Lake (known in the Bristol fragments instead as Viviane), as painted by Edward Burne-Jones in 1874

While they were bound in the wrong order, the text on the Bristol Merlin parchments together tell a continuous sequence from the Vulgate Merlin narrative — specifically, a section known as the ‘Suite Vulgate du Merlin’.

This part of the tale begins with Kings Arthur, Ban and Bohors — along with Merlin, Gawain and other knights — preparing for a battle at Trebes, in southern France, against the forces of King Claudas. Merlin prepared a strategy for the attack.

Following is a lengthy description of the battle, during which Merlin gives a speech to Arthur’s seemingly beleaguered forces urging them to avoid cowardice.

This encourages them to fight on with renewed vigour, with Merlin leading the charge bearing the dragon standard of Sir Kay, one of the knights, which breathes real fire:

‘Merlin arrived with his company, which consisted of more than a thousand worthy knights.

‘He was carrying the dragon banner in his hand, and such huge flames were shooting out of its mouth that the air all around it—which was so dark with the dust that had been kicked up that they could barely recognize each other—glowed bright red.

‘Those who were seeing it for the first time were saying that Our Lord must have been furious with them.

When the banner appeared, the tide of battle was turned against the winning side, because as soon as the thousand companions charged among them, they began to perform extraordinary feats of arms, cutting down so many people that they quickly made an impression.’

The battle concludes with Arthur and his forces triumphant — after which they are all accommodated in the Castle of Trebes.

That night, King Ban and his wife, Queen Elaine, conceive a child. Both go on to have strange dreams — Elain’s about a lion and a leopard, in which the latter represents their unborn son, while Ban’s involves a terrifying voice.

Ban wakes up and goes to church.

The story continues by describing how Arthur, Ban and Bohors spend the next month continuing to fight — and proving victorious over — Claudas in the kingdom of Benoic.

However, the tables are resoundingly turned when Arthur leaves to take care of matters in his own lands and Claudas becomes triumphant.

Next, the narrative offers a partial explanation of Ban and Elaine’s dream from Merlin, before the wizard meets with Viviane — the character known in many later interpretations of the Arthurian legend as ‘the Lady of the Lake’.

Viviane is seeking a method to put her parents to sleep.

‘The girl [Viviane] made Merlin lie down in her lap, and she started to ask him questions. She moved around him, and seduced him again and again until he was sick with love for her.

‘And then she asked him to teach her how to put a man to sleep.

‘And he knew very well what she was planning, but nevertheless, he could not prevent himself from teaching her this skill, and many others as well, because Our Lord God wanted it this way.’

Merlin stays with Viviane for a week — apparently falling in love with her — but is said to resist sleeping with her.

The Bristol fragments conclude with Merlin returning to Benoic, where he meets up once again with Arthur and his companions.