Twenty years ago – or very nearly – Guy Ritchie and Matthew Vaughn burst on to the feature- film-making scene with the now iconic thriller Lock, Stock And Two Smoking Barrels. With Ritchie as its director and Vaughn producing, their film broke all the rules – it was fast, free-wheeling and funny with a laddish swagger that was impossible to ignore. There was definitely a new breed of creative geezer in town.

Almost two decades on – Lock, Stock was released in 1998 – and I find myself harbouring the suspicion that both men may now have gone, er… creatively bonkers together at more or less the same time too.

For having already sat through Ritchie’s extraordinary King Arthur: Legend Of The Sword this year – a film that mixed dragons, Arthurian legend and David Beckham to near-disastrous box-office effect – I now find myself enduring Vaughn’s sequel to Kingsman: The Secret Service only to discover that it’s even madder than the 2014 original, although, unlike Ritchie’s film, this won’t stop it enjoying some degree of success at the box office. 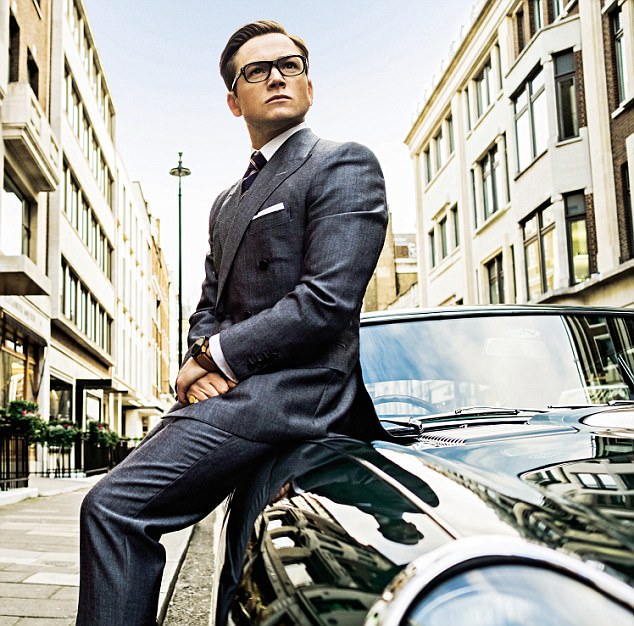 I know that Taron Egerton (above) is a good actor but, my goodness, it’s difficult to warm to his central performance here as Eggsy 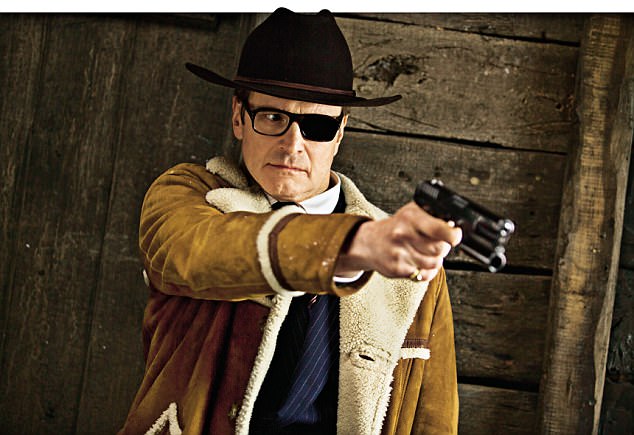 Not even the return of Colin Firth (above) to the Kingsman world of Savile Row suit-clad, umbrella-twirling gentlemen spies helps.

Both men have lost that vital instinct of knowing when to stop, of knowing when they’ve pushed things far enough. These days, the results tend to be sprawling – Kingsman: The Golden Circle runs to a whopping 141 minutes – incoherent and, putting it bluntly, something of a mess.

To be fair, Vaughn drops a heavy hint of the creative mayhem to come right from the start, kicking things off with John Denver’s Country Roads being played by a Scottish pipe band, introducing us to a villain with a super-strong bionic arm and killing off Keith Allen inside ten minutes. But from the minute an opening taxi chase through London very obviously depends on visual effects for its big moments (where’s the fun in that?), my spirits dropped and frankly never picked up again. Like its predecessor, this Kingsman film doesn’t grip, it doesn’t charm, it doesn’t entertain… or not nearly enough.

Yes, second time around Kingsman is anchored far more obviously in the world of the normal-rules-defying comic book but it’s no more interesting. Not even the return of Colin Firth (come on, you’ve seen the premiere pictures, that doesn’t count as a spoiler) to the Kingsman world of Savile Row suit-clad, umbrella-twirling gentlemen spies helps.

His character was shot in the eye at point-blank range last time around for goodness’ sake, making a ‘return’ impossible, you would think. But not in the world of Kingsman where, with Jane Goldman sharing screenplay writing duties with Vaughn for a fourth time (they also wrote Stardust and Kick-Ass together, as well as the original Kingsman), anything is possible. So it’s just one contrived or implausible turn after another thanks to ‘alphagel’, ‘micro-bot repair’ and the like.

It’s also a rather dishonest film, promising a welter of big American stars but only really delivering an undeniably on-form Julianne Moore, seizing the opportunity to show she can do dark, taboo-trampling comedy playing Poppy, the diner-loving, burger-flipping – and, oh, yes, psychopathically insane – head of the world’s biggest drugs cartel, the Golden Circle.

She brands her workers with 24-carat gold, protects herself with land mines and deadly robot dogs and – oh, yes – she’s kidnapped Elton John, who is to this film what Beckham was to Ritchie’s. Only slightly funnier, more foul-mouthed and eventually over-used. 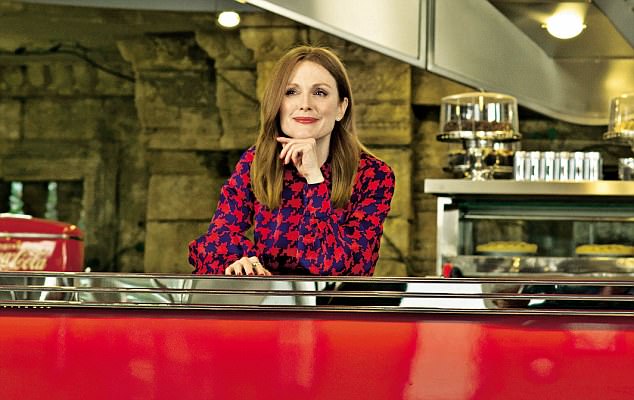 It’s also a rather dishonest film, promising a welter of big American stars but only really delivering an undeniably on-form Julianne Moore 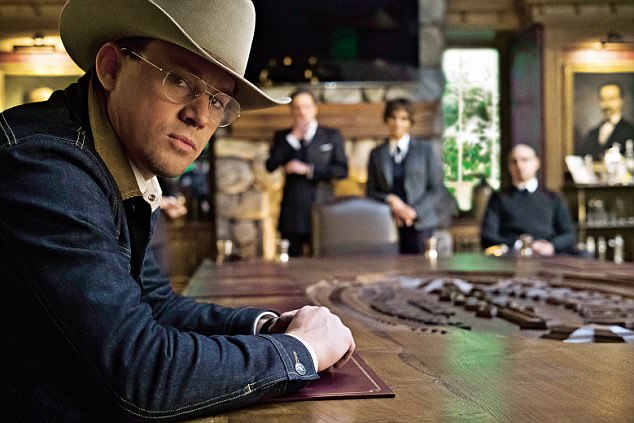 Channing Tatum, having turned up with a Stetson and a near-incomprehensible Southern drawl, disappears pretty much for the duration

But elsewhere, Channing Tatum, having turned up with a Stetson and a near-incomprehensible Southern drawl, disappears pretty much for the duration (the smart money says he’s saving himself for the franchise’s third film), the normally excellent Jeff Bridges is properly terrible as the head of Statesman, the American equivalent of Kingsman, and the Oscar-winning Halle Berry contents herself with the sort of minor supporting role that suggests, like Tatum, she’s been tipped the wink of better things to come. Suddenly that glittery cast list doesn’t look quite so glittery after all.

Having hugely enjoyed Eddie The Eagle, I know that Taron Egerton is a good actor but, my goodness, it’s difficult to warm to his central performance here as Eggsy, the tiresomely street-accented oik who somehow made it into the Kingsman league of gentlemen first time around and is now leading the way as the organisation comes under deadly attack from the Golden Circle and suddenly finds itself in need of its American cousins, the Statesman organisation.

I did, however, like some things amid all the familiar James Bond spoofery, particularly the underwater entrance concealed beneath the dark water of the Serpentine in London’s Hyde Park. There’s also a clever drugs trade twist later on.

But the product placement is tedious (Vaughn is apparently keen to turn Kingsman into an upmarket brand itself) and the comedy as laddish as it is laboured with poor Poppy Delevingne, who also had the misfortune to be in King Arthur, a particular victim of Vaughn’s lack of judgment. Time to refocus, lads, time to grow up.

Tennis does not lend itself to films, but this autumn there are two, with the most eagerly awaited – Battle Of The Sexes, a recreation of the famous 1973 encounter between Billie Jean King and Bobby Riggs – due out in November. 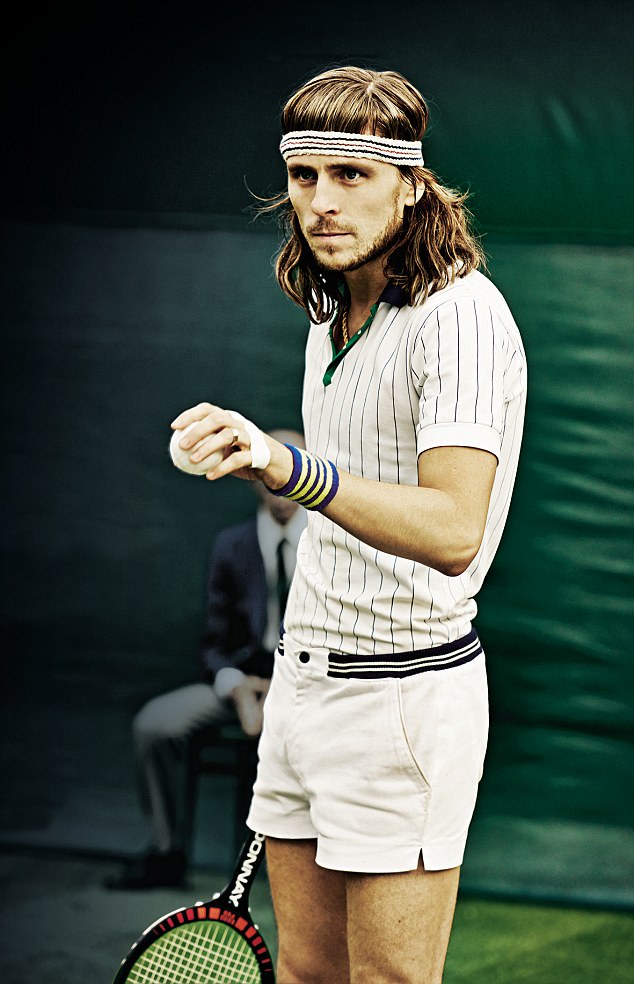 Swedish actor Sverrir Gudnason (above) is astonishingly convincing as the ice-cool Borg, while Shia LaBeouf gives it his best shot as the volatile McEnroe

So, we can warm up with Borg Vs McEnroe, which recreates events leading up to the epic Wimbledon final of 1980, when the great Bjorn Borg was aiming to land his fifth title in a row while the unruly upstart John McEnroe was out to stop him. I went in having totally forgotten who had won and if you can do the same, I’d recommend it. With a hefty chunk dedicated to the final – widely considered to be one of the greatest games ever – not knowing the outcome definitely adds to the excitement.

Swedish actor Sverrir Gudnason is astonishingly convincing as the ice-cool Borg, while Shia LaBeouf gives it his best shot as the volatile McEnroe – and, yes, we do get the notorious ‘You cannot be serious!’

I loved being reminded of a time when the likes of Jimmy Connors, Vitas Gerulaitis and Ilie Nastase made tennis such a compelling game, but despite sterling supporting work from the everreliable Stellan Skarsgard as Borg’s coach, the end result lacks the vital cinematic oomph to make it a classic.