Kirstie Allsopp, pictured at this year’s RHS Chelsea Flower Show, has hit out at friends who do not consider the ‘horror of county lines drug dealing’ on her Twitter account

Kirstie Allsopp has slammed ‘friends’ who take drugs on a regular basis and questioned whether they think about the ‘horror of county lines drugs dealing.’

The TV personality, 47, took to Twitter and asked her followers if these people ‘feel totally ‘s**t about themselves’.

Hundreds of people have liked Kirstie’s post since it was made yesterday afternoon, with some agreeing that casual drug users do not think about the impact.

Earlier this week police warned that drug dealers were targeting British seaside towns such as Bournemouth and Redruth.

Kirstie said: ‘When people who take drugs on a regular basis, friends of mine amongst them, see the horror of county lines drugs dealing and the damage done to very young people, do they feel totally shit about themselves or do they just think roll on legalisation?’

One person replied saying they have seen how ‘vulnerable’ young people can become embroiled in county lines.

They tweeted: ‘I see the fall out from county lines is the courts – we have no idea how to deal with the young adults caught up in county lines – they are incredibly vulnerable – all to supply some middle class cocaine user, who will rarely see the inside of a magistrates court.’

And another person said cocaine is a regular part of their industry and added that they do not think users consider where the drugs came from.

They said: ‘I don’t think they ever consider it. Coke is rife in the industry I work in, at every event the company throws, but because they’re not buying it from a black nine-year-old on a street corner they think they’re not part of the problem.

The TV personality asked if people. including her friends ‘feel s**t’ about themselves when they take drugs after seeing the ‘horror’ of county lines dealing

While someone else said: ‘I have always thought they tackle the drug problem the wrong way round.

‘Be tougher on the people taking the drugs that are destroying lives further down the line.’

Another Twitter user tried to defend drug users saying that having an ‘addiction’ means they might not consider where the substance is coming from, just where they can get it.

They said: ‘But when you are caught up in an addiction you don’t think…all your thoughts are on the next fix.’ 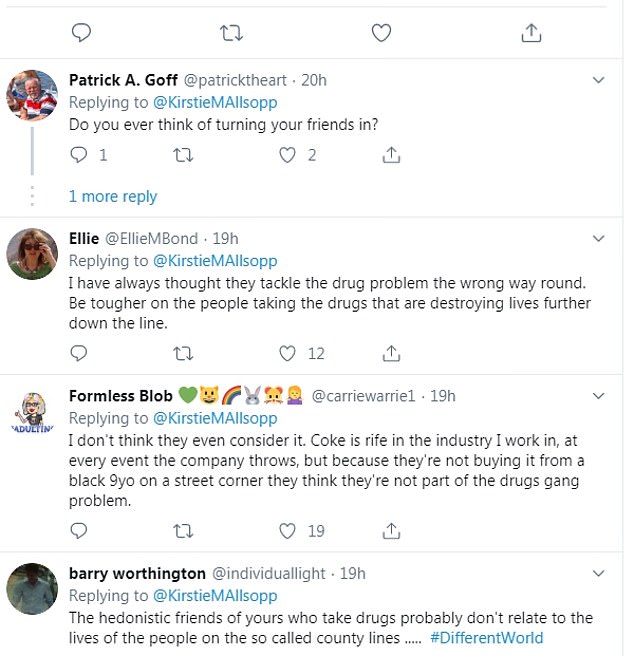 Several people asked if Kirstie would turn her friends in, while someone else said their world probably doesn’t ‘relate’ to those on the ‘county lines’

Kirstie quickly replied and clarified that: ‘I’m not talking about addicts, you’re not an addict when you do a couple of lines every now and then.’

Earlier this week it was reported that British seaside towns are being targeted by county line drug dealers who operate like supermarkets and are putting local criminals out of business.

Police warned that dealers from the major cities are now expanding their territory by going into towns with cheaper priced substances and pushing out ‘corner shop’ dealers. 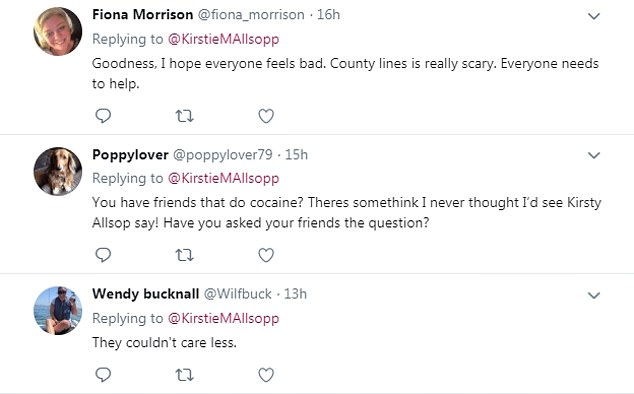 The drug trade is exploding in small towns and the National Crime Agency has estimated half of the communities targeted by organised dealers are by the sea.

Coastal towns such as Bournemouth, Exeter, Weymouth and Redruth have become targets because there is less resistance from other dealers and a lower risk of being known by police.

He said: ‘I want us to close down the evil “county lines” drugs gangs that have done so much to spread knife and gun crime to hitherto innocent towns and communities, and I want the key gang members arrested and put away. We did it before and we can do it again.’