When Kirstie Allsopp became the latest celebrity to publish a glossy cookbook, she was happy to heap praise on the woman who inspired her – her great-great- grandmother.

But it seems there was a limit to Kirstie’s devotion, because she was careful to avoid some of her aristocratic forebear’s more exotic recipes, including lark pudding.

In the introduction to her book, Kirstie’s Real Kitchen, Location, Location, Location presenter Allsopp gushes: ‘Oddly someone I’ve never met – my great-great-grandmother Minnie, Lady Hindlip – has influenced me. That’s because I happened to come across a copy of the cookbook she published in 1933. It offers a fascinating insight into life back then, but some of her recipes definitely stand the test of time and are included in this book.’

Lady Hindlip’s lark recipe probably explains why Allsopp thought better of using it. It tells the cook to ‘proceed to prepare the larks by boning and removing the gizzard of twice as many larks as there are persons to dine, line a dish with suet pastry and add larks, steak and onions fried in butter.’

Not surprisingly, Allsopp, 46, also chose to steer clear of another dish with the title N***** Rice – and cooking instructions – that would be considered deeply racist and offensive.

Lady Hindlip, Georgiana Millicent Palmer-Morewood, was the wife of Samuel Allsopp, the 2nd Baron Hindlip and heir to a brewing fortune accrued through the export of pale ale from Burton-on-Trent across the globe. Kirstie is the daughter of Charles Allsopp, the 6th Baron Hindlip.

Besides recipes, Lady Hindlip’s book, written for the chatelaines of grand country houses, offers a wide-ranging miscellany of household tips. They include how to deal with a dead body – it should be wrapped in a sheet kept wet with a solution of carbolic powder and water and the room fumigated by burning four ounces of sulphur – and how to make boot polish from gum arabic, sugar, ink, half a pint of sherry and the same volume of spirits.

She also included a cure for wasp stings, which involves chewing on an onion, and serves up a melange of dubious scientific theories, including how to avoid poisoning from seafood by cooking it with a pinch of washing soda.

First published in 1925, the book was sufficiently successful to see a revised edition released in 1933, six years before Lady Hindlip died. 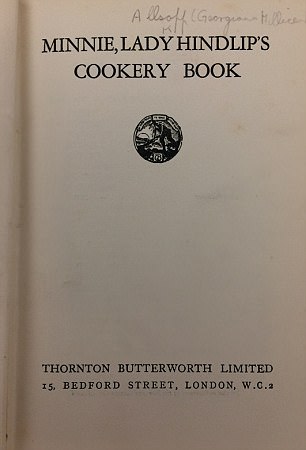 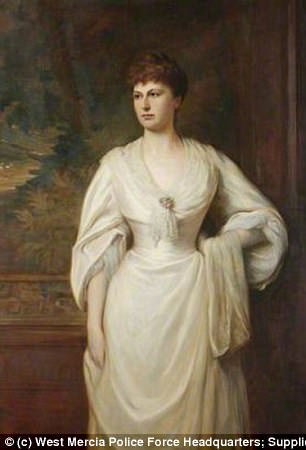 Lady Hindlip, Georgiana Millicent Palmer-Morewood, was the wife of Samuel Allsopp, the 2nd Baron Hindlip and heir to a brewing fortune

She is certainly not squeamish when it comes to her preparation techniques. She recommends cold young pork, for example, as being excellent for country-house breakfasts and advises: ‘Choose a small pig not over two months old. Cut it straight down the middle and right across, so as to make four pieces.

‘Salt it in strong salt and water for ten or 14 days, changing the water. Boil the quarters and serve cold. Tastes like chicken.’

She also made a potent cocktail. She includes the recipe for Prince Regent’s Punch which, she said, was always prepared for the Royal at the various houses he visited. She said the recipe was given by the steward of his residence, Carlton House, to her butler.