A kite surfer accidentally recorded a spectacular meteor bursting across the sky behind him but did not realise until after he posted the footage online.

Dorian Cieloch, from the German port city of Bremerhaven, was kite surfing in nearby Wremen in Lower Saxony.

Dorian, who owns his own kite-surfing shop, was recording a selfie video on a GoPro camera to test out products for his store.

The video begins facing out across the bay with his kite pulling him forward in the fierce wind.

Water can be heard splashing in the background as he skips over the waves.

He then turns the camera around so that his face is in the frame.

He begins to talk to the camera as he continues to grip the controls.

In the top right of the screen, a ball of light followed by a streak of glowing orange can be seen as the meteor descends in the background.

The meteor appears to split in two before one part of the space rock burns up and disappears.

Dorian Cieloch was kite surfing out on the water in nearby Wremen in Lower Saxony, Germany. He was filming a selfie video when a ball of light appeared in the background 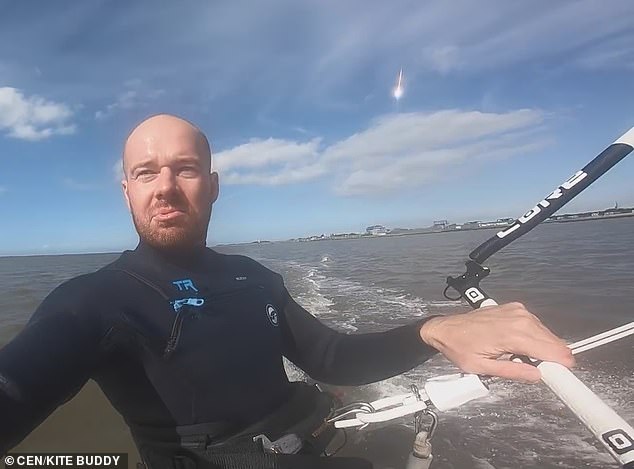 The other briefly continues before that too fades away, which is where the video ends.

The kite surfer said: ‘What’s really funny is that at exactly the right time, I had my camera pointed towards me and was filming what was behind me because I wanted to say something.’

He posted the footage on to his YouTube channel shortly after he returned home.

He said: ‘Only after I had uploaded it did I see people commenting about what I had filmed and I thought to myself “wow, that is really a massive coincidence”.’

Dorian said he was unaware of what had happened because he had not heard anything when the meteor entered the atmosphere. 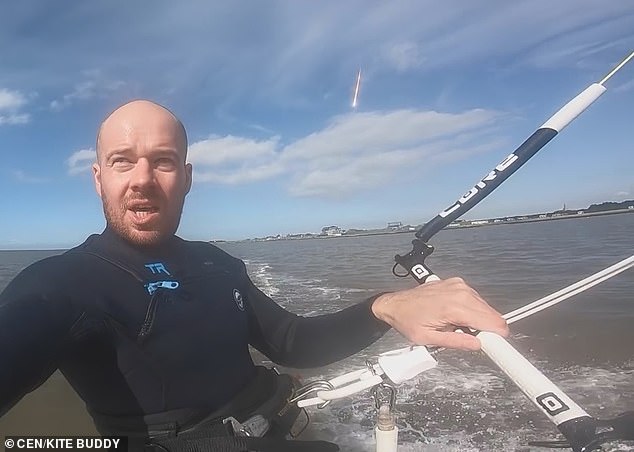 Dorian only discovered that he had filmed the phenomenon after reading the comments left on his YouTube channel. The American Meteor Society received nearly 500 reports of its sighting

In contrast, many other people not only saw it but also heard a loud bang.

The meteor was estimated to be roughly between three and nine feet (one and three metres) in diameter.

Meteors are generally assumed to be debris from other space rocks.

They become apparent when they enter the Earth’s atmosphere because of the incandescent glow that forms from the frictional heat they endure on entry and are therefore often referred to as shooting stars.

This meteor was visible just before 1pm local time on September 12.

It is possible some pieces of the meteor survived and ended up landing somewhere in the North Sea.

Rudiger Jehn, who is an analyst at the European space agency (ESA), confirmed the authenticity of the video.

He said the video would also be shared with colleagues at NASA and added: ‘It was a really lucky accident.’

He said it was possible that the burning object was space debris from a previous mission to space that was burning up upon re-entering the atmosphere.

But added: ‘I personally believe that it was actually an asteroid that entered our atmosphere and was seen burning up.’