Pedro Cuccovillo Vitola was among the customers who waited in a massive queue for two hours just to get a taste of the new flagship in Sydney CBD’s Mid City centre.

The radio producer of the Kyle and Jackie O show shared a TikTok video showing himself giving a tour around the store. 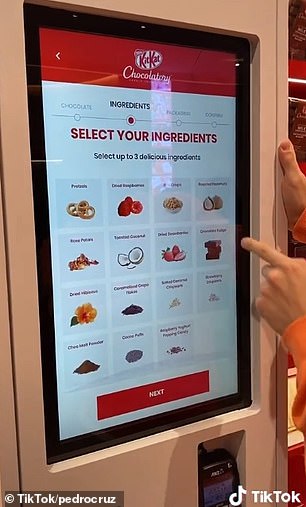 Pedro said he went straight to the ‘Create Your Break’ chocolate-making station where he designed his own eight-finger wafers with three ingredients of his choice.

‘I decided to go into the city and line up for two hours to get into the KitKat factory. Once I finally got in, I created my own KitKat with my own flavours,’ he said.

After placing his order, Pedro got to see his personalised KitKat being handcrafted by a chocolatier behind the counter.

‘Then we had to wait for the chocolate to set so we got a bit hungry and sat down by the KitKat sushi train… Oh my god I smashed it all down,’ he said.

‘Before we left, we looked around and saw there were heaps of KitKat from all over the world like Japan and Brazil so we bought a ton and left.’

The video has since been viewed more than 2.1 million times, with hundreds of people going wild over the new KitKat Chocolatory. 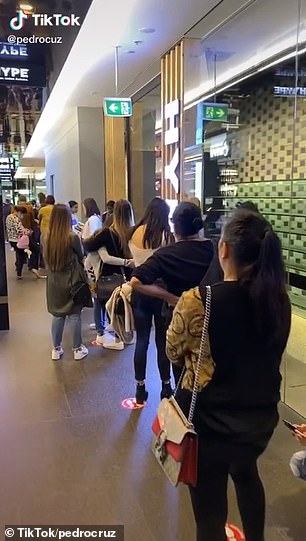 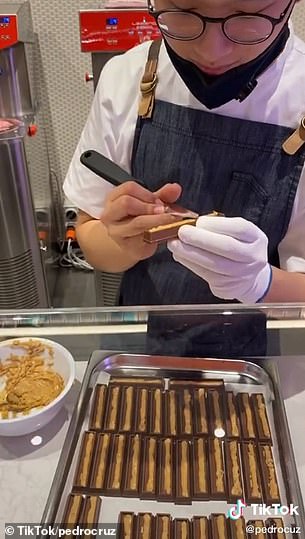 Pedro queued up in a massive line for two hours just to get a taste of the new flagship in Sydney CBD’s Mid City centre. Once he designed his own KitKat, he got to see a chocolatier (right) put it altogether in front of him 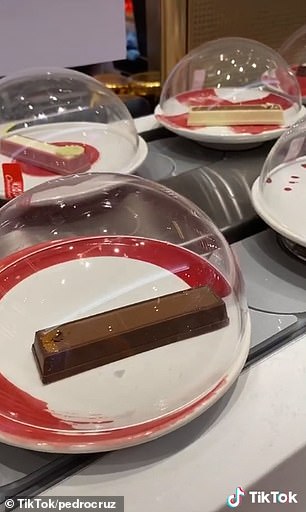 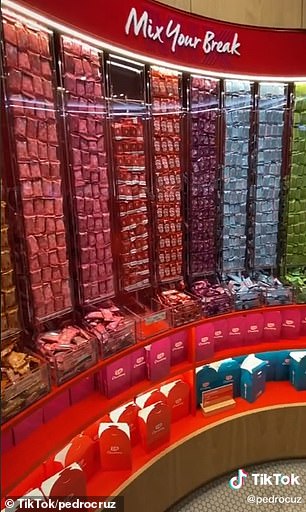 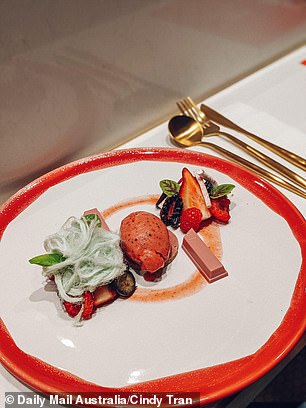 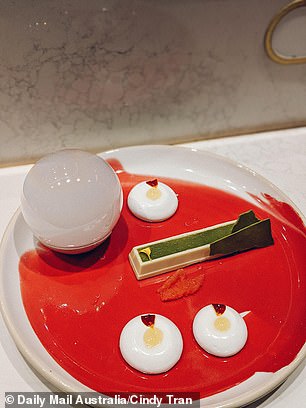 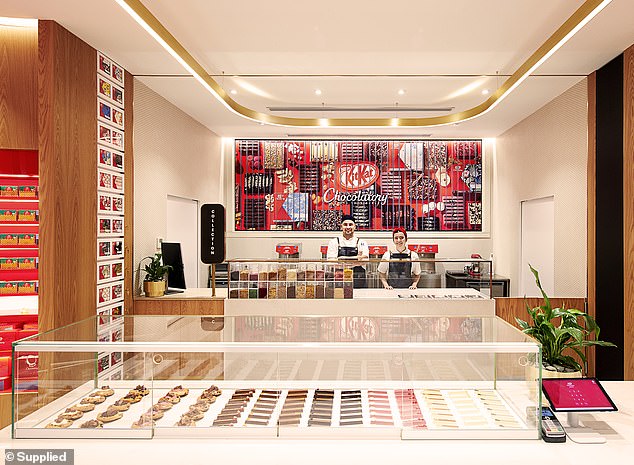 KitKat opened its first ever ‘Chocolatory’ boutique in Sydney on Monday, July 6 – complete with 30,000 flavour combinations, a tasting train, a chocolate-making station and a café

KitKat opened its first ever ‘Chocolatory’ boutique in Sydney on Monday, July 6 after its artisan chocolates proved successful in its Melbourne boutique.

The store has been so popular, a ticketed queuing system has been introduced allowing customers to return at a specific time to maintain social distancing.

Tickets are allocated in the boutique only on a first come, first serve basis.

The store features 30,000 flavour combinations to choose from.

Guests can also taste unique flavours such as yuzu ganache, peanut butter and raspberry and wasabi crème as they pass by on the ‘KitKat chocolate train’.

At the ‘tasting table’, shoppers can explore a carefully crafted selection of plated desserts offering the latest trends in chocolate – as reservations are available for up to 10 guests for a 90-minute seating.

Once the personalised KitKat are designed at the station, guests can either watch chocolatiers create their bar, or return to collect it. 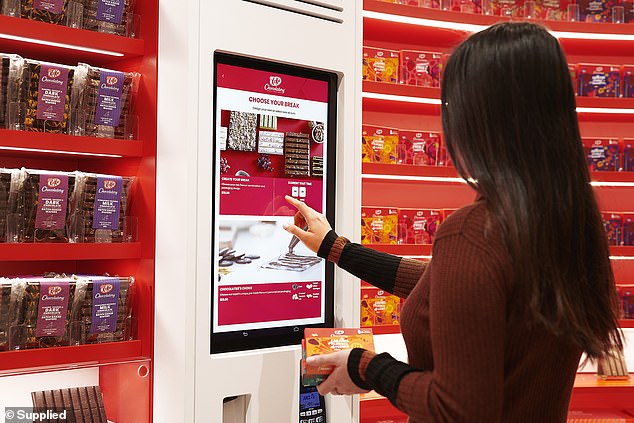 Offering a range of personalised, premium chocolates, customers can design their own eight-finger wafers from an array of gourmet ingredients at the ‘Create Your Break’ station 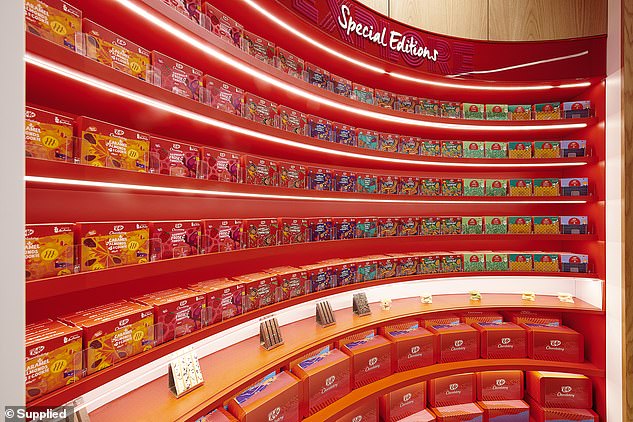 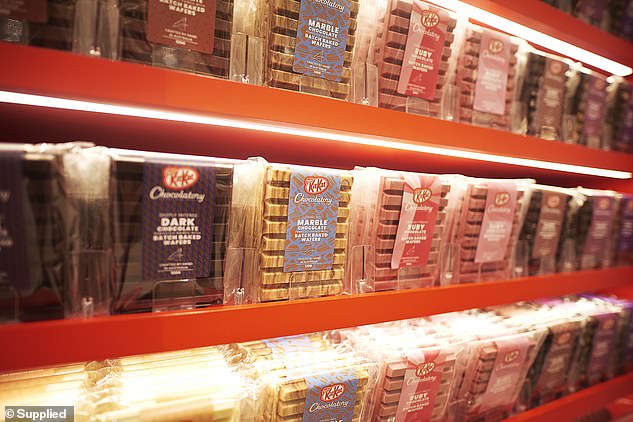 For those who want a variety of flavours, the boutique offers an exclusive ‘Mix Your Break’ range, including 12 individually wrapped creations, such as cotton candy, guava, churros, sake and matcha.

‘We have curated the very best of our boutiques, and I am now delighted to showcase the creativity that goes into premium chocolate-making here in Sydney.

‘A great deal of passion goes into the creation of every bar at the Chocolatory, and we look forward to greeting new guests as they discover a break like never before.’

The Sydney boutique joins other KitKat Chocolatories around the world, including Japan, Malaysia, UK, Canada and Brazil.

Customers will also be able to discover a taste of flavours from around the world including Australia’s lamington and Japan’s iconic matcha and Brazil’s exotic fruits.