Kmart Australia has delighted home cooks with the launch of its fancy cast iron pan that looks almost identical to a high-end French version costing upwards of $640.

Shoppers can create slow-cooked meals, simmering stews and casseroles in the meringue-coloured French pan with an enamel coated interior for just $35.

The budget version is lower in price than the world-famous French label Le Creuset, which is widely considered as one of the best cast iron brands on the market.

If you’ve had your eye on a French cast iron but have been reluctant to spend hundreds of dollars, the cheaper pan is a perfect alternative for those who are on a budget. 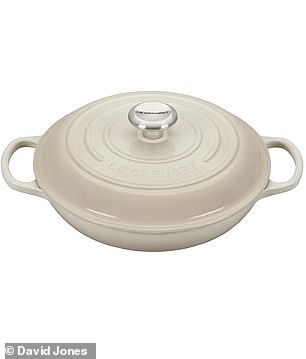 Kmart’s pan can be cooked on all types of heat source – including oven, electric, gas, and induction – just like popular brand Le Creuset.

The three-litre pan also features heat retention for perfect slow cooking, and it comes with a dimpled lid to lock in moisture, keeping food succulent.

Despite a huge $500 price difference, the budget buy performed ‘comparatively well’ when the experts put market-leading cast iron pots to the test.

‘Kmart’s cast iron casserole pot was up there with big-name brands such as Le Creuset, Chasseur and Staub when we tested casserole pots and Dutch ovens,’ the experts claimed.

The cheaper version scored a stellar 95 per cent in the bolognese sauce test.

‘We use this to assess the Dutch oven’s ability to slow cook while maintaining low temperature for a long period of time and its ability to brown meat evenly,’ they said. 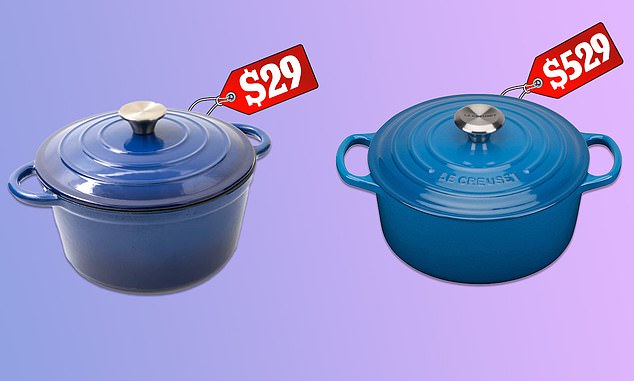 With a $29 price tag, Kmart’s cast iron casserole pot can be cooked on all types of heat sources just like world-famous brand Le Creuset.

The budget buy has an ‘exceptional heat retention’ that allows slow cooking and keeping foods moist and tender.

Other features include an enamel interior, easy cleaning and it’s safe to use in ovens, and all types of cooktops.

Choice’s kitchen expert Fiona Mair offered her review after giving her Kmart dutch oven a ‘good workout’ over the past five years.

‘I have noticed that after a year [it] did lose the smooth interior coating which helps to prevent sticking of food such as rice or pasta. If I’m cooking a soup or casserole I have to stir it constantly, even on a simmer, to ensure it doesn’t stick,’ she explained.

But despite the downside, she said the budget pots are cheap enough to replace every few years – and they are recyclable.

Shoppers have been raving about the budget pot online, with one saying: ‘I’ve used it nearly every day. For deep frying, pan frying, stews and even cooked a lovely risotto. Totally worth every cent. And so cheap.’

A second shopper added: ‘Beautiful colour. Looks great in the kitchen. It’s a little heavy, but it can also be used in the oven and suitable for gas. I’m very happy to purchase what I was looking for at such a reasonable price.’ 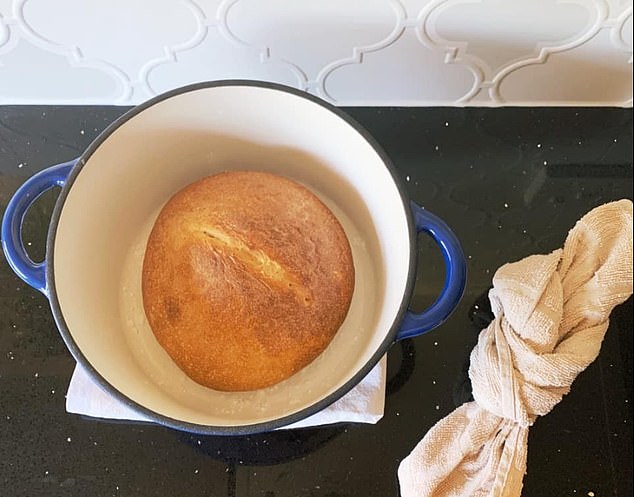 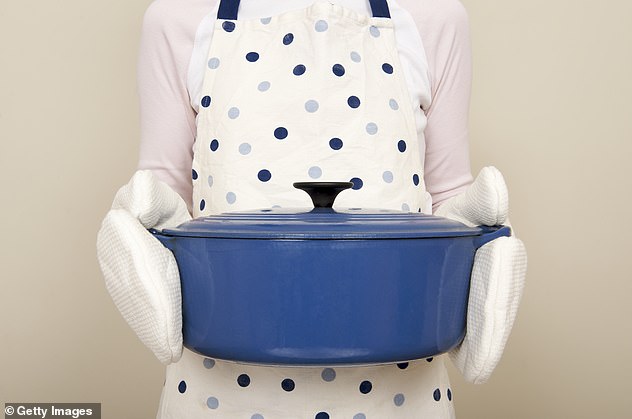 After an ‘unfortunate accident’, one home cook decided to buy the Kmart version after her Le Creuset cast iron casserole pot was thrown out.

‘I was pretty skeptical when I saw this $29 Kmart dupe, but it cooks wonderfully. Today I made an incredibly fluffy and crusty sourdough. For five percent the price of the Le Creuset, it’s a worthwhile investment,’ she said.

And another person wrote: ‘Bought this beautiful cast iron pot to make sourdough bread with outstanding results but have also used it for casseroles. It’s an asset in the kitchen – producing great results, is easy to clean and a lovely colour and shape.’

One shopper weighed in after owning both Kmart and Le Creuset pots.

‘Both get used frequently, both hand-washed. The cheap Kmart one was chipped around the base, lid and rim within a few uses. It does the job but it’s nowhere near the same quality as a Le Creuset – it’s still perfect after 12 years.’

And if money is no object, the consumer experts explained why the Le Creuset or casserole dish is worth investing in.

‘A high-end dutch oven can last you 20 years or more before it shows signs of wear and tear, even becoming a family heirloom,’ they said.

‘Products from brands such as Le Creuset usually come with lifetime guarantees, so you can always replace if you have issues.’