There’s nothing more irritating than craving a particular breakfast meal but then not having the correct tools to make it with.

That’s what happened to one mother who figured out how to make the perfect fried eggs without a frying pan.

Her little trick involved using a sandwich maker, retailed at just $7.50 from Kmart – and just three minutes to cook her meal.

Since sharing her clever idea on a Kmart parenting Facebook page, the mother has been praised for her perfectly cooked eggs.

One mother’s trick for making fried eggs involved using a $7.50 Kmart sandwich maker , and she shared her idea on a Kmart parenting Facebook page

‘Felt like eggs this morning but forgot I need a new fry pan,’ she said.

‘Our sandwich maker was sitting on the bench, so thought I’d try cooking eggs in it and hey presto, three minutes later, perfectly cooked eggs.

‘They go perfectly on the toast too. I’ll be doing this again.’

The mother’s post in the group garnered nearly 2,000 likes in just 24 hours, as well as comments from others praising her hack and sharing their own. 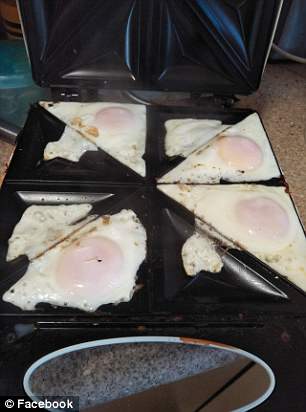 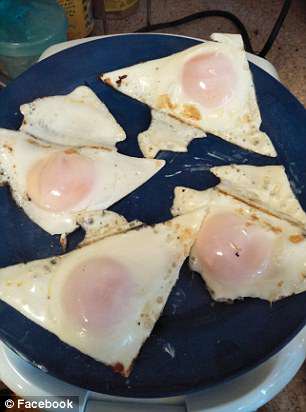 ‘Our sandwich maker was sitting on the bench, so thought I’d try cooking eggs in it and hey presto, three minutes later, perfectly cooked eggs,’ the woman said

A variety of people commenting asked her exactly how she did it so they could do it themselves at home.

She told the eager commenters that she simply cracked the eggs into the sandwich maker and closed it for three minutes, until they looked like they were done.

Then she used her $2 spatula, also from Kmart, to scoop them out and placed them on toast cut into a similar shaped triangle.

People couldn’t help but tell her how ‘brilliant’ the trick was and that they were going to try it out themselves.

This sandwich maker has proven that it isn’t only perfect for sandwiches and eggs, as people shared other foods they have managed to make using it.

The meals have varied from crispy bacon, egg with toast, pancakes and even muffins.