Missing Obi is a big thing’: Knicks star RJ Barrett laments loss of Toppin after he suffered leg fracture in win over Hawks: ‘He’s such a ball of energy, man – when he’s out there we play so much better’

Obi Toppin was ruled out for two-to-three weeks by the Knicks on Thursday, and his absence is being viewed as a significant blow by his teammates.

Toppin, in his third year, is averaging 7.7 points and 3.8 rebounds per night in a reserve forward role.

But Toppin suffered a non-displaced fracture to his right fibula head vs. the Hawks on Wednesday, and will now be out of action until the latter stages of the month judging by the Knicks’ timeline.

‘Missing Obi is a big thing,’ RJ Barrett said after shootaround ahead of Friday’s night’s game against the Hornets. ‘He’s such a ball of energy, man, going out there. When he’s out there we just play faster. We play so much better.’

‘That’s a guy, his energy and spirit, you always know he’s going to have a smile on his face,’ Barrett said. ‘He’s going to bring positive energy. So that’s going to be missed for sure.’ 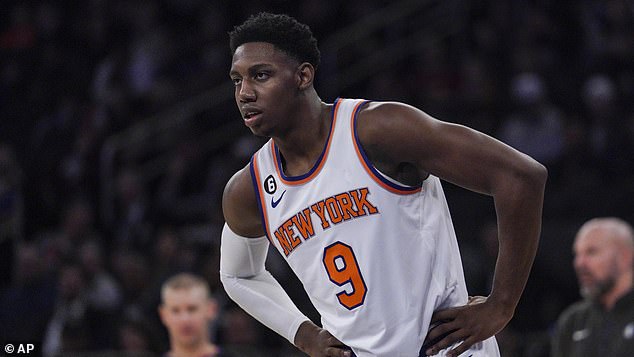 Toppin has averaged 17.1 minutes per night this season for a Knicks team which is 12-13 and ninth in the Eastern Conference.

Toppin’s absence could mean extended minutes for Cam Reddish, who was recently removed from the rotation and found himself the subject of trade speculation.

The Knicks could also choose to play small and use RJ Barrett at the power forward position amid his shooting struggles.