By Cheryl Goodenough For Aap

A knife-wielding man who fooled experts with a fake bomb he pulled from a suitcase after chasing his estranged wife through the Brisbane Airport has successfully appealed his sentence.

Gamal Elsaied Elboushi was handed a head sentence of six years behind bars after pleading guilty to charges relating to the 2019 incident during which he wore spiked armbands he claimed were tipped with snake venom.

The now-53-year-old will be immediately be eligible for parole after his successful bid to the Queensland Court of Appeal on Monday resulted in his sentence being reduced to five years.

Gamal Elsaied Elboushi (pictured), 53, has successfully appealed his sentence after pulling a fake explosive device from his suitcase in Brisbane Airport in 2019

The sentencing judge erred by mistaking the offence to which Elboushi pleaded guilty, while also imposing an excessive sentence, barrister Susan Hedge, acting pro bono, told the court on Monday.

Ms Hedge argued the judge also did not sufficiently take into account that Elboushi suffered from a major depressive illness which reduced his culpability.

Elboushi chased his estranged wife through the airport on February 2 before threatening to stab himself to death, telling police he was happy to die that day.

The award-winning cinematographer had smuggled a knife and fake bomb into the airport inside a suitcase.

He had a gas mask and wore wristbands into which he had inserted needles – poking outwards – and warned police they contained snake venom. 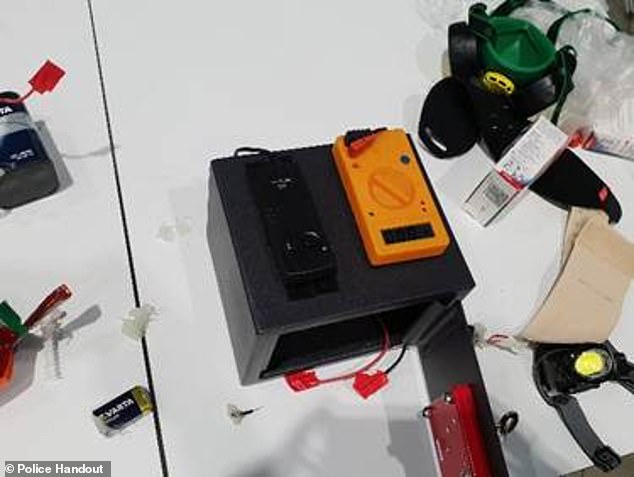 The man was handed a head sentence of six years after pleading guilty to the incident in which he wielded a knife, chasing his wife before pulling the hoax device out (pictured)

His actions led to the airport being evacuated for more than three hours and its operations disrupted, with some people trapped behind Elboushi in the international terminal’s food court for some time.

He said people who had served in armed forces thought it was a bomb and disposal experts concluded from photographs that it was real.

Elboushi’s actions prompted a mass panic, with people fleeing the food court, the Brisbane District Court was told during the earlier proceedings.

He surrendered peacefully to police after about 90 minutes, although it was another two hours before airport operations returned to normal. 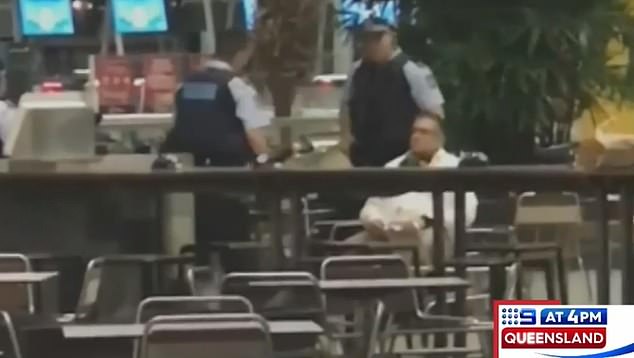 But after his appeal, the man who forced authorities to evacuate the airport could walk free (pictured, Gamal Elsaied Elboushi with police)

During that time, 16 departing and arriving aircraft were delayed, costing the airport more than $1 million.

Elboushi moved from Egypt to Australia in 2011, but could only get work as a security officer despite having accolades and awards for his work in the film industry, the District Court had been told.

He was due to be eligible for parole after serving three years, but that has been reduced to two-and-a-half years, with the appeal court judges due to publish their reasons at a later date.

Elboushi has been in custody since his arrest on the day of the incident.