A bungling burglar ran away from the house he tried to break into when a sword was jabbed through the letterbox towards him.

CCTV footage captured the moment the burglar was faced with a sword, possibly a scimitar, but decided to continue trying to kick the door down, only backing away after he destroyed the door and the full size of the sword was revealed.

The burglar tried to gain entry to the house in Idle, an upmarket Bradford suburb, on Tuesday at 5.25pm.

But the man, wearing a black hoodie and a white mask, could not open any windows and, taking out a knife, began chipping at the door’s lock before trying to kick it down.

Suddenly the burglar stepped back in disbelief as a sword was jabbed through the letterbox.

Deciding to ignore the sword he continued to kick at the door, even stepping away from it before running up to kick with force.

But after the sword was jabbed more forcefully through the door the burglar panicked and ran away. 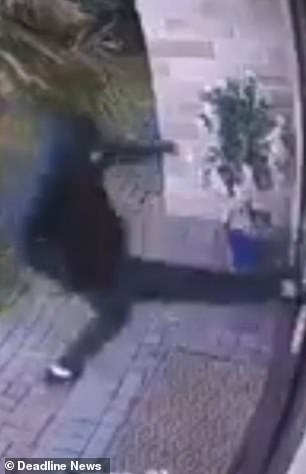 The man, wearing a black hoodie and a white mask, could not open any windows and, taking out a knife, began chipping at the door’s lock before trying to kick it down

He jumped on the back of his friend’s motorcycle and the pair sped away.

The shocking video is just another attack in a spate of brazen criminal behaviour to hit what has been dubbed Wild West Britain.

There are now more than 100 knife crimes a day in the UK, according to figures by the Office of National Statistics.

Killings rose by 14 per cent to 739 last year, an increase of 90 more homicides recorded in England and Wales than in the previous 12 months. 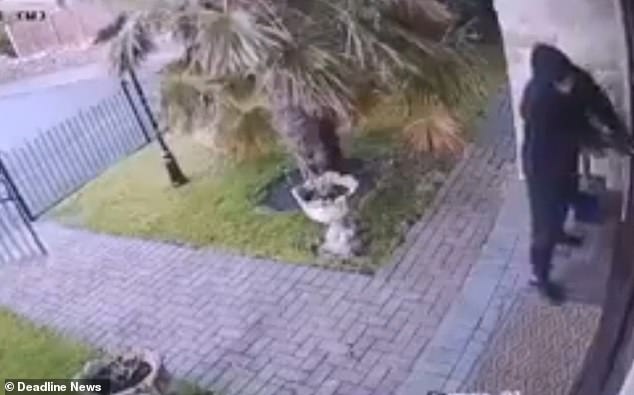 The burglar tried to break in to the house in Idle, an upmarket Bradford suburb, on Tuesday at 5.25pm

And a haul of 24 firearms were seized by police in just over a month between December 15 and January 27 as gun crime becomes increasingly common in the UK.

In one instance, 60 patients and staff at a GP surgery were embroiled in a terrifying gun incident when a patient took a Beretta pistol and a magazine of blank ammunition into an appointment. Astonishingly, the GP kept calm and left the room when the patient took out his gun.

The 24 guns, which were seized, confiscated or handed in to forces between December 15 and January 27, were not confined to London. West Midlands Police seized three guns – a loaded pistol, shotgun and handgun – in as many days in January.

After the video was posted on Facebook comments slammed the burglar’s brazen attempt to get into a house in daylight and while the occupants were home.

Danny Smithy said: ‘Should of stuck the sword through the letter box just as he was coming to kick the door.’

Adi Holt added: ‘Shame he didn’t get him with the sword in the belly.’

A spokeswoman for West Yorkshire Police said: ‘Police have arrested two males in connection with an attempted burglary in Idle this week.

‘The incident happened on Tuesday 12 March at around 17:20 at an address on Lyndean Gardens in Bradford.

‘Three males wearing masks approached the property and tried to force entry to the front door.

‘They were unable to enter the premises and fled the scene.

‘Two males, aged 17 and 21, from Leeds, were arrested in connection with the incident.

‘Enquiries remain ongoing. Anyone with any information is asked to contact the police via 101 quoting crime reference number 13190131022.’

Posing as police officers, this is the shocking moment a group of burglars force their way into a home before carrying out a vicious raid on the occupants.

In horrific video footage released by the Metropolitan Police today, a gang of four men can be seen preparing for the raid which took place in Edgware, north London on August 10 last year.

And at 7.20pm they burst into the property shouting ‘police’ as they enter before threatening the victims inside with weapons. 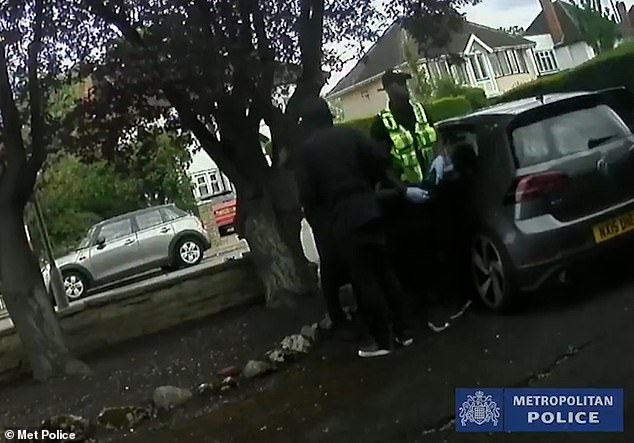 The four men approach the property, one clearly visible in a high-vis jacket, before smashing their way in and threatening the occupants with weapons 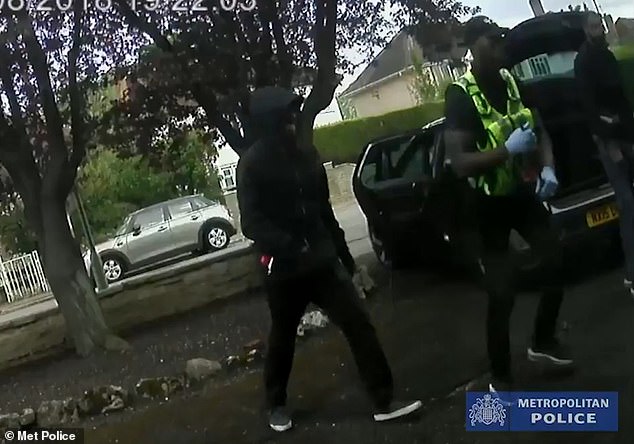 Dressed as police officers, shock video footage released by the Metropolitan Police today shows the gang of four men exiting their vehicle prior to the raid

Soon after they enter another victim approaches the property before he is sprayed in the face with an unknown substance, according to the force.

The burglars then punch and kick the man before he is taken upstairs and put with the other victims.

They then carry out an untidy search of the premises before fleeing in the same vehicle they arrived in.

It is just yet another example of brazen criminal behaviour gripping the capital, as the spate of violence continues in Wild West Britain.

A spokesman for the Metropolitan Police said: ‘The second victim was taken to a north London hospital by the London Ambulance Service. His injuries were not life-threatening.

‘The suspects are described as black males who were wearing dark clothing. One of the suspects was wearing a hi-vis jacket.

‘No arrests have been made. Enquiries continue’. 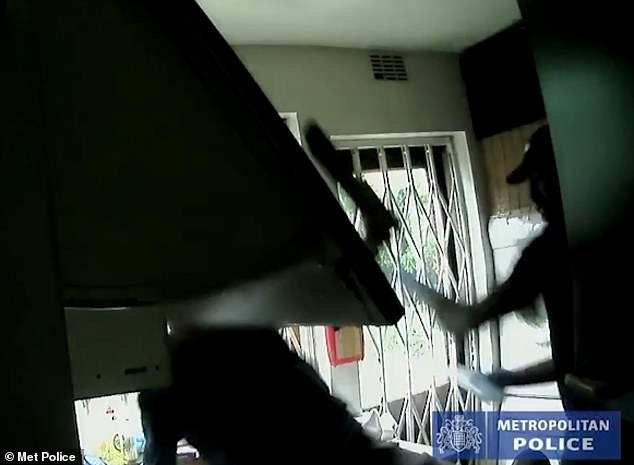 A scuffle ensues as the burglars enter the property. They drag one of the occupants away before searching the home for valuables

The Metropolitan Police today released video footage of the shock incident in the hopes it will encourage people with information to come forward.

The footage shows both the moment the burglars enter the property, and the moment they tackle one of the occupants to the ground.

If you can help the police you are asked to call 101 quoting crime reference number 6449/10AUG.

Knife crime in the capital continues to rocket, with the number of criminals caught with knives at its highest level in a decade. 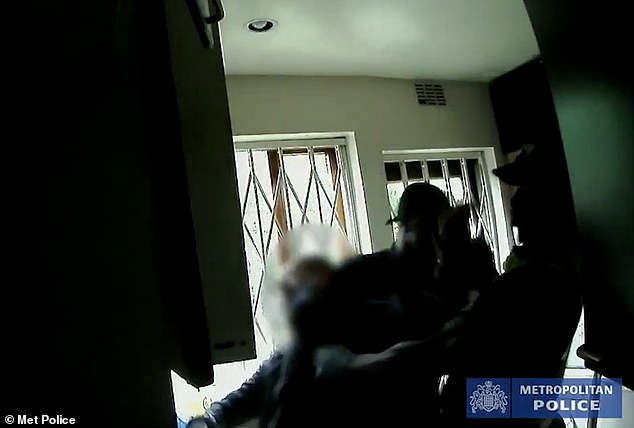 One of the victims was taken to hospital following the incident (pictured). His injuries were not life-threatening

One in five of the culprits were found to be a child and almost two-thirds of cases did not result in an immediate prison term.

That’s according to figures released by police, with the government now insisting offenders are now more likely to go to jail for knife or offensive weapons crimes.

Just yesterday a day after a 17-year-old boy was stabbed outside Leyton tube station, east London and is now fighting for his life.

With twenty people – including Jaden Moodie, who was just 14 – murdered in London in the first three months of 2019.