A suspected Islamist terrorist today knifed five people on a packed commuter train before he was outmuscled by a 60-year-old off-duty policeman.

The Iraq-born suspect, 31, was disarmed and arrested after 7.40am today in Herzogenrath, a suburb of Aachen, western Germany.

He was pulled off the train by police after the ‘indiscriminate and arbitrary’ attack and put in a body suit to protect the crime scene and his identity, cops said.

The hero cop, who worked with two fellow passengers to stop the attack, told BILD: ‘I was on my way to work, that’s all I can say.’

A police spokesman told the newspaper: ‘He was taken away without leaving any traces in order to secure evidence and traces, for example on his outer clothing.’

The alleged perpetrator suffered injuries while being disarmed and was taken to hospital.

Three victims are also being treated in hospital with injuries.

None are thought to be life-threatening. 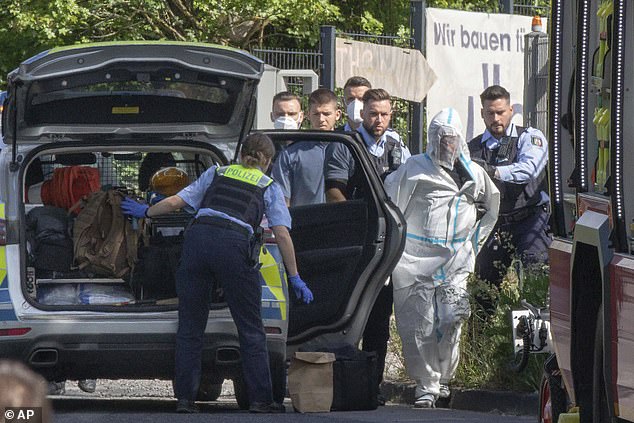 The stabbing suspect arrived in Germany as an asylum seeker.

He was reported by his refugee home as a possible extremist ‘test case’ five years ago, according to Mr Reul. 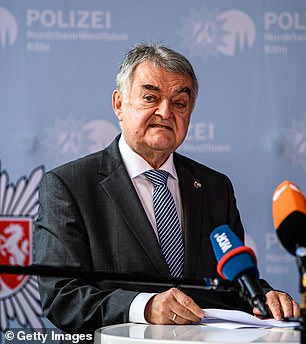 The minister added: ‘According to everything we know so far, we have to assume that this act was a [terrorist] act.’

Cologne Police Department added: ‘The police are on site with strong forces and have, among other things, taken over the care of the witnesses present on the train.

‘The Cologne Criminal Police Department has started investigating the identity of the attacker and the background to the crime. The railway line near Herzogenrath is currently closed.’

At 4.30pm this afternoon, the force confirmed trains in the area were back up and running.

It’s not known what motivated the suspect’s attack nor to which country he holds citizenship.