Parr broke his silence on the matter on Tuesday morning and confirmed the incident from a Newcastle pub on Saturday night is being investigated by the NRL Integrity Unit.

He stressed it was important the club allow the process to be completed before handing down any potential punishments to the two players. 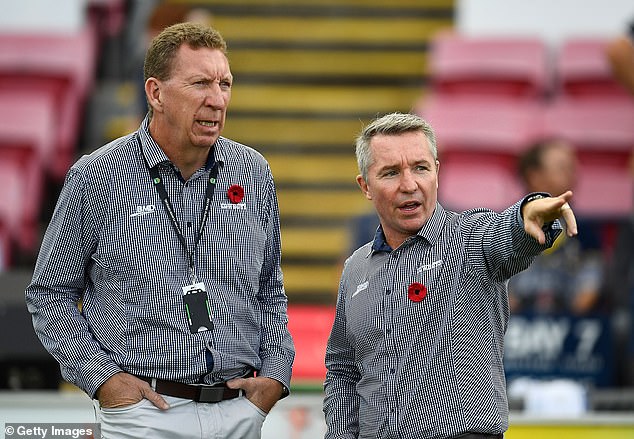 Ponga is the club’s co-captain and comfortably their highest-paid player.

‘It is not a good look, but all the facts are not established,’ Parr said.

‘We will co-operate with the NRL Integrity Unit and let the process run its course.’

In a further example of the club’s poor culture, Bradman Best and Enari Tuala have been dropped to NSW Cup this weekend.

The pair were late to the team bus on Sunday morning after they were trounced 28-10 by the Brisbane Broncos at Suncorp Stadium on Saturday.

‘They weren’t late by a long-period of time,’ Parr said. ‘But they didn’t meet the standards necessary.’

Parr is also expected to read the riot act to the entire NRL squad following revelations some players are turning up to training late and not wearing club gear at all times.

Ponga purchased a home in the Newcastle suburb of Merewether on Saturday afternoon after bidding $2.4million at auction.

According to News Corp, Ponga will face some intense questioning from the Knights board, after he was reportedly ‘drinking himself into a stupor’ at the watering hole.

It isn’t a good look – especially in public – with the Knights battling to avoid the wooden spoon and Ponga only racking up 14 appearances this season.