Somewhat improbably, this is a film that brings together two of the biggest franchises in the film-making world: Star Wars, in the shape of Rian Johnson, who wrote and directed The Last Jedi and performs the same dual role here; and James Bond, with Daniel Craig taking time off from being 007 to play a Tennessee private detective and show off his Deep South US accent.

So let me say right from the start that what ensues is even odder on the big screen than it sounds on paper. We quickly discover we have landed not on the Death Star, nor in another of Blofeld’s secret lairs, but in the sort of country-house murder-mystery Agatha Christie would have recognised in a strychnine-poisoned heartbeat.

And even she might have thought it was a bit OTT. 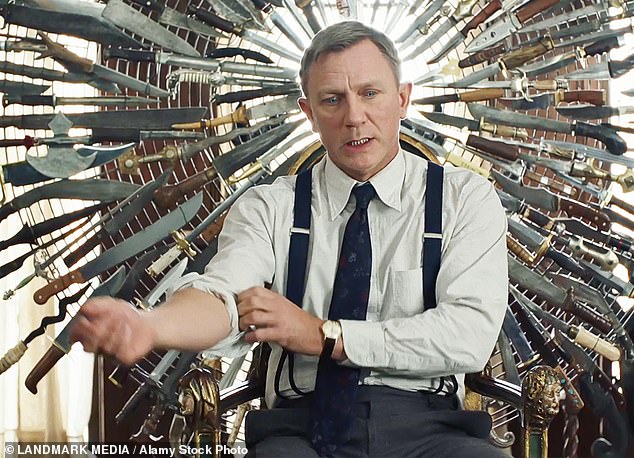 Harlan Thrombey, played here in several layers of inevitable flashback by Christopher Plummer, is dead: we know that almost from the start. We go on to learn that he’s been murdered – on the chaise longue in his study, with a dagger.

‘Heck, the guy practically lived on a Cluedo board,’ notes the young state trooper as he gazes in awe at the large Gothic pile that the extended and highly dysfunctional Thrombey family have hitherto called home.

It’s lines like this – together with discoveries such as Harlan being a writer of murder-mysteries himself, and that all the family members will be interviewed in front of a huge dagger sculpture – that provide the first clues as to the film’s rich, fruity and theatrically wordy tone. 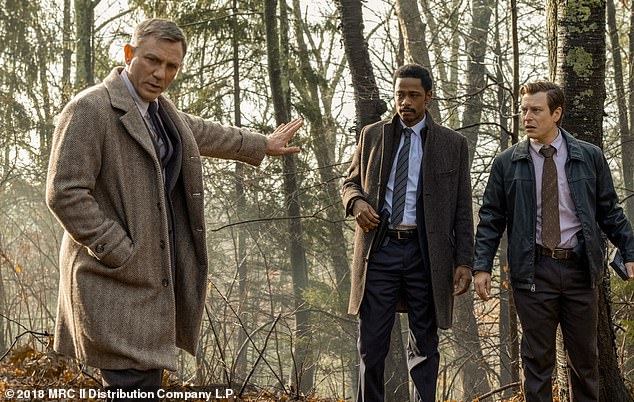 It’s one part homage, one part pastiche, one part Poirot … only this time with that Deep South accent (Craig as Benoit Blanc with LaKeith Stanfield and Noah Segan)

If Johnson’s first big success, the extraordinarily good Looper, was all about the cleverness of its outlandish central idea (a hitman being sent back in time to kill himself), this occupies more familiar ground.

It’s one part homage, one part pastiche, one part Poirot… only this time with that Deep South accent. ‘What is this? CSI: KFC?’ asks one of the many suspects, mocking detective Benoit Blanc’s lazily drawled vowels, as delivered by Craig, who last displayed his perfectly decent, but always distracting, southern accent skills in Steven Soderbergh’s not very funny 2017 crime caper Logan Lucky.

It’s one of the few laugh-out- loud moments in a film that, while always likeable and easy watching, is never quite as clever or as funny as it thinks. 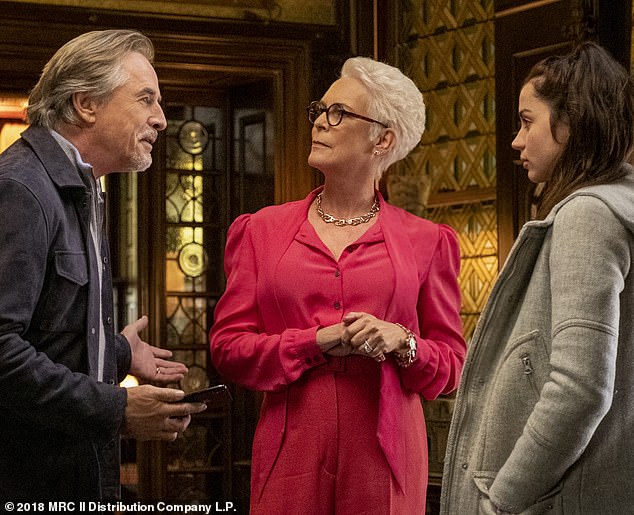 Could it be Harlan Thrombey’s steely eldest daughter (Jamie Lee Curtis), or her creepily lascivious husband (Don Johnson)? Then there’s his nurse (Ana de Armas, all pictured above)

British audiences – maybe more than their US counterparts – are very, very familiar with this sort of highly mannered drama. Think Michael Caine in Sleuth and you’ll get rather more than the general Murder, She Wrote idea.

Benoit is a private detective of such renown that the local police are happy to play second fiddle, in much the same way as poor Inspector Japp trails in the wake of the great Poirot.

The complication here is that Benoit doesn’t know who has employed him. 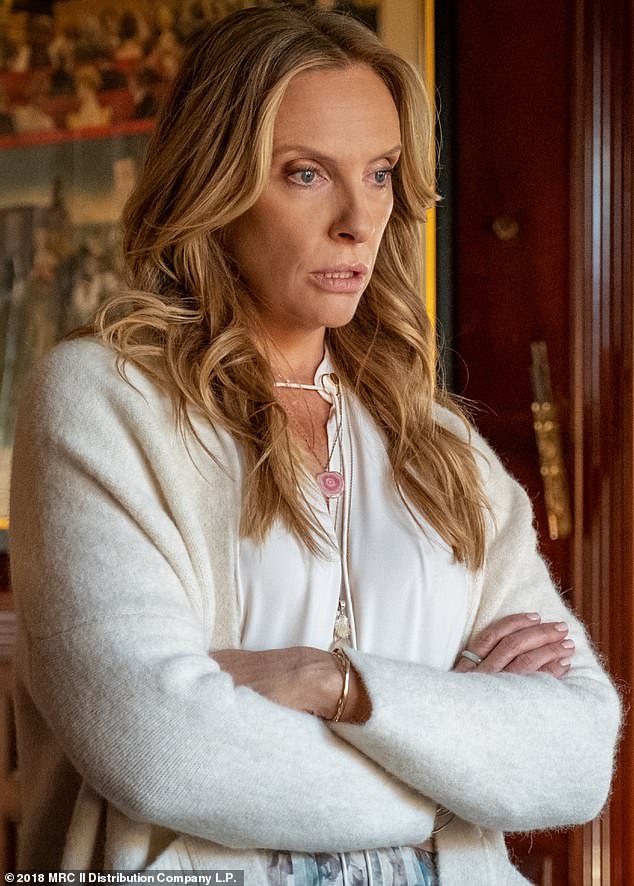 The list of who might have dunnit really does go on and on… Could it be the widowed daughter-in-law (Toni Collette) with the school fees to pay?

Which brings us to the suspects, who, in time-honoured genre tradition, turn out to be virtually everyone, given the suggestions of furious jealousy, quiet blackmail, incipient poverty and straightforward greed that are soon flying around.

Could it be Harlan’s steely eldest daughter (Jamie Lee Curtis), or her creepily lascivious husband (Don Johnson)? Or the son (Michael Shannon), who runs his father’s publishing company, or the widowed daughter-in-law (Toni Collette) with the school fees to pay?

Muppets co-creator Frank Oz (the voice of Miss Piggy and Yoda) features in Knives Out, his first role in 20 years that is not a voiceover.

Then there’s his nurse (Ana de Armas), housekeeper, assorted grandchildren… The list of who might have dunnit really does go on and on.

And eventually it goes on too far, with director Johnson tying himself up in convoluted plot twists and landing himself with an unhelpful running time of more than two hours, and finally plumping for an explanation that doesn’t ring true on at least two levels, maybe more

Craig, not a natural light comedian, is decent enough, and the classy Shannon is always watchable too. But while Knives Out passes an evening gently amusingly, if you can still remember whodunnit – let alone care – by the time you get home, I’ll be very surprised.

Not one for ‘ze leetle grey cells’ after all.

Ever since the Twilight franchise ended, Kristen Stewart has been establishing herself as the darling of art-house cinema. So it’s strange to see her gracing this flagrantly commercial reboot of the old Seventies TV series.

One can only assume she was paid a lot of money.

Alas, her undeniably kick-ass presence has not been enough to stop the film – written and directed by Elizabeth Banks – from tanking at the US box office, where audiences appear to have been unimpressed by Stewart’s British co-stars, Naomi Scott and Ella Balinska. 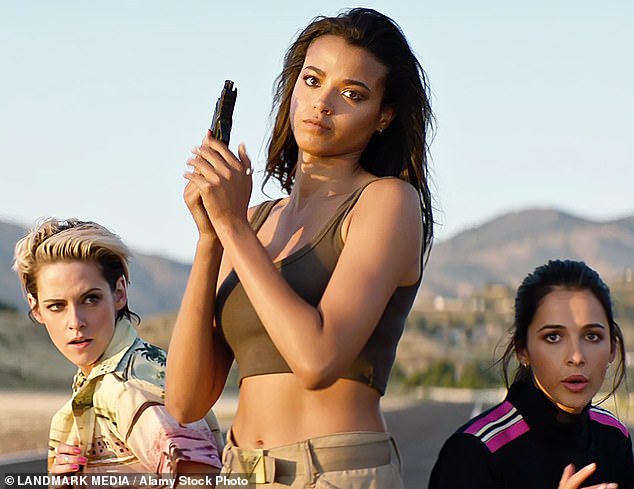 Charlie’s Angels tanked at the US box office, where audiences appear to have been unimpressed by Kristen Stewart’s British co-stars, Naomi Scott and Ella Balinska

It’s certainly not an out-and-out disaster, with the action racing enjoyably enough through Hamburg, Paris, Los Angeles and Istanbul, as a new trio of angels, accompanied by a new Bosley (Banks), pursue a corporate baddie who’s trying to sell an energy-producing device that can be weaponised.

Banks’s screenplay could have done with a final comic polish but it does have one or two good moments.

Anyone expecting Jude Law swanning around in his swimming trunks is going to be disappointed – that’s Paolo Sorrentino’s TV series The Young Pope. This is two old blokes sitting around discussing the many problems facing the modern Catholic Church, and it’s absolutely fabulous, with nomination-grabbingly good performances from Jonathan Pryce and Anthony Hopkins.

Assembled beautifully by the Brazilian film-maker Fernando Meirelles (both cinematography and editing are outstanding), and with a deliciously crafted screenplay from Darkest Hour writer Anthony McCarten, it’s marred only by the over-delayed revelation of Bergoglio’s involvement in the military coup of 1976 which, in terms of narrative, feels a bit of a cheat.

Five years ago, Australian actress turned film-maker Jennifer Kent made a stunning debut with frightener The Babadook. Her follow-up is very different, being set in the harsh Tasmanian outback of the early 19th century and having brutal British imperialism firmly in its uncompromising sights.

With Sam Claflin playing a sadistic British lieutenant and Aisling Franciosi as Clare, the married Irish former convict he sexually abuses, the dramatic content – rape, murder and infanticide within the first 20 minutes – is offputting enough to deter commercial audiences.