A koala and her joey who were pictured huddled together during a raging bushfire in south-east Queensland are set to be released back into the wild.

Mother koala Ainslee was found cradling her joey Rupert as out-of-control blazes destroyed their habitat in Canungra in September.

The nine-year-old mother was found sitting on a fallen tree, with Rupert sheltered underneath her as firefighters battled the surrounding blaze.

Ainslee and Rupert were rescued and taken to RSPCA Queensland, with Ainslee’s motherly protection leaving Rupert only suffering from smoke inhalation in the fires.

She suffered burnt paws and had singed hair all over her body, but after treatment from carers, the pair are ready to be released back into their habitat.

Carer Sam Longman told the ABC Ainslee was very protective of her joey.

‘If he gets himself into a pickle and starts to yip, which is the koala equivalent of crying, she becomes quite alert and responsive,’ Ms Longman said.

Ainslee’s health was rated when she arrived at the RSPCA, and she has been given multivitamins and supplements throughout her stay to help with her healing.

Her paws have healed well, and her fur has started growing back. 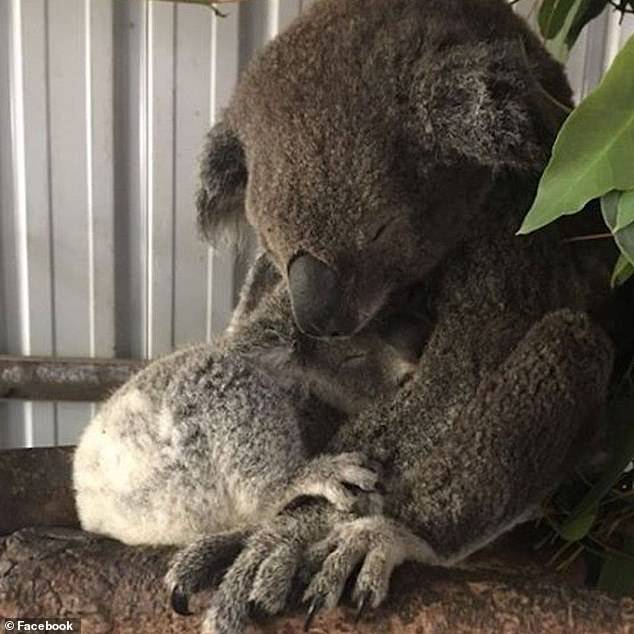 Ainslee and Rupert cuddle to sleep in the pen most nights

Rupert has come out of his shell and become the larrikin of the koala pen, with the one-year-old often playing with other joeys, but still cuddles to sleep with his mother most nights.

A joey will normally leave their mother at 18 months.

The law requires koalas to be returned to within five kilometres from where they were rescued.

Ms Longman is worried for what the koalas will find on returning to their habitat after the fires.

‘I think it’s fantastic they will be released but scary at the same time. Where they came from, there’s nothing left, she said. 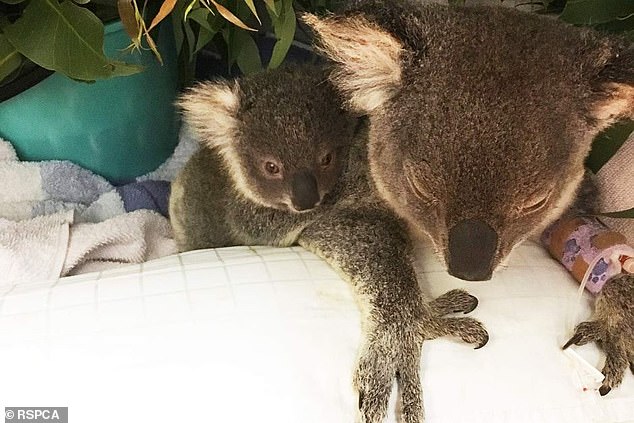 The law requires koalas to be returned to within 5 kilometres from where they were rescued, but carers are worried for what the koalas will find on returning to their habitat after the fires