Kobe Bryant’s touching comment about being a ‘girl dad’ has inspired fathers to pay tribute to the late basketball legend by celebrating their relationships with their daughters.

As many around the world continue to mourn the loss of Bryant and his 13-year-year-old daughter, Gianna, men are taking to social media to share photos of themselves with their own little girls using the hashtag ‘#GirlDad.’

The viral trend was inspired by ESPN anchor Elle Duncan’s moving story about how proud Bryant was to be a father to his daughters.

Tribute: Fathers are taking to social media to share photos of themselves with their daughters using the hashtag ‘#girldad’ in honor of Kobe Bryant and his 13-year-old daughter, Gianna 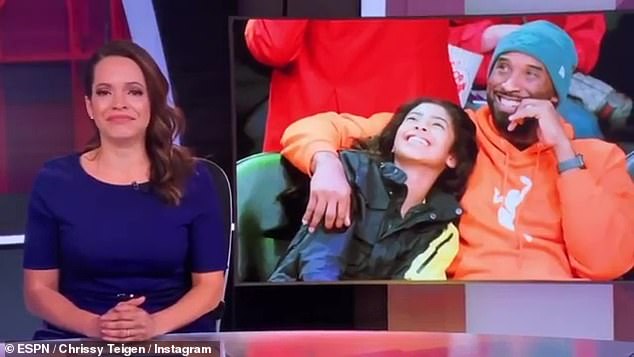 Start of it all: The viral trend was inspired by ESPN anchor Elle Duncan’s moving story about Bryant proudly saying he is a ‘girl dad’

‘I didn’t get it for a few minutes, because, as I approached him, he immediately commented on my rather large eight-month pregnant belly. “How are you? How close are you? What are you having?” “A girl,” I said, and he then high-fived me. “Girls are the best.”‘

The NBA superstar had three daughters at the time — which was years before his fourth, Capri, was born — so, naturally, Duncan asked his advice on raising girls. 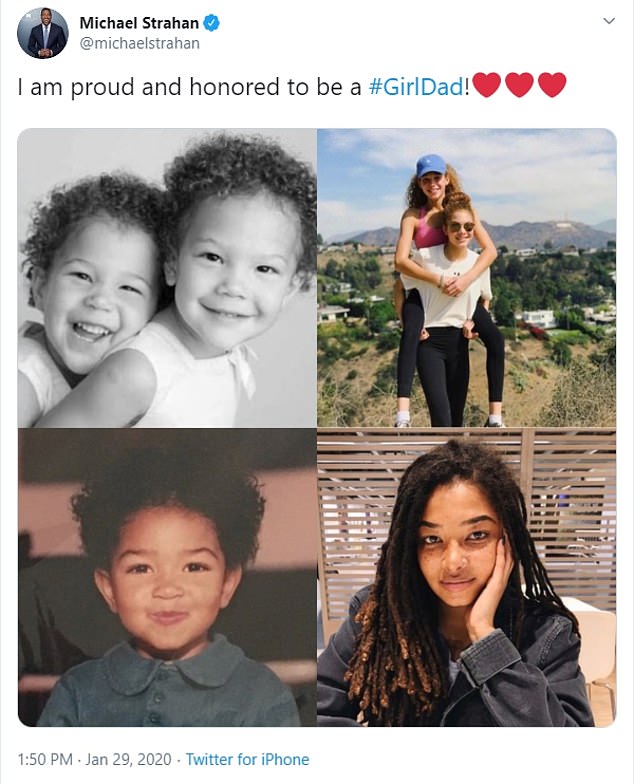 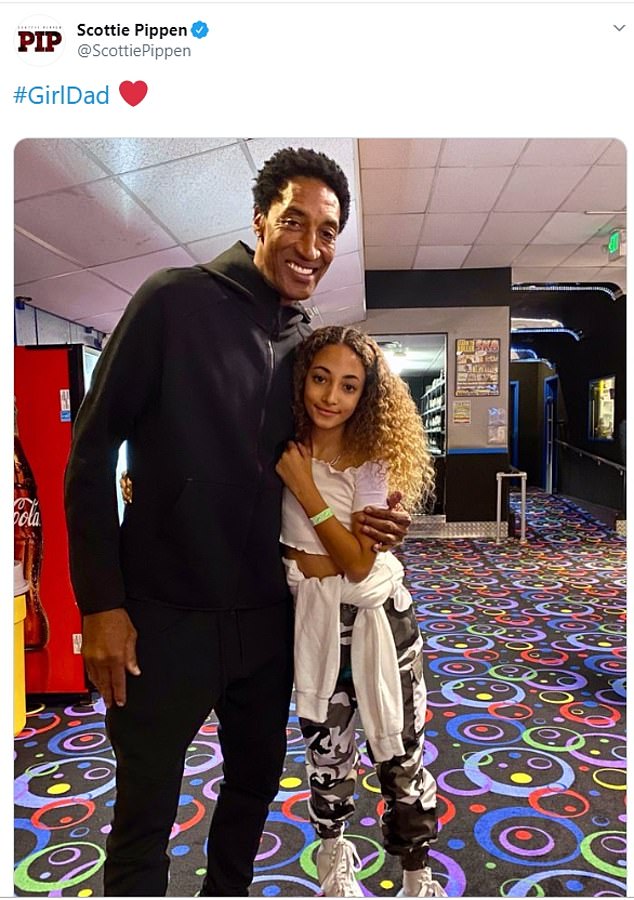 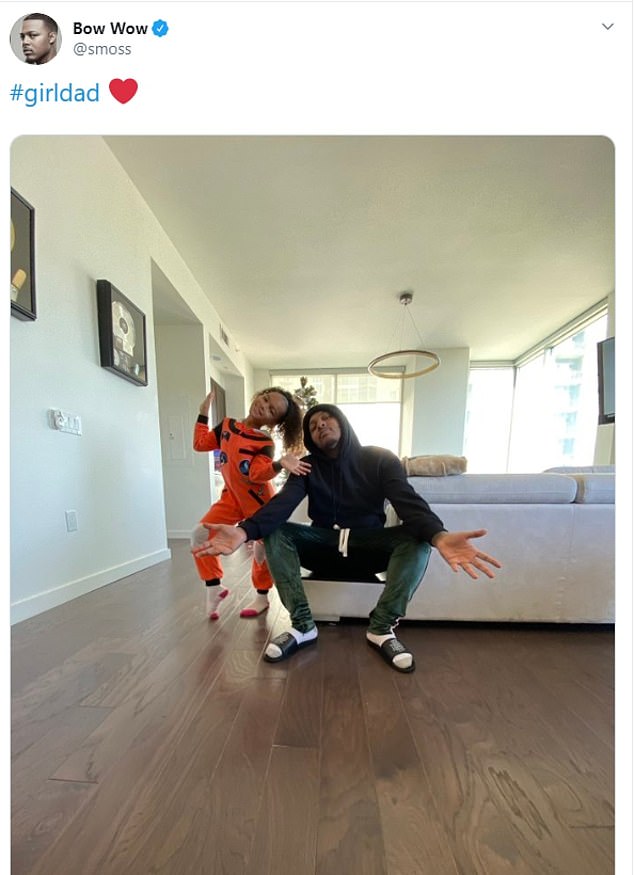 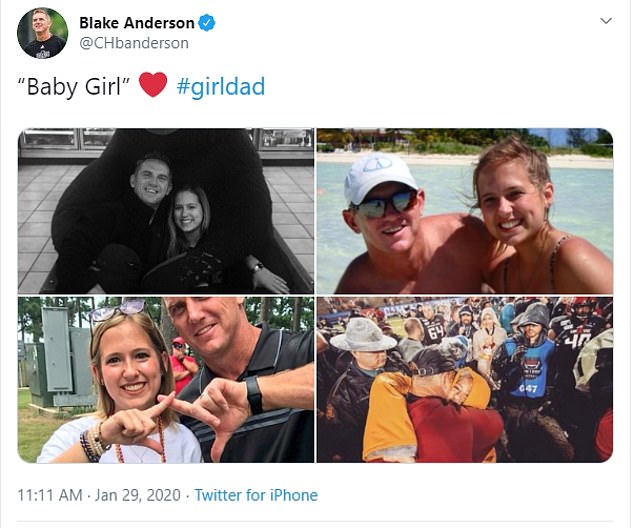 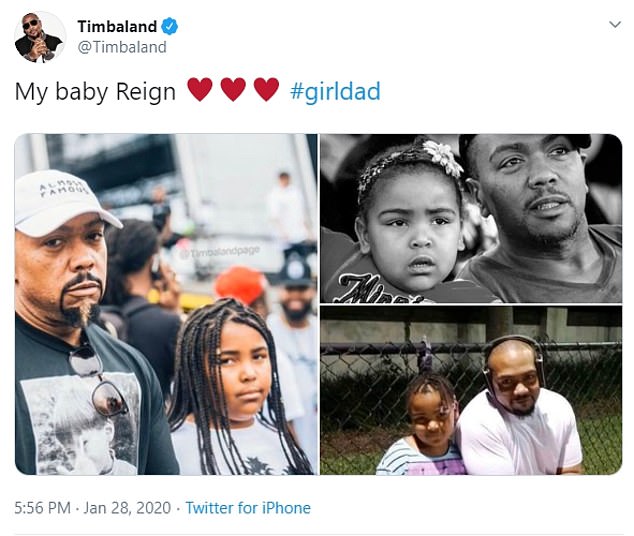 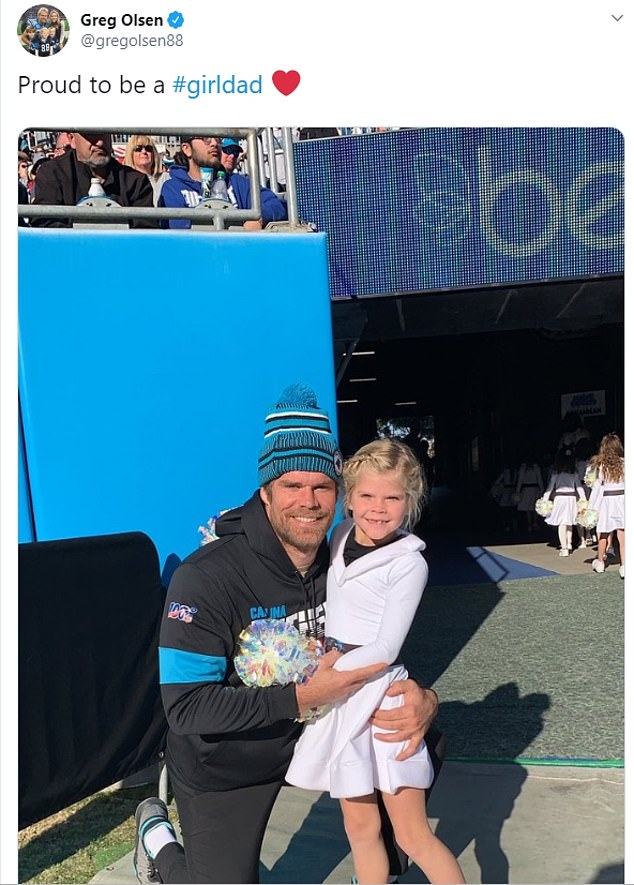 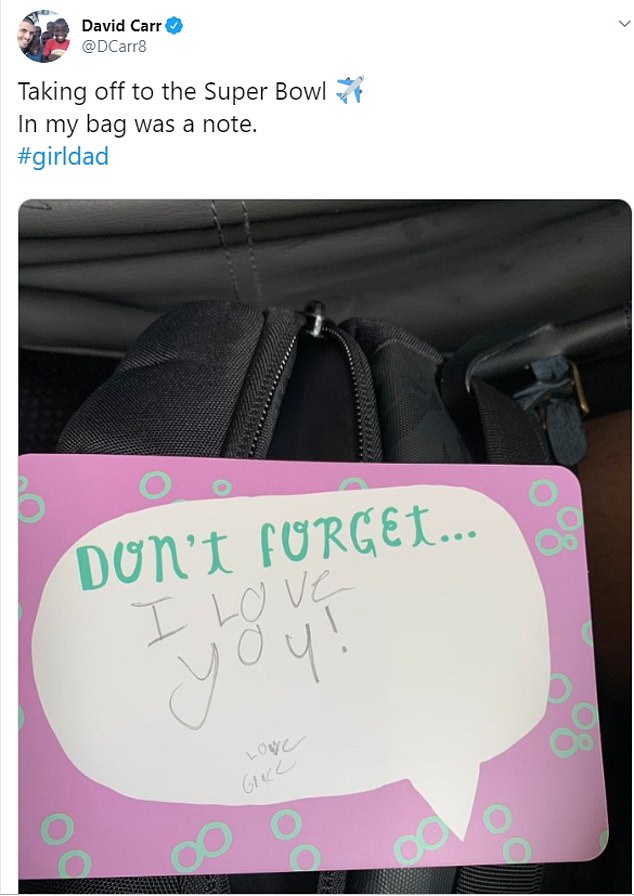 ‘I asked if he wanted more children,’ she continued. ‘He said that his wife Vanessa really wanted to try again for a boy, but was sort of jokingly concerned that it would be another girl. And I was like, “Four girls, are you joking? What would you think? How would you feel?”

‘Without hesitation, he said, “I would have five more girls if I could. I’m a girl dad.”‘

The saddest moment came when she described Bryant talking about his children, especially his daughter Gianna, who died alongside him in the helicopter accident.

Duncan said: ‘When it came to sports, he said that his oldest daughter was an accomplished volleyball player, and that the youngest was a toddler, so TBD. But that middle one, he said that middle one was “a monster, she’s a beast. She’s better than I was at her age. She’s got it.” 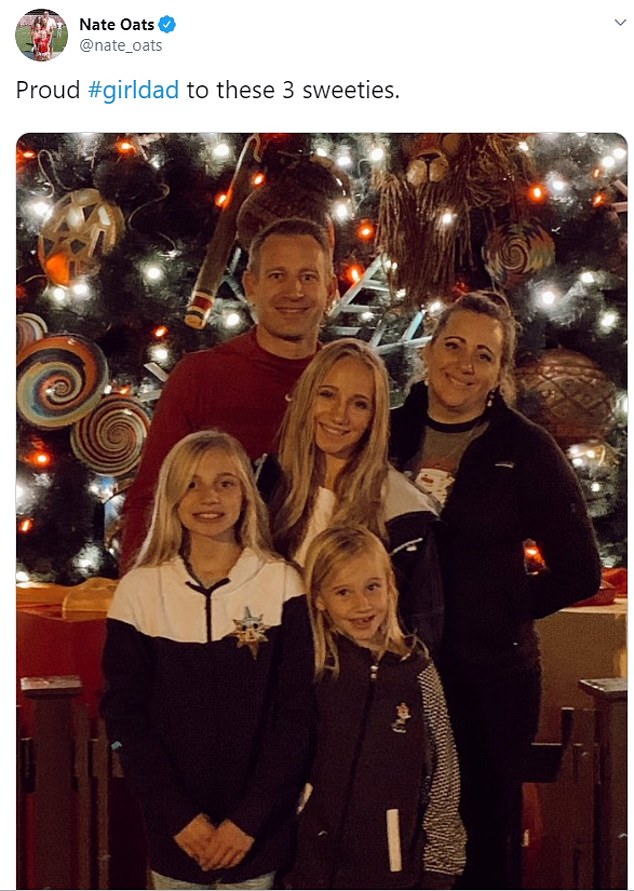 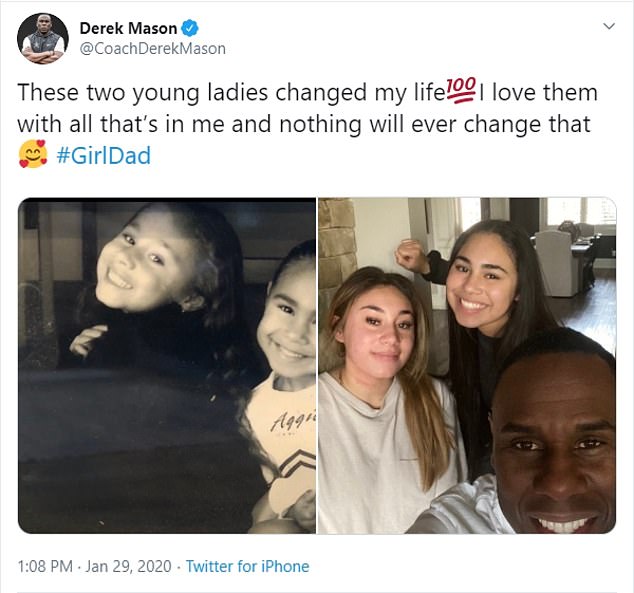 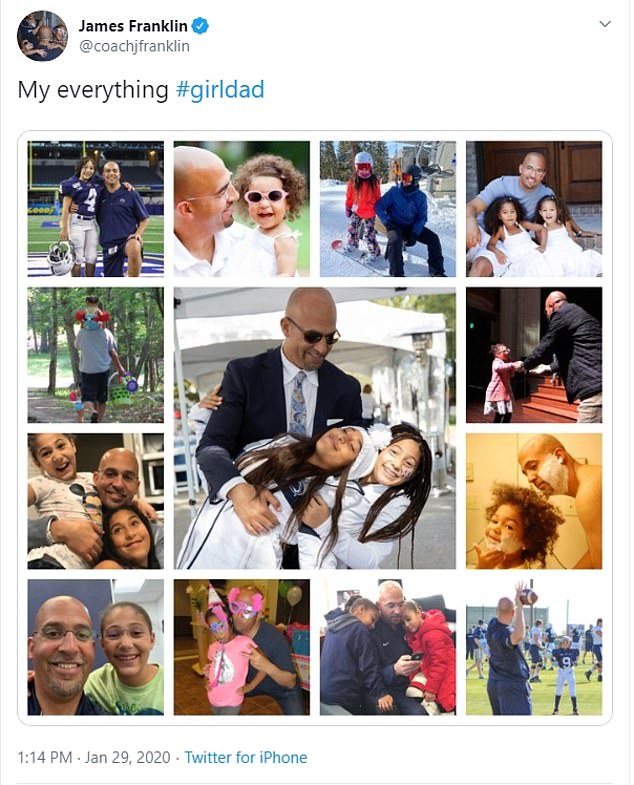 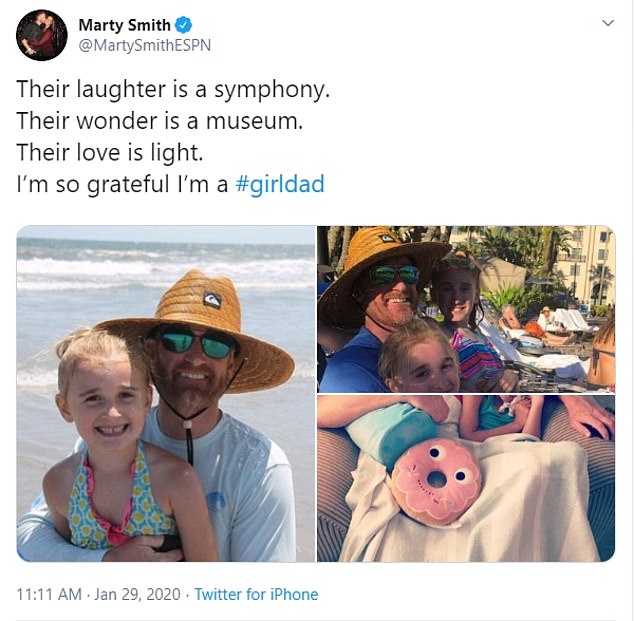 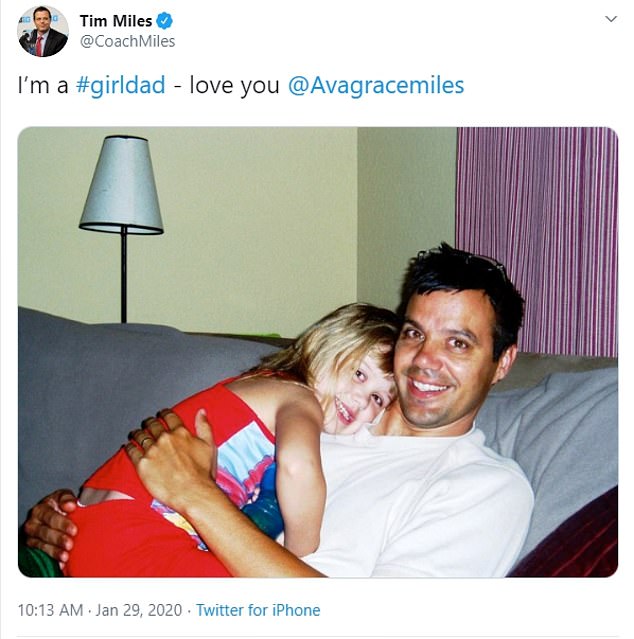 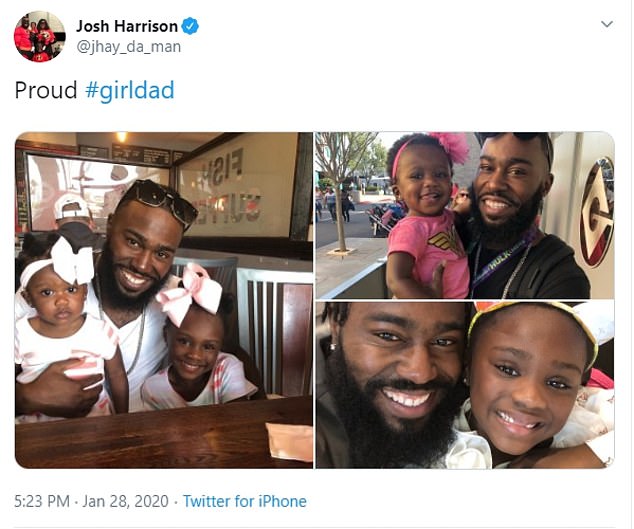 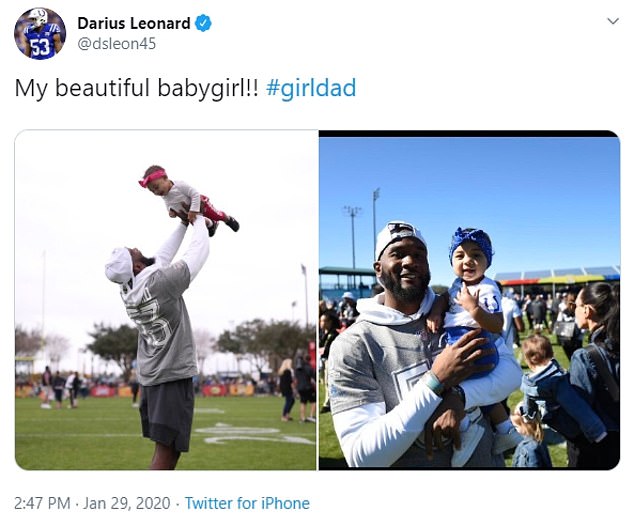 ‘That middle one, of course, was GiGi. When I reflect on this tragedy, and that half hour I spent with Kobe Bryant two years ago, I suppose that the only small source of comfort for me is knowing he died doing what he loved the most: being a dad. Being a girl dad.’

Bryant’s words inspired thousands of dads — including famous ones — to honor their daughters in his memory.

Sportscaster and former New York Yankees player Alex Rodriguez tweeted:  ‘I’m so proud and lucky to be a #GirlDad.’

Rapper Bow Wow wrote #GirlDad when he shared a photo of himself posing with his daughter, Shai Moss. 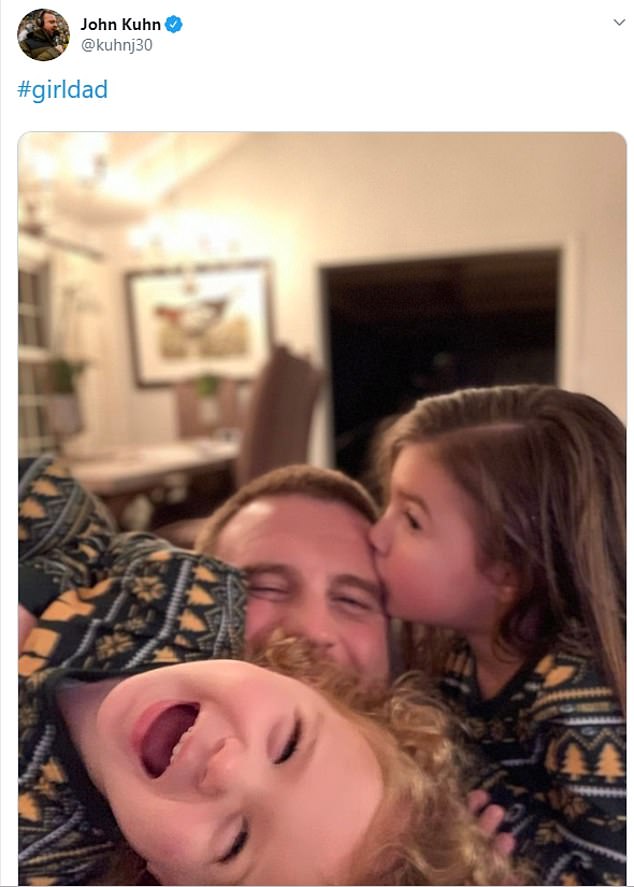 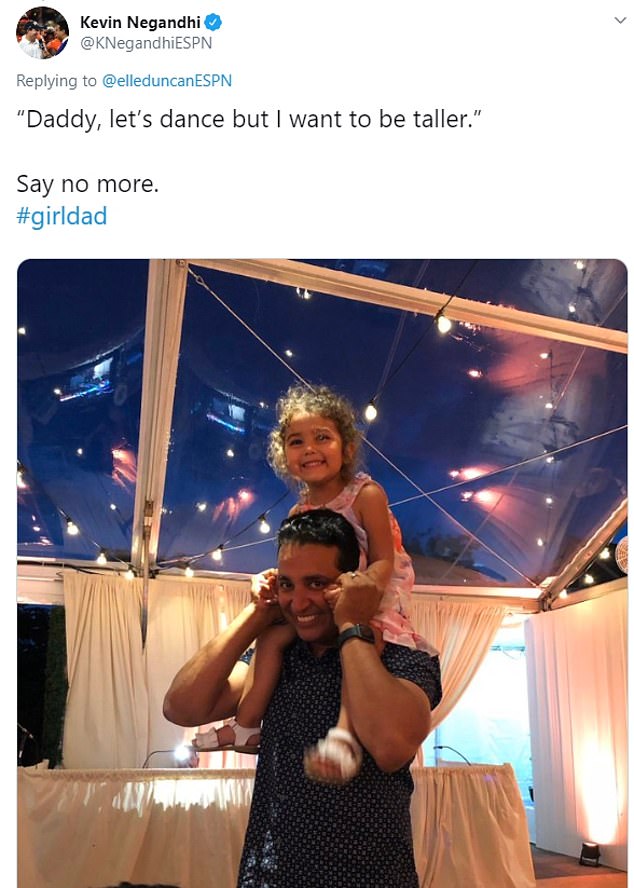 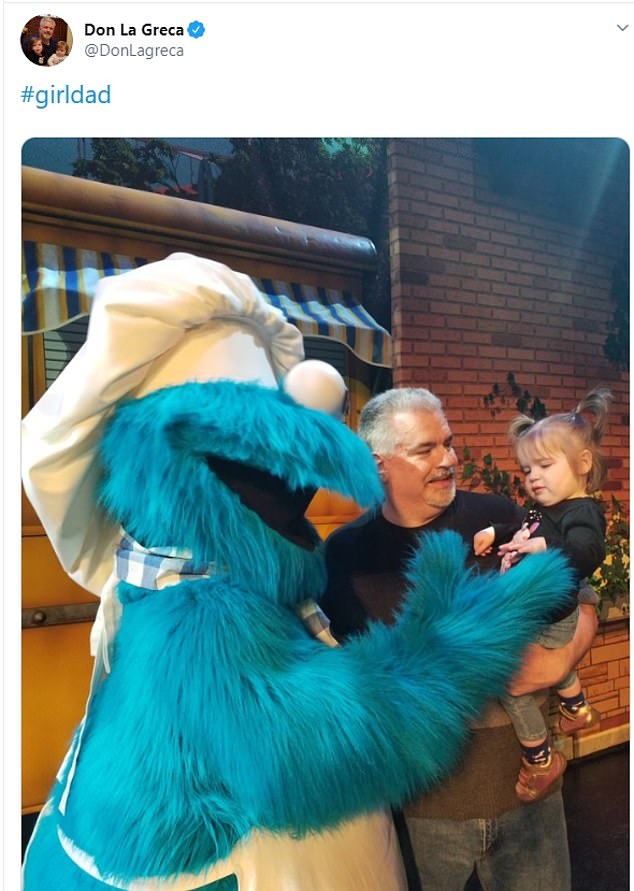 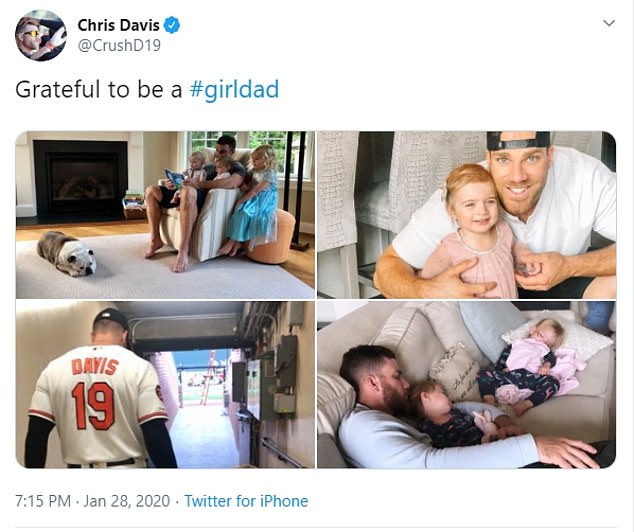 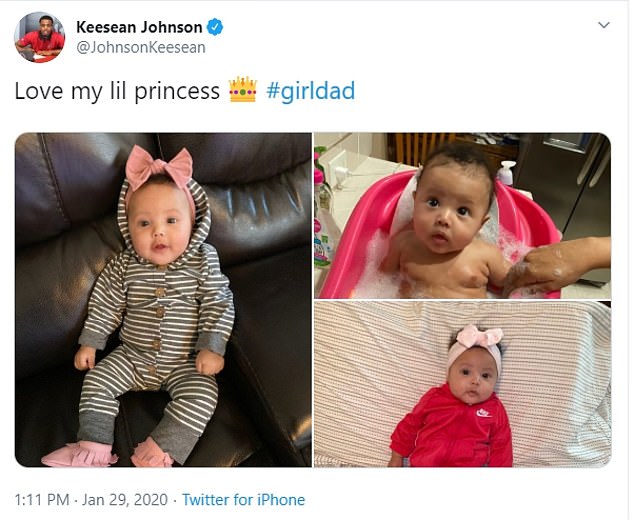 ‘My baby Reign #girldad,’ rapper Timbaland captioned a photo of himself with his daughter.

‘I am proud and honored to be a #GirlDad!’ he tweeted.

And Chicago Cubs pitcher Casey Sadler posted a photo of himself and his daughter, writing: ‘#girldad and proud of it.’ 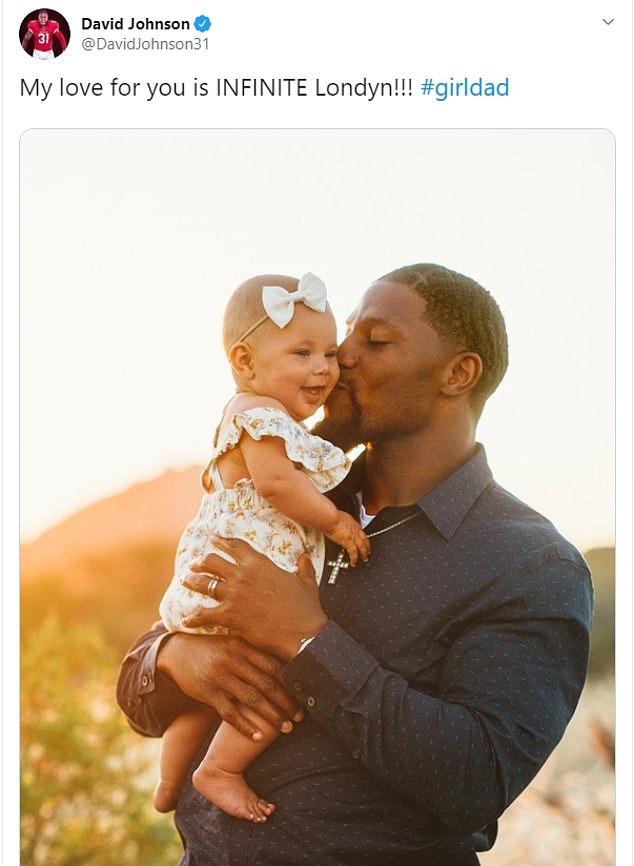 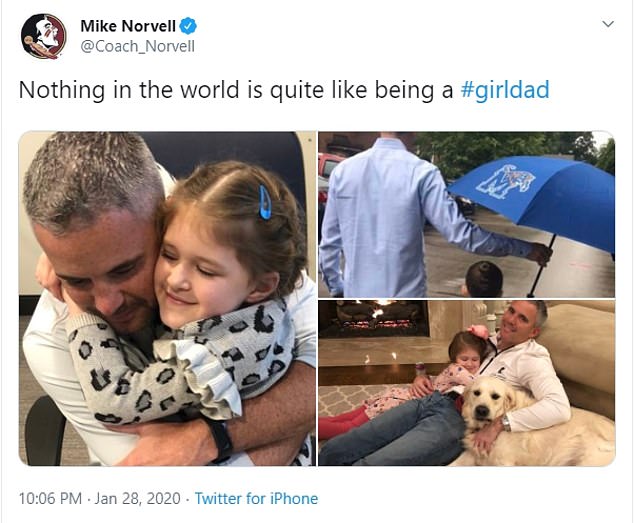 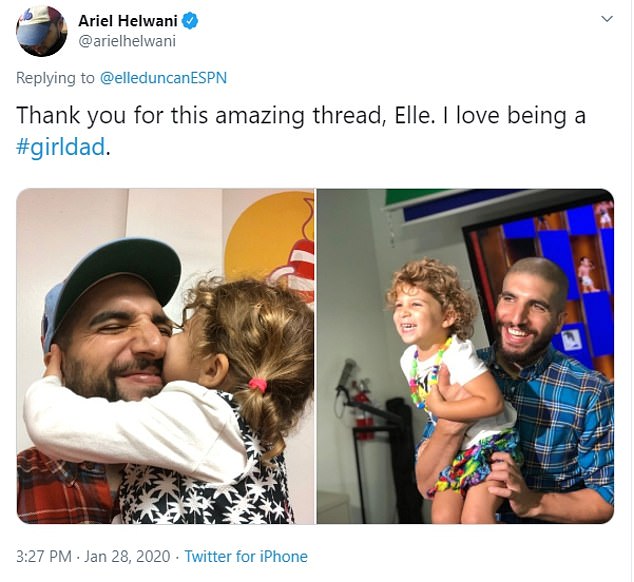 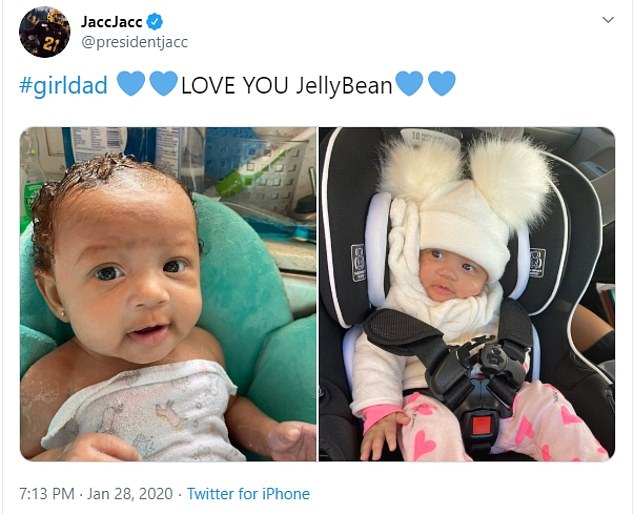 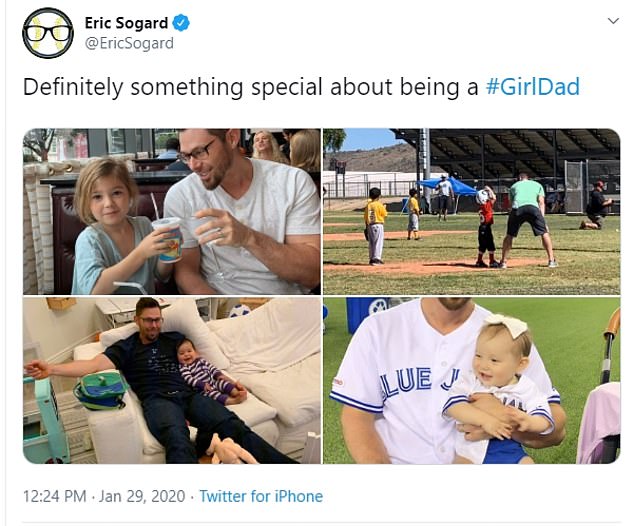 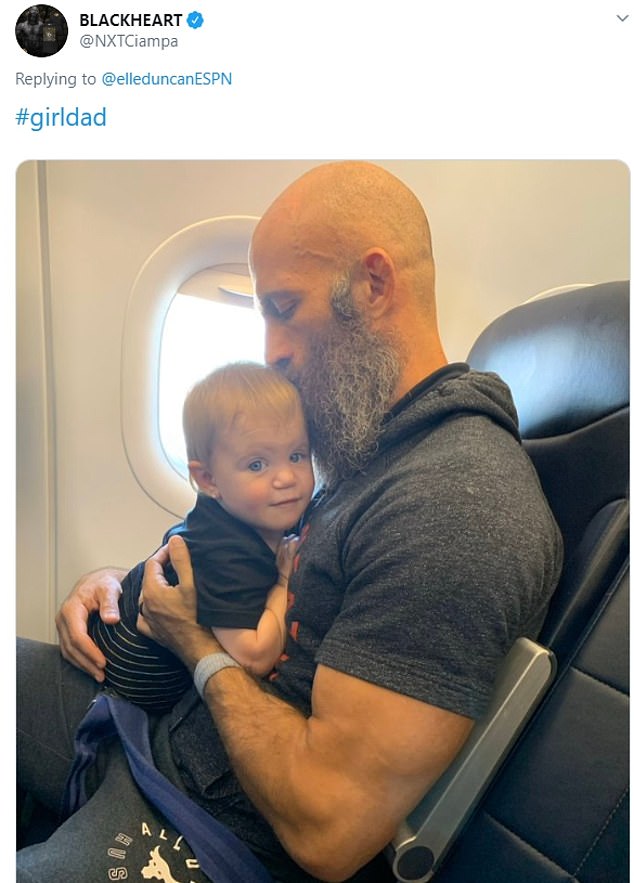 Sadler told one of his followers the picture is in honor of Bryant and him being a father to four girls.

‘I will be grateful for whatever the Lord blesses me with,’ he commented. ‘Right now that is being a #girldad and its something I love and cherish. One doesn’t take away the other.’

Bryant and Gianna had been on their way to the Mamba Academy in Thousand Oaks, California for basketball practice when the chopper crashed at around 9:30 a.m. on Sunday.

They died along with all seven others on board as the S-76 Sikorsky helicopter encountered thick fog and crashed into hills of Las Virgenes Canyon, which is home to celebrities such as the Kardashians. 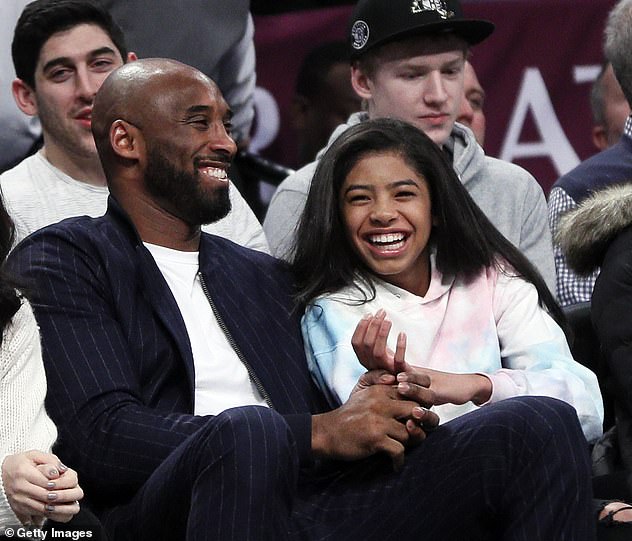 Heartbreaking loss: Bryant and Gianna died in a helicopter crash in Calabasas, California, on Sunday along with seven others. They are pictured together last month 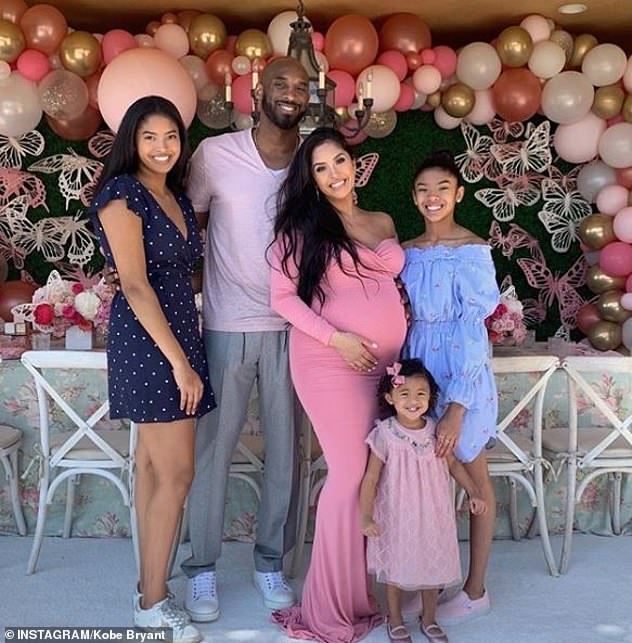 Family: Bryant is survived by his wife, Vanessa, and their three other daughters: Natalia, 17, Bianka, three, and Capri, seven months

Bryant is survived by his wife, Vanessa, and their three other daughters: Natalia, 17, Bianka, three, and Capri, seven months.