Korean ‘nut rage’ heiress ‘is filmed shouting “Die! Die!” at her husband’ and accused of strangling him, hurling an iPad at him and attacking their children with chopsticks ‘for not eating quickly enough’

Footage has emerged purportedly showing a South Korean heiress known for her ‘nut rage’ tantrum shouting ‘Die! Die! at her husband amid claims she has been physically abusing him and their children.

Cho Hyun-ah shot to international infamy in 2014 when she lost her temper on board an aircraft over the way she was served nuts in first class before take-off from the US.

The 44-year-old daughter of Korean Air chairman Cho Yang-ho was jailed for the rant, in which she ordered attendants to kneel and beg for forgiveness.

Her husband, surnamed Park, has now claimed Cho has been physically and verbally abusing his family, including their five-year-old twin sons, since she was released from prison in 2015. He filed charges against Cho – who denies the allegations – on Wednesday.

Cho Hyun-ah shot to international infamy in 2014 when she lost her temper on board an aircraft over the way she was served nuts in first class before take-off from the US. 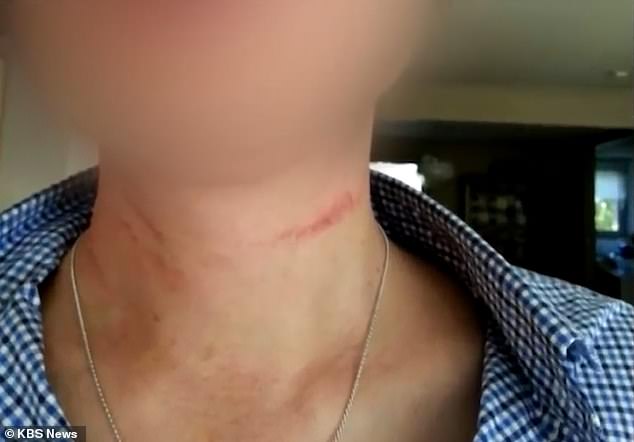 ‘He is suing her for child abuse and inflicting of bodily injury, among other things,’ an officer at the National Police Agency told AFP.

Park, a plastic surgeon, and Cho – who married in 2010 after meeting in elementary school – are in the process of divorcing.

He shared photographs of his neck and toe wounds with a local TV station, claiming they were inflicted by Cho, and said he had submitted photos and video footage of the abuse to police.

His wife repeatedly ‘strangled him’ and threw a tablet PC at him, injuring his toe, he told authorities.

Park also claimed Cho threw spoons and chopsticks at their young children for ‘not eating quickly enough’ and verbally abused them for ‘not falling asleep’. He is seeking full custody of the boys.

Cho made headlines around the world in 2014 after her ‘nut rage’ tantrum.

She was sentenced to a year in prison for hampering an air route after ordering the Seoul-bound Korean Air plane back to the gate so she could have a flight attendant ejected. 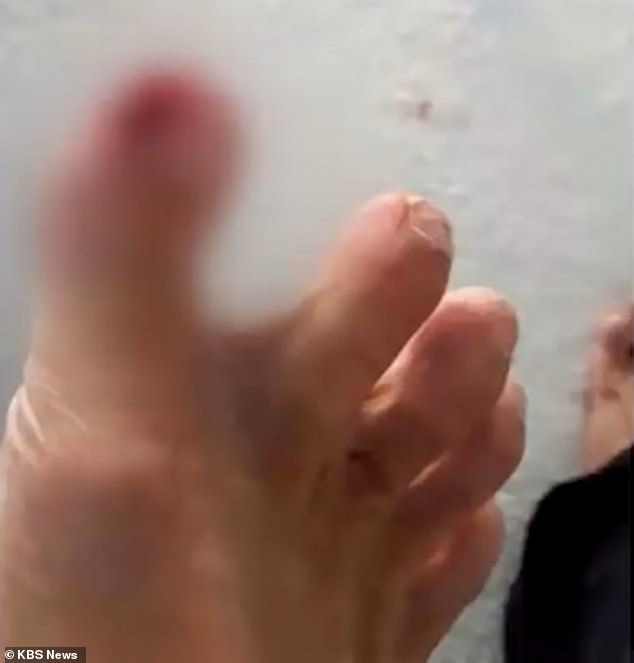 His wife repeatedly ‘strangled him’ and threw a tablet PC at him, injuring his toe, he told authorities

The attendant, along with a colleague, had served her macadamias in a bag rather than a bowl – prompting Cho to order them to kneel and beg for forgiveness.

She was later cleared on appeal and served just five months.

A spokesman for Cho’s law firm Sejong denied her husband’s allegations, claiming Park is an alcoholic and therefore his memories are flawed. He has been hospitalised for alcoholism three times during their marriage, the firm said.

‘We are seriously considering filing a complaint against Park for defamation.’

Other family members of Cho, including her mother Lee Myung-hee and her sister Cho Hyun-min, have been accused of abusing their employees.

The alleged abuses range from cursing and screaming at staff members to kicking, slapping and even throwing a pair of scissors at them.

A series of scandals – including allegations over tax evasion and smuggling of furniture and food – have also left Cho’s father, Korean Air chairman Cho Yang-ho, facing mounting scrutiny that has riled the public and even sparked protests by the firm’s employees.