Kourtney Kardashian gave her a fans a special assortment of travel photos from her previous trip to London on her Instagram earlier on Sunday.

The Keeping Up With The Kardashians star, 43, stunned in a fashionable mirror selfie as she stopped inside a store in the heart of the city while accompanying her husband, Travis Barker, 46.

The Poosh founder recently celebrated the launch of her supplemental vitamin brand called Lemme, and held a star-studded party to celebrate the new business venture.

London time: Kourtney Kardashian, 43, shared a collection of throwback photos from her trip to London with husband, Travis Barker

One of snaps she uploaded to her 199 million followers was of herself taking a quick stylish mirror selfie in what appears to be a clothing store in the beautiful city.

The TV personality could be seen wearing a pair of loose-fitting blue jeans along with a black shirt tucked into the waist of her pants.

Kourtney added a long, patterned coat that fell down towards the floor and comprised of black feathers around the collar.

She added a pair of purple shades, while her hair was pulled back into a low bun, allowing her bangs to fall down in front of her face.

In the background of the photo, Travis could be seen taking a look at some of the pieces in the store. 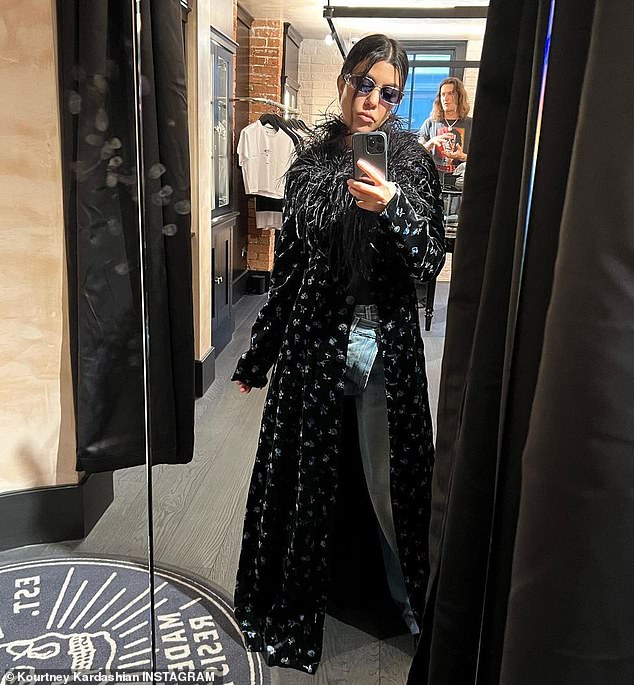 Stylish: The beauty shared two photos of herself wearing a fashionable coat in the photo series she shared on Instagram earlier Sunday 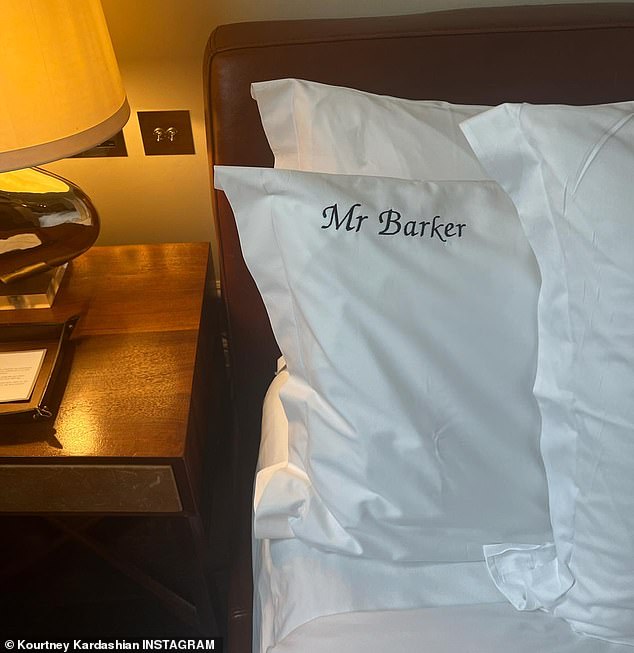 Cute: The reality star shared a snap of a pillow with Mr. Barker printed on one of the pillowcases in their hotel room 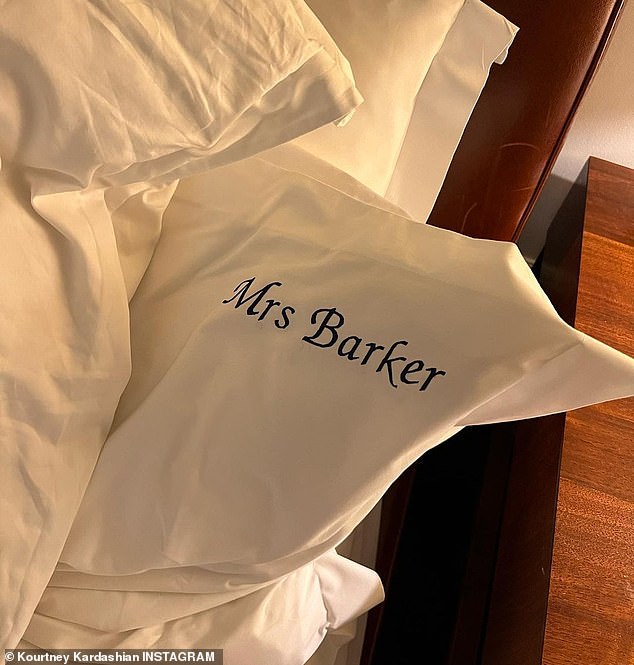 Previous throwback photo: In a recent photo series, the beauty shared a snap of a pillow with Mrs. Barker also printed on a pillowcase

Another cute snap she shared captured the words Mr. Barker printed on one of the pillowcases in their hotel room.

In a previous Instagram post that contained additional photos of her trip to London, the reality star uploaded a photo of Mrs. Barker printed on another pillowcase.

Kourtney then took time to show her fans some of the delicious meals and tasty treats she was able to try alongside her husband.

A photo showcased white coffee cups full of a warm, refreshing Matcha drink that was placed on a silver tray on the soft cushions of their bed. 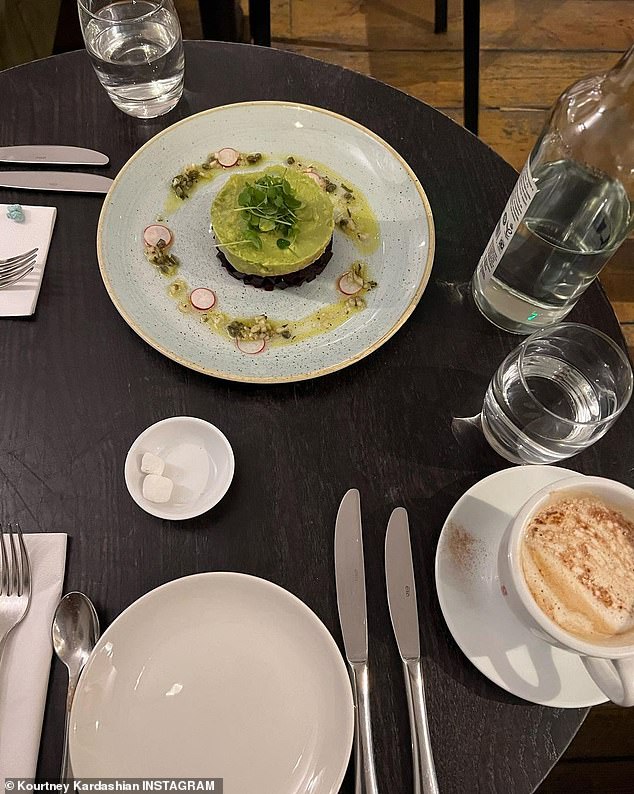 Yummy food: Kourtney showed a few snaps of some of the delicious treats and meals she was able to try while in London 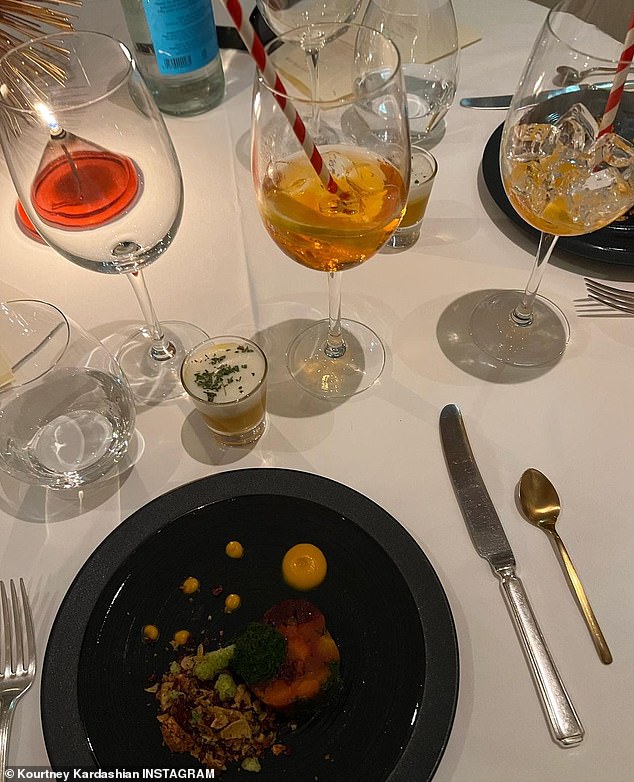 Memorable moments: The businesswoman uploaded a snap of a tasty dinner she had on one of the nights in the city 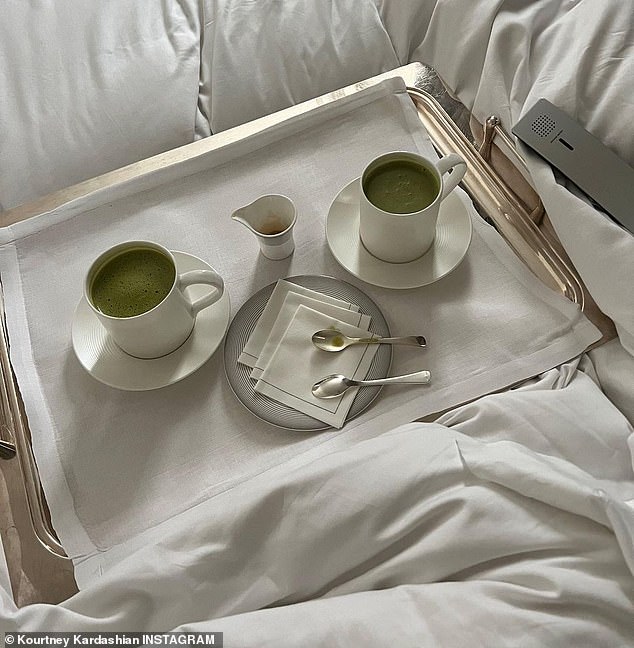 Relaxing: Kourtney and Travis appeared to have a quiet and peaceful time while enjoying time in London

To conclude her photo collection, the mother of three shared a snap of pink tulips and red roses in a vase placed on top of a wooden table.

The last snap Kourtney took showcased a building and decorations when they made a stop in London’s Chinatown district.

Travis commented on his wife’s throwback collection, and typed, ‘London is always a good idea.’

In the caption of her post, Kourtney added various emojis, such as an avocado, rose, skull, frog, and coffee cup.

While the two lovebirds were in London last month towards the beginning of September, Travis joined the Foo Fighters for the Taylor Hawkins Tribute Show. He played the drums during a special set in a heartfelt tribute to the late drummer. 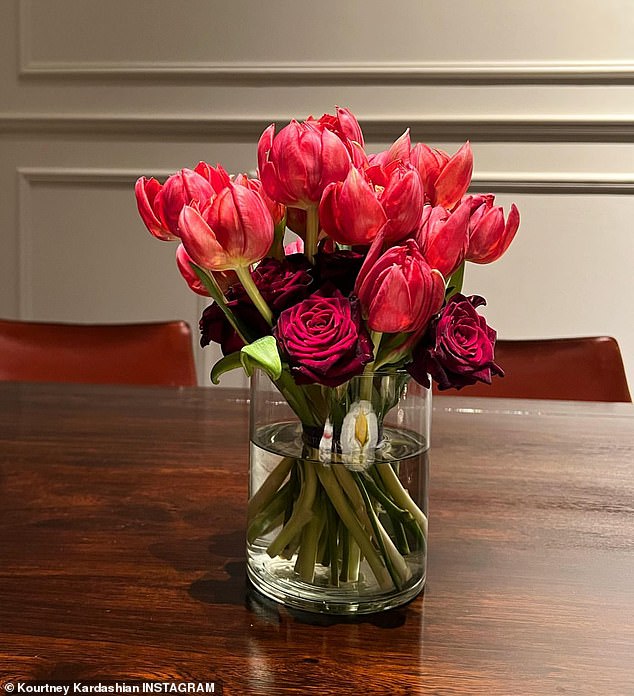 Romantic: The businesswoman and Poosh founder showed a lovely vase full of tulips and roses 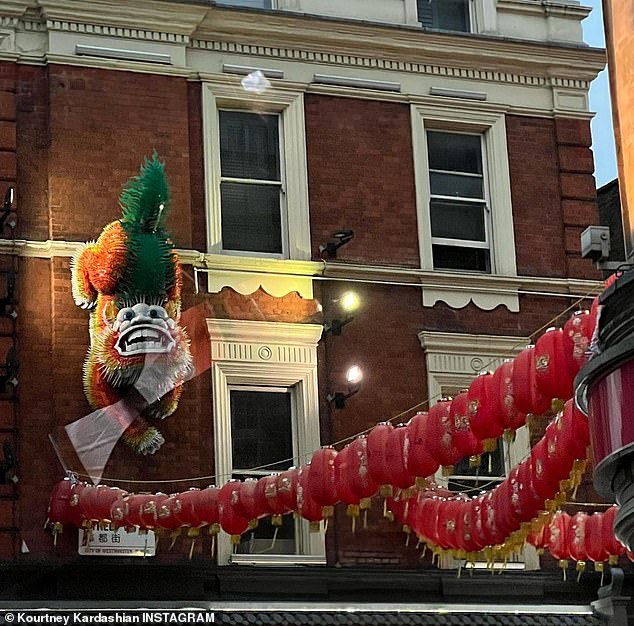 Seeing the sites: Kourtney shared a snap of decorations outside of a building as she visited London’s Chinatown district

After returning from her glamorous trip to London, Kourtney dived straight into her next business venture. Earlier on Tuesday, the star launched her own wellness brand call Lemme which offers supplemental vitamins.

Three kinds of vitamins are offered, and are categorized under Matcha, Chill, or Focus.

On Sunday, the mother of three also shared photos onto her main Instagram page from the launch party that was held to celebrate the big moment.

In attendance was her family, including Kim Kardashian, Khloe Kardashian, Kendall Jenner, and mother, Kris Jenner.

Her husband, Travis, was also a guest to show his support for the brand’s official launch. The two were seen cozying up and having a blast together at the event. 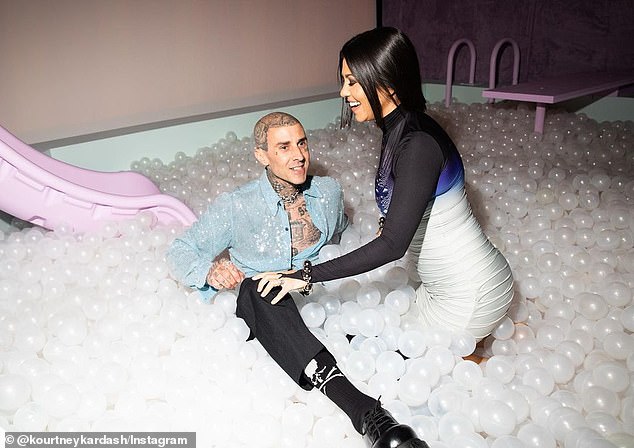 Having fun: Kourtney and Travis were pictured having a blast at the reality star’s party to celebrate the launch of her wellness brand called Lemme 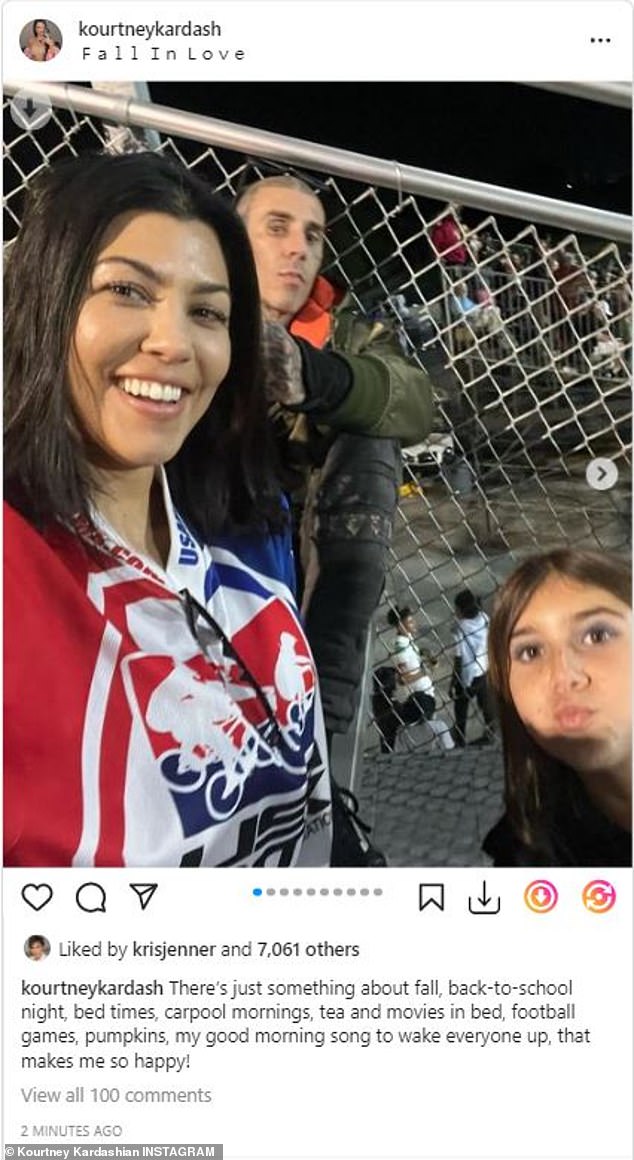 Spooky season: The TV personality recently shared a previous photo series as herself and her family celebrated the fall season