Kourtney Kardashian, 43, looked stunning in a black one-piece swimsuit with sexy cut out detailing  as she soaked up the sunshine by a swimming pool on Sunday.

The 43-year-old Keeping Up With The Kardashians veteran was taking in the beauty of Lake Como in northern Italy where George Clooney has a villa.

She was joined on the trip by her future husband, drummer Travis Barker, 46, who showed off his array of tattoos on his bare chest while clad in a pair of Baywatch red swim trunks.

Barker stayed close to his lady love, who he has known for eight years and the couple are also neighbours in Calabasas, California. 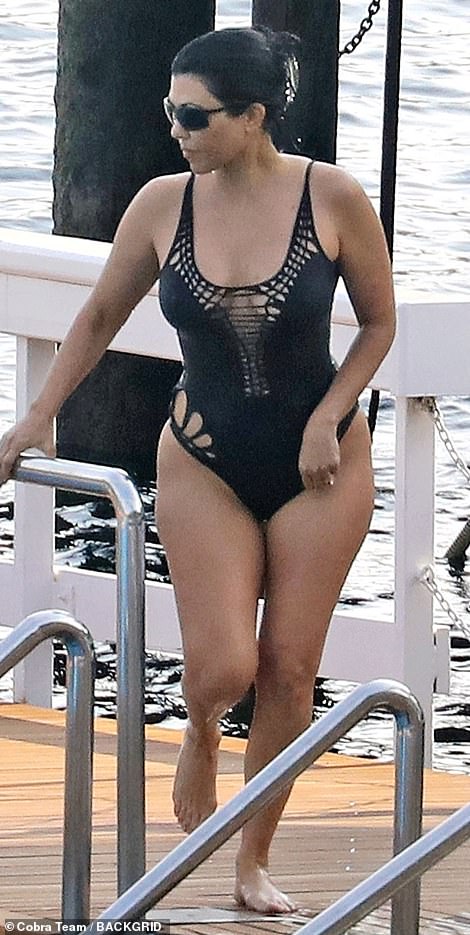 Swim ready: Kourtney Kardashian , 43, looked stunning in a black one-piece swimsuit with cut outs everywhere as she spent time by a swimming pool on Sunday 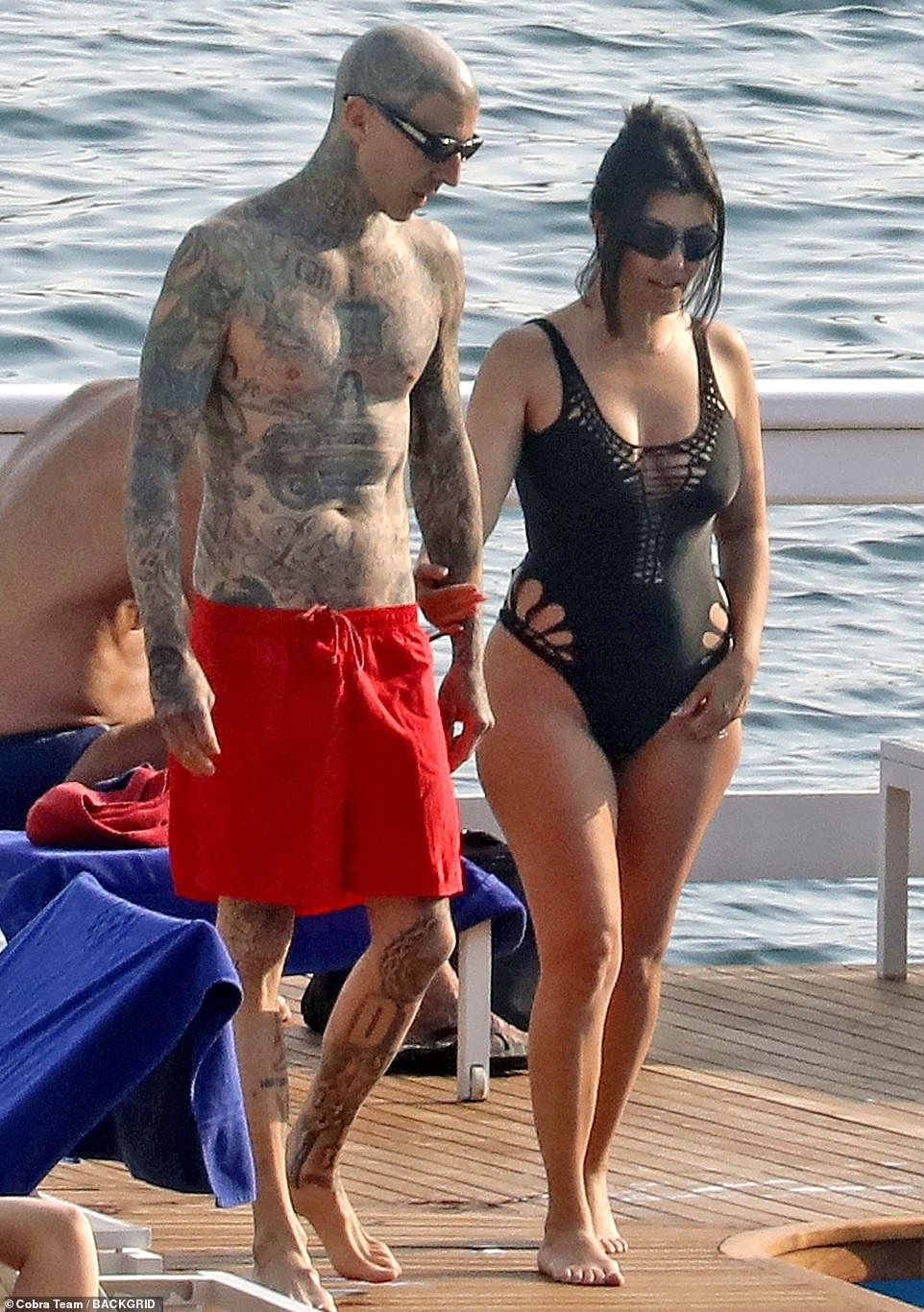 She put a hand on his arm: Also with the petite TV wonder was her husband-to-be Travis Barker of the band Blink 182

As they soaked up the sunshine in the balmy Italian climes, the two were seen taking off their clothes to reveal their swimwear and beamed broadly at one another as they headed into the pool for a refreshing dip.

The couple strode into the pool while arm in arm as they couldn’t stop making public displays of affection.

The POOSH founder showed off her raven tresses that were scraped back in a bun, with some pieces of hair left down to frame her face. 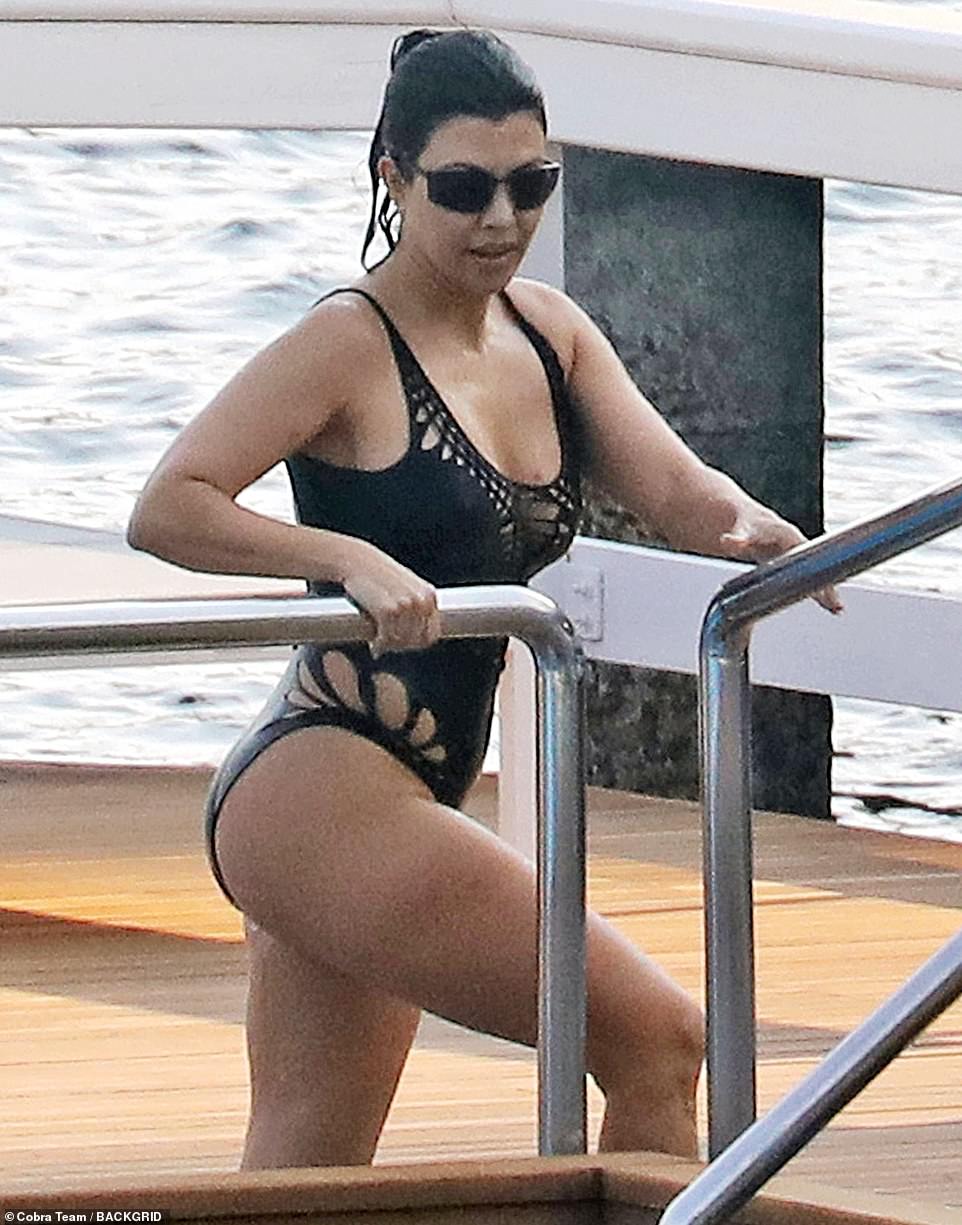 Making a big splash: The 43-year-old Keeping Up With The Kardashians vet was taking in the beauty of Lake Como in northern Italy where George Clooney has a villa 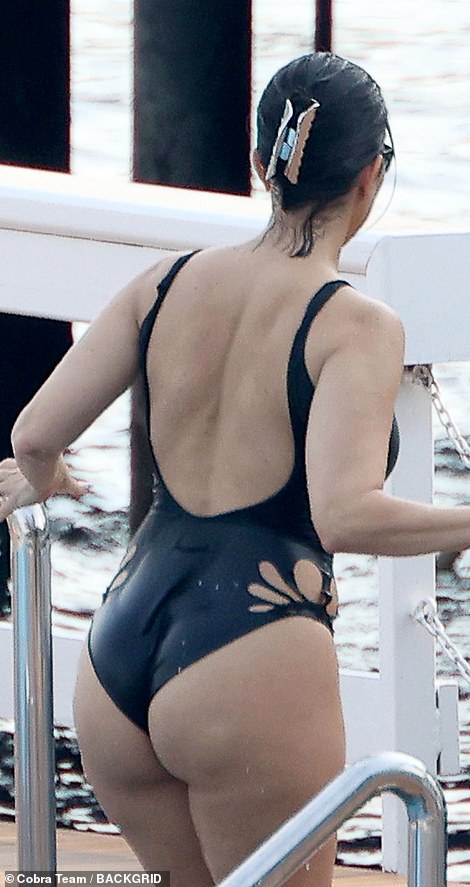 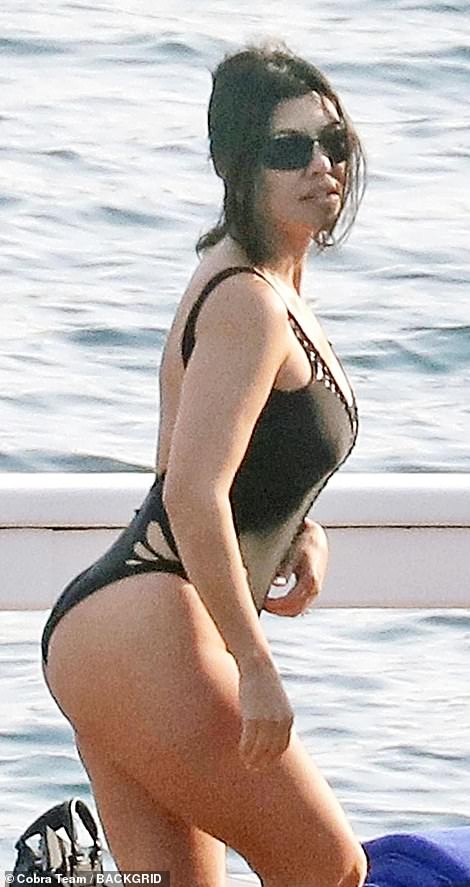 She sure keeps her shape nice: The eldest Kardashian showed off her backside where she had zero cellulite

The eldest daughter of Kris Jenner also had on black sunglasses and her nails were nicely polished.

After their brief swim, they both toweled off with royal blue towels.

They were last seen in the Italian city of Milan on Saturday where they wore all black. The pair were spotted taking a stroll around the Italian city, before jetting off in a private plane later in the day.

Kourtney donned a black satin trousers and shirt co-ord for their outing, with a pink flower print and collar neck cut. 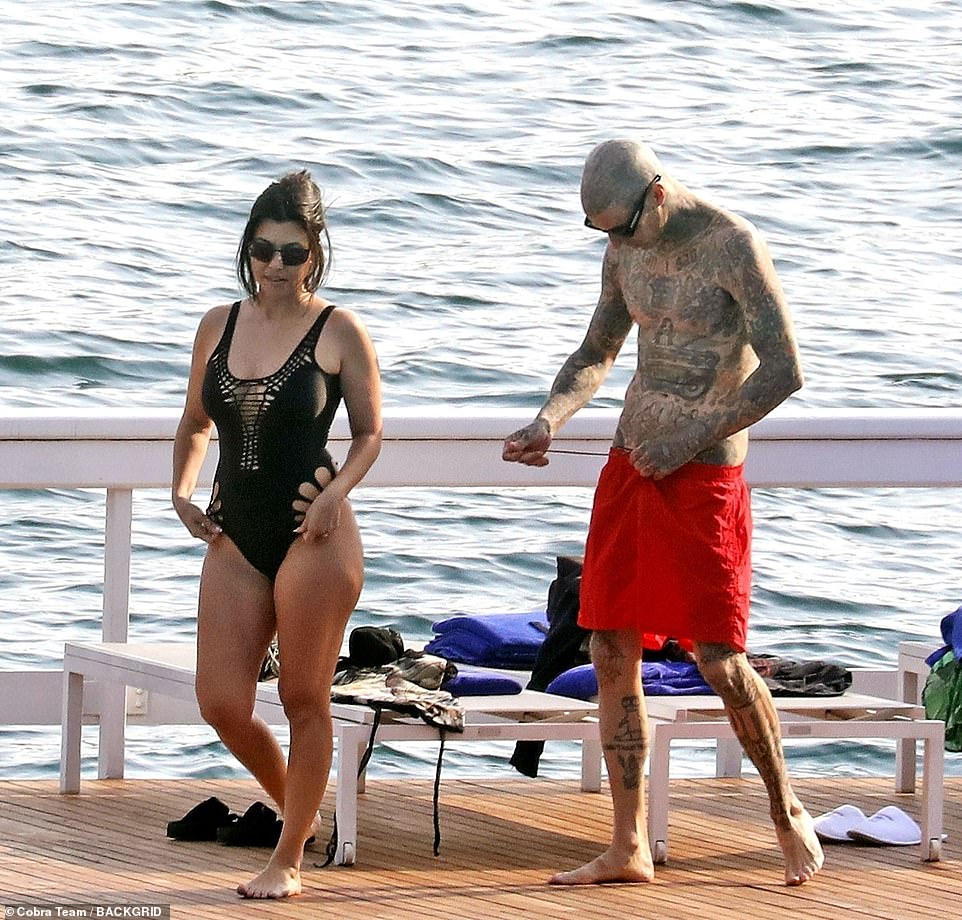 Let’s take a dunk: Also seen was her future husband, drummer Travis, 46, who showed off his array of tattoos on his bare chest as he had on his red swim trunks 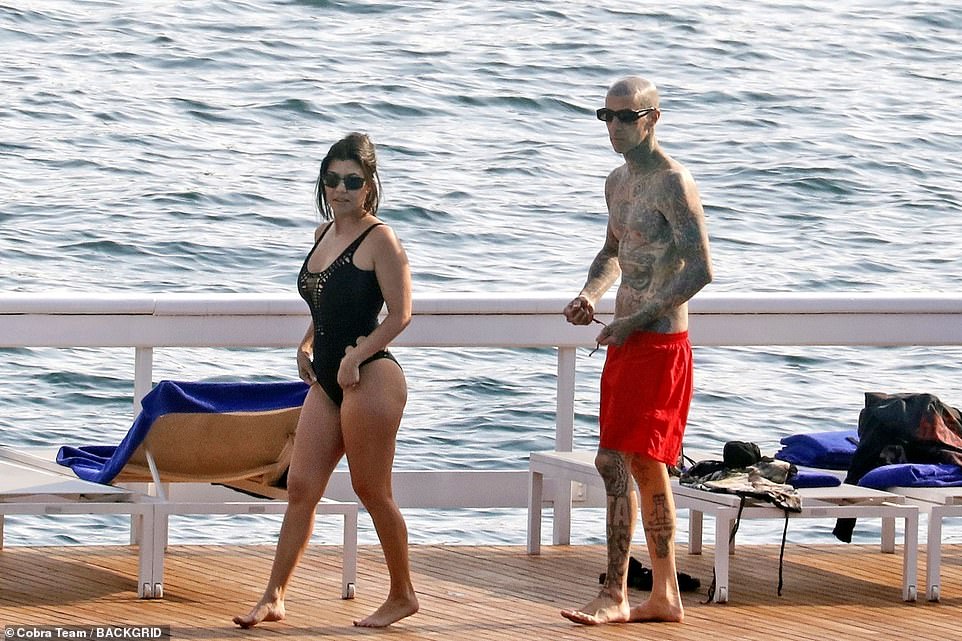 When Kourtis hit Italy; The lookers surprisingly did not match their suits. They often match their clothing at events

Getting the most out of their holiday, Kourtney shared videos of a boat ride in Lake Como on Saturday morning to Instagram.

The Italian getaway could be a ‘honeymoon’ for the pair, who wed in an unofficial Las Vegas ceremony earlier this month month – dubbing it a ‘practice.’ 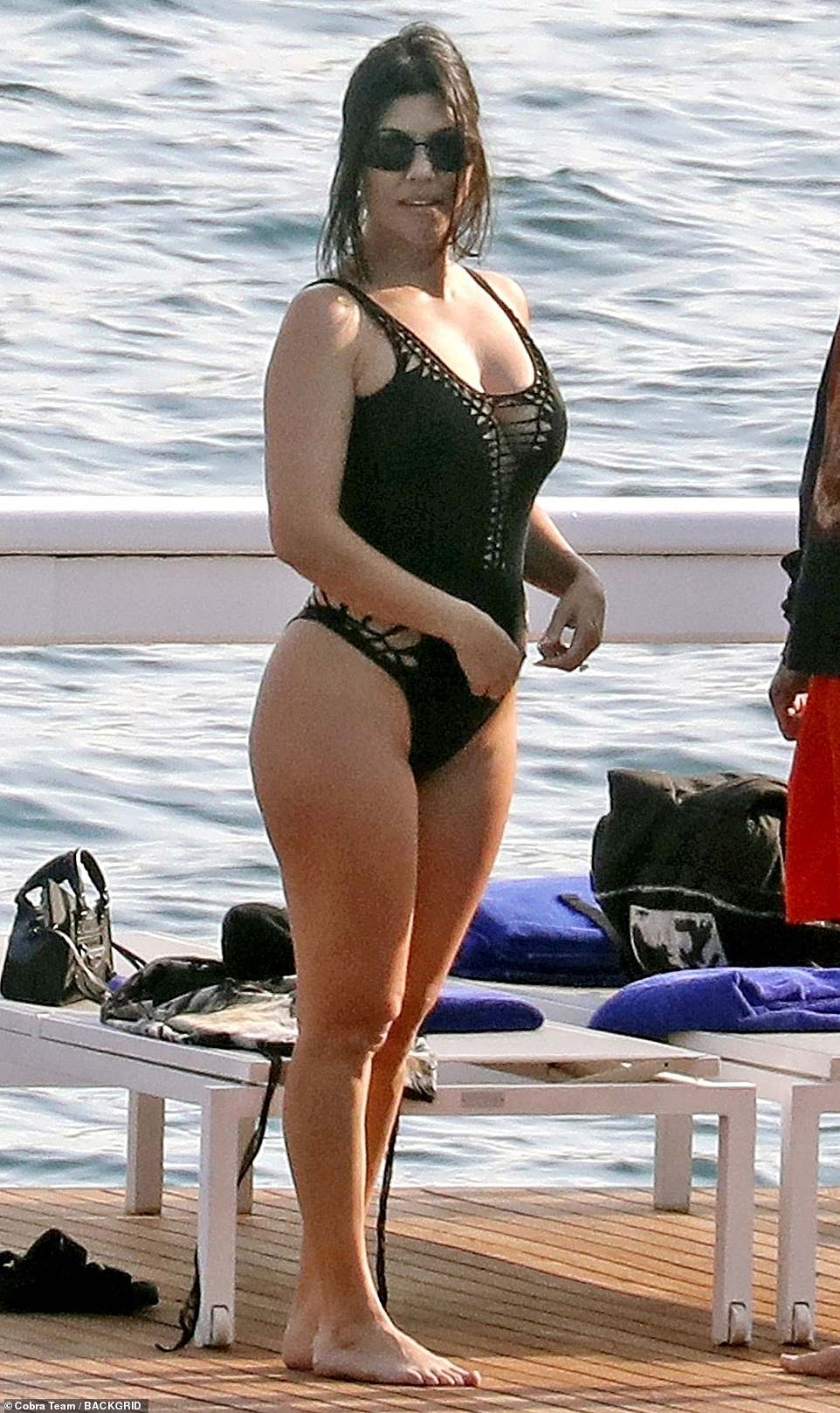 Check out my tummy: The college graduate put her hand on her tummy at one point as if she wanted to pull her suit a bit 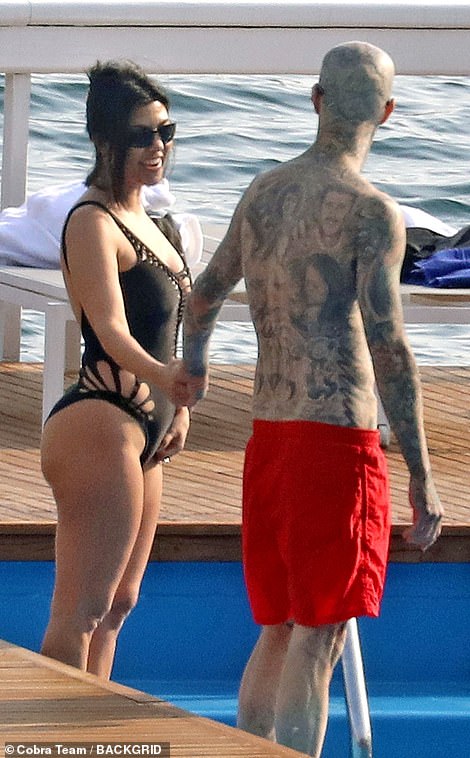 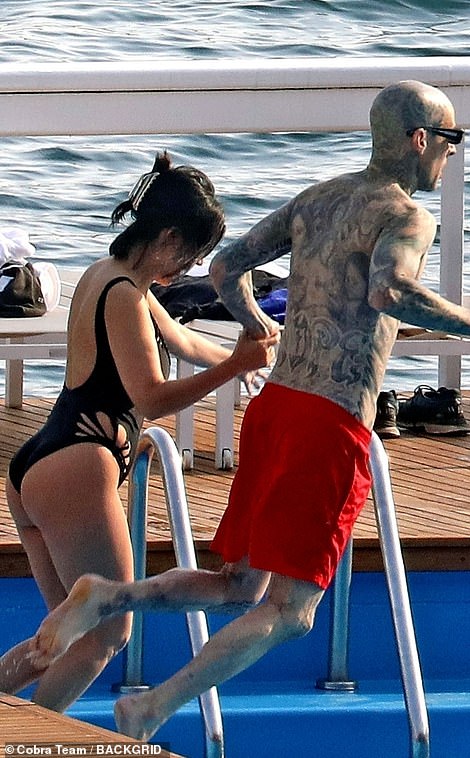 Such a sweet relationship: The TV star smiled at her fiancé as he led  her into the swimming pool

The Blink-182 drummer wanted to make sure he had the blessing of both of the Poosh founder’s parents.

The famous lawyer died in 2003, aged 59, following a battle with oesophageal cancer.

Robert was also known working with pal OJ Simpson during his trial for allegedly murdering his wife Nicole Brown Simpson; he was quitted. 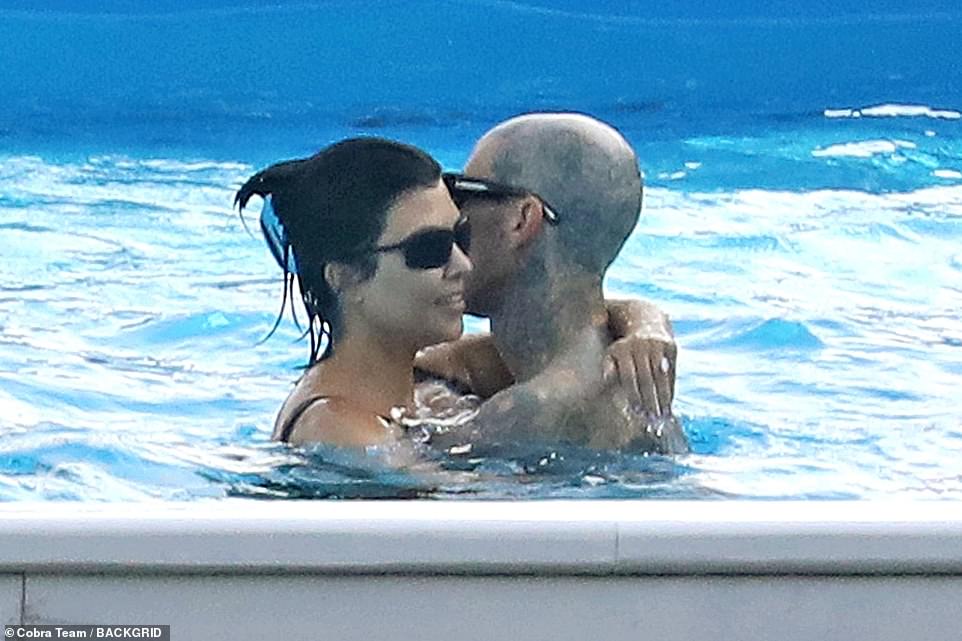 They can’t keep away from each other: The beauty smiled as she had her arms around her love, flashing her diamond ring 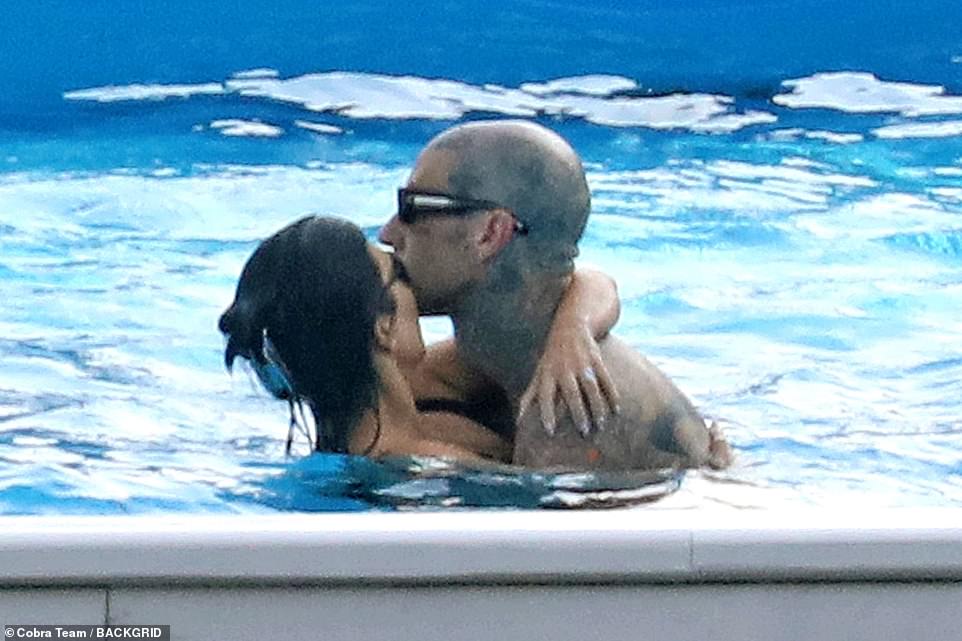 Kisses galore: She looked as if she wanted to go in for a smooch as she looked at her musician beau 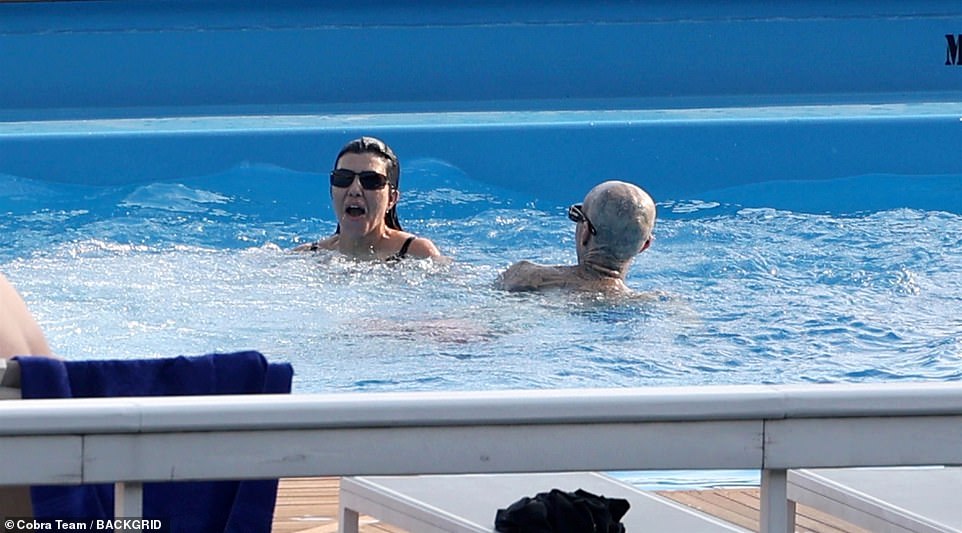 It might be too cold? Kourtney made a face after she got into the swimming pool which had guests around it 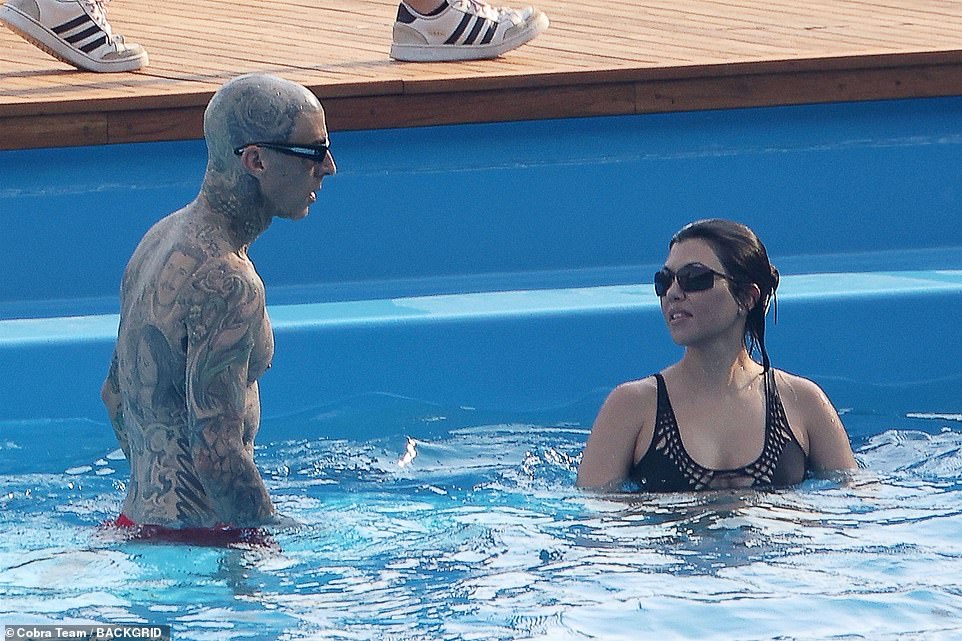 Knowing looks in the shallow end: The two could not keep their eyes off each other, even when in the pool 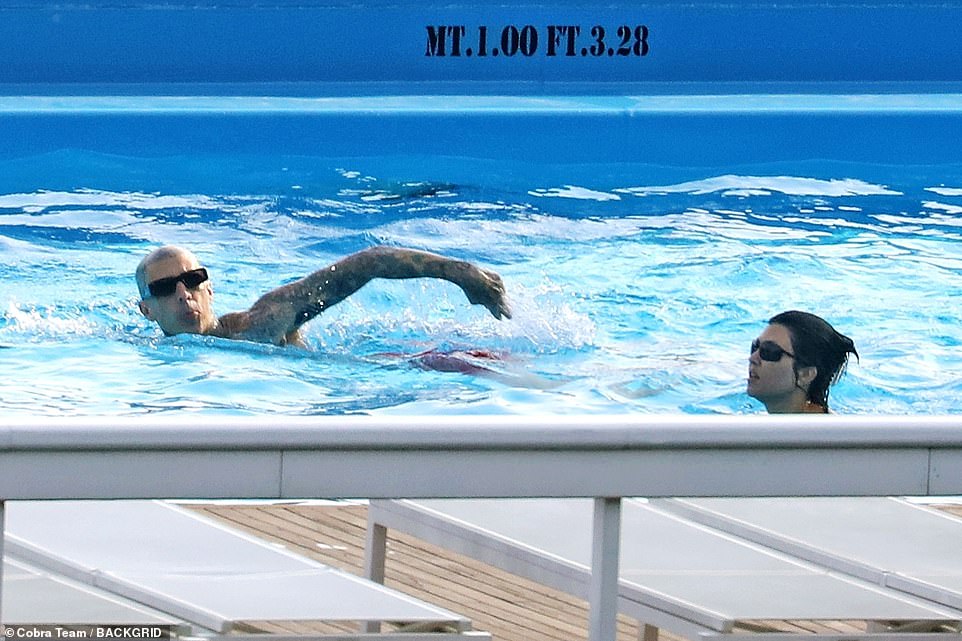 Time for some laps: Barker swam to the side of the swimming pool with Kourtney behind him

And in the latest episode of Hulu’s The Kardashians, Kourtney’s mom Kris revealed the 46-year-old rocker’s sweet gesture.

She said: ‘He came over and asked for her hand in marriage and I was like …

‘It was so sweet and so tender, and then he said he went to your dad’s grave and asked your dad, and I just lost it.’

It was a very emotional moment for momager Kris. 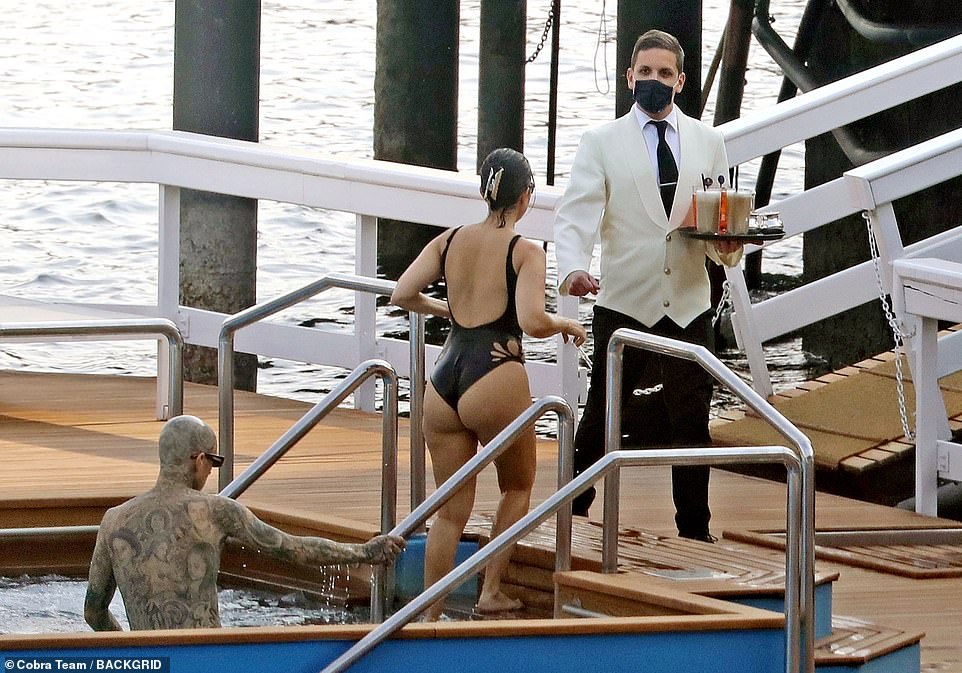 Done with their dip: Kourtney got out of the pool then Travis as a waiter brought them some drinks 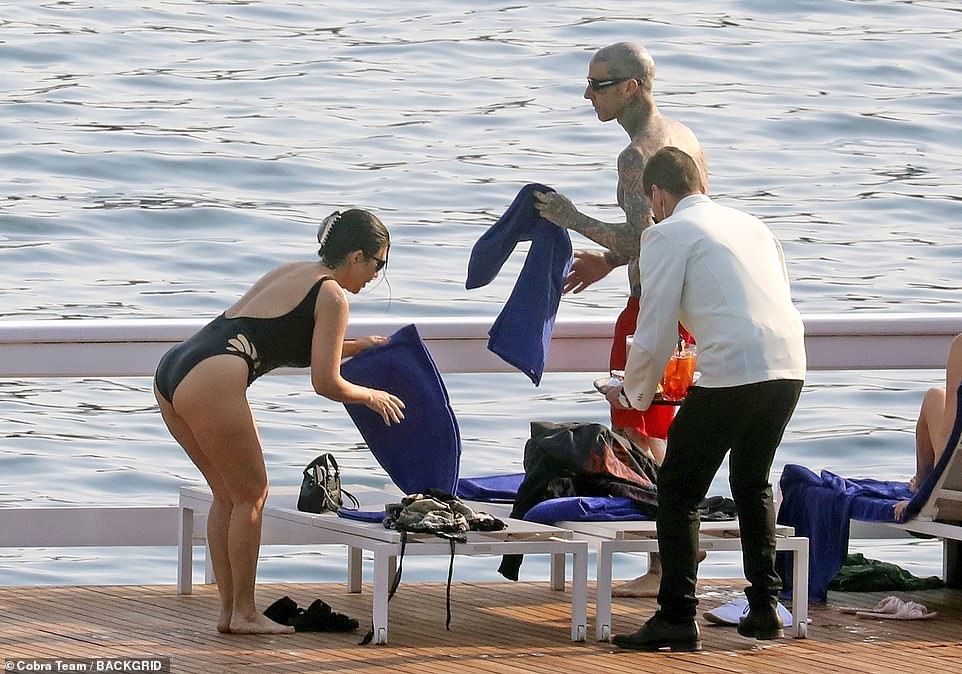 ABCDEFG – Goodbye! She reached for her towel while still soaking wet from her swim as the server put down the beverages 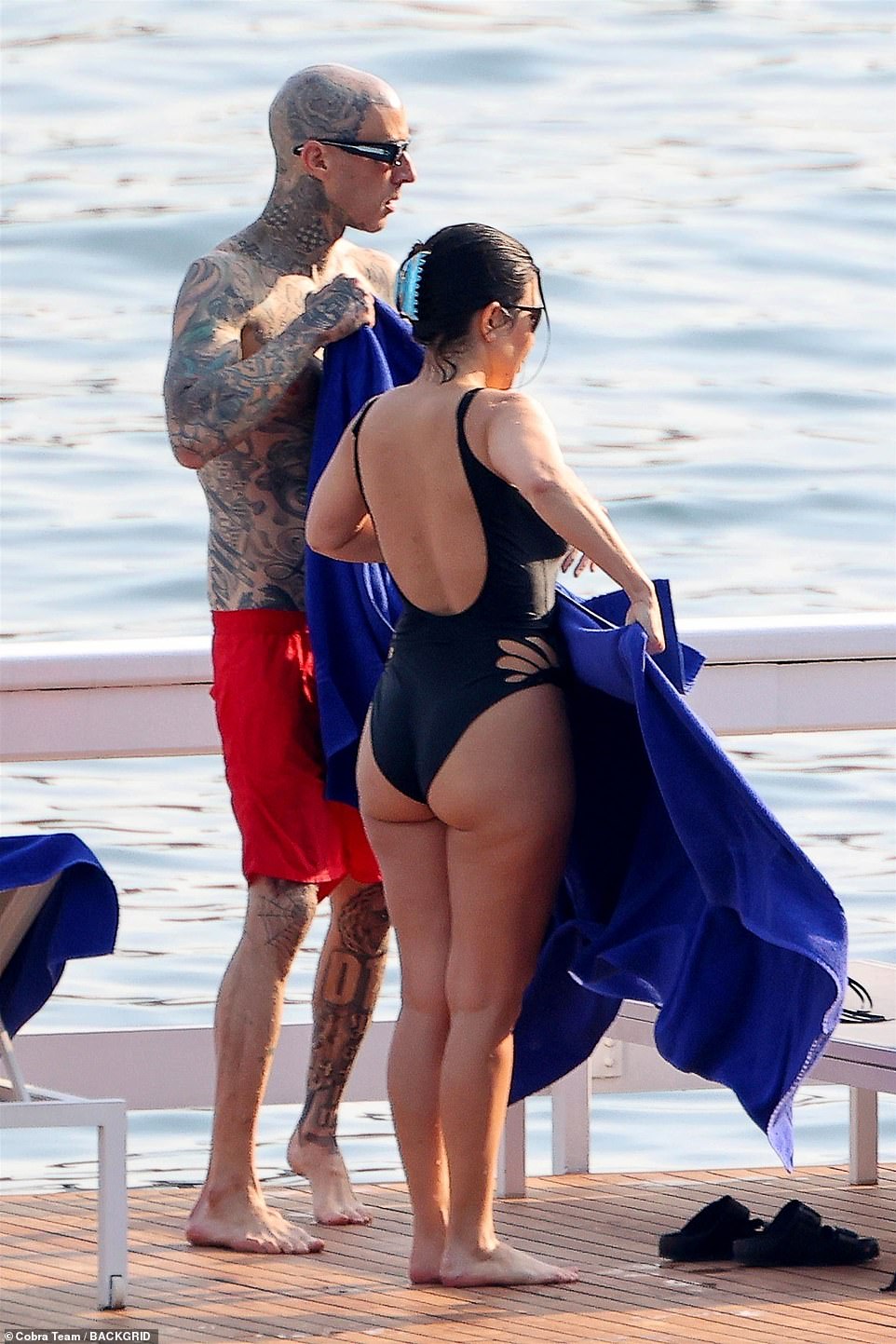 Let’s dry off now: They were both seen with royal blue towels after taking a dip in the pool

Struggling to hold back the tears, Kris told her eldest daughter: ‘It’s all happy.

‘I wish that your dad was here to see it. I can hardly believe that it’s the first time that she’s getting married. Isn’t that cute?’ 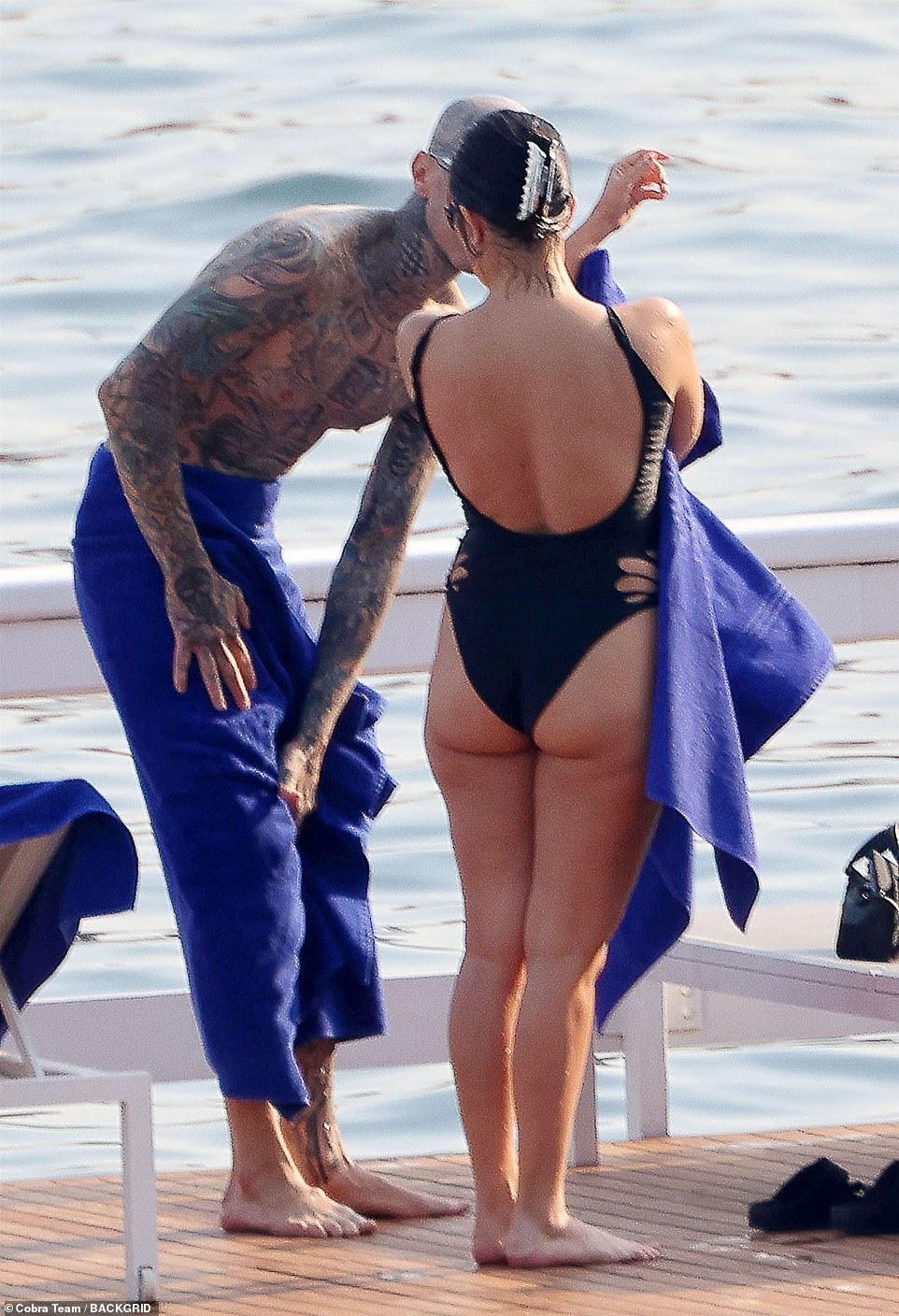 He is a kissing bandit 24/7! Barker went in for another kiss which Kourtney did not seem to mind one bit 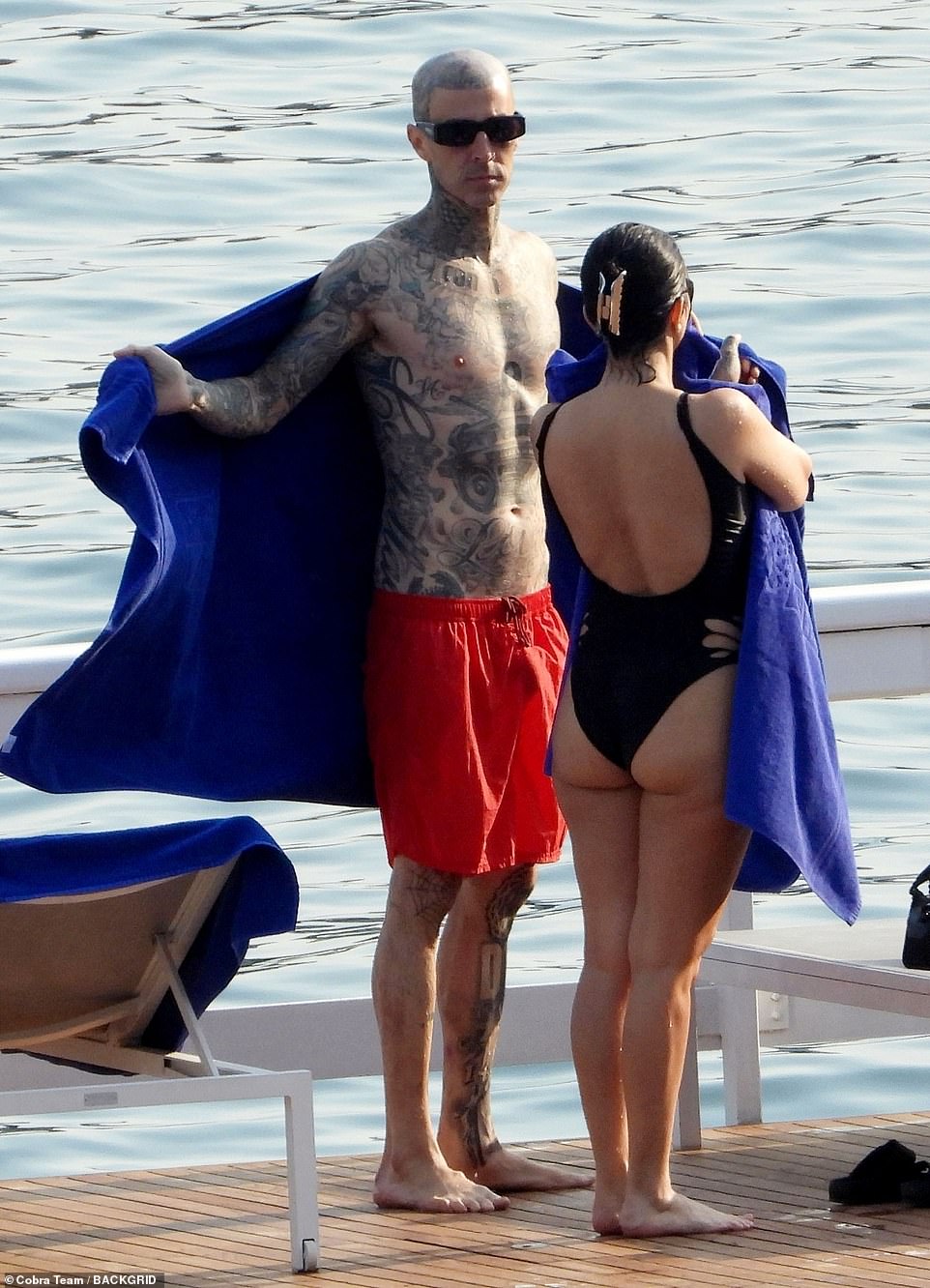 He loves his ink: Barker has a large collection of tattoos and will likely get many more as one of his lower legs was bare

The 41-year-old reality star – who is in a relationship with comedian Pete Davidson after filing for divorce from third husband Kanye West – quipped back: ‘While I’ve had enough for all of us.’

Travis popped the question in October, after less than a year of dating.

And while the loved-up pair were thought to have tied the knot during a ceremony at the One Love Wedding Chapel in Las Vegas recently, the wedding wasn’t legally binding.

That is because they did not obtain a marriage license.

However, the duo are said to want to host an ‘intimate ceremony’ with their loved ones. 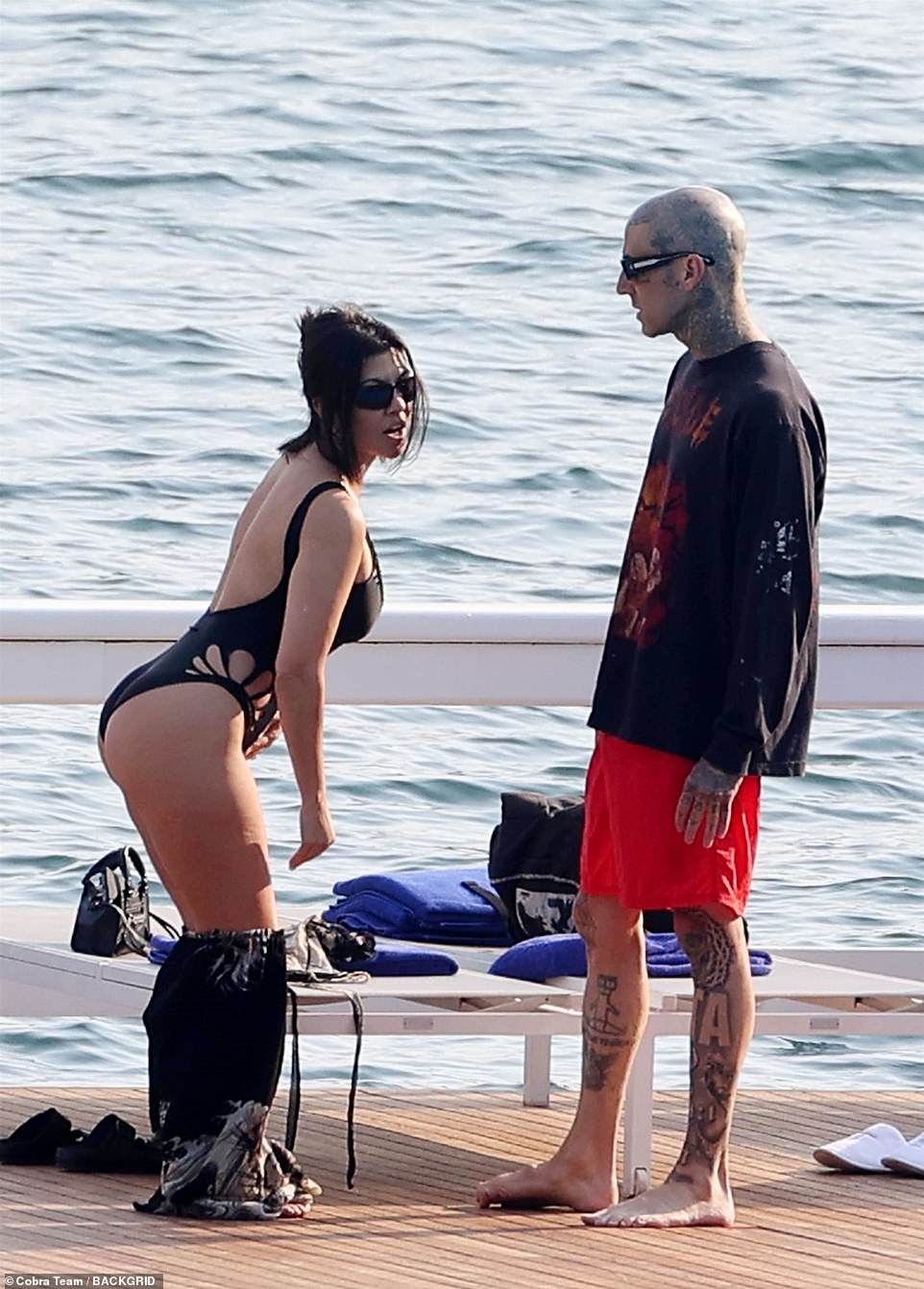 With some clothing on: Barker added a T-shirt as Kourtney had part of her slacks on by her knees 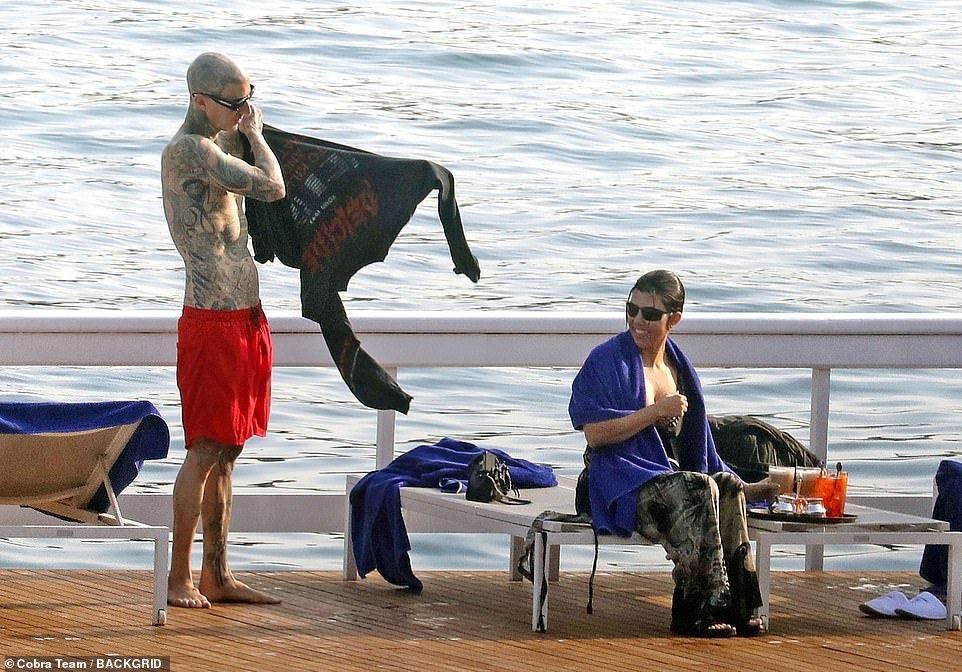 Is it time to go already? Kourtney reached for what looked like a coffee drink as she smiled at her man

A source said: ‘They don’t want a big wedding. They want an intimate ceremony and party for family and close friends.’

Kourtney hasn’t been married before, but she has Mason, 12, Penelope, nine, and Reign, seven, with ex-partner Scott Disick.

While Travis has Landon, 18, and Alabama, 16, with ex-spouse Shanna Moakler. 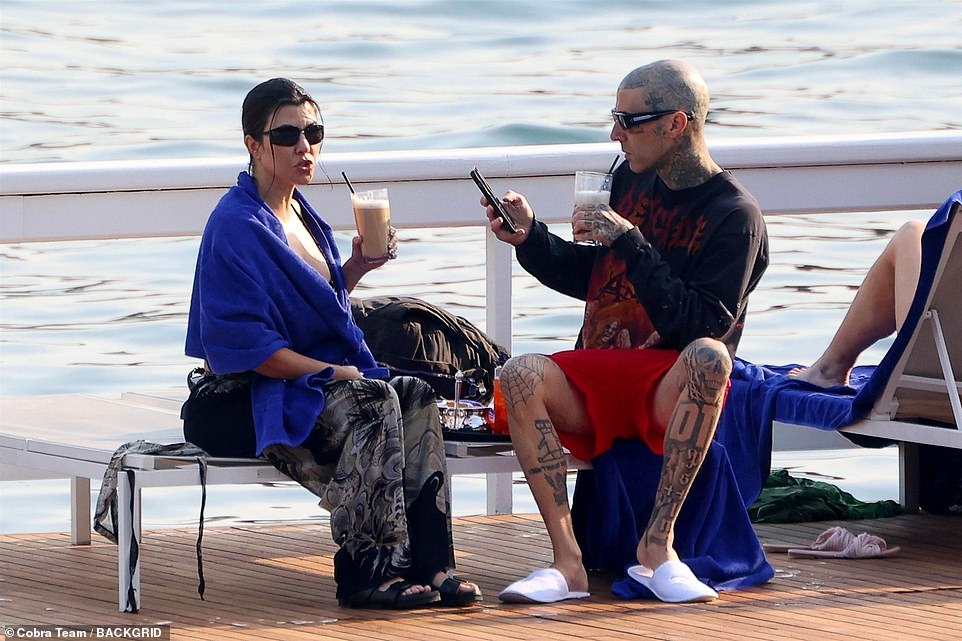 A little Java never hurt anyone: They sat side by side as they sipped from their coffee drinks 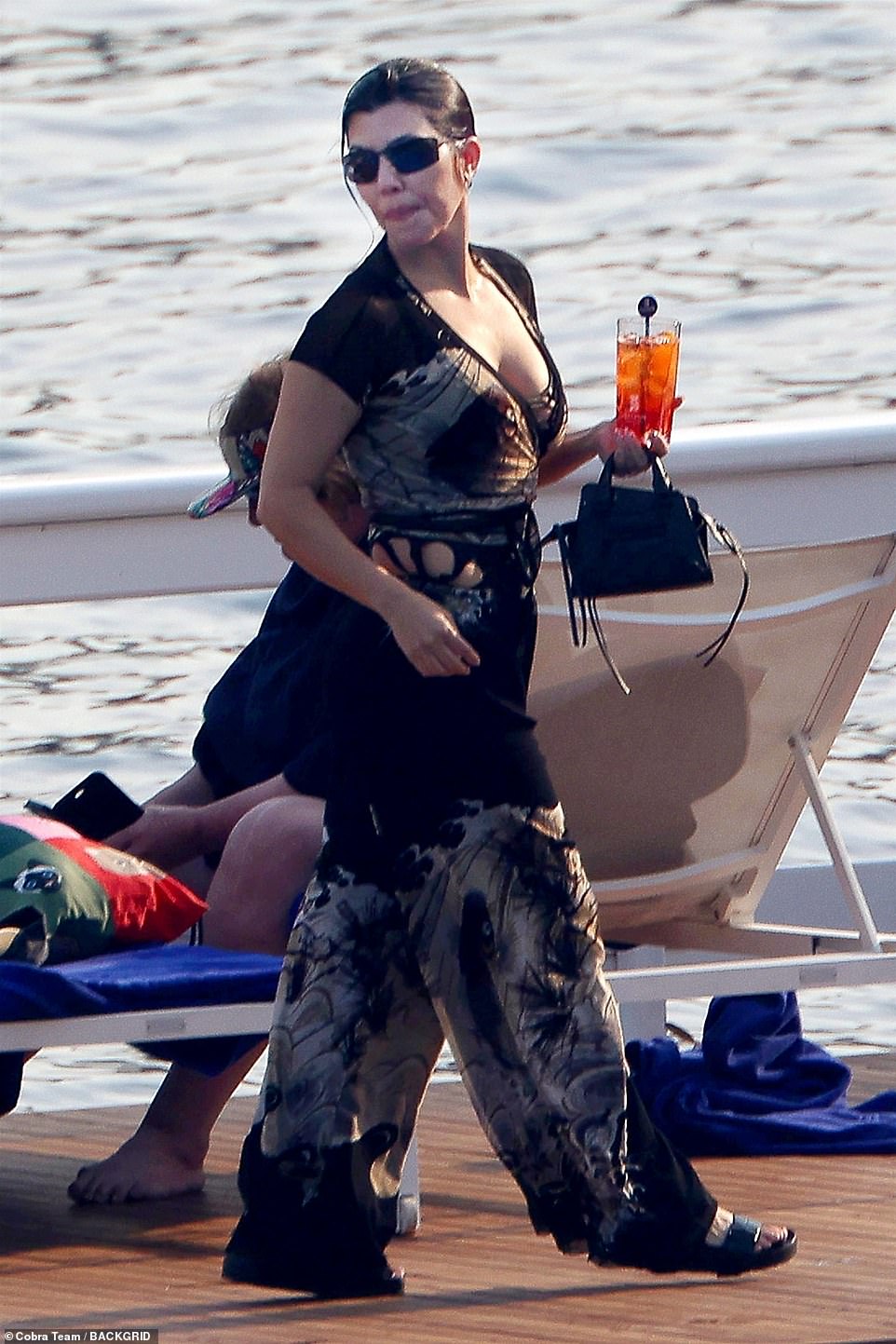 Drink number two: And the siren was seen with a red beverage after she was fully dressed

Kourtney and Travis are also trying for a baby and have been documenting their fertility journey on the show.

It looks like Monday could be a big night for all the Kardashian and Jenner ladies.

According to PageSix, Vogue editor in chief Anna Wintour has invited all of the family members from The Kardashians.

That includes Kourtney (who will attend with fiancé Travis Barker), Kim (who will bring beau Pete Davidson) and Khloe Kardashian as well as Kris, Kendall and Kylie Jenner (whose beau Travis Scott will most likely not attend).

Kim, 41, and Kendall, 26, have both posed for Vogue covers and attended the Met Gala several times. 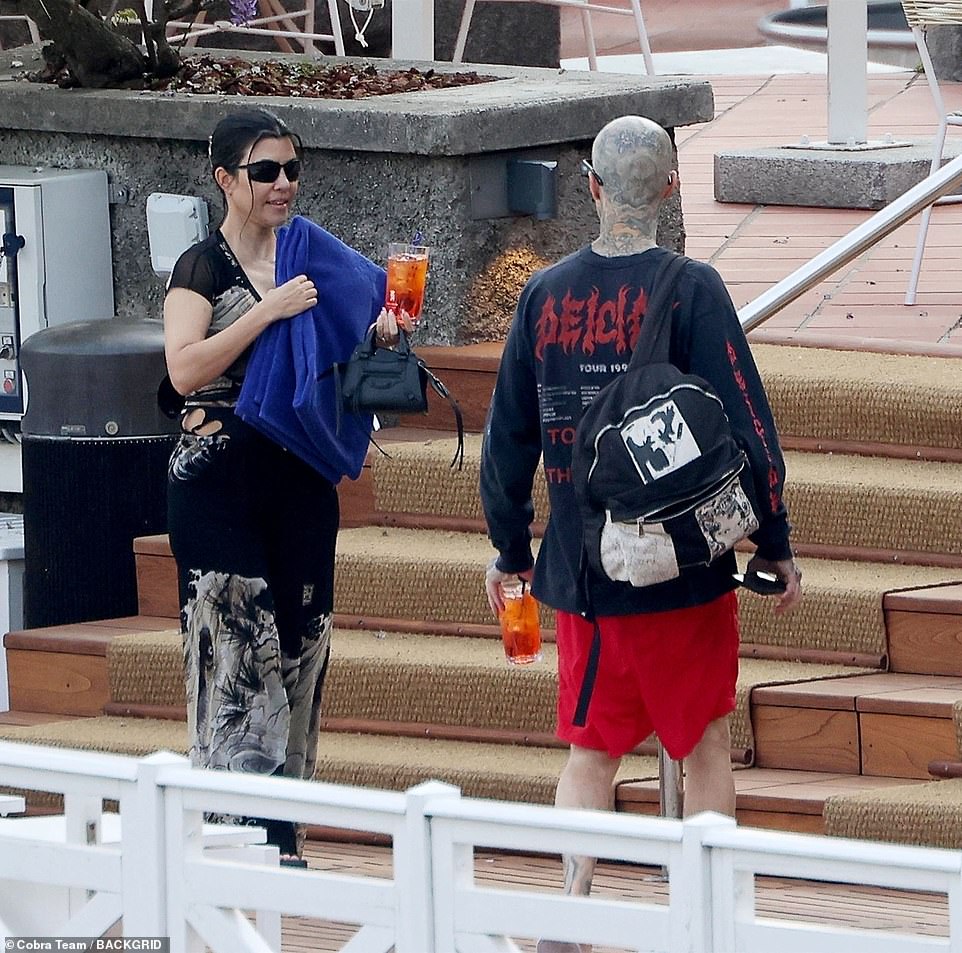 Not exactly cheerful spring fashion: Kourtney had on a black and white jumpsuit as Travis wore a black tour shirt

Rob Kardashian was likely not invited as he does not attend red carpet events.

He is also locked in a fierce legal battle with ex Blac Chyna (together they have daughter Dream) over the cancelation of Rob & Chyna.

But it is still not know who will for sure show.

This year’s theme is Gilded Glamour so expect gowns that look as if they are from the  Gilded Age.

According to Britannica.com, the Gilded Age is a period of gross materialism and blatant political corruption in U.S. history during the 1870s that gave rise to important novels of social and political criticism.

The Metropolitan Museum of Art Costume Institute Benefit, also known as the Met Gala, is considered by many as the ‘Super Bowl of celebrity red carpets.’

Fashion’s biggest night is traditionally held the first Monday in May to raise money for the Costume Institute in New York City, with last year’s event moved to September due to the pandemic. 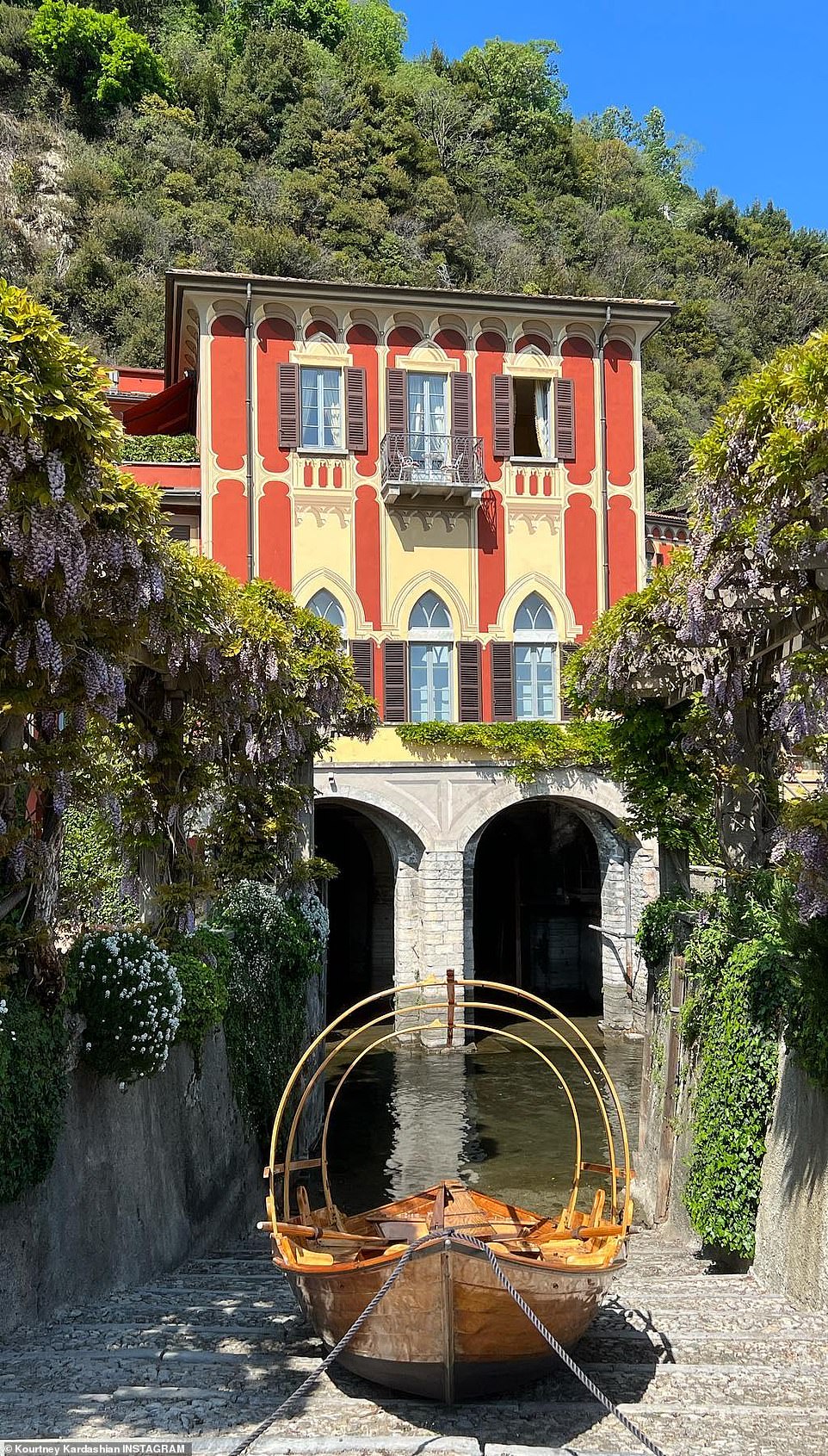 Final visits: Getting the most out of their holiday, Kourtney shared some Instagram stories from Lake Como before they left on Saturday morning 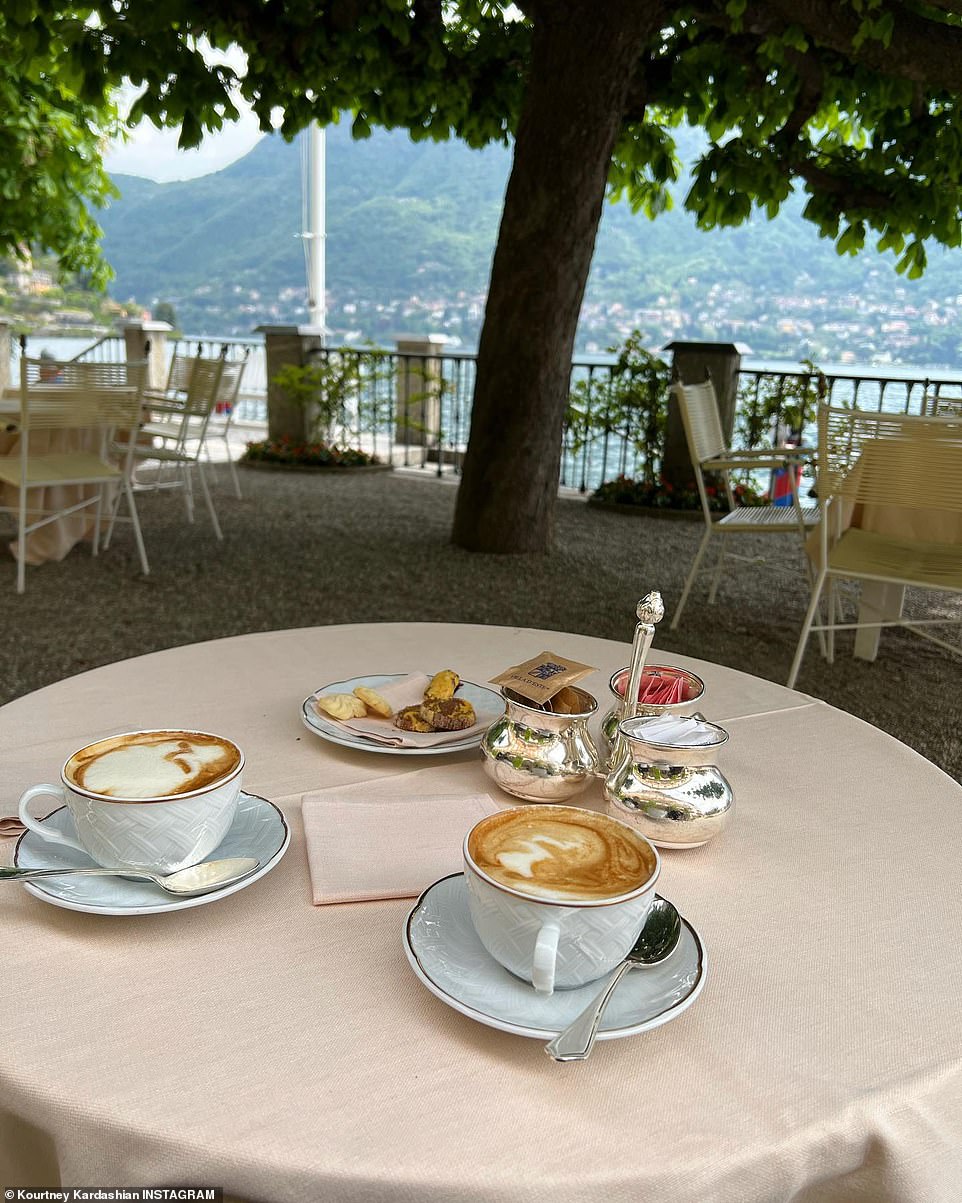 So many coffee breaks in this paradise: The looker also shared an image of the cappuccinos and cookies they were served 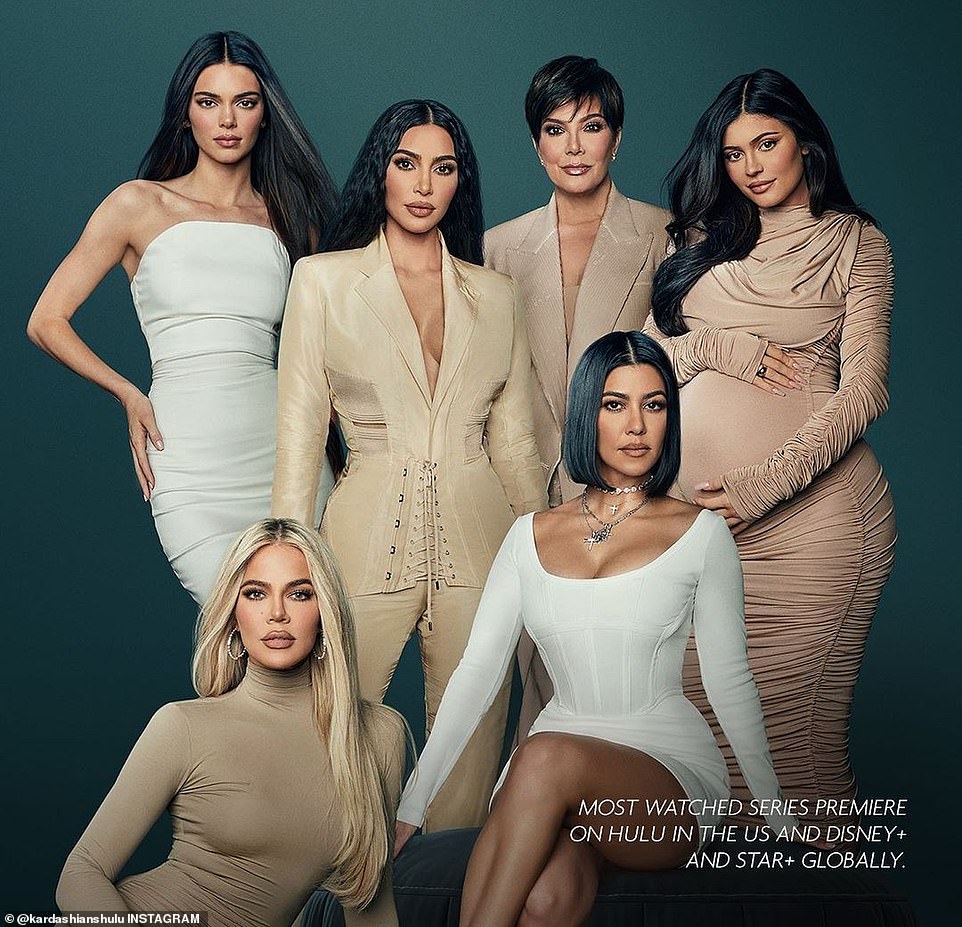 Thanks Anna, it’s about time! It looks like Monday could be a big night for all the Kardashian and Jenner ladies. According to PageSix, Vogue editor in chief Anna Wintour has invited all of the family members from The Kardashians