Christmas Day was full of celebrity couples sharing snippets of their day together.

But Kris Smith and his new girlfriend Sarah Boulazeris may just be the most adorable of the bunch, as they took to social media to flaunt their affection for each other.

In a variety of posts on Sarah’s Instagram Stories throughout the day, the couple appeared to be enjoying their day together – including in a video where they recreated The Lady And The Tramp’s most famous scene.

Is this the cutest celebrity couple this Christmas? Loved-up Kris Smith and Sarah Boulazeris adorably re-enact The Lady And The Tramp on social media on Monday

Munching down on the same strand of pasta, the smitten pair got closer and closer in a moment reminiscent of the classic cartoon movie.

Sarah poked fun at her male model beau, writing ‘lady’ with an arrow pointing to herself, while Kris was labelled the ‘tramp’.

The genetically blessed duo also did their own version of a trademark loved-up selfie, pulling faces at the camera, with Sarah captioning it: ‘Christmas couple shot. #nailedit’. 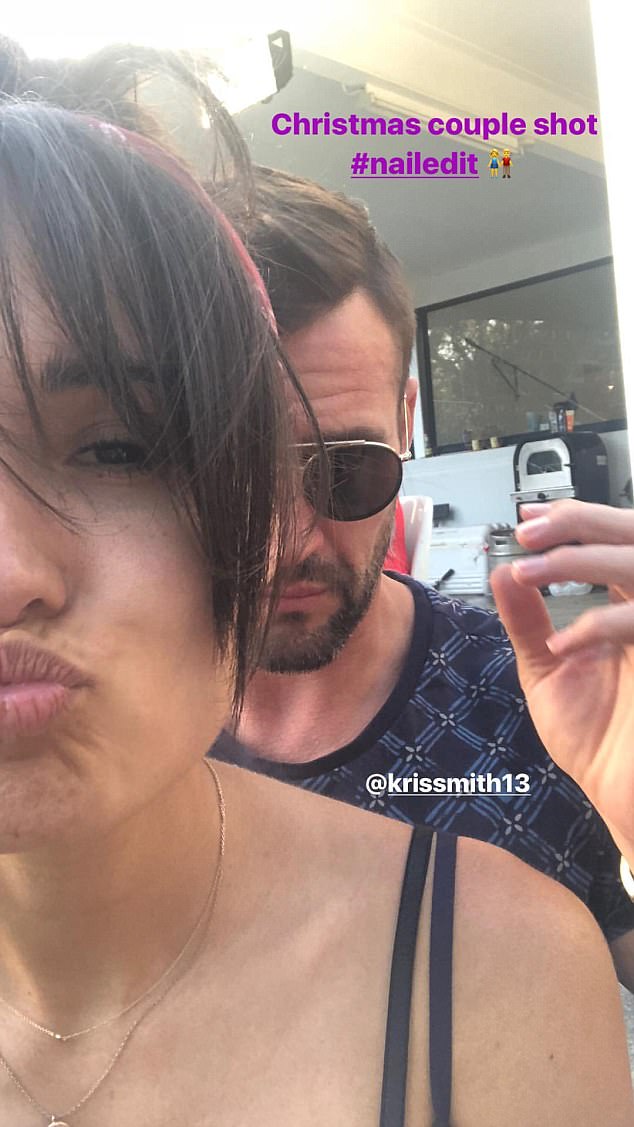 Nailed it! The smitten couple also pulled faces at the camera during their ‘Christmas couple shot’

A more smiley version appeared on Kris’ Instagram page, with the pair cosying up to one another while NRL star Billy Slater could be seen sneakily photobombing in the background.

‘[Sarah] said let’s get a nice Christmas pic! I think me and [Billy Slater]  nailed it,’ Kris joked, before adding:  ‘[Sarah], you need to raise your pose game.’

The Nerf gun, which featured in the couple shot also made an appearance on Sarah’s Instagram Story as the two indulged in a game. 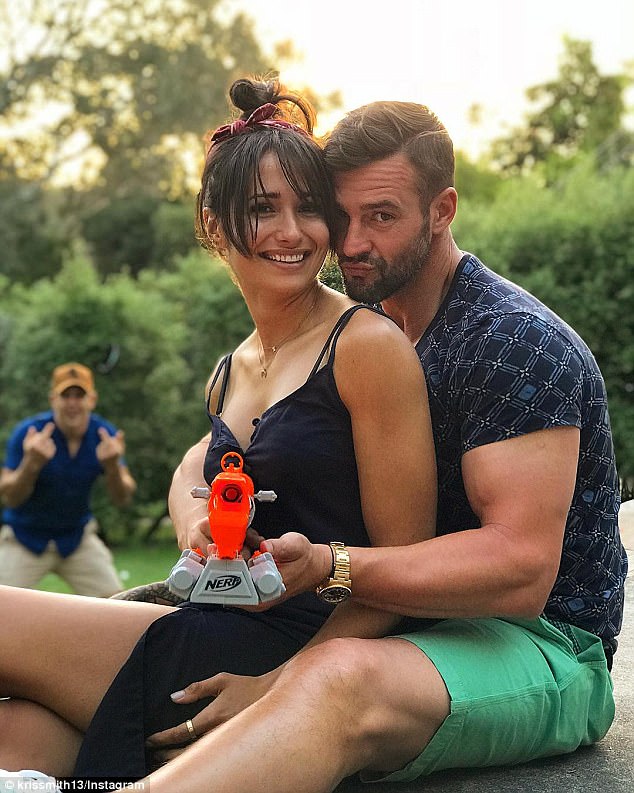 Photobomb! Sarah and Kris had the limelight stolen by NRL star Billy Slater (left) in their ‘nice Christmas pic’ 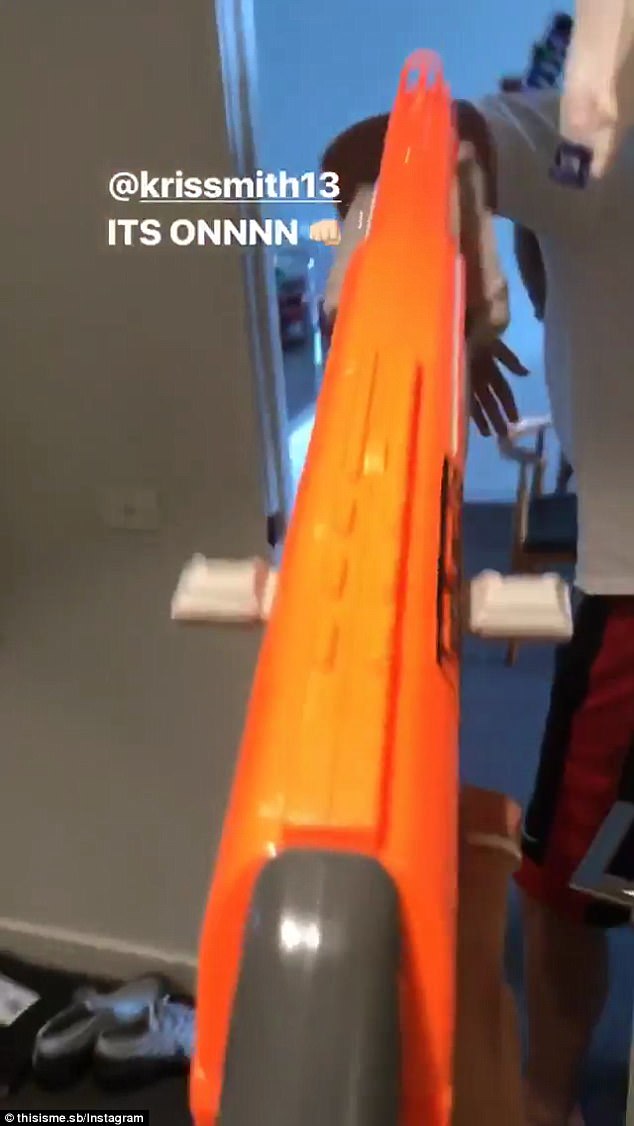 ‘It’s on!’ The pair also appeared to indulge in game playing with Nerf guns

The fun and games didn’t end there for the happy couple and Billy, with the three mates channelling their inner children as they rode go-karts down the driveway.

In a video featuring Kris, Sarah wrote ‘mario kart eat your heart out’, while Billy’s version showed the sportstar getting a push from the Myer Ambassador.

Then it was Sarah’s time to shine as she gave the activity a crack, writing,’Right BOYS move over! Coming in HOT!’

‘Mario kart eat your heart out’: The trio channelled their inner children as they rode go-karts down the driveway 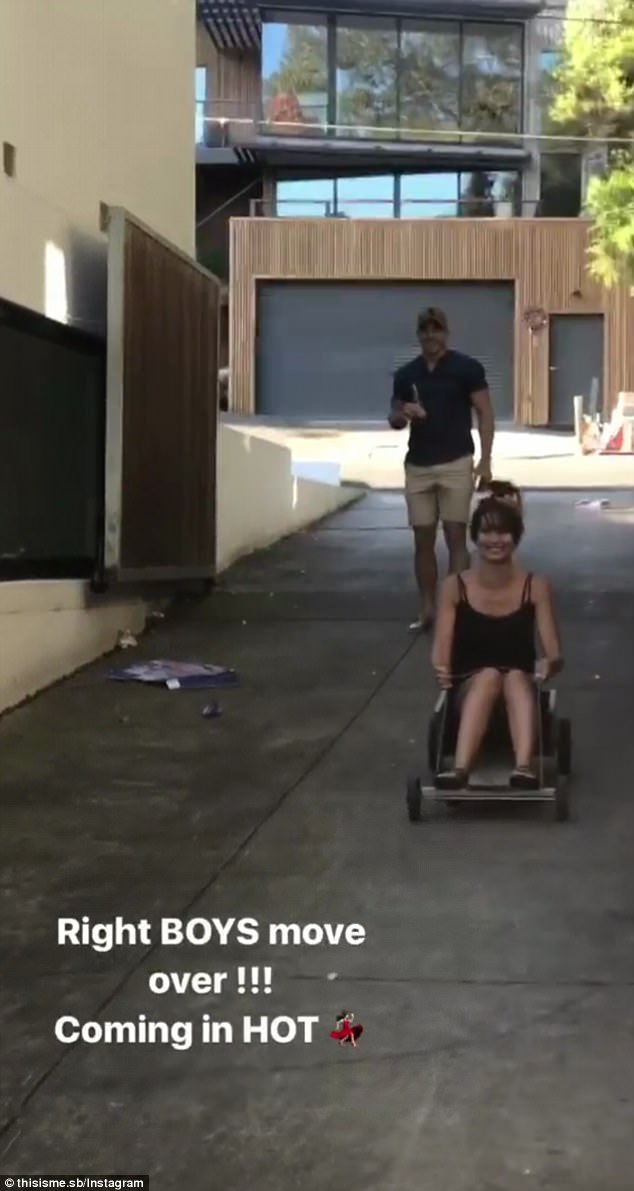 ‘Right boys move over!’ Sarah gave the men a run for their money when she gave the activity  a crack