Kristen Bell shares emotional goodbye to her pet pooch Barbara in a series of photos: ‘We love you’

Kristen Bell is mourning the loss of one of her four-legged family members.

The Forgetting Sarah Marshall actress took to Instagram on Friday and revealed that she and her family said their final goodbyes to their beloved pooch after Barbara.

The little dog, who was adopted two years ago, recently fell ill with Giardia, a potentially dangerous single-celled parasite that causes a diarrheal disease and intestinal infection known as giardiasis.

‘Our beautiful @barbarabiscuits got sick this weekend. Vet diagnosed Giardia, and it looked like for a while like Barb was gonna pull through,’ she began in a series of posts to her Instagram Stories.

‘Even though Barb is a (gorgeous) fighter, shes gone septic and her lil body doesn’t look like it’s gonna pull through,’ she wrote in another post along with a photo of the tiny dog. 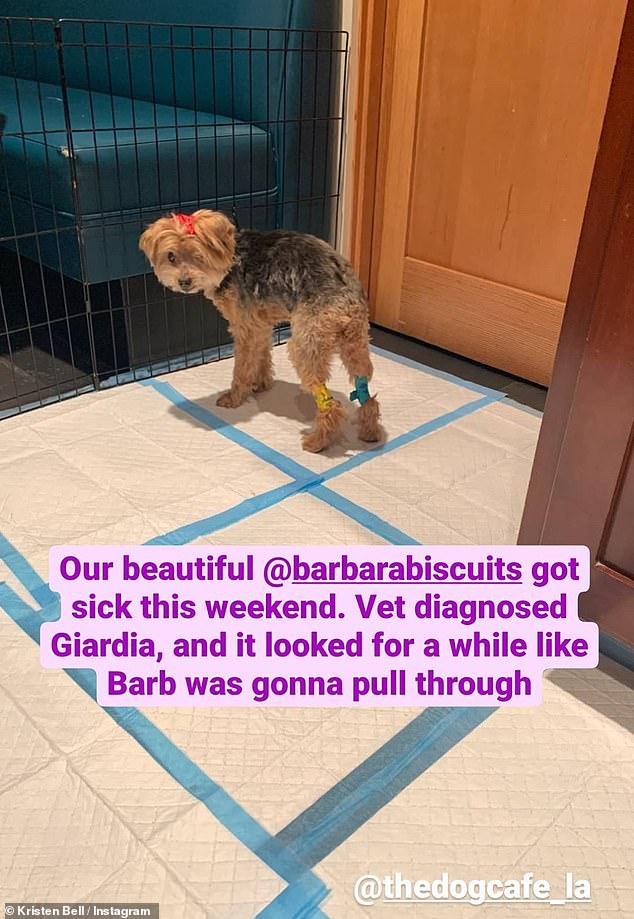 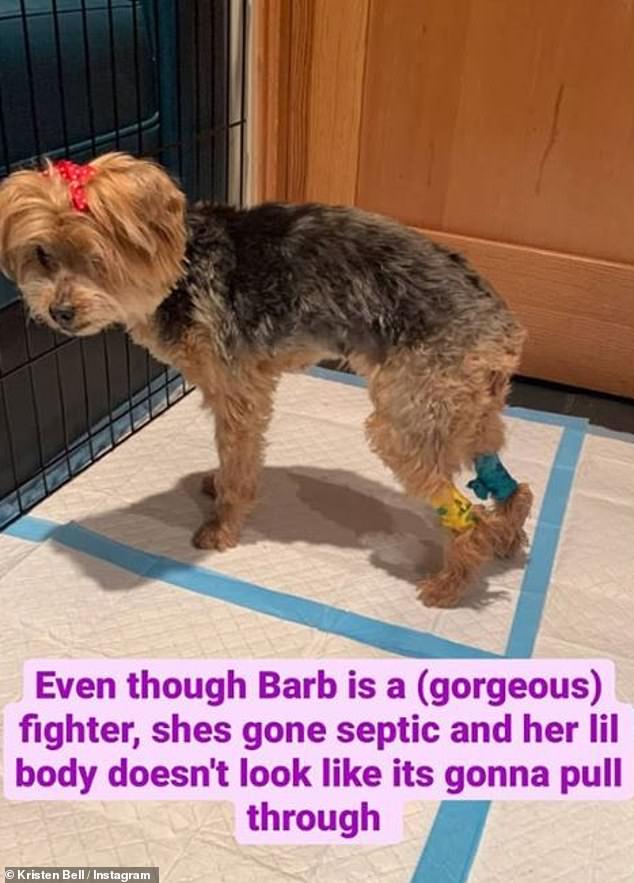 ‘On our way now to say goodbye,’ Bell confessed with obvious sadness along with a selfie photo of herself with tears in her eyes.

‘Trying to stay super grateful for the 2 years we got to spoil her like the Queen that she is.’

The actress also gave thanks to The Dog Cafe in Los Angeles for ‘bringing her into our lives’ before sharing some photos from the veterinary clinic.

In one heartbreaking photo, Bell’s five-year-old daughter Delta can be seen petting Barbara as she’s hooked up to several tubes.

There’s another showing Bell looking incredibly sad as she’s face-to-face with her doggie while wearing a protective mask amid the still ongoing COVID-19 pandemic.

‘We love you Barbara,’ the mother of two wrote. 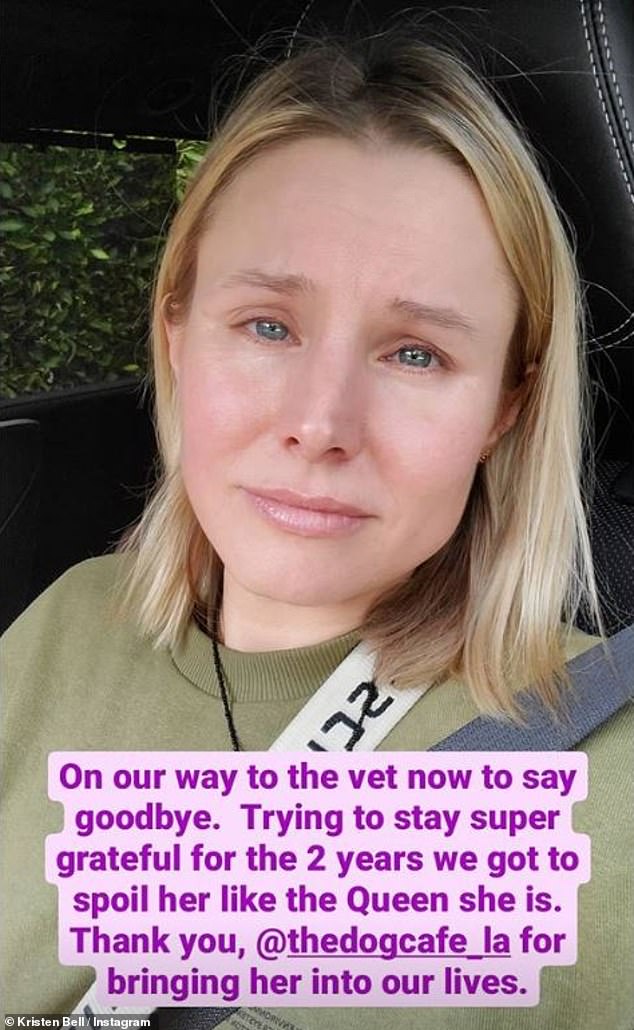 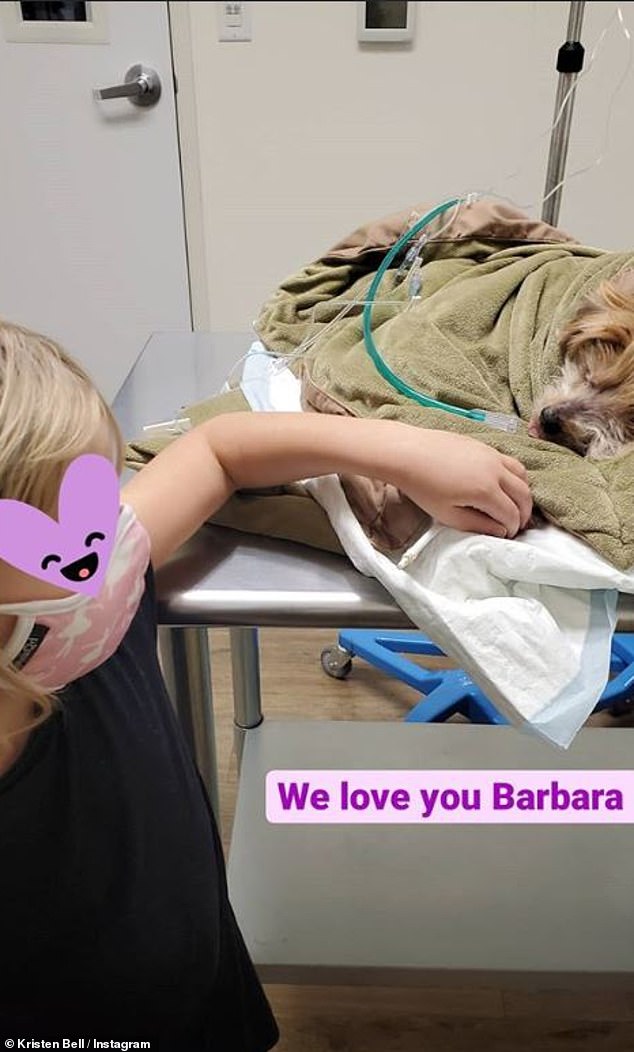 A child’s love: In one photo, Bell’s five-year-old daughter Delta can be seen petting Barbara as she’s hooked up to several tubes

Bell and her husband Dax Sheppard have adopted several dogs over the past few years.

Just over a week ago, the Michigan native posted an adorable photo of Sheppard laying in bed looking at his phone while their dog Frank laid next to him with his head on a pillow.

‘My 2 favorite guys,’ she wrote in the caption.

The couple also have a seven-year-old daughter Lincoln.

Giardia is particularly dangerous for puppies, senior dogs, and dogs with compromised immune systems, according to the Centers for Disease Control and Prevention 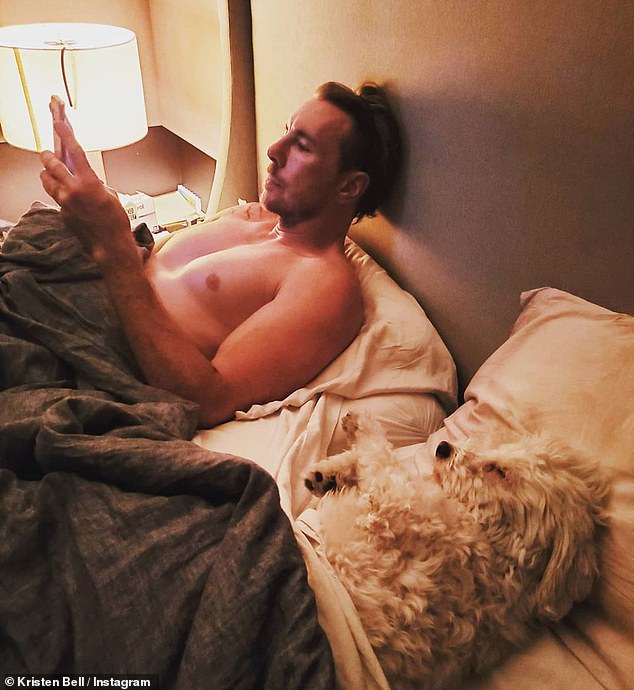 Four-legged family members: Just over a week ago, Bell posted an adorable photo of Dax laying in bed looking at his phone while their dog Frank laid next to him with his head on a pillow.