She’s enjoying a Mexican beach vacation with her children.

And Kristin Cavallari is clearly having a good time if her latest Instagram post is anything to go by.

The reality TV star, 34, shared a photo in which she’s seen posing next to a statue of a large figure wearing a hat and holding a broom and in the caption, she joked: ‘Date night.’

Fun time: Kristin Cavallari posed next to a statue of a large figure wearing a hat and holding a broom during her Mexican beach vacation Monday and in the caption, she joked: ‘Date night’

She paired the flirty frock with strappy black sandals and black-framed sunglasses..

Her blonde hair was loose and she accessorized with several necklaces and a pair of earrings.

Later she posted more images to her Instagram Story including a close-up of her cleavage-baring outfit and a snap in which she’s seen holding a glass of red wine. 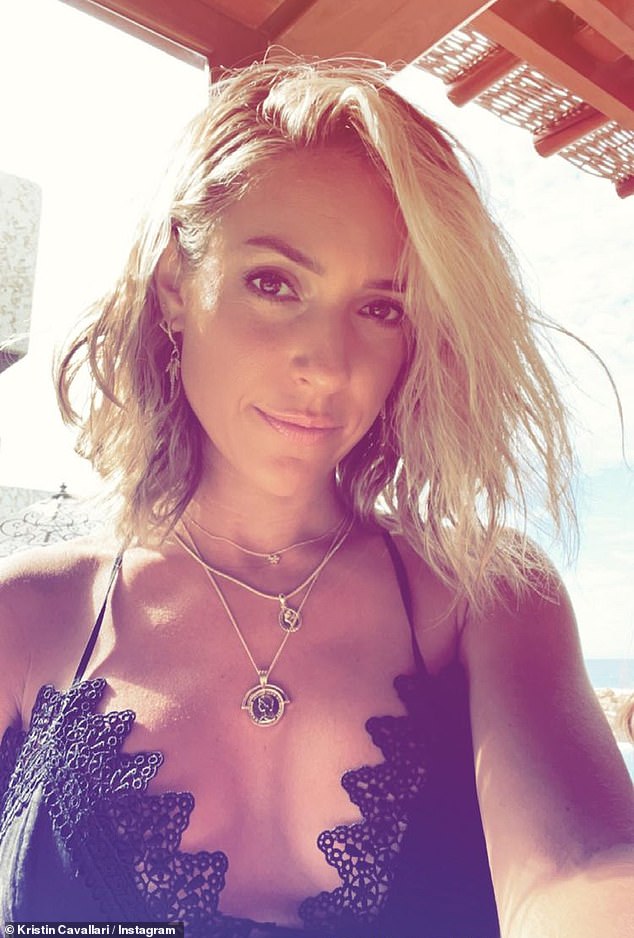 Flirty: The reality TV star, 34, looked gorgeous in a low-cut black dress with spaghetti straps and lace detailing and showed off her cleavage on her Instagram Story 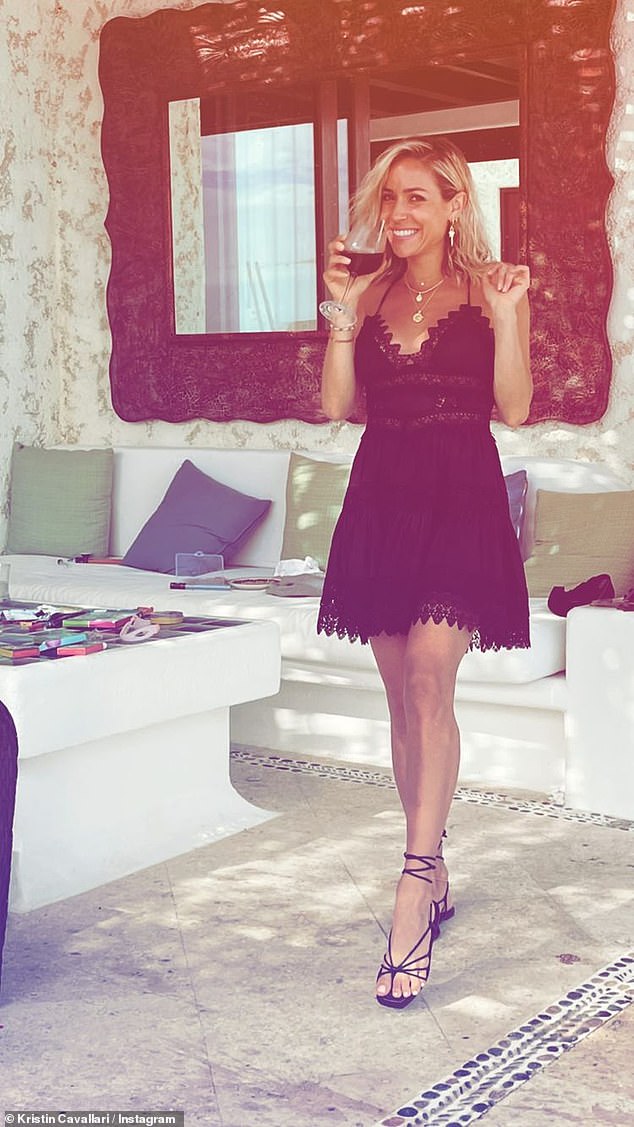 Ready to party: Cavallari also shared a snap in which she’s seen holding a glass of red wine

Cavallari is a single mom after splitting from husband Jay Cutler last year after seven years of marriage.

On Sunday, the Laguna Beach: The Real Orange County castmember shared a photo of herself holding Saylor while in a swimming pool grotto at the Cabo San Lucas resort. 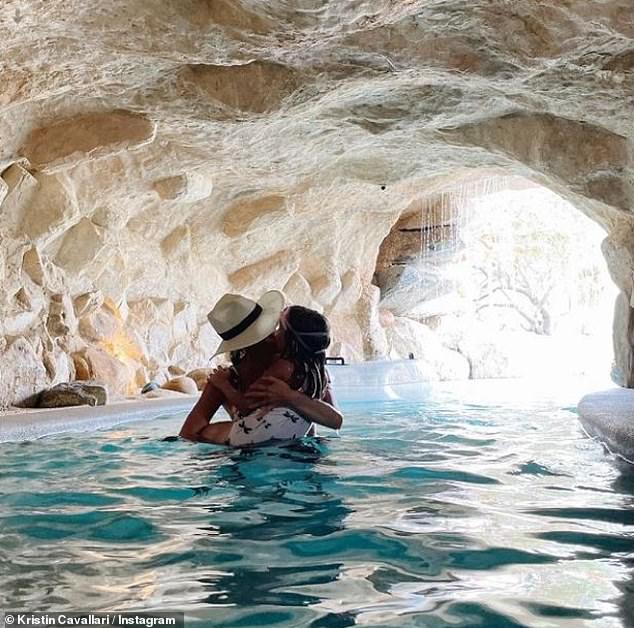 Pool time: She is at a Cabo San Lucas resort with the children she shares with ex-husband Jay Cutler – Camden, eight, Jaxon, seven, and daughter Saylor, five (pictured with her)

The TV personality also shared several videos and snaps to her Instagram Story to let her fans know how her tropical getaway was going.

Her first entry showed Camden and Jaxon playing on a beach while ‘patiently waiting for the fireworks.’

She later included a video of the display and shared a loop of herself posing in front of it all while wearing a pink-and-white tie-dye sweater. 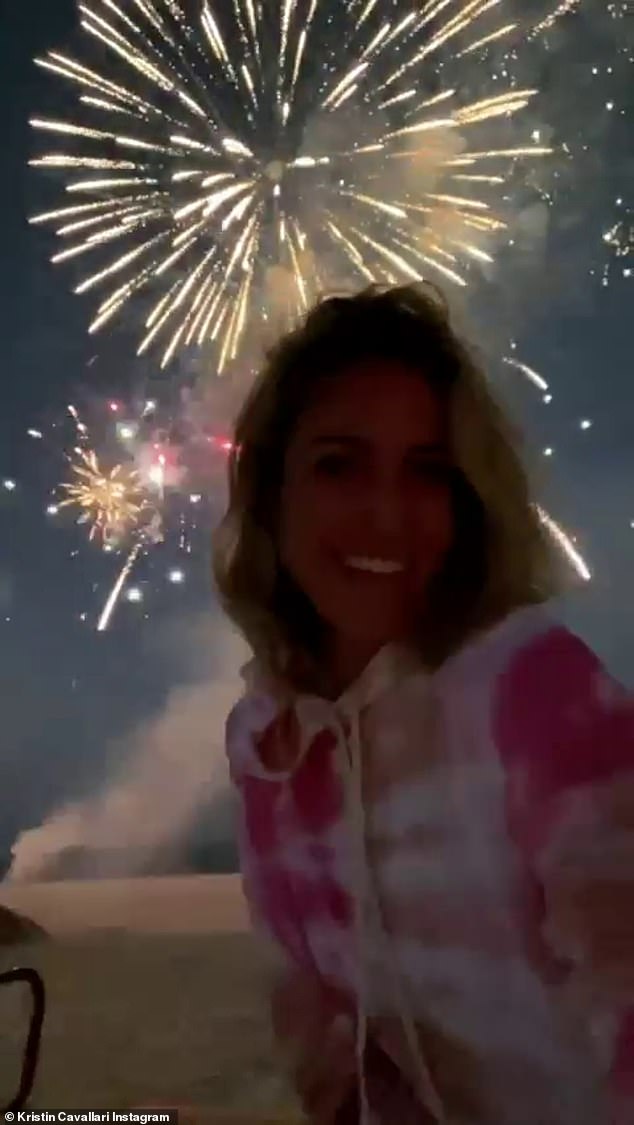 Beach getaway: The TV personality has been keeping her fans updated on the vacation and shared snaps from a firework display on the sand 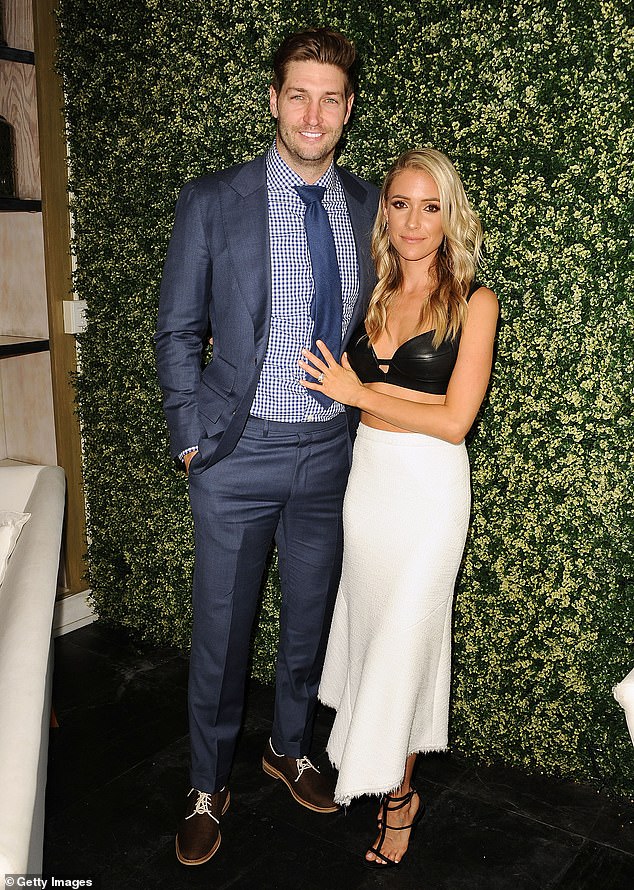 Exes: Cavallari is a single mom after splitting from former NFL quarterback Cutler in April 2020 after seven years of marriage (they’re pictured in 2017)