Chicago Bears right guard Kyle Long was simply getting undressed after Monday’s win over Washington when the naked NFL veteran was unexpectedly joined by a quarter million pairs of eyes.

Bears running back Tarik Cohen posted a celebratory video from the team locker room following Monday’s 31-15 pounding of the Redskins. What he didn’t realize was that his footage included about 10 seconds of Long, whose genitals were inadvertently broadcast around the world as he unfurled a towel and walked to the shower.

Although Cohen was quick to pull the video offline, Twitter users managed to get grab of the offending shots, which quickly went viral. 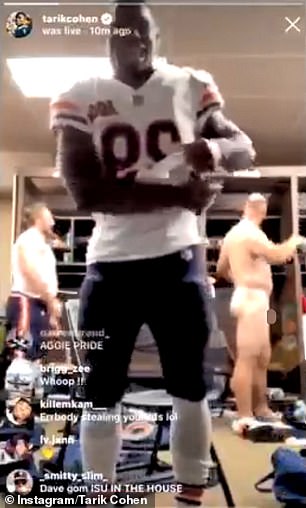 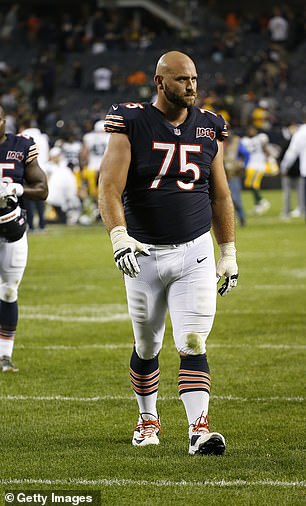 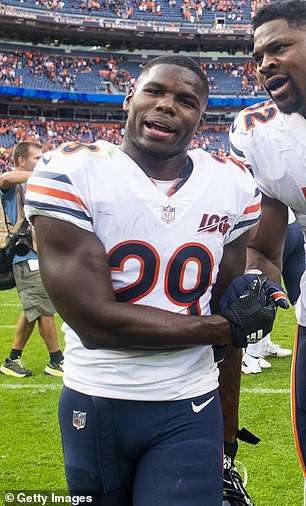 Bears running back Tarik Cohen (right) posted a celebratory video from the team locker room following Monday’s 31-15 pounding of the Redskins. What he didn’t realize was that his footage included 10 seconds of Kyle Long (left), whose genitals were being broadcast around the world as he unfurled a towel and walked to the shower

Another made the opposite joke: ‘Kyle Long? More like Kyle SHORT.’

But most of the input on social media took the form of a warning: ‘lol uh if Kyle Long starts trending do yourself a favor and don’t try to figure out why.’

This is not the first time an NFL player’s naked body has been caught on camera in the locker room.

In 2015, several unsuspecting Cincinnati Bengals players ended up on camera when the NFL Network conducted an interview with cornerback Adam ‘Pacman’ Jones in the locker room. 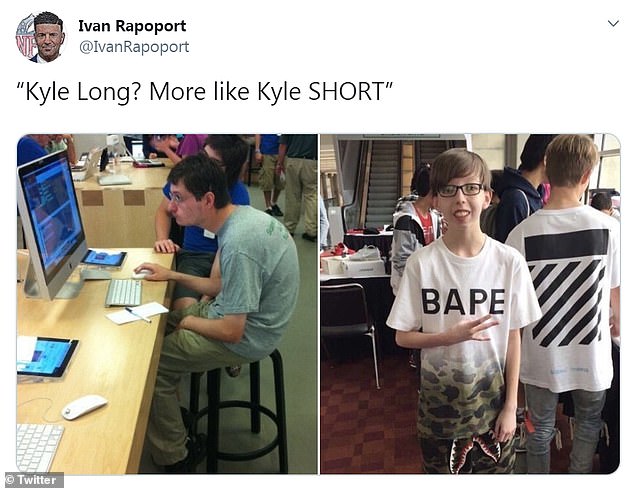 Since then the NFL has taken steps to ensure players’ privacy, but social media has presented more challenges.

Now-former Pittsburgh Steelers wideout Antonio Brown got in trouble in January of 2017 for putting a post-game speech made by his then-coach Mike Tomlin on Instagram.

Brown, who is now a free agent after being released by the New England Patriots on Friday, apologized on social media a day later.

‘First, I’d like to take this opportunity to say that I’m sorry for my actions and behavior after Sunday’s game,’ he wrote. ‘I let my emotions and genuine excitement get the best of me, and I wanted to share that moment with our fans.

‘It was wrong of me to do, against team and NFL policy, and I have apologized to Coach Tomlin and my teammates for my actions. I’m sorry to them for letting it become a distraction and something that they’ve had to answer questions about while we’re preparing for a big game on Sunday.’

Players are not actually allowed to make social media posts until 90 minutes after games.