Kylie Jenner’s daughter Stormi may only be four-years-old, but she’s already showing a sense of comedic timing.

On Thursday, the Kylie Cosmetics founder teamed up with her little girl in a TikTok video with grandma Kris Jenner.

The video was captioned: ‘pov [point of view] being the coolest in the family’

Hilarious: Kylie Jenner and daughter Stormi showed off their comedic skills by teaming up for a TikTok video

The trio lip-sync to an audio clip of Kris declaring: ‘It’s really draining… It’s emotionally, physically and spiritually exhausting to be going through this.’

The soundbite is taken from a recent episode of The Kardashians where Kris was discussing the family’s lawsuit with Blac Chyna. 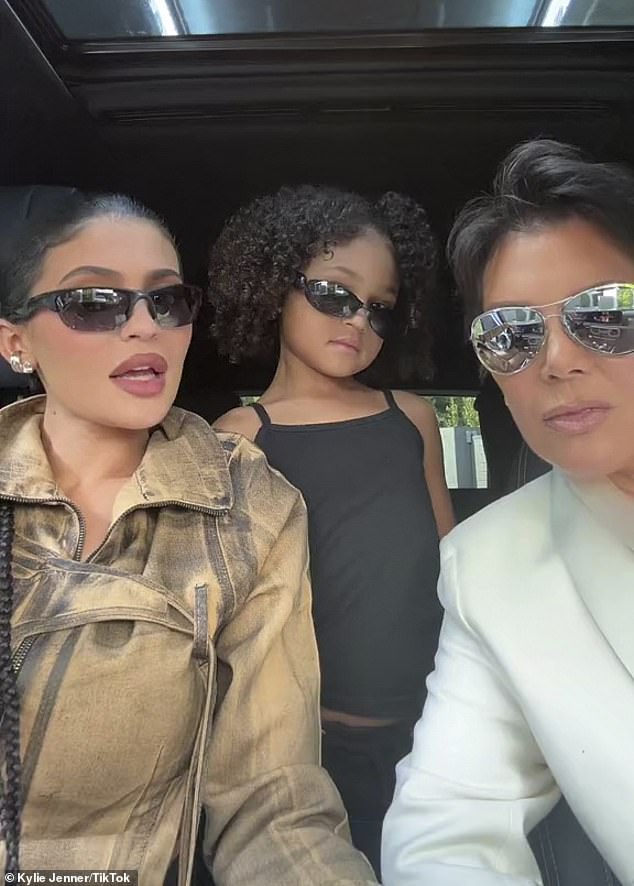 ‘Pov being the coolest in the family’: The trio lip-synched to an audio clip of Kris Jenner, saying:  ‘It’s really draining… It’s emotionally, physically and spiritually exhausting to be going through this’

Again, both mother and daughter, who also wore dark sunglasses, mouthed along with grandma for the second line of her statement, and still without her even knowing it.

Fresh from making a splash at Paris Fashion Week, Kylie did her best not to break out into laughter, while looking stylish in a brown leather jacket and skirt combination, and her long raven tresses pulled back in a slick-back look.

At a certain point, while staring forward, the cosmetics mogul had a sly smile that she did her best to keep under wraps.

Showing she’s nearly a pro, Stomi also did great in hiding their antics, but there was one moment where she leaned closer to her mom and grandma and started adding a little head bob and body language to her routine. 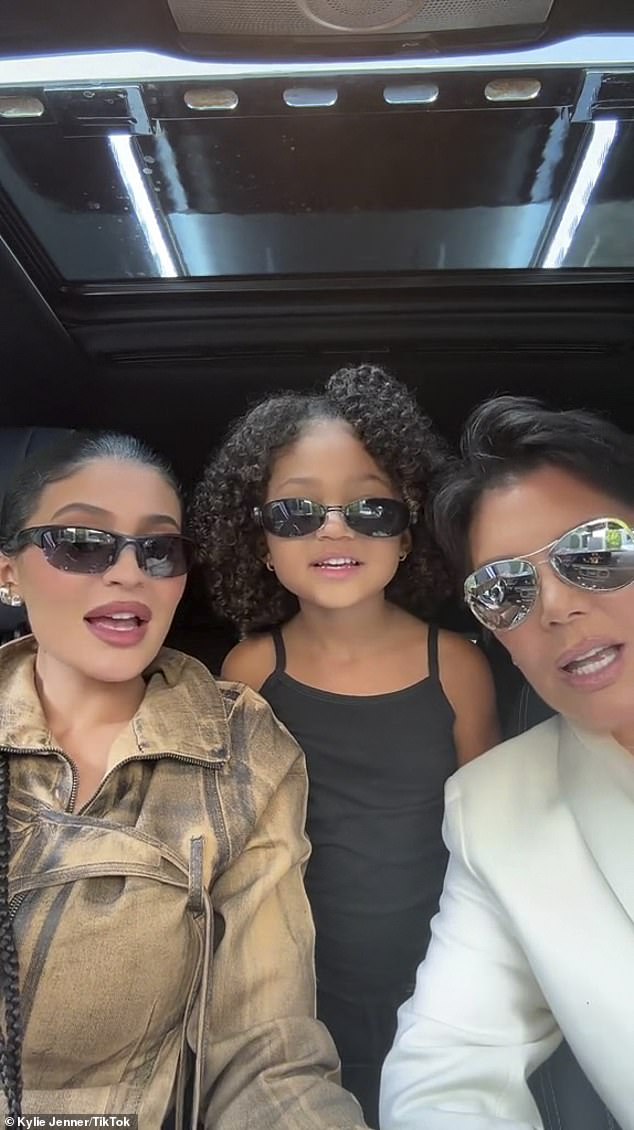 She’s a pro: Stomi did great job in hiding their antics, but there was a moment when she leaned closer to her mom and grandma and started adding some body language like a head bob

For the clip, the oldest of Kylie’s two children, whom she shares with on-again, off-again partner, Travis Scott, looked adorable in a black tank top, matching cargo pants and sneakers, and her curly locks in a bob cut with a center part.

Eventually on Thursday, Kylie and Stormi went their separate way and headed off to The Ivy in Beverly Hills for lunch.

The fashionable duo were spotted moments after parking their SUV as the made she short walk to the upscale restaurant.

Missing from all the shenanigans in the video was Kylie’s eight-month-old son that she also shares with Scott.

The fashionista had only just returned back to her Calabasas home in California a couple of days ago after attending a number of events at Paris Fashion Week. 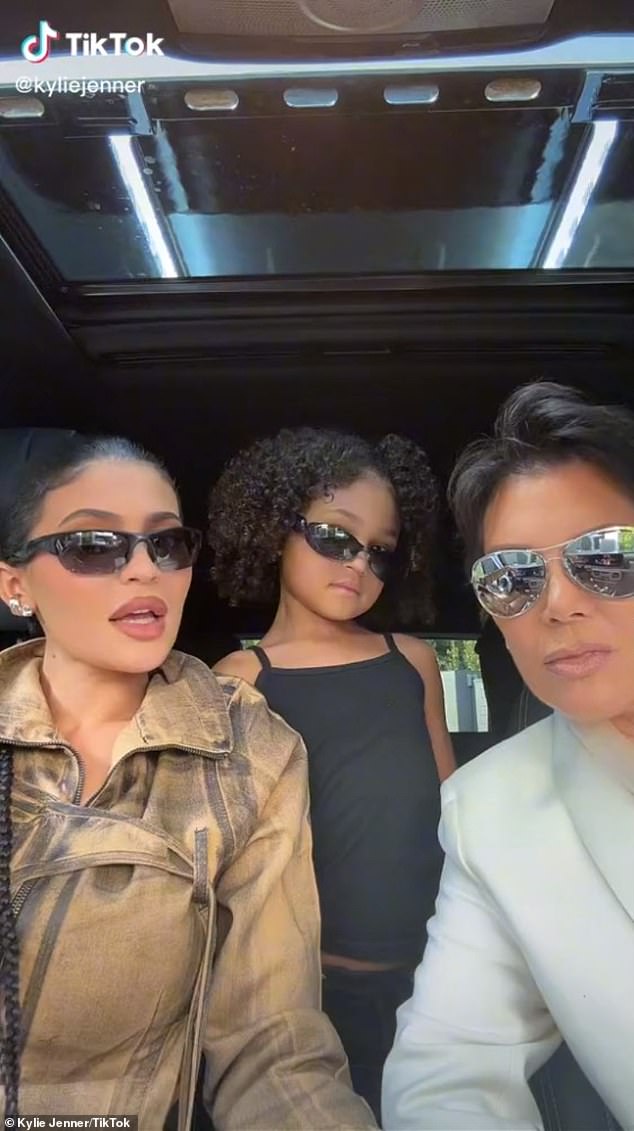 Mimics: Both Kylie and Stomi continue to mouth Kris’ words nearly to a tee, and seemingly without her ever knowing it was all going down 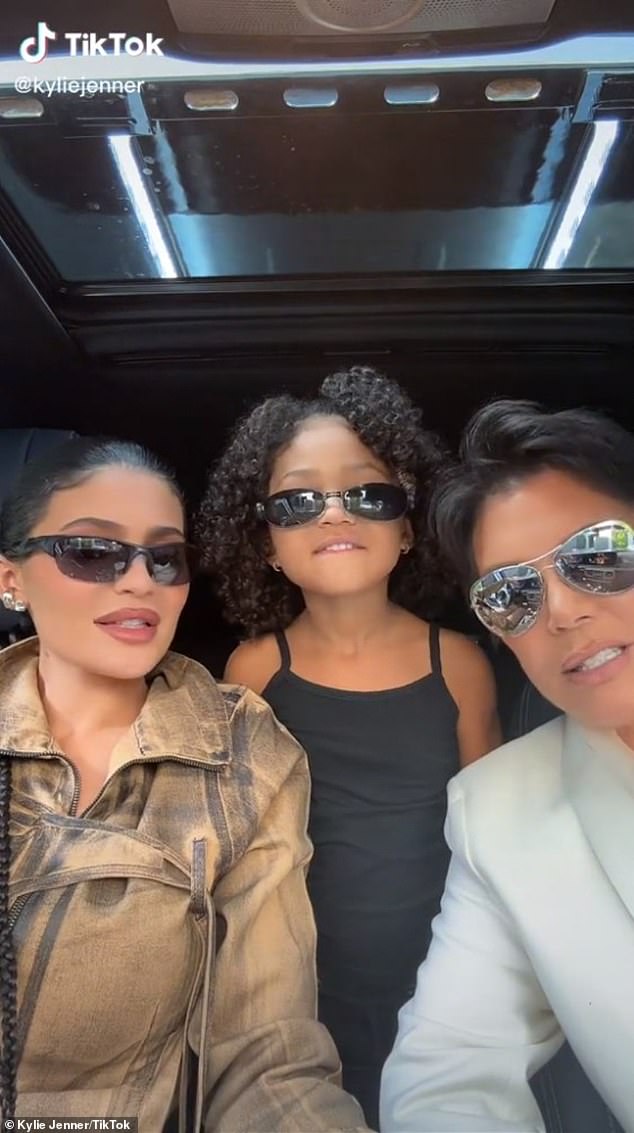 Comedic touch: Stormi and her mother never broke from their game face 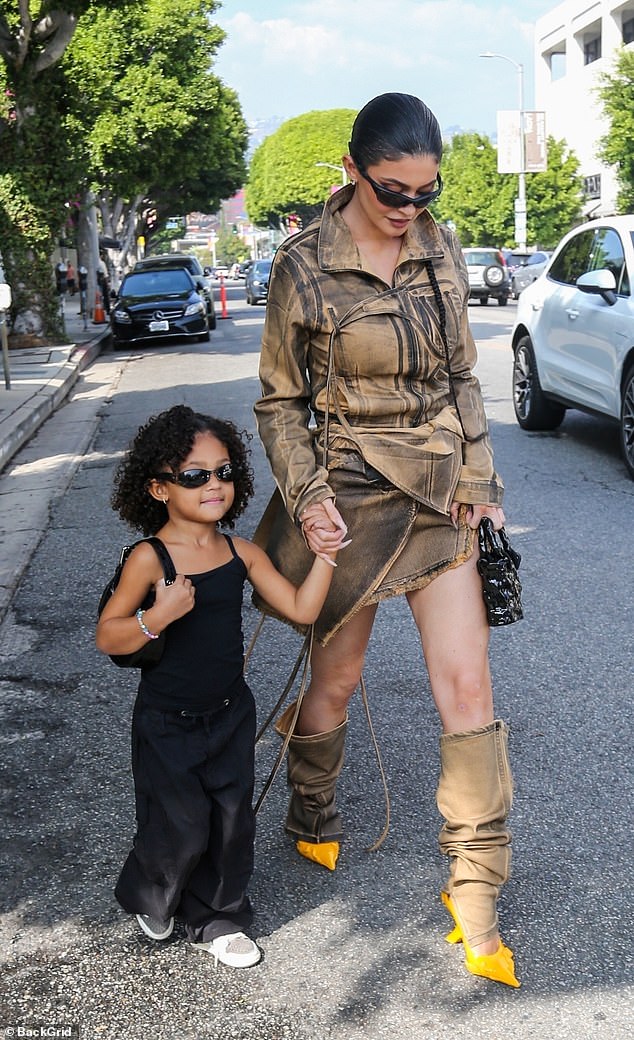 Lunchtime: Afterwards, Kylie showed off her stylish ensemble, consisting of a brown leather jacket and skirt combination, when she took Stormi to lunch at The Ivy in Beverly Hills