Kylie Jenner has announced that she is officially partnering with Adidas as their newest ambassador.

Taking to Instagram stories on Tuesday the 21-year-old makeup-mogul modeled a pair of Falcon sneakers as she hung out on a roof terrace.

‘So excited to announce that I am officially an #adidas_Ambassador #createdwithadidas @adidasoriginals’ Kylie captioned the clip.

Big news: Kylie Jenner has announced on Tuesday that she is officially an ambassador with Adidas 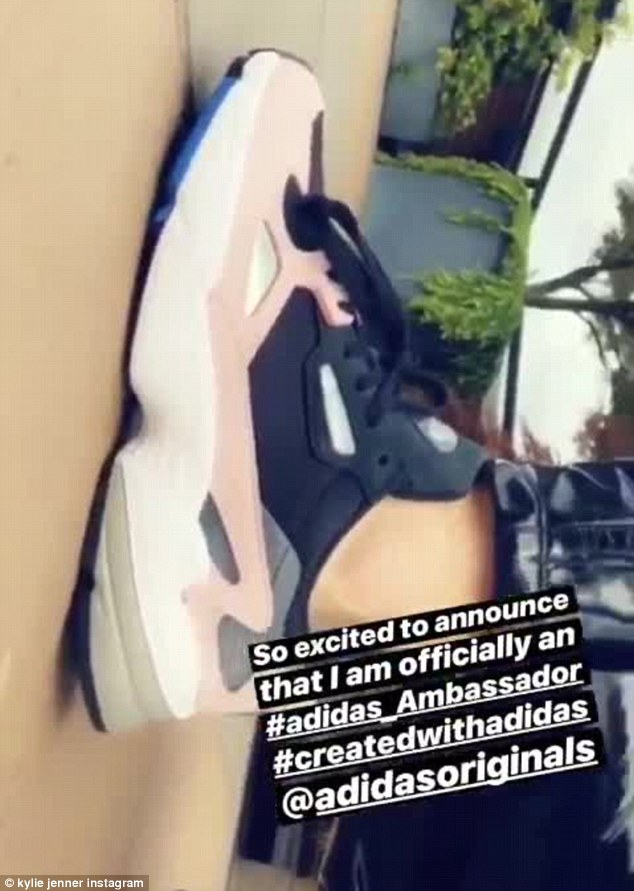 Showing off the goods: Kylie will be fronting the soon-to-be-released campaign for its Falcon sneaker

The mother-of-one wore a black tank top and tight PVC pants with her blonde locks tied back tight.

Kylie’s sister Kendall, 22, is an official ambassador for Adidas; while her brother-in-law Kanye West’s famous Yeezy line is also falls under the brand.

The KUWTK star will be fronting the soon-to-be-released campaign for its Falcon sneaker.

In a release Adidas said: ‘As a life-long fan of the brand, Kylie embodies the bold spirit of Falcon and we are pleased to announce her as the face of the campaign,’ 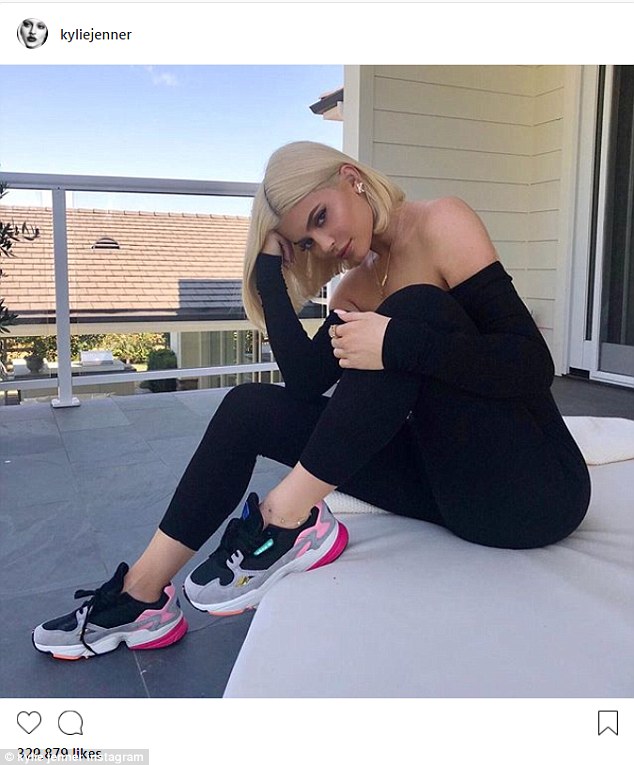 Selling: Kylie showed off some of the Adidas Falcon sneakers on Thursday before she made the announcement 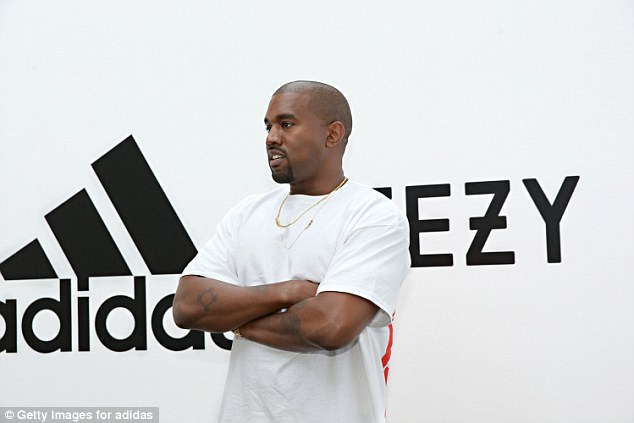 Previously Kylie caused a family divide when she signed with Puma two years ago.

Back in 2016, Kim lashed out at mother Kris for overseeing Kylie’s Puma deal, who admitted at the time she was wearing her ‘business hat’ instead of her mom one.

Kanye in particular was furious, having used his sister-in-law as a model for his Yeezy line, no doubt a sweetener in his contract negotiations with Adidas.

‘1000% there will never be a Kylie Puma anything. That’s on my family! 1000% Kylie is on Yeezy team!!!’ he tweeted at the time. ‘Puma we gone give you your measly million dollars back!!! Never try to divide the family!!!’

The same day Kylie flaunted her trim figure on Snapchat as she wore a white sports bra and black leggings and posed in front of a mirror.

The E! star has clearly snapped back into shape since she welcomed baby Stormi with boyfriend Travis Scott in February. 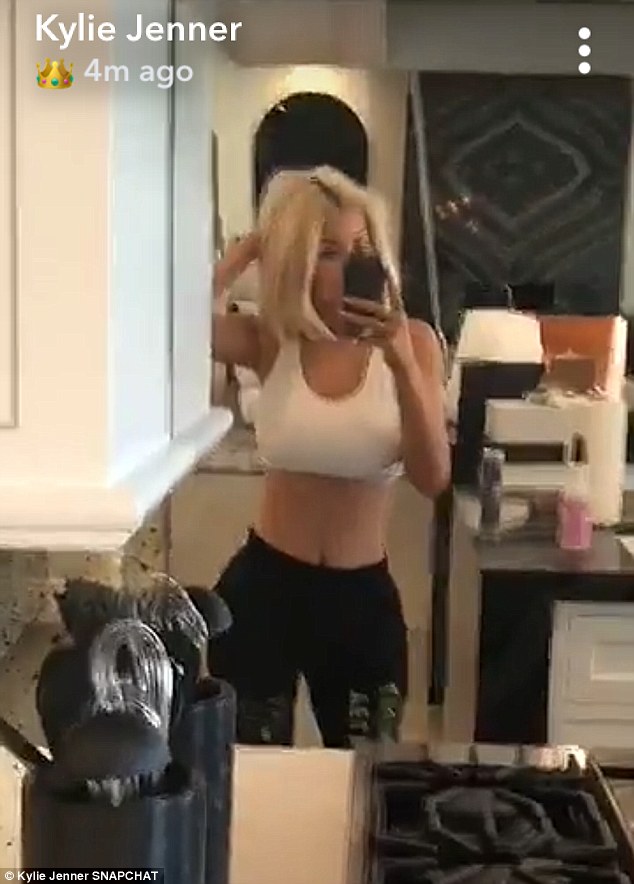 Fit and fab: Kylie flashed her taut tummy on Tuesday as she shared Snapchats of herself in tight gymwear 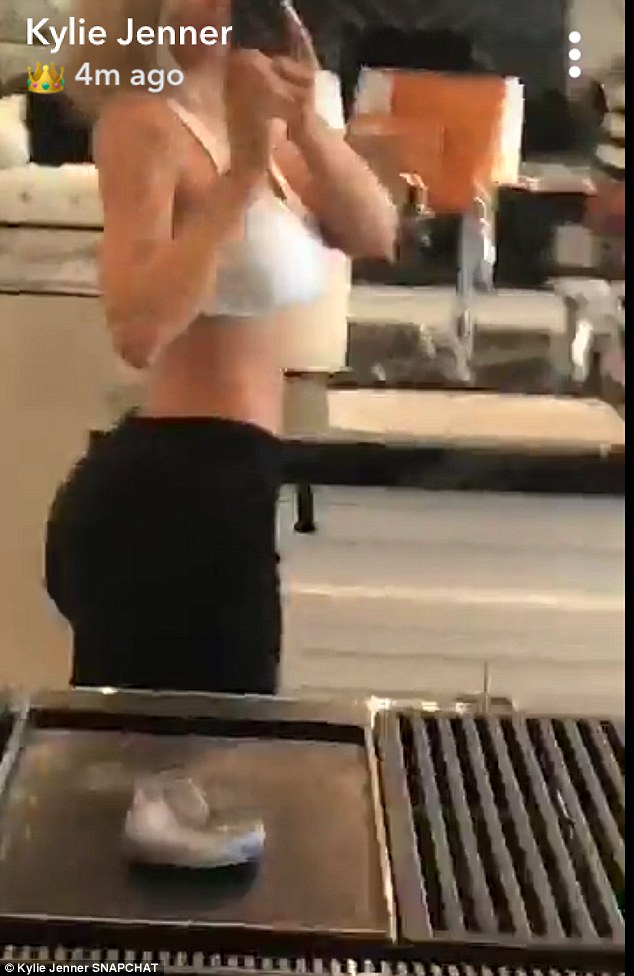