Kylie Jenner has come under fire for using a waist-training corset and promoting them as a way to ‘snap back’ after pregnancy.

On Monday, the 20-year-old new mom posted a selfie on Instagram, in which she is dressed in all black with a right waist trainer fasted around her middle. She encouraged her followers to follow suit, and even included a discount code in the post, tagged with the hashtag #ad.

Since then, critics have been slamming the reality star for promoting a negative body image and setting unattainable beauty standards.

So that’s Kylie’s secret! Jenner shared an ad for a waist-training corset on Instagram on Monday Toned tummy! The 20-year-old had amazed fans with her post-baby body, and she said the corset was the trick to changing her physique after giving birth 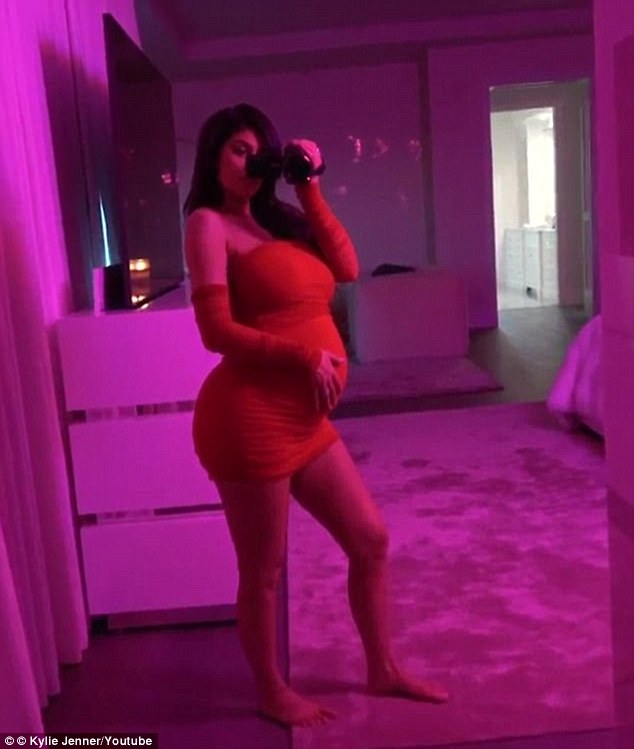 Her history: The Keeping Up With The Kardashians star welcomed her first child on February 1

Not a fan: Several people have taken to Twitter to call her out for the product push

Some fans have been shocked at how quickly Kylie’s body has snapped back since she gave birth on February 1 (while other shave pointed out that, at juts 20 years old, it’s not all that surprising).

Since then, she’s shared several snaps showing a pretty trim-looking tummy — and now she would have fans believe that’s thanks to a waist trainer.

Posting an ad for the Waist Gain Society, she wrote: ‘My girl @premadonna87 hooked me up with the @waistgangsociety snap back package.

‘Waistgang has the BEST quality snap back products. Make sure you get your package and follow @waistgangsociety to join and keep up the journey together.’

The corsets she’s shilling purport to hold a new mother’s waists in place as she recovers from the birth. They are also popular with those seeking to slim down their waist area.

But critics on social media are upset with Kylie for promoting them at all, accusing her of setting unattainable beauty standards, encouraging unhealthy practices, and making new moms who don’t ‘snap back’ as quickly as she has feel bad.

‘Kylie’s back at it selling waist trainers, this time with a fun pregnancy spin! The devil works hard but kris jenner, my friend,’ wrote one. 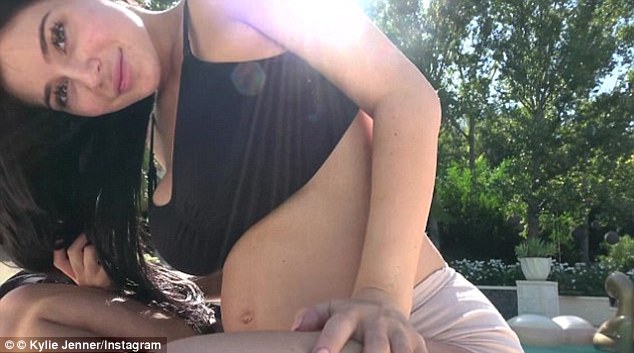 Her size: Kylie has said on Twitter that she gained 40lbs while pregnant, but then she quickly deleted her post 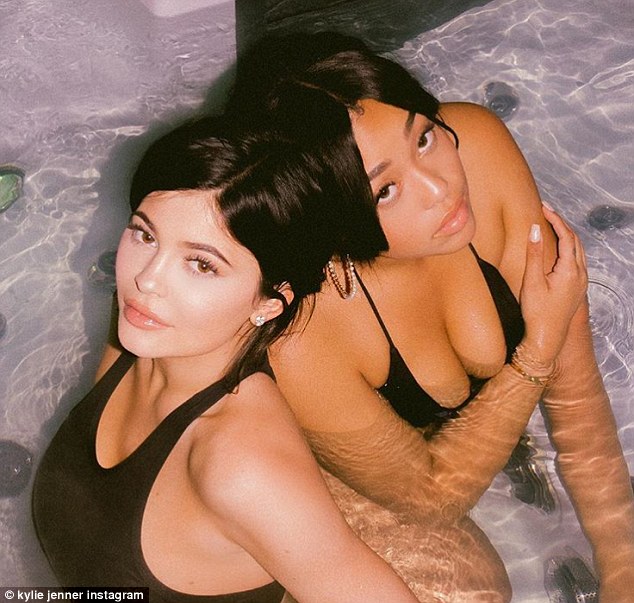 Uh-oh: Kylie, who is pictured with her best friend Jordyn Woods, has come under fire for the promotional post 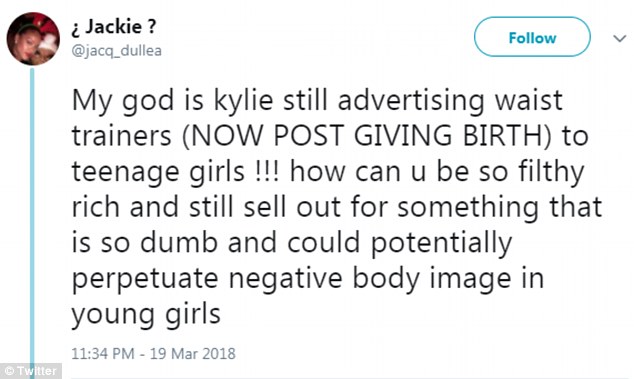 Not nice: Critics accused her of selling something that perpetuates negative body image to teenagers

Imitation is… not flattery? This woman mimicked Kylie to show her displeasure

Pepole aren’t happy that she is pushing the uncomfortable product

Not a bad thing: Some have pointed out how natural it is for a woman’s body to look different after pregnancy 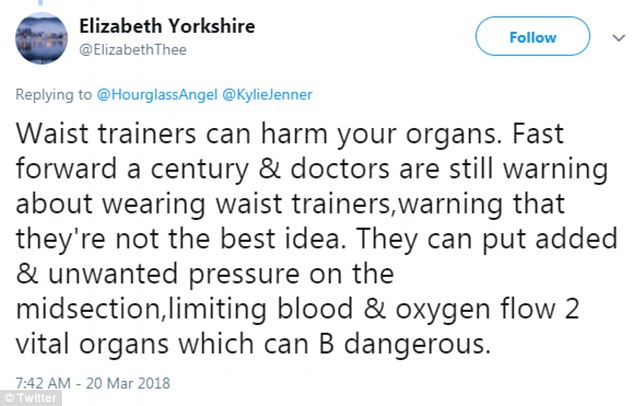 Health: Some warned about the possible dangers of waist trainers

No evidence: thers even speculated that the star has had surgery since giving birth

Priorities: This Twitter user lectured her for focusing on the wrong things after giving birth

‘My god is kylie still advertising waist trainers (NOW POST GIVING BIRTH) to teenage girls!!!’ wrote another. ‘How can u be so filthy rich and still sell out for something that is so dumb and could potentially perpetuate negative body image in young girls?’

Pretending to imitate Kylie, that Twitter user added: ‘*puts on waist trainer only to post a pic and make more money* hey teenage girls from working class families u can look like me if u too buy this trainer and squish ur organs! It will totally work!!’

‘Kylie comes back with a greedy waist trainer promotion Post. Girl this is the last thing I wanted,’ wrote yet another.

Some have even speculated that Kylie doesn’t use the waist-trainers at all, and either simply got lucky or went under the knife.

‘Is Kylie really trying to promote waist trainers when she got surgery,’ wrote one.

Yet another lectured, ‘Dear Kylie, your body is SUPPOSED to look like it does after giving birth. Stop promoting dangerous weight loss BS!!’

‘Waist trainers can harm your organs,’ one more woman chastised. ‘Fast forward a century & doctors are still warning about wearing waist trainers,warning that they’re not the best idea. 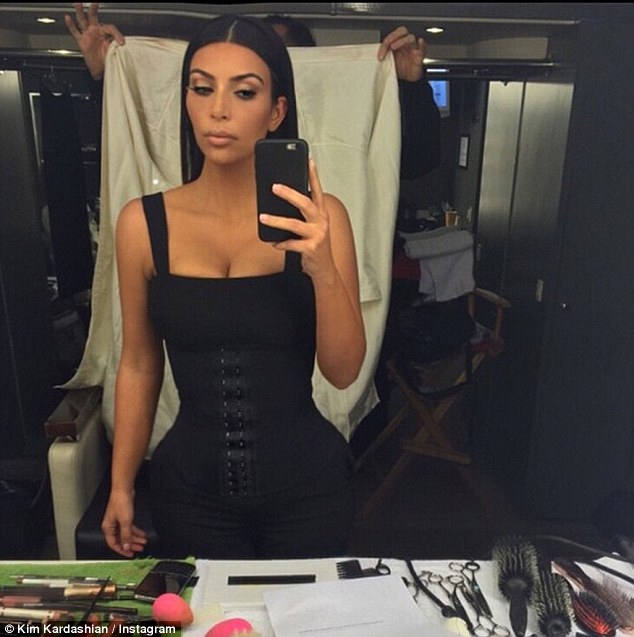 If it works: Kylie’s big sisters Kim, Kourtney, and Khloe Kardashian have all previously boasted of using waist training (Kim pictured in 2014) 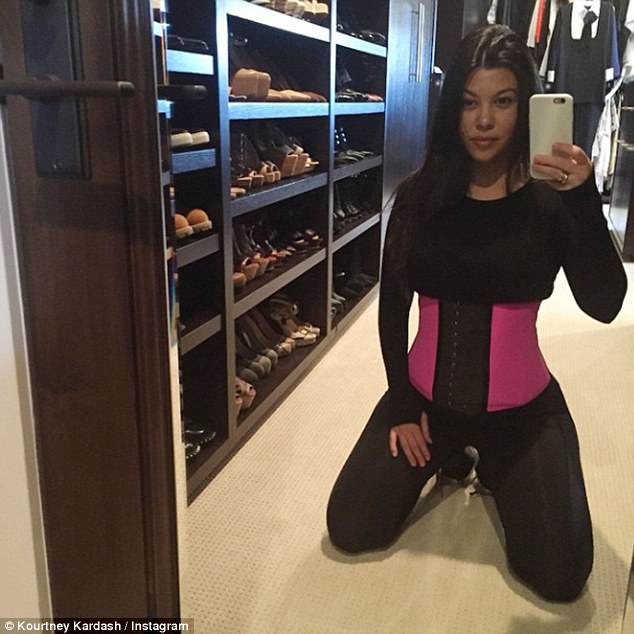 Mom’s the word: After the birth of her third child Reign, Kourtney followed suit (pictured in 2015) 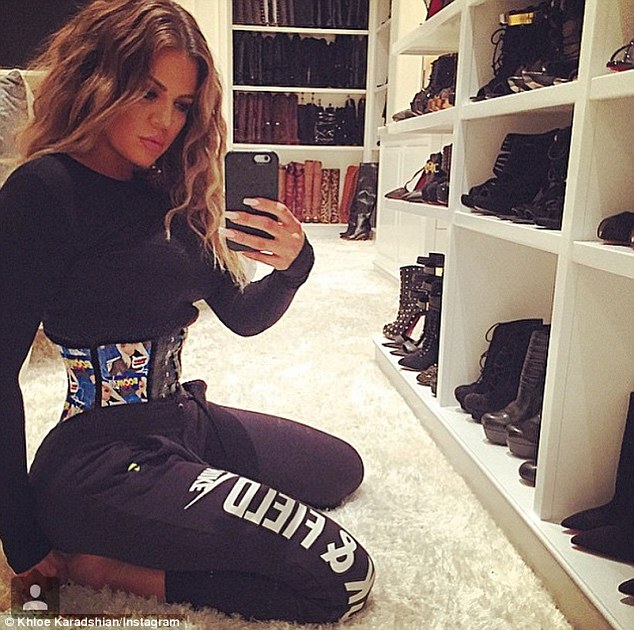 ‘They can put added & unwanted pressure on the midsection, limiting blood & oxygen flow 2 vital organs which can B dangerous.’

‘Not every new mum has money, time or help to lose weight. Being healthy & bonding with baby more important,’ wrote another critic. ‘Shameful talk by Kylie Jenner.’

Waist trainers have actually long been promoted by the Kardashian-Jenner clan, and Kylie’s big sisters Kim, Kourtney and Khloe Kardashian have all previously boasted of using the item to sculpt their hourglass figures.

In fact, Kim even used one following the birth of her daughter North in 2014, saying at the time that she wore hers for ‘several hours’ a day.

After the birth of her third child Reign, Kourtney followed suit, posing for an Instagram ad in mid-2015.

Younger sister Khloe also jumped on the bandwagon, though she obviously did no before getting pregnant.

‘Snatching my waist and looking cute all at the same time!!! I definitely feel like a superhero in this waist shaper!’ the reality star captioned her selfie back in 2015.